The options market is implying about a 4% move in either direction tomorrow, which is a bit rich to its 4qtr average one-day post-earnings move of about 1.25%

As the largest component (11%) of the SMH, the etf that tracks the semiconductor group, the stock has contributed a good bit of its 32% YTD performance, with TSM up 52%. After spending much of August and September consolidating on either side of $80, the stock has rallied nearly 20% in what looked nearly like a straight line since its late September low but has since come off a few percent. 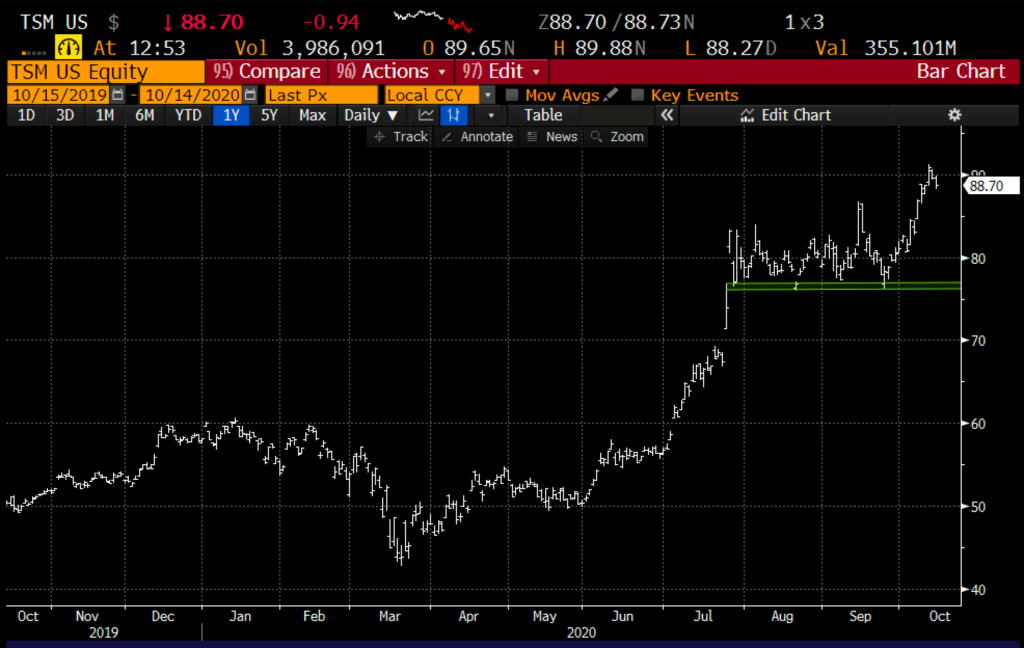 So what to expect? My friend Jared Weisfeld Tech Specialist over at Jeffries (and frequent Fast Money guest) had the following to say this morning in a note to clients:

We’re coming off an extremely strong Q3 and expectations couldn’t be higher heading into tomorrow morning after the Company crushed their initial Q3 guide (likely driven by Huawei upside ahead of the September 15th deadline). Off prior Q3 consensus, buyside was expecting revenue to grow 5% sequentially heading into the December quarter against wafers that were flattish to up small sequentially. Now off the elevated base of NT356BN, buyside is looking for something closer to 0-3% revenue growth with upside led by AMD and NVDA. The stock has been a beast, +39% YTD and pegged on highs into tomorrow’s print. Many of my conservations on TSM are now focused on: 1) incremental upside attributable to INTC outsourcing over the next few years and 2) an increasing competitive narrative coming from Samsung Foundry (and that drumbeat is getting louder with the broader Samsung/EUV relationship this morning.

My take: things are obviously firing on all cylinders, and yeah stocks that go to $92 usually go to $100, but the slightest disappointment and this stock is headed straight back to $80 in the coming days.

If you though the implied move at ~4% seemed fair, and you had a conviction that the stock would go one way or the other at least 4% over the next two trading days, then it would make sense to define your risk and buy a near or at the money call or put in Oct 16th expiration, for instance:

Disclaimer: A quick reminder, you need to get a lot of things right when expressing short-term directional views with options into events, first and foremost direction, then magnitude of the move, and of course timing. IN weeklies, get the direction wrong and this trade will lose most of its value by lunchtime tomorrow.