Not surprisingly, Delta Airlines (DAL) this morning reported disappointing Q3 results and offered little to comfort to investors that the company would return to a “normalized revenue environment” any time soon, per Barron’s:

Delta said operating revenue in the quarter was $2.6 billion, down 79% compared with the quarter ending in September 2019. The sales result missed consensus estimates for revenue of $3 billion, according to FactSet. The airline reported an adjusted pretax loss of nearly $2.6 billion, slightly larger than the consensus estimate for a pretax loss of $2.5 billion. Passenger revenue declined 83% to $1.9 billion, missing estimates for $2.2 billion. And the earnings per share loss came in at $3.30, missing estimates for a loss of $3.10

But it is likely these datapoints keeping the stock from totally getting creamed (down only 3% as I write):

The company said it had $21.6 billion in cash and available funding on hand, and that it burned an average of $24 million a day in cash during the quarter. The burn rate declined to $18 million a day in September, an improvement from June’s $27 million a day.

Delta has cut costs sharply. CFO Paul Jacobson said the airline cut operating expenses by more than 50% in the quarter, despite flying 23% more capacity. Nonetheless, Delta also took some large accounting charges, including $3.1 billion for separation agreements and early retirements for employees, and $2.2 billion related to retirements of older aircraft.

Your guess is as good as mine when we get back to 2019 levels of travel, but it is worth noting that the group’s ability to maintain its uptrend from the March lows making a series of higher lows suggests that there is some long-term optimism, but the only problem is that those higher lows since June have come with a series of lower highs, likely reflecting the lack of near-term visibility and optimism. The one year chart below shows the building tension, with the stock’s 100-day moving average matching the uptrend and its 200-day moving average matching its downtrend, and just above its 50-day. To my eye that looks like support down about $2 and resistance about $3, but make no mistake, this stock is gonna break hard one way or the other in the coming weeks. 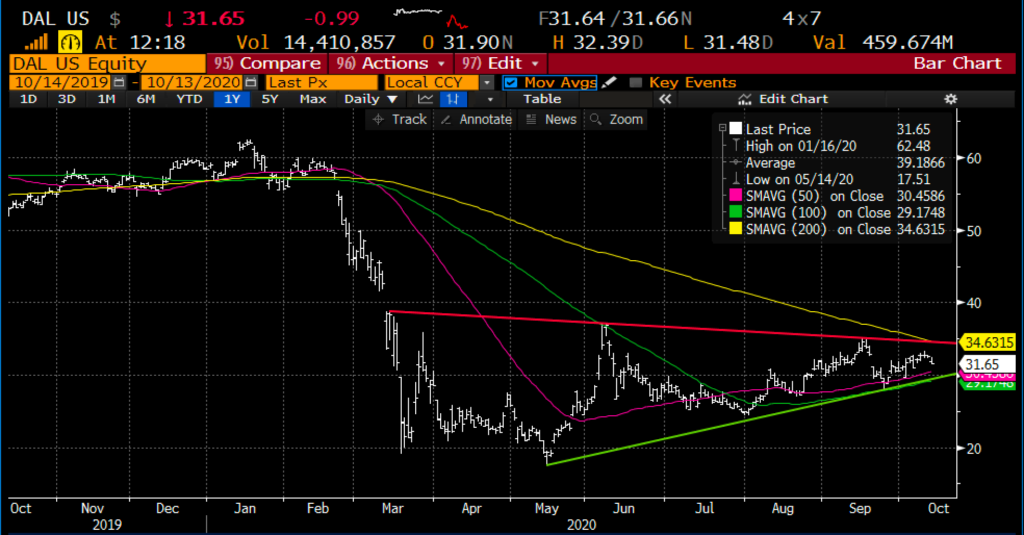 Let’s consider the headlines that would make the stock break hard one way or the other:

First, some form of bailout from the government that would not be dilutive to shareholders, which the industry is asking for in an effort to keep airline employees in their jobs while they are not needed due to lack of demand.  This would likely be short-term in nature and with strings attached that further cash would come with equity stakes. A broader stimulus bill would also help the demand equation.

Obviously, a viable and plentiful vaccine sooner than expected and the stock rips as there is little doubt there is pent-up demand for air travel both for vacation and business.

If I were inclined to play for a material breakout in the near year I might consider a call calendar, selling short-dated out of the money call premium and using the proceeds to help finance the purchase of longer-dated calls of the same strike, for instance:

The idea situation is that the stock trends towards 35 between now and Nov expiration and the short Nov call expires worthless below 35 or is covered for a small amount prior to expiration, leaving long the Jan 35 call which has gained in value as the delta of the option has increased offsetting the decay over the next month. At which time, depending on where the stock is trading one could turn again into a call calendar, further reducing the premium at risk, or turn into a vertical spread by selling a higher strike call in Jan. The max risk of this trade idea is the $1.45 in premium at risk.

If you thought that today’s news was only ok on the surface and that the company will need to tap dilutive funds as visibility on both vaccine and demand will be limited for far longer than optimists expect, then the stock could be on its way back near the March lows just below $20, then consider put spreads, for instance:

Rationale: this trade idea risks 8% of the stock price, has a break-even down 13% and gains of up to 24% if the stock is down 37% in 3 months. While that seems like a lot, if we were to have a second wave of the virus, investors would shoot first and ask questions later in groups like airlines. The options market is suggesting there is about a 28% chance that this trade idea will be break-even on Jan expiration, a 20% chance it will be a double worth $5 and only about a 9% chance it will be worth $7.50 at $20 on Jan expiration. This is NOT a high probability trade idea, but it is one with defined risk for those with conviction and highlights just how hard it can be to trade options directional with long premium trade structures with short-dated options prices as elevated as they are in DAL. Despite being down considerably from the March highs, 30-day at the money implied volatility at 65% is pricing in moves of 3-5% a day, more than 3x the price movement expected in January. 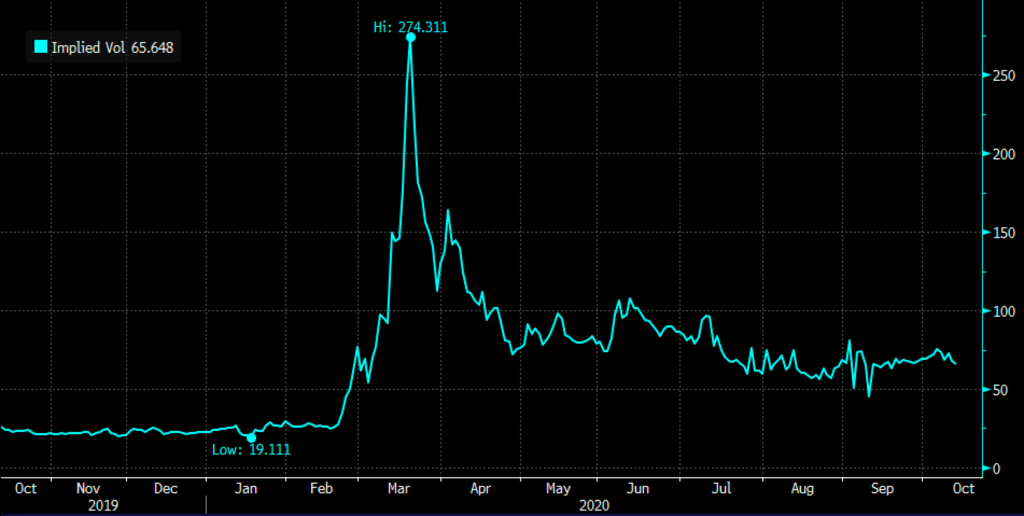