Tomorrow before the open J.P. Morgan (JPM) and Citigroup (C) will both report their Q3 results before the open, kicking off what will be one of the most-watched earnings periods in recent memory as investors desperately search for any clues on a sustained recovery. JPM’s commentary might be some of the most important in the S&P 500, but I suspect it will contain lots of caveats about the continuation of easy monetary policy and another round of fiscal stimulus.

The options market is implying about a $3.70 move for JPM between now and Friday’s close, or about 3.5%, which is nearly double the 1.8% average one-day post-earnings move over the last four quarters.

Shares of JPM are down 27% on the year, having just rallied 12% since Sept 28th when it was trading at two-month lows having bounced off of the uptrend from its March lows. The stock is still down 27% from its 52-week and all-time highs made on Jan 2nd, with near term support near it’s 200-day moving average around $105, which also happens to be near its Aug and Sept highs: 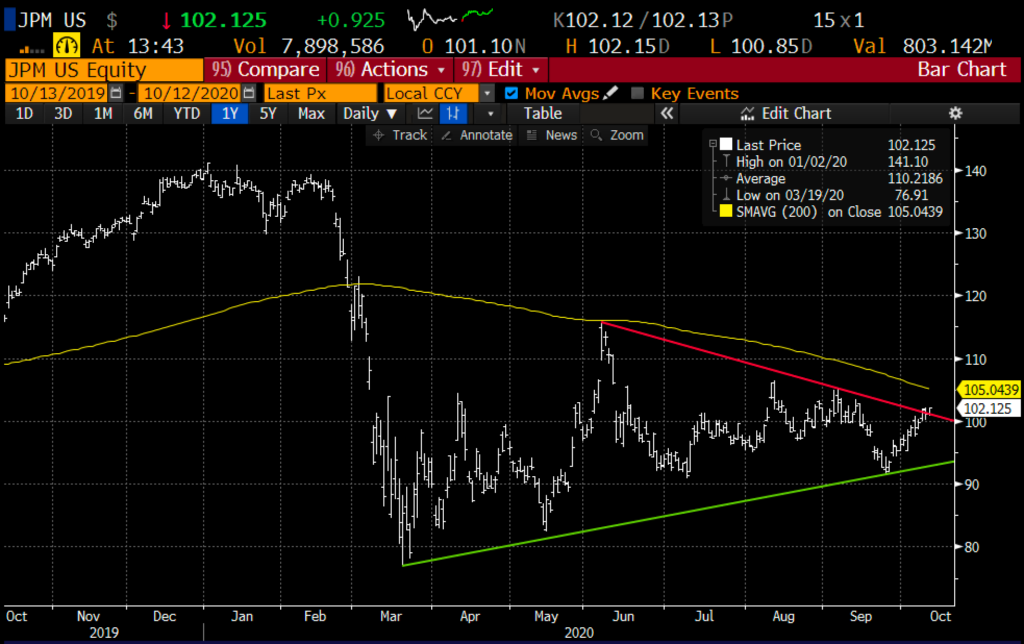 Banks like JPM have been accruing large reserves for the last two quarters ahead of what they expected to be large credit defaults and bankruptcies resulting from the lockdowns which have weighed on profitability. Profitability has also been negatively impacted by the Fed’s lowering of rates to zero which has pressured net interest margins. While under-writing and capital markets activity has been stellar, the lapse in further fiscal stimulus could result in a tempering of consumer confidence at a time when the pace of jobs being added back to the economy has decelerated while continuing weekly jobless claims have remained well bid. Also top of mind for investors has been the Fed’s restrictions on share buybacks which have weighed on investor sentiment.

That last bit is important, if investors are looking to play catch up in stocks and groups that have underperformed they often feel they can get the most bang for their buck in unloved groups. Banks and Energy clearly fit that mindset, but they also reflect the headwinds that remain in an economy that will have scars for months if not years to come once the pandemic is controlled and it presupposes that we are near controlling the virus.

So what’s the trade? With the market ripping, and the SPX now less than 1.5% from its all-time high, investors are clearly pricing in a stimulus deal to be announced any minute, up 2% today as I write, and up 5.3% this month alone. If you thought better than expected results and commentary from JPM would add fuel to the market fire and that JPM would be headed back to its June highs near $115 in the coming days than paying $2 for the Oct 16th 102 call (vs stock $102.30) feels like a good risk-reward, risking about 2% of the stock price for a trade that is already slightly in the mone with a break-even up at $104, or 1.7% from the current level.