that Advanced Micro Devices is in advanced talks to acquire Xilinx in a deal that could be valued at more than $30 billion. That is assuming Xilinx is able to land a decent premium to its unaffected market value of a little under $26 billion. The deal would pair two chip makers that typically work at very different ends of the market but have both been targeting data centers lately. Both also depend on the cutting-edge fabrication processes of Taiwan Semiconductor Manufacturing, or TSMC, to actually produce their chips.

My friend Jared Weiselfd, Tech Specialist at Jeffries in a note to clients this morning was very enthusiastic about the potential combination:

Does this deal make strategic sense? Yes. In my view, this is one of the most brilliant strategic deals for an acquirer that I can remember in a long time. While some are saying this muddles the AMD narrative a bit, I completely disagree. This accelerates AMD’s data center strategy, expands their TAM outside of traditional compute into Network Infrastructure and Automotive, and gives them the scale necessary to compete in a world where’s it’s becoming increasingly difficult and expensive to follow the cadence of Moore’s Law. This also increases the revenue base of AMD by ~31%, broadening their exposure significantly, and is substantially accretive from a gross margin and net income standpoint. And look at the strategic path of every other successful digital company– it’s no coincidence that data center, network infrastructure, and automotive are key end markets for the digital complex.

Is this deal financially accretive? Massively. Lisa Su has proven herself as she’s executed on a product roadmap that has facilitated significant market share gains and now she has the currency to execute with shares +89% YTD and a >$100BN market cap. Assuming an all-stock deal (why wouldn’t you if you’re AMD, assuming XLNX would be willing to take all stock), it’s about 25% accretive given the relative multiples and the significant synergy potential. I’m also assuming just a 15% reduction to XLNX COGS + Operating margins, call it ~$325mm, which is likely quite conservative given XLNX’s status as a serial over-spender. Not to mention the incremental leverage that AMD will now have from a foundry/TSM perspective – added scale should help from a wafer pricing standpoint. And the go forward entity will be incredibly well capitalized with almost $2BN in net cash assuming a 100% stock deal. It also helps that AMD, a non-GAAP reporter, would be acquiring a company that includes Stock-Based Comp from an Earnings standpoint, so get some optical accretion there as well. And the team at AMD is probably pretty happy that ADI chose to finance MXIM with 100% equity; that certainly provides some cover to help justify an all stock deal and maintain balance sheet flexibility, especially since we’re in the midst of a global pandemic.

Shares of XLNX gapped up 16.5% on the open and has since come in a little bit as the market cap has settled into the speculated $30 million deal price or a little less than 10x sales: 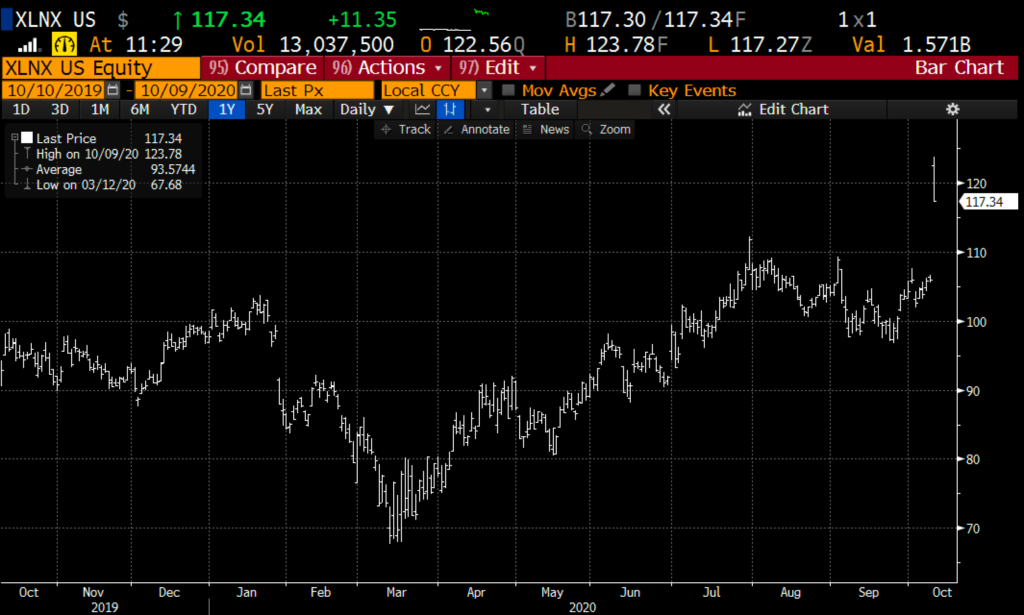 While that multiple to sales looks more like an m&a premium for a much higher software company, it is worth noting that AMD trades at about 11x its current year sales, and many large semiconductor takeovers have happened at a higher multiple to sales, including the recently announced deal by Nvidia (NVDA) to pay $41 billion or 20x sales to Softbank for their Arm Holdings division which they acquired four years ago for $32 Billion. Obviously, other bidders could emerge causing a higher premium.

I would also note that XLNX is 20% below its all-time high made in April 2019 and if I were the CEO and Board, $140, the prior high would be the price in which I sell! 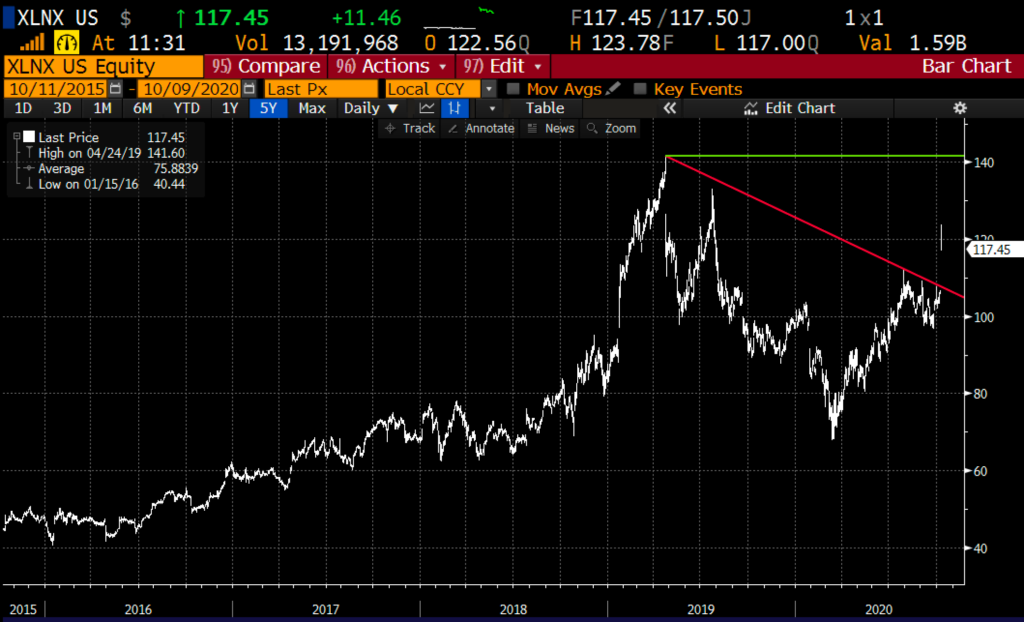 If I thought there was limited near-term downside in the stock given the high likelihood that where there is smoke there is fire, and maybe another bidder then I might consider a risk reversal, selling a near-dated downside put and using the proceeds to buy a longer-dated upside call, and looking to do for a low premium outlay.

If the stock is between 105 and 130 the trade expires worthless. On a mark to market basis, the trade will show profits as it gets closer to the long call strike and wills how losses as the stock moves closer to the short put strike.

The worst-case scenario for a trade like this is that the stock is well below the short put strike, down 12, or about 10% from current levels on Nov expiration. The best case is that you have gains above $130, or about 11% higher, for no initial cost.

Other risks to a trade like this are that the deal price might look higher, but as Jared said above, if the deal is more AMD or acquirer stock, and investors don’t like the deal or the price and sell the acquirer’s stock, then XLNX would go down inline with the ratio of the takeover bid.

OR for those who are long XLNX, and think the uncertainty offers the potential o add some added yield to the stock you could also sell the Nov 130 call against your long stock position (1 call short vs 100 shares long) and take in $2.75 in a little more than a month, making your call-away level up at $132.75, f the stock is below $130 on Nov expiration you would receive all of that premium, BUT it would cap any gains above that level, so in some ways the opposite of the idea detailed above, but if you are long already then you are coming at this situation with a different mindset.

Just some stuff to chew on.