Shortly after the open today, I filmed my weekly In The Money segment with Fidelity Investments where we quickly discussed the market volatility this past month and what to expect as we head into Q4. 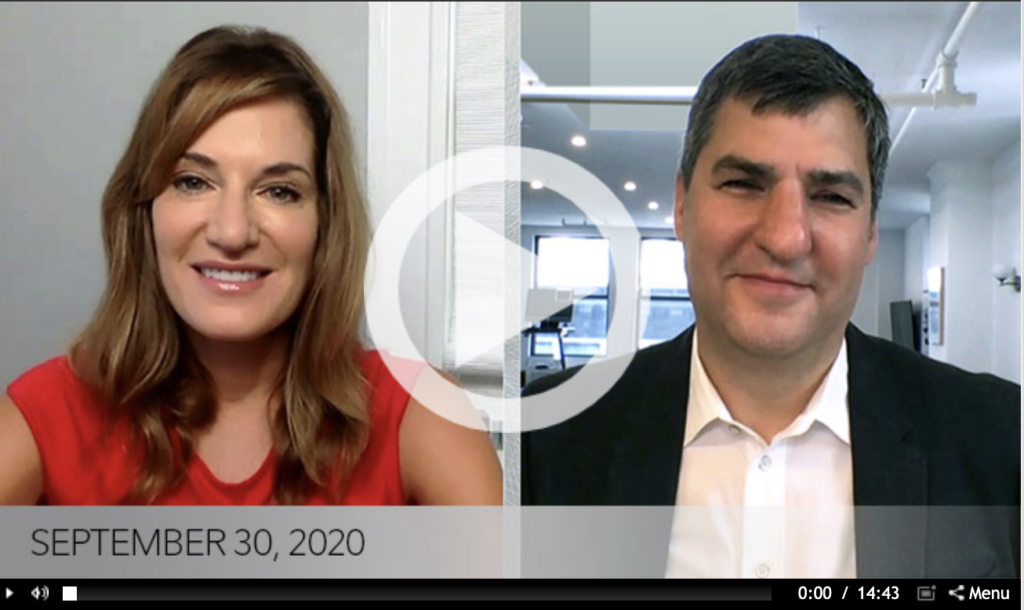 I highlighted the S&P 500’s (SPX) recent range with what I deem to be important near-term technical resistance at 3400, just above the February high and technical support down near the recent low above 3200: 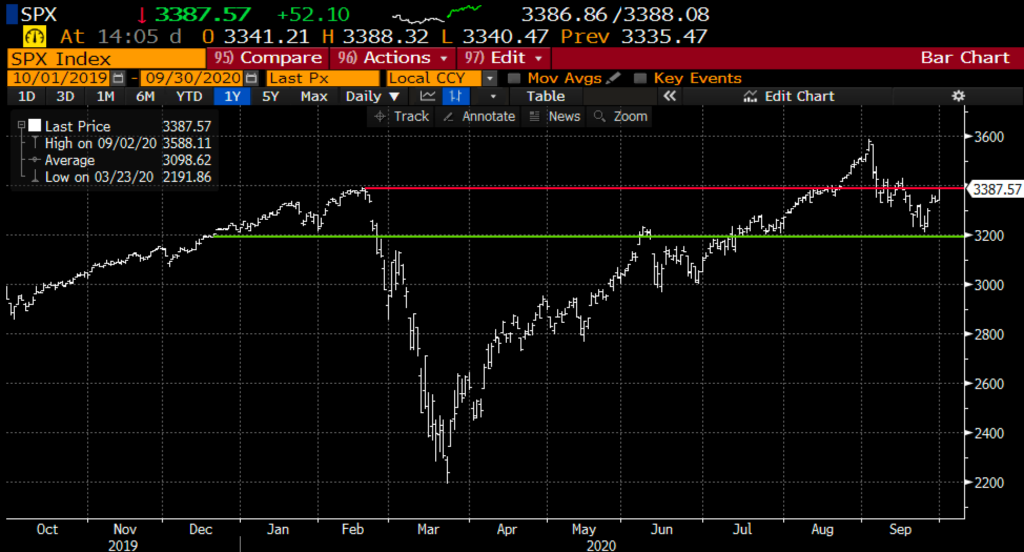 Since recording, the S&P 500 has rallied 50 points, reversing an overnight decline, approaching that near term resistance level:.. intraday we just failed at that level on headlines from D.C. suggesting that the House and the Senate are not close on another stimulus package: 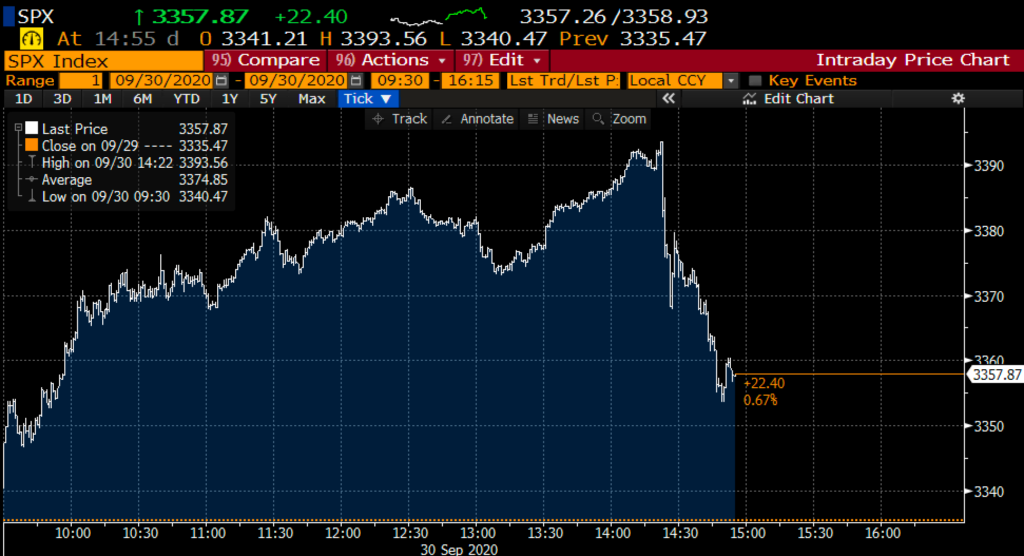 The volatility in September, which at once reached a 10% peak to trough decline in the SPX had a lot to do with the lack of confidence in further fiscal stimulus prior to the election, and the potential for further virus disruptions to put pressure on the U.S. consumer at a time where more than 25 million Americans are getting some sort of unemployment aid.

We pivoted to a couple of trade ideas, one on Deere (DE) where investors are clearly pricing in best case economic recovery scenarios and one in Disney (DIS) where there remains considerable strain on many of their business lines as virus restrictions caused them to lay-off, 28,000 workers, yesterday, or more than 10% of their entire workforce.

On DE, the stock is up 100% from the March lows, and 28% on the year, trading at a fairly rich multiple of earnings that implies a new peak in eps in 2021, and the stock trades well above a market multiple this year and at nearly 22x next. 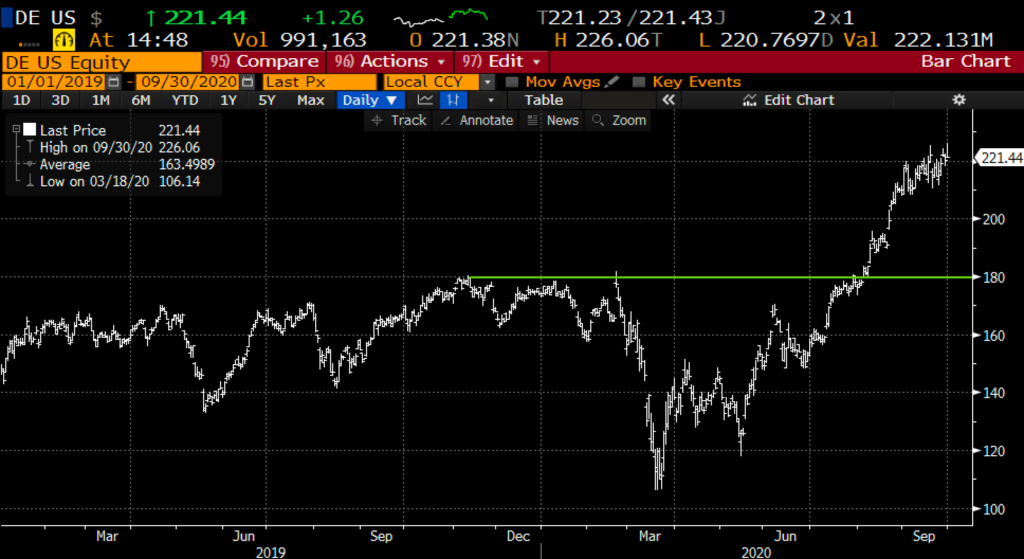 The slightest hiccup in the recovery of the global economy and this stock will be headed back towards $180 over the next couple of months in my opinion. Here was how I might play for such an event using options to define my risk:

As stated above and in the video, there are a lot of reasons why DIS’s stock has not kept pace with the market, down about 14% on the year. Last night’s layoff suggests the company is settling into the reality that it will take a while to get all of their businesses back to pre-pandemic levels and they will need to cut costs dramatically until they have more visibility. DIS is the sort of stock that makes sense to me to average into a long position as it is likely to continue to move side-aways until there is more visibility on vaccine timelines, but when customers can go back to their parks safely, and studios can start making movies again, and people can go back to movie theaters, and sports get back to more normal schedules, then investors will buy first and ask questions later.

Here was the trade idea when the stock was trading near $125, with the goal of playing for a late-year / early 2021 breakout above recent technical resistance: 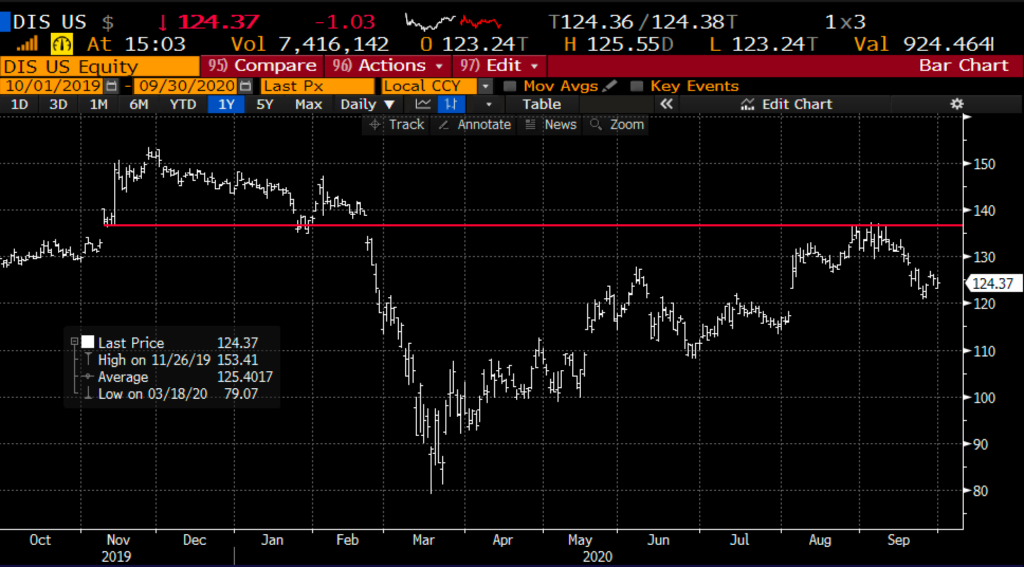 Lastly, we looked back on a Bullish trade idea in shares of Gilead (GILD) from August 26th:

Now the stock is $63 and the Nov 65 call is $2.20, nearly half the original premium, makes sense to start considering our options so to speak. We want to use a 50% premium stop on long premium directional trade ideas, but this stock has bounced on numerous times over the last two years from the current levels., so let’s keep a close eye on it, a bounce might give us the opportunity to wiggle out of this position. 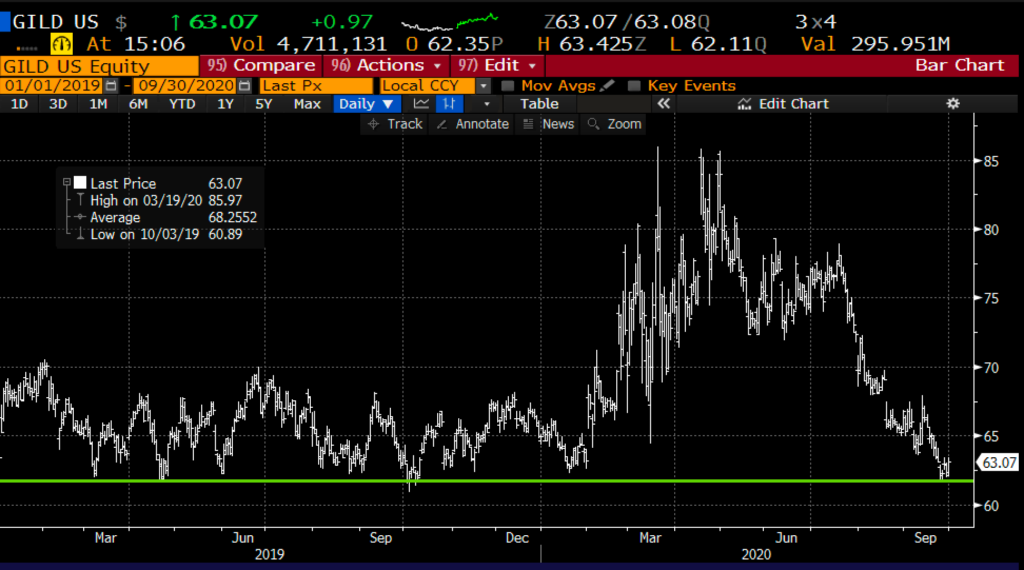