Regular readers of Risk Reversal and viewers of CNBC (watch here and here) probably know where I stand on a coronavirus vaccine in 2020, NO ONE will be taking one this year, not one where the trials were fast-tracked and might only prove efficacy but fail to account for the potential negative side effects, BUT certainly not one who’s approval was sped up in time for a pre-election announcement by a president who refused to warn the American people about the severity of the virus when there was still time to stop its spread back in February.

The good news is that our government and those around the world are throwing tens of billions of dollars at the development of vaccines, and there are very likely to be more than one that works and is approved at record speeds, but not one before the first Tuesday of November.

Earlier this week AstraZeneca (AZN) stopped their late-stage trial one a participant got very sick, but there are others from Moderna, Pfizer, and Johnson & Johnson to name a few that are moving along smartly.

Next week Pfizer (PFE) will hold their first analyst day in a decade on Sept 15th, and I suspect at the very least they will have some positives things to say about their intentions to create the winning vaccine but little news on its development. The real story is going to be about their pipeline and any positive vaccine news will be merely additive as the results of trials are likely out of their hands anyway at this point.

Shares of PFE got a boost earlier in the summer on positive vaccine news, rallying in July from $32 to just below $40 where it seemingly made a near-term double top: 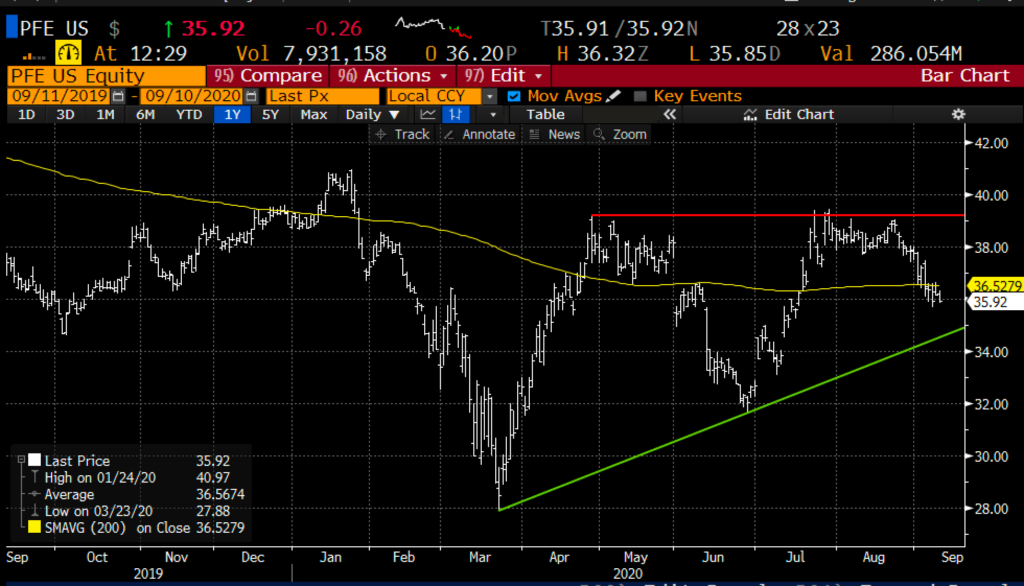 The stock is approaching the uptrend from the March lows near $35 which could be a good entry on the long side if you thought next week’s meeting could be a positive catalyst.

It might be a little early to position for this event, but with the stock trading at $35.85 the Sept 18th 36 calls is offered at 55 cents, which seems pretty reasonable, but I think it makes sense to look at this on Monday prior to analyst meeting for the potential of an earnings pre-announcement? But this is a good example of waiting for a trade to come to you, it would be a mistake to the position now and have the stock go back to the uptrend and the 36 call be way too far out the money.

Let’s check back on this Monday.