Guy and I hope that you had a great long holiday weekend. We are back with The Set-Up where we discuss the violent sell-off late last week in tech stocks, we debate whether this summer’s price action was a blow-off top after a massive rally that was largely predicated on unprecedented liquidity provided by the Fed and U.S. Treasury which led to the sort of multiple expansion that has not been seen in 20 years in market leaders. We also discussed the rotation into bank stocks and industrials Friday afternoon and Apple and Tesla’s afternoon heroics to close up in the day after being down big in the morning.

Watch our discussion by clicking below.

Last week’s late week sell-off was little more than a blip for the S&P 500 (SPX). But from a technical perspective it is below the uptrend from the March closing low, with NO support until 3200, then 3000 just below its 200-day moving average: 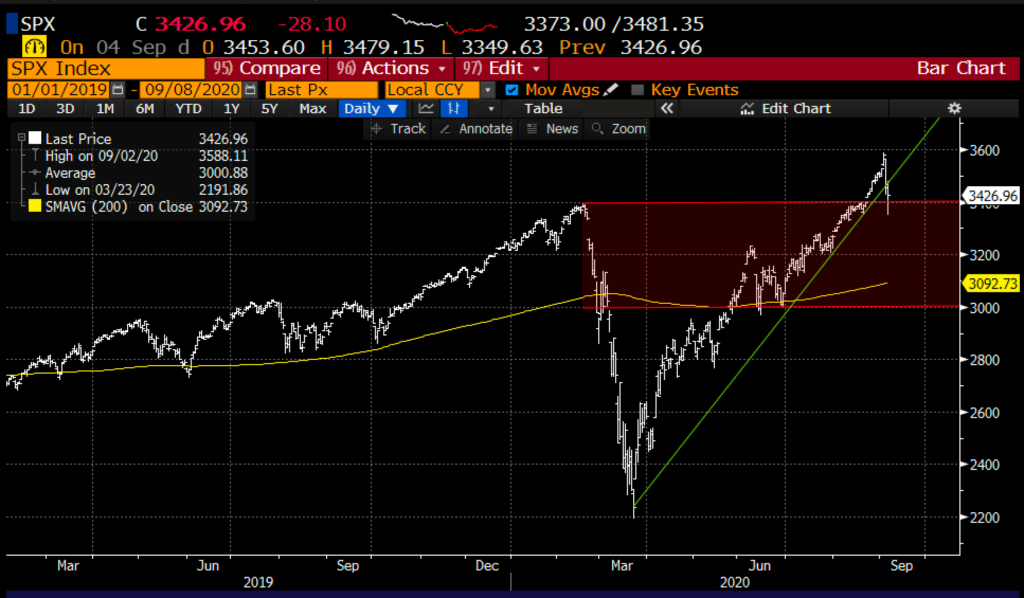 The Nasdaq 100 (QQQ) closed Friday well off of its lows with a late-day rally in some large names like AAPL, but still closed at a precarious technical spot: 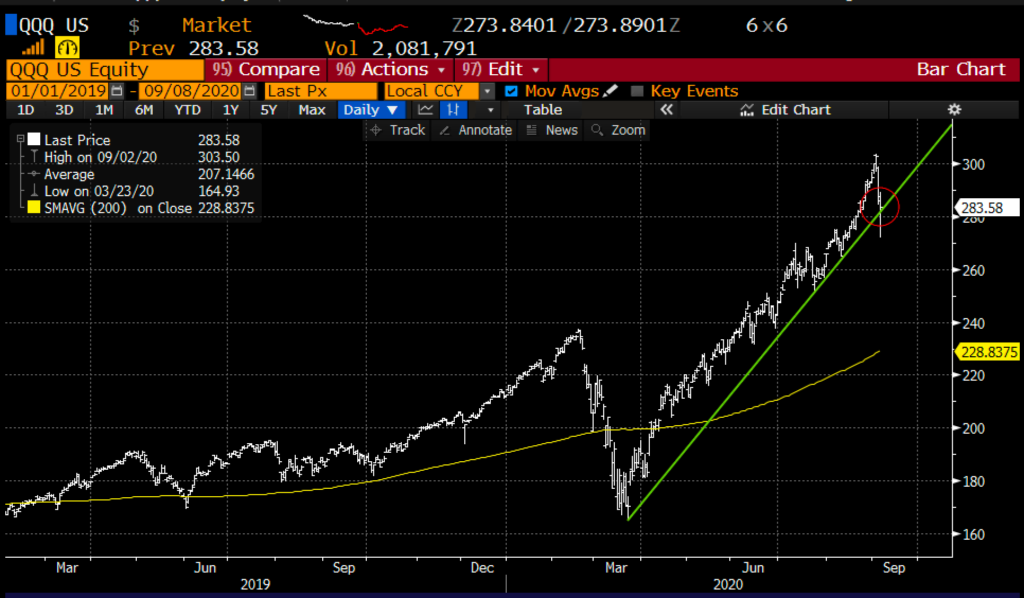 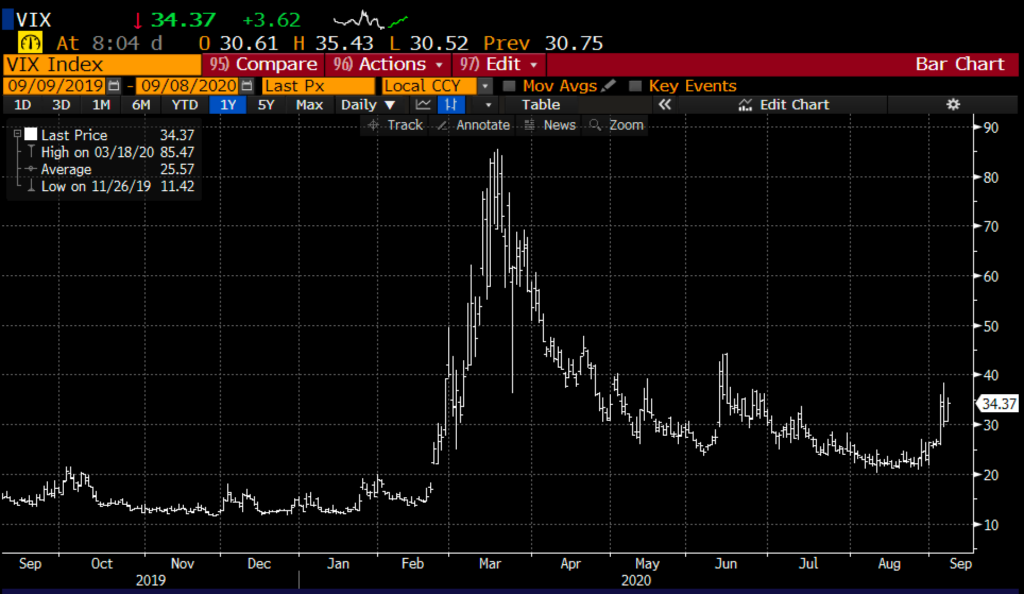 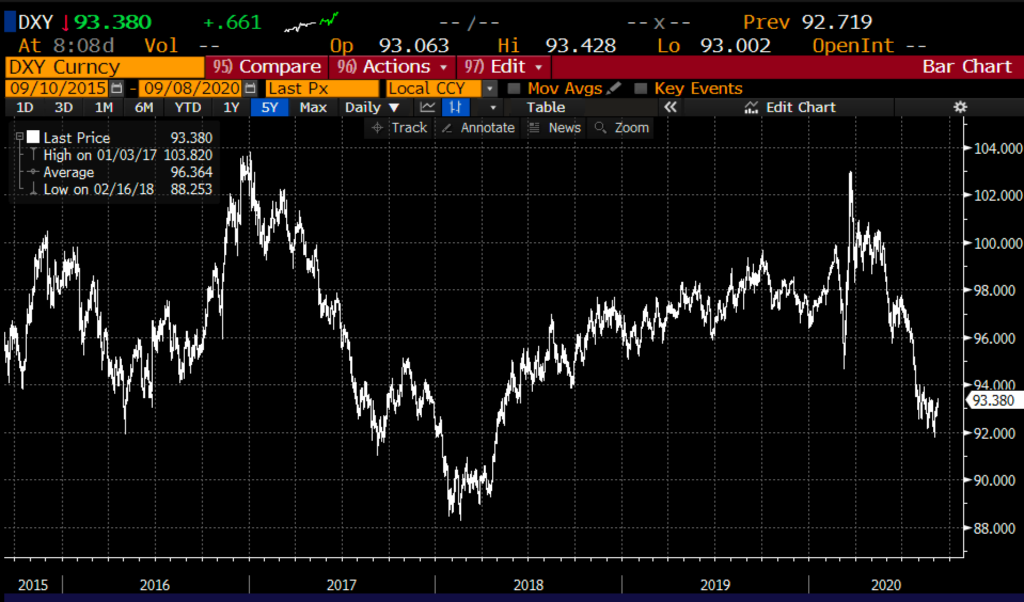 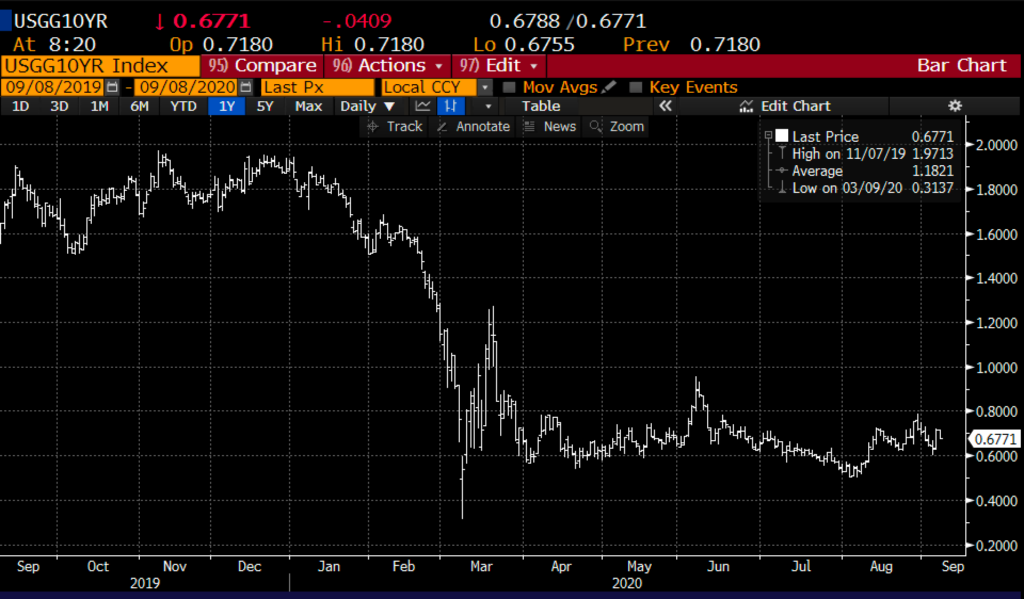 Apple (AAPL): Sometimes it is as easy as X marking the spot, $100 is the gap level from its earnings, would be a 27% decline from last week’s highs, $95 where the stock was trading prior to their FQ3 results would mark at 31% peak to trough decline. 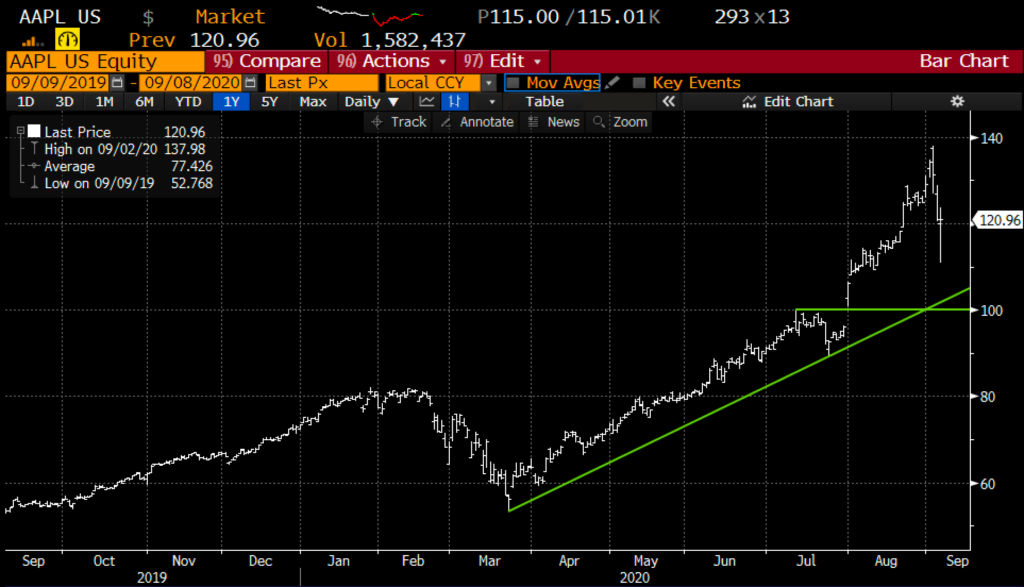 In the last eight years AAPL has had four peak to trough declines of over 30% from an all-time high which averaged about 37%, I suspect it is not different this time: 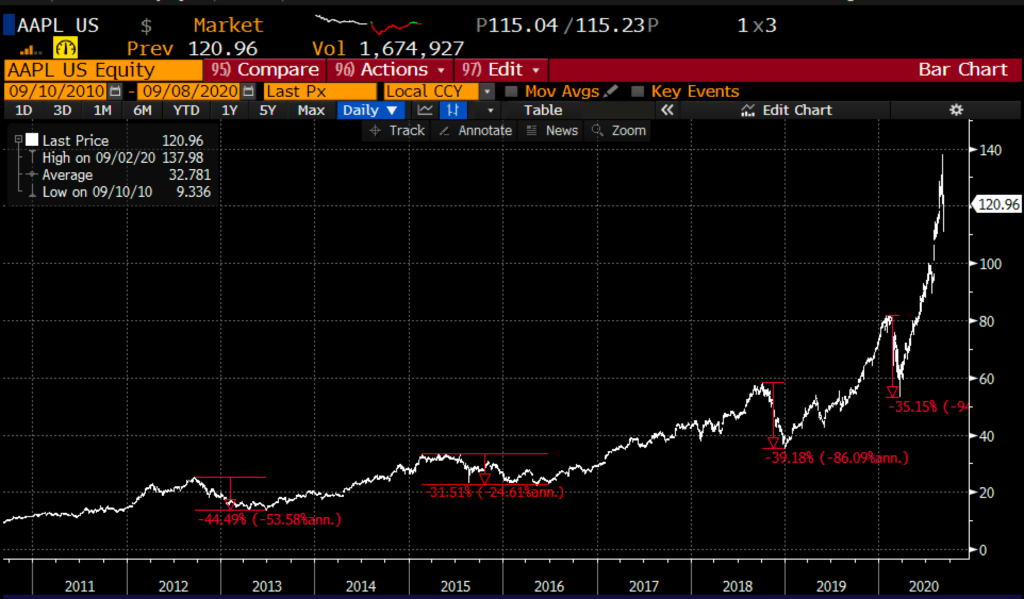 Bank stocks and industrials showed very good relative strength on Friday, both desperately trying to hold on above their uptrend from their March lows: 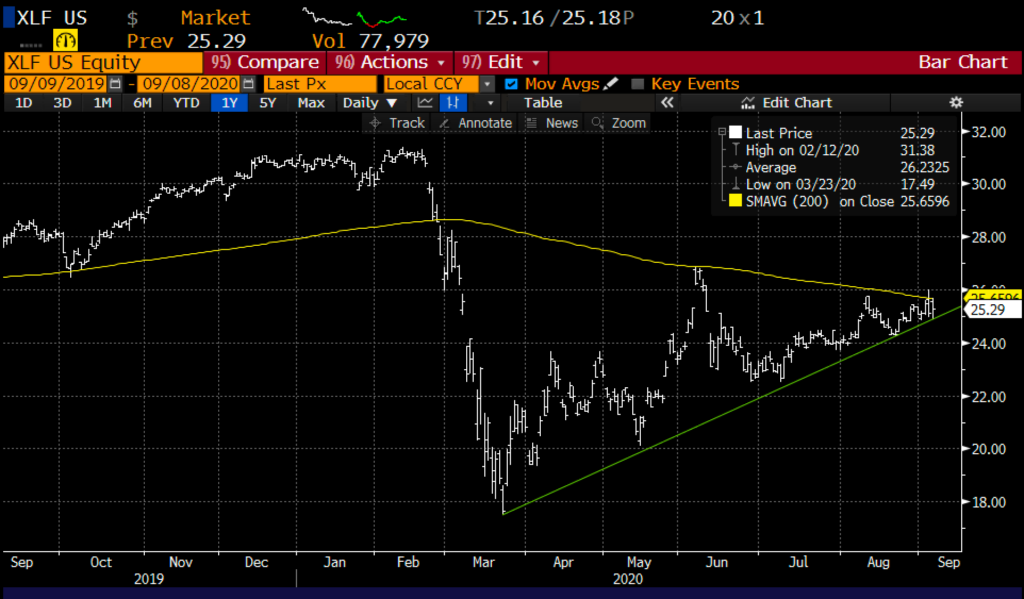 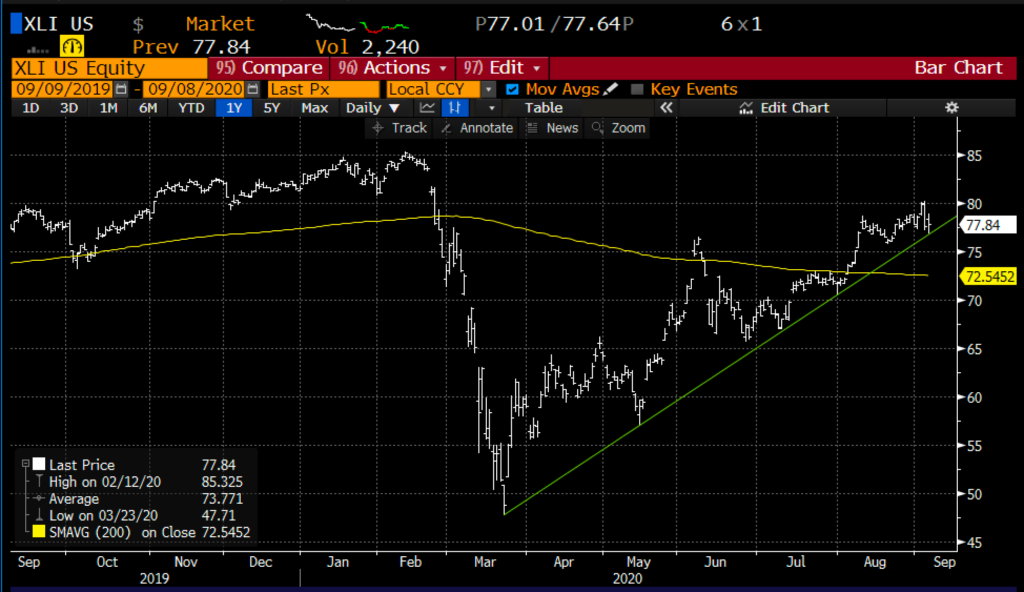 Here are a few more things we are looking at this morning:

Our friend Tom Lee of Fundstrat remains little fazed by last week’s decline and points to the cash that remains on the sidelines waiting to enter the market on any weakness: 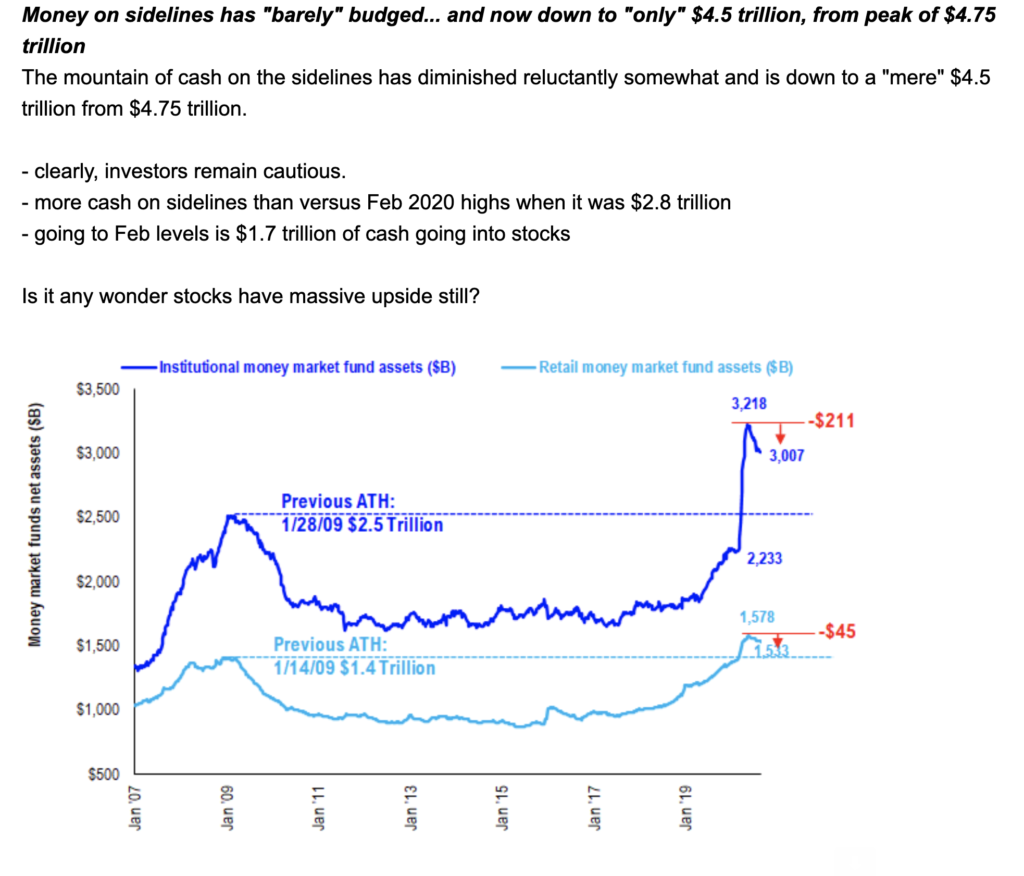 But mone only comes into the market if the economic data gets better, or less bad… 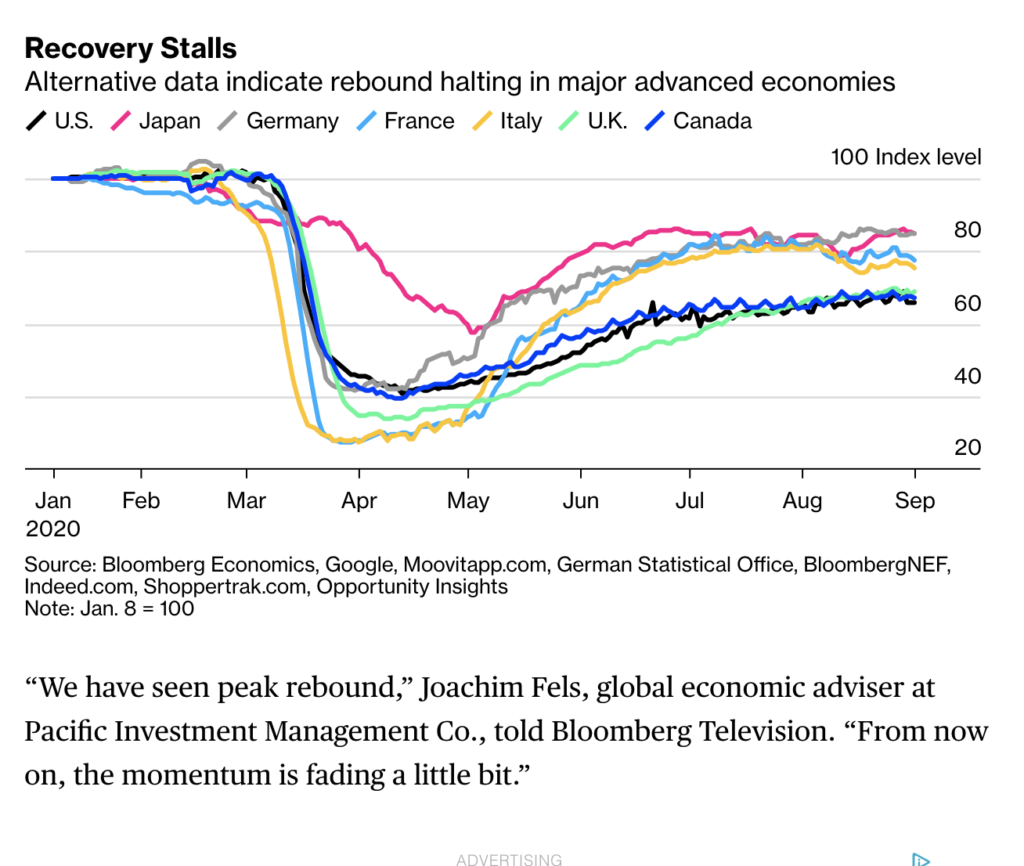 “We’ll manufacture our critical manufacturing supplies in the United States, we’ll create ‘made in America’ tax credits and bring our jobs back to the United States and we’ll impose tariffs on companies that desert America to create jobs in China and other countries,” Trump said at a White House news conference on Monday where he complained at length about his Democratic re-election opponent.

“If they can’t do it here, then let them pay a big tax to build it someplace else and send it into our country,” he said of U.S. corporations. “We’ll prohibit federal contracts from companies that outsource to China and we’ll hold China accountable for allowing the virus to spread around the world.”

Then why is the Trade Deficit with China, one that he has been so fixated on at a decade high??

The new figures also show an increasing trade deficit with China, despite Mr Trump’s vows to reduce that figure.

During the second quarter of 2020, US government figures showed the deficit with China increased $21.4bn to $75.8bn.

Mr Trump campaigned in 2016 on getting much tougher on trade with China, and earlier this year struck a limited trade deal with Beijing after a bruising trade war between the two countries.

Lululemon (LULU) will report its fiscal Q2 results today after the close. The options market is implying about a 10% move in either direction tomorrow. The stock is up 56% YTD, $325 looks like the next stop on the downside: 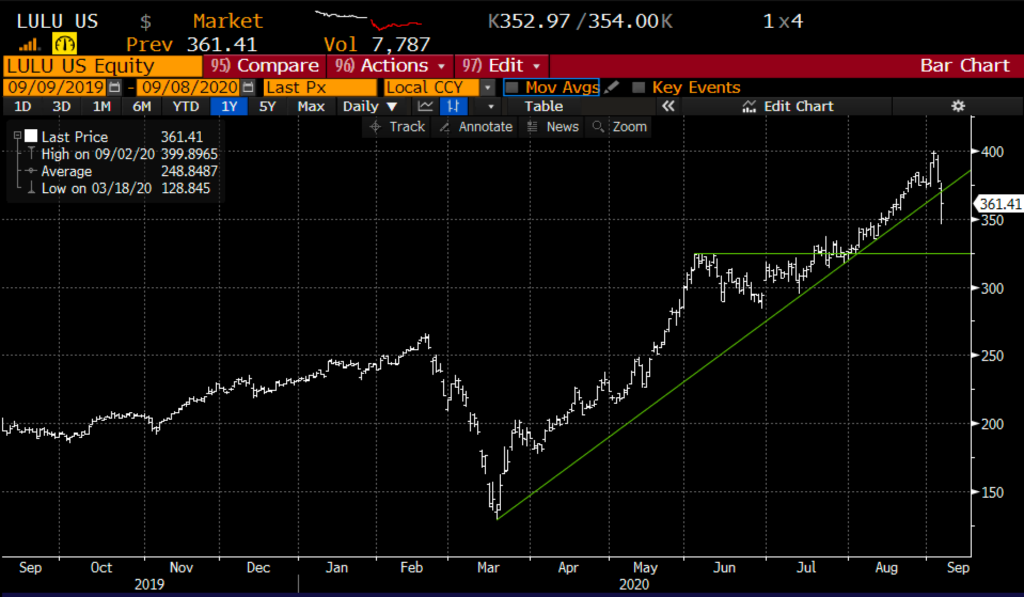