Slack (WORK) will report its fiscal Q2 results today after the close. The options market is implying a $5, or ~16% move in either direction between now and Friday’s close, most of which is for tomorrow’s post-earnings response. In the four quarters since going public last year, the stock has moved on average about 8%, with the last three all lower and the last on down 14%.

Shares of WORK are up 33% on the year, fairly dramatically underperforming many of its highflying work from home peers like Zoom (ZM) which despite its recent 24% decline since its all-time highs made last week the stock is still up 433% on the year sporting a $103 billion market cap. ZM has lost more in market cap in the last week than WORK’s market cap at $17 billion. It is worth noting that the implied earnings move is equal to the amount that WORK is down since last week, and the stock clearly has a different feel to it than it did in early June prior to its Q1 results as the stock had just rallied 33% in the few weeks prior to posting what investors deemed as disappointing results. Looking at the chart below I think it is safe to say that $27.50 is important technical support, a level the stock has not been below since early May, which also happens to be very near its 200-day moving average: 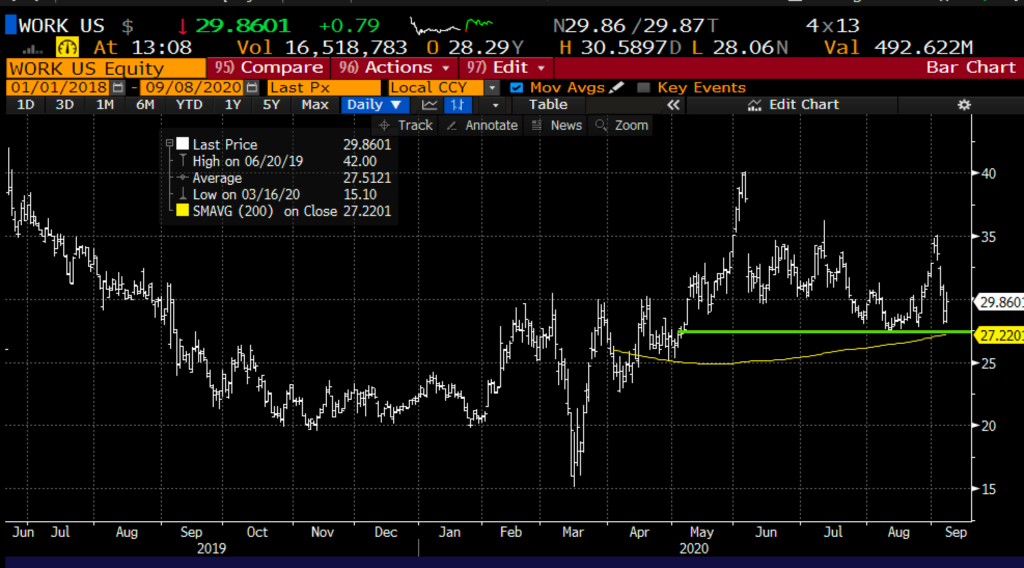 Wall Street analysts are fairly mixed on the stock with 12 Buy ratings, 9 Holds and 2 Sells with an average 12-month price target of $35.50.

Since going public last year through a direct-listing, and most importantly this year since the start of the pandemic investors have been generally unimpressed with WORK’s financial results, Following their last quarterly report in June, per Barron’s:

But Slack’s earnings report on Thursday, while good, was no reprise of Zoom’s astonishing results. Revenues were $201.7 million, up 50%, and well ahead of guidance, and Slack reported a narrower-than-projected loss of two cents a share. But the company posted a billings number for the quarter that wasn’t quite as good as the revenue line would have suggested, as deferred revenue took a $17 million hit from a combination of renewal timing issues and concessions to financially struggling customers.

Last week when ZM reported revenues that were up 355% year over year and 100% sequentially posting a solid GAAP profit. Shares of ZM surged 41% the next day, gaining more than $30 billion in market cap, but has since given most of those gains back. WORK will NOT post revenue growth and profitability anywhere near that, which in this market environment might not be viewed through rose-colored glasses.

Analysts are again focused on billings, the metric that sent the shares down sharply following their Q1 report, per Bloomberg:

Wall Street is looking to see how much strong engagement at the messaging platform translates to billings. The company has seen higher demand as the pandemic fuels more remote work, but “there is a general understanding that record engagement may not translate to record billings,” according to Morgan Stanley. Cowen wrote that Slack’s billings could show “a respectable amount of upside” in the quarter. Total billings are expected to grow 13.7% from the year-ago period, to $232.9 million, according to a Bloomberg Consensus estimate, while revenue grows 44%. Paid customer accounts are expected to rise 14.9% to 127,950.

WORK management has suggested in the past that they don’t see Microsoft’s Teams as a competitor, but given the fact it is built into Office 365, it is. Investors did like the announcement in June that Amazon would use Slack for internal communications and frankly I could see AMZN, CSCO, IBM, GOOGL, CRM or ORCL buying Slack for $25 billion.

Back in May, I detailed a bullish strategy in WORK, looking for a rally above $30 when the stock was $26,50:

With the stock at $30, the Oct 30 call is worth about $3.80, at this point I would roll this view up and out. For instance, taking the 80 cent profit and buying the

Rationale: this trade idea risks 11% of the stock price, breaks-even up 11% and has a max gain of 38% if the stock is up 50% in 5 months, which is where I think a takeout would occur somewhere around $24 billion. But the premium for this trade also defines one’s risk to the technical breakout down level near $27.

I’ll offer my usual PSA, without high conviction into an event like earnings it is generally a losing proposition to initiate long premium directional trades as most of the time with the post-earnings vol crush with short-dated options you will have a better opportunity.

IN this case, though I am adjusting a winning trade allowing for more time and not actually risking any more than the original trade idea from a few months back.