Yesterday shortly after the market opened I taped my weekly In The Money segment with Fidelity Investments, watch by clicking below: 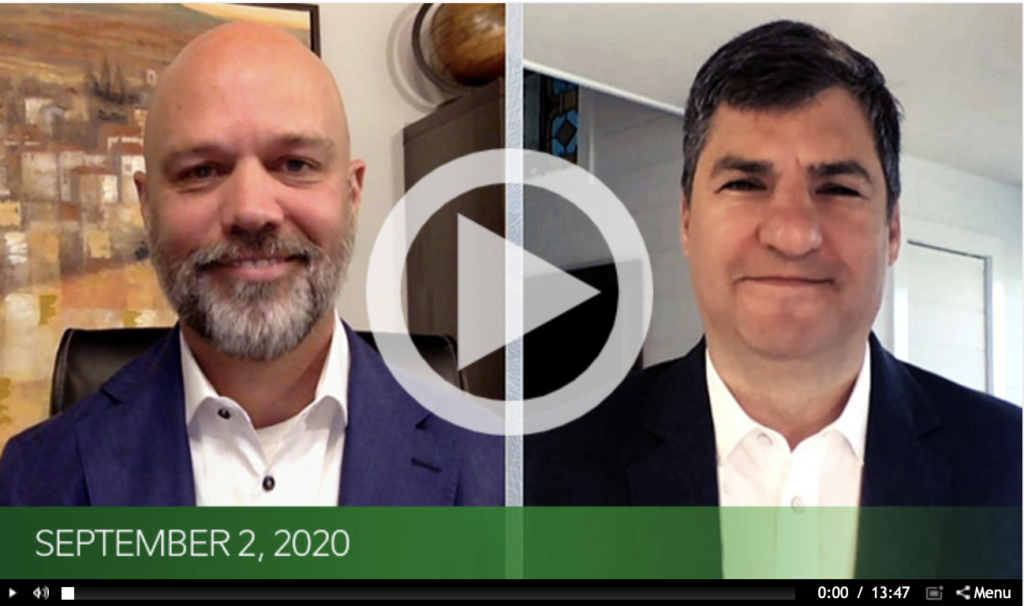 I discussed the growing divergence between the market and equal weight S&P 500, which speaks to the narrowing of breadth in the broad market, here were my notes: 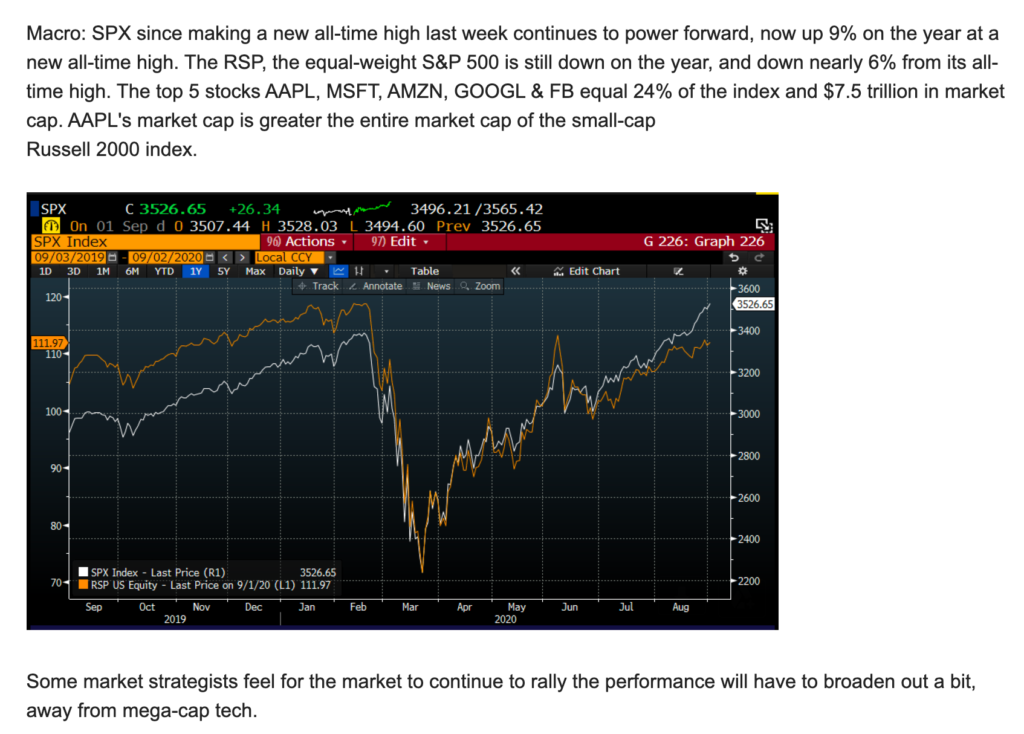 The theme of this week’s show was the daily new highs in the S&P 500 and how to play some catch up with some laggards. I detailed two trade ideas, the first in Oracle (ORCL) where I see a couple of potential near-term catalysts in the next couple of weeks, The company is in the mix for a bid for TikTok’s U.S. assets. I don’t think there is a strong likelihood they are able to outbid and out-maneuver a joint Microsoft (MSFT) and Walmart (WMT) bid, but if they were to prior to the trump admin’s Sept 15 deadline I think investors would see it as a positive despite the large price tag… seen as a way to transform the company, Also the company will report earnings prior to Sept expiration and if they were able to post a beat and raise, the stock looks poised for a massive technical breakout. But that is a big if, its Old-Tech brethren like Cisco (CSCO), Intel (INTC), and Western Digital (WDC) had all been duds since their last reports. Here are the notes for the defined risk trade idea in ORCL that I detailed in the show: 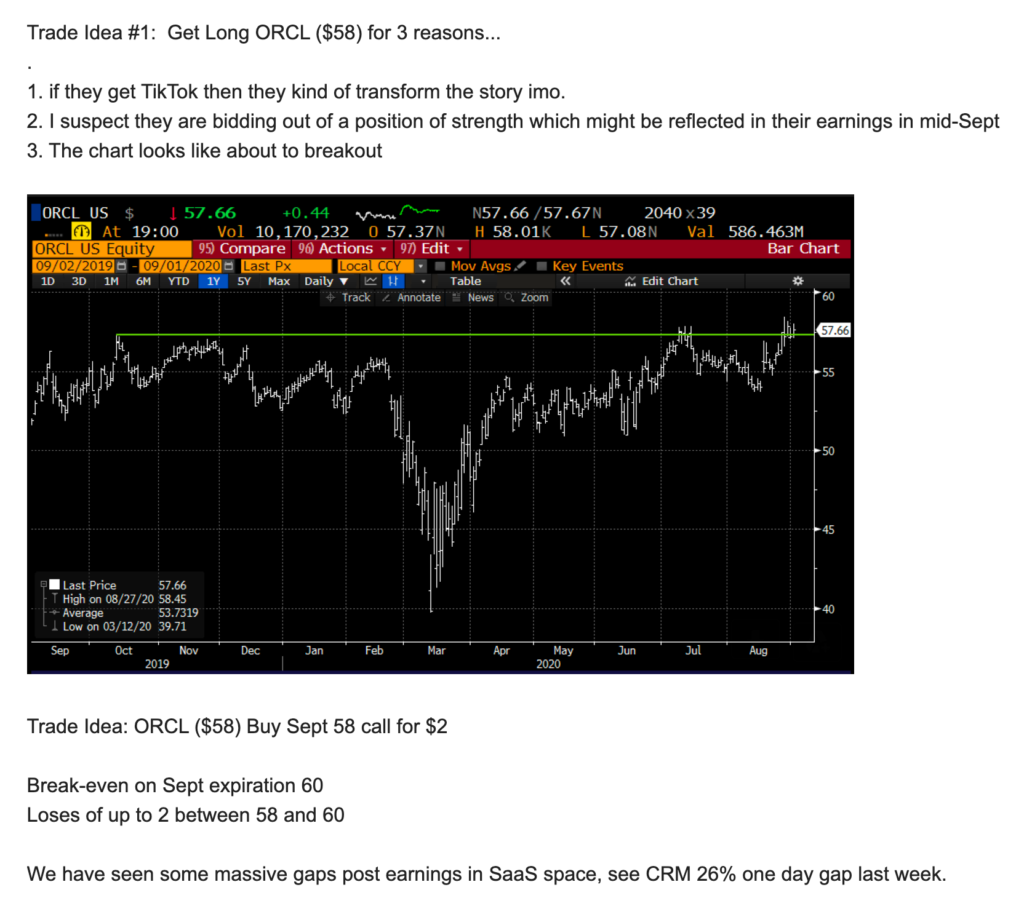 A persistent theme in 2020 is the effect of low-interest rates on stocks, I detailed a trade idea for stock investors or options traders where the dividend yield was one of the main pillars for the bullish stance, but also a potential catalyst that could help AT&T (T) exit a decking business, pay down some debt and focus on what will be the signature acquisition of the companies long history, Time Warner. Here are my notes: 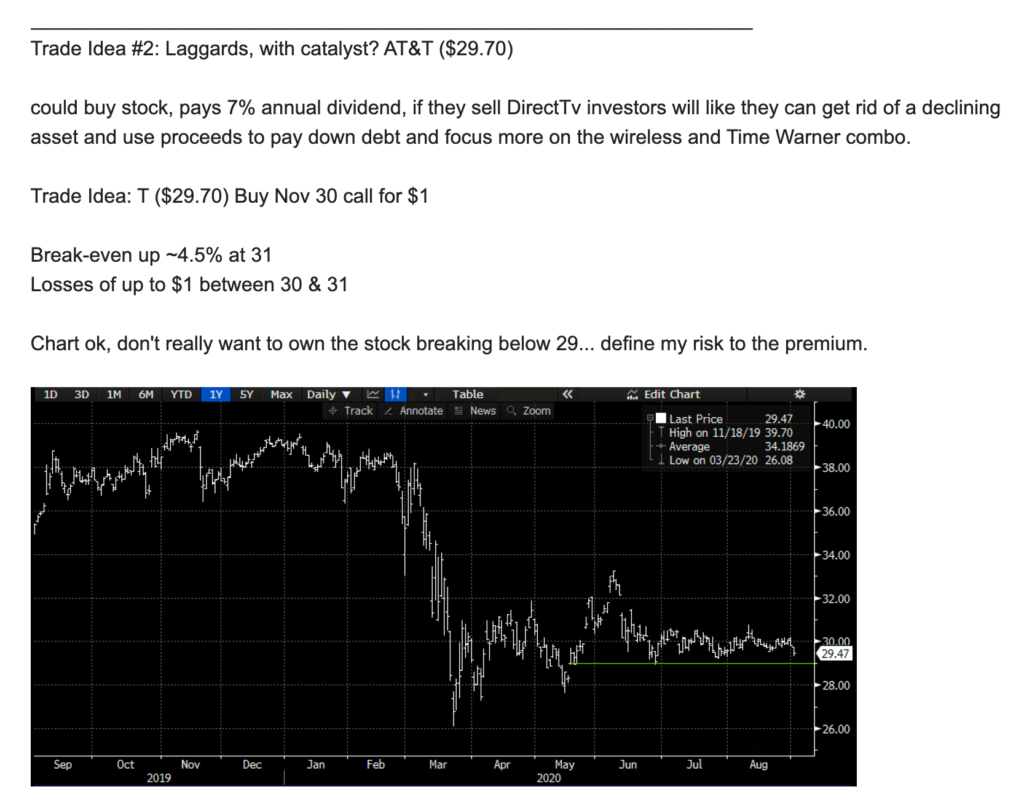 Lastly, on Aug 5th I detailed a bullish trade in Coca-Cola (KO) and a bearish trade in Expedia (EXPE), one has worked very well, the other has not, here is my update on both:

Back on August 5th, I detailed the following bullish trade idea in Coca-Cola (KO):

Also back on Aug 5th, I detailed a bearish trade idea in shares of Expedia (EXPE):

As well as the KO trade idea has gone, this one has gone very badly. With EXPE trading up 25% since. This was obviously dead wrong but highlights why we look to define our risk in trades in volatile names like EXPE. This trade risked 5.5% of the stock price and has lost most of its value.