Shares of Zoom (ZM) are up 39% as I write, the company that guided the current fiscal year revenues to $2.4 billion is now sporting a $127 Billion market cap, or about 53x its expected sales and about 41x expected next year sales which should decelerate to about 35% year over year growth. This is truly astounding for a stock that went public in April of 2019 at $36, started the year just below $70, and is now trading above $450 up 568% on the year: 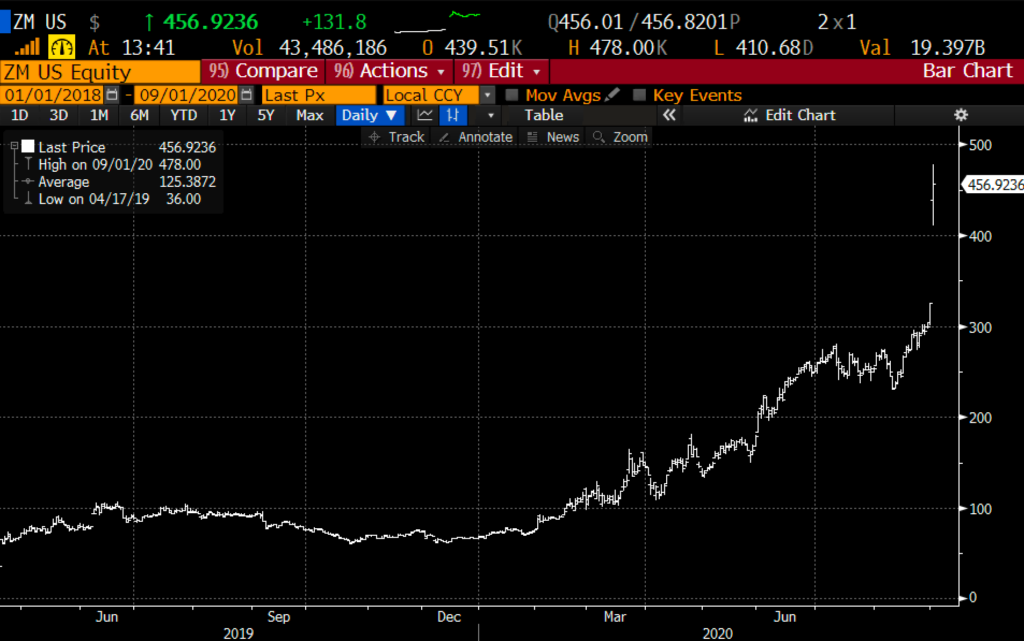 For those of you wondering how did this one trick wonder, with competition from every major tech Behemoth (CSCO, GOOGL, MSFT & FB) Win the Pandemic, start with ZM’s origin story, from Forbes, March 8, 2019 (Can Cisco Respond To Zoom’s Challenge In $20B Videoconferencing Market?):

As Zoom CEO Eric Yuan explained in a September 2017 interview, he left Beijing in 1997 to be the founding engineer of WebEx. Cisco Systems bought the video conferencing company in 2007 for $3.2 billion and Yuan stuck around Cisco as a VP in its Collaborative Systems group.

Yuan was not happy with the way Cisco was managing WebEx when he left in 2011. As he said, “I was paid very well as a VP at Cisco. But WebEx was my baby. In 2010 and 2011, I did not see happy customers. I was very embarrassed that I spent so much time on the technology. Why are the customers not happy?”

He could not convince Cisco management to fix the problems. As Yuan explained, “Cisco would not change its collaboration strategy. I said I had a different view and left Cisco. 35 to 40 WebEx engineers left with me. Six years later we are doing well with 750,000 customers [up 67% from 450,000 in January 2017]. We are growing thanks to our simplicity, quality, features and price and we have a very high net promoter score of 69.”

IDC reported that Cisco was the dominant player with Polycom and Huawei taking second and third place. In the third quarter of 2016, Cisco’s revenues grew 6.4% and it controlled 46% of the worldwide video conferencing equipment.

More recently, Gartner placed Cisco and Zoom in the Leader quadrant of the 2018 Meeting Solutions Magic Quadrant. And by October 2018, Zoom had experienced “triple-digit YoY user and revenue growth and 110% growth in employee headcount,” according to Digital Transformation.

And its that customer experience that some prominent tech investors have suggested why and upstart is able to overtake its predecessor: 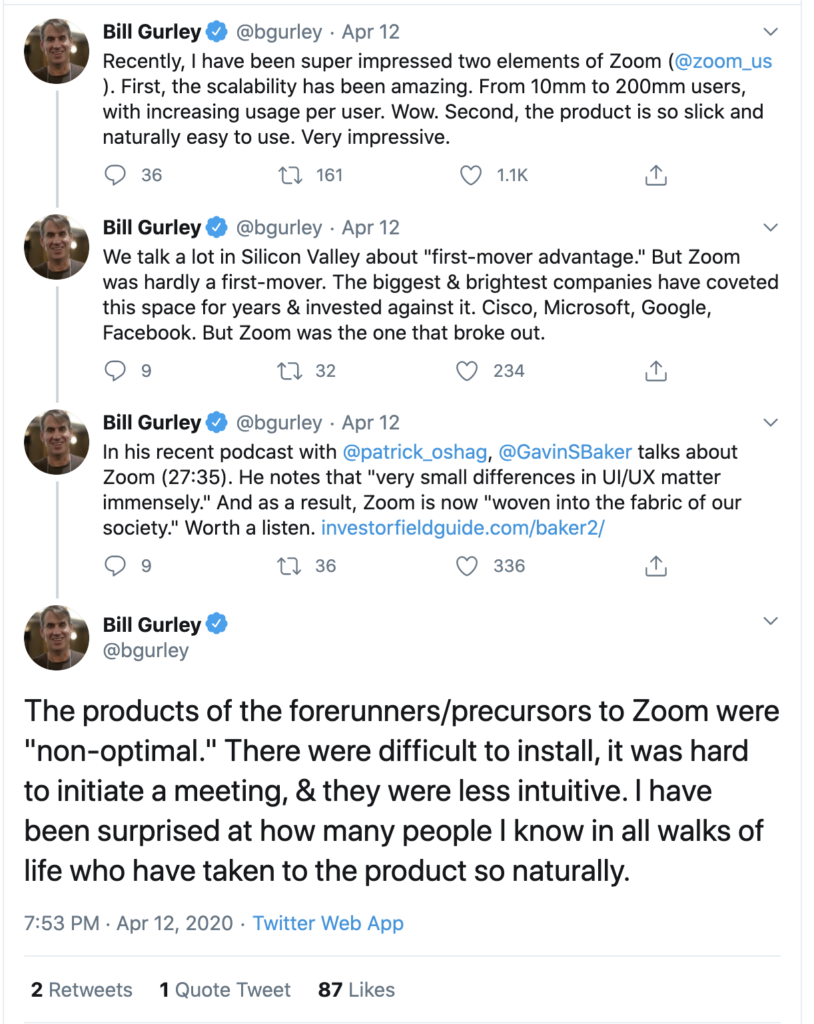 A year after the Forbes article was written, both ZM and CSCO were overwhelmed with demand for their video conferencing as the pandemic caused nearly all workers and students to work remotely. Per Bloomberg on March 23, 2020 (Cisco Sees Demand Surge for Webex, Zoom’s Larger Rival) it would have appeared that CSCO’s Webex solution was experiencing success similar to their upstart rival:

Webex opened a free sign-up and service in response to the virus outbreak that drew 240,000 new subscriptions in the first 24-hour period, the company said. That program mirrors the growth by Zoom, which offers a time-limited free service for its multiparty conference calls and a paid service. Srinivasan said Cisco’s data policies are stricter than Zoom’s, meaning important work that needs to remain private will continue to take place on its system.

When CSCO reported their fiscal Q4 results on August 12th the company guided revenues down 10% for the current quarter, and the stock sold off 11% that day and has traded lower as the Nasdaq and S&P 500 have seemingly made new highs daily since: 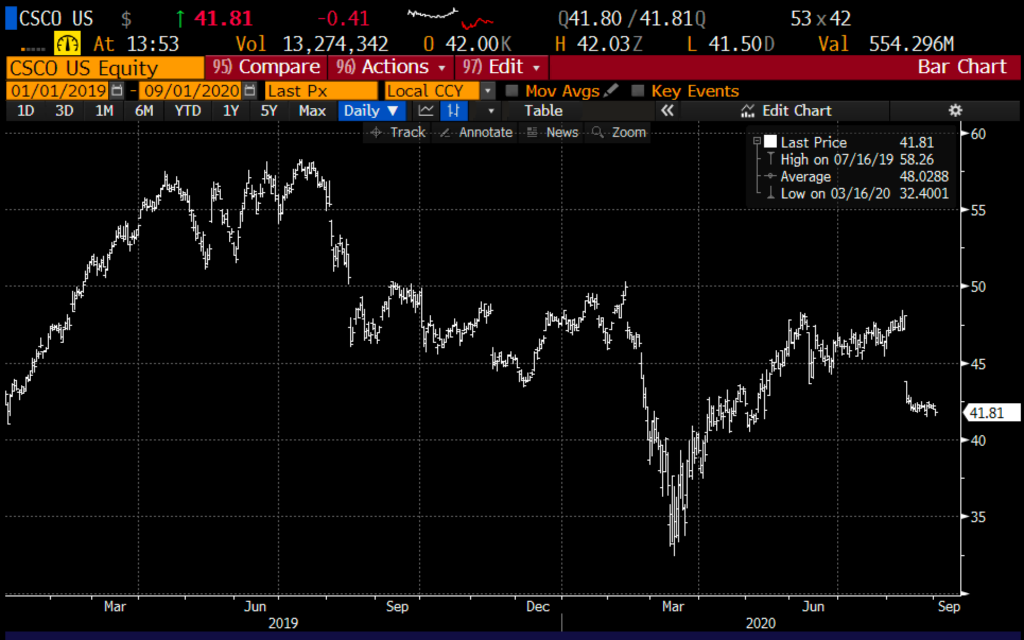 On CSCO’s earnings call the company highlighted the strong demand for services in their Collaboration Division:

Webex had strong performance this quarter with double-digit growth as businesses, governments, educators, and frontline workers everywhere have embraced remote work. We expect this momentum to continue as we have begun to see the conversion of free trials into paid subscriptions.

While there are other SaaS businesses in this division for CSCO, per Bloomberg, the last time they broke this number out their Collaboration Division revenue had $4 billion in revenue. The problem here is that double-digit growth for CSCO in a more mature business that is inferior to that of Zoom’s is not really moving the needle for a company that is expected to have nearly $50 billion in sales in the current fiscal year. But with ZM now trading at nearly 75% of the market cap of CSCO, something has to give. If the company is not now considering spinning out Webex and other fast(er) growing software businesses to unlock shareholder value, they should be.

I tweeted about this earlier and a guy responded asking if I was suggesting a pairs trade… NO, I mean, Yes I would love to if I was at a hedge fund, kept tight risk controls, and was market neutral, but how would that have worked out this year in Intel / Nvidia, or GM / Tesla?? So you get the point… To quote the early 20th-century economist John Maynard Keynes  “The market can stay irrational longer than you can stay solvent.”

I highlight the disparity because we are in a market that makes little sense to me, but it is worth your while in periods like this to start thinking what more rational behavior looks like. For traders, you don’t need to nail the top for an excellent short opportunity, you just need to press it at the right time, when the fever has broken, we will keep our eye on ZM on the short side and CSCO on the long side.