Walmart (WMT) and The Home Depot (HD) both reported their fiscal Q2 earnings this morning that were well above estimates causing both stocks to initially surge in the pre-market. As more color on their outlooks has emerged during their conference calls the stocks have given back all of their early gains and are down on the session. Both stocks surged into their reports, yesterday closing at all-time highs, to suggest that expectations were high was an understatement.

To put some context around the strength of these reports I think it is important to remember that both of the stores were two of very few national chains that were allowed to be open during the lockdown, and certain aspects about the lockdown played very well into both of their strengths. My friend Peter Boockvar of Bleakley Advisors in his morning note put some context around how in the middle of a pandemic with tens of millions out of work these two retailers are able to see such unexpected demand:

Outside of Home Depot’s incredible earnings report, I think the other most important commentary to listen to in the conference call at 9am est is what they say about business in August without the additional government transfer payments and whether the momentum continued as more of the economy reopened. Randy Forsyth in the weekend Barron’s quoted numbers from Stephanie Pomboy of Macromavens in quantifying those government checks. “A $680 billion decline in wages and salaries and a $174 billion drop in other income was more than offset by $2.24 Trillion in transfer payments…for a net income gain of $1.386 Trillion.” This helps to explain why consumer spending is higher in the middle of a pandemic than when it was when the unemployment rate was at 3.5% and why without it will have a profound economic impact if not refilled to some extent. Which I’m sure it will.

And these two comments from Walmart’s CFO stuck out to me from their conference call:

With no plans for more fiscal stimulus, while the Senate is on holiday, and back to school apparently in shambles, this might be as good as it gets for the time being for retail. The S&P Retail etf, the XRT is right back at its prior all-time high from nearly two years ago, and up 100% from its March lows, up 14% on the year massively outperforming the S&P 500 (SPX) which is up 4.7%. 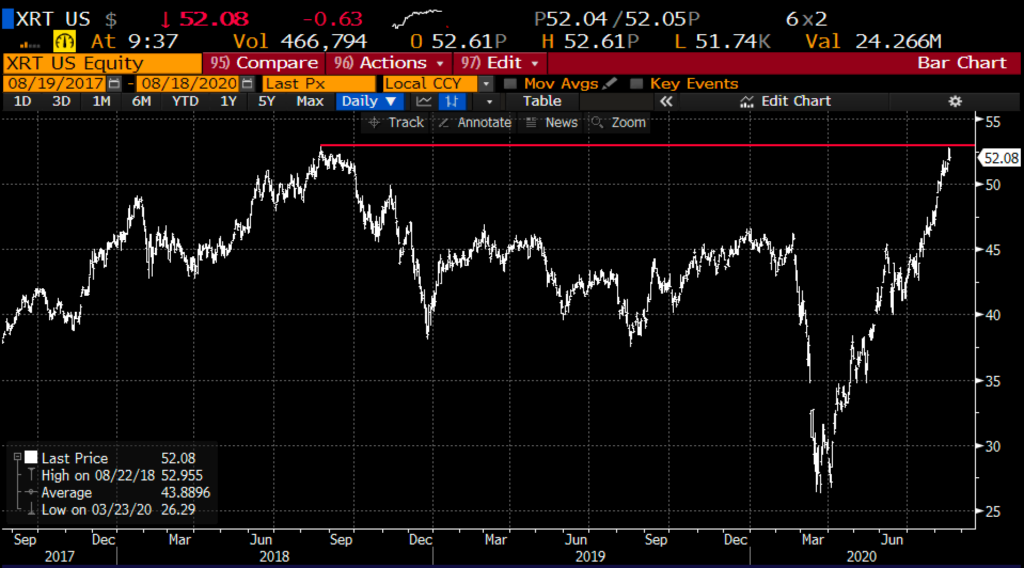 The matched high is uncanny.

So what’s the trade? Retail stocks are just a tad hot when you consider what will at the very least be one month lag in expanded unemployment benefits, at a time where many Republicans in Congress, who are not running for reelection are opposing more stimulus, we might see a speed bump in the pace of consumer spending in the months to come.