This morning in Axios’s AM newsletter they had the following report that I thought was quite jarring:

By some measures, we’re doing quite well:

But by more realistic and meaningful measures, people are in terrible shape:

There’s “no indication that consumers expect the recession to end anytime soon,” according to Richard Curtin, director of the University of Michigan Surveys of Consumers.

Regular readers and viewers of CNBC’s Fast Money know where I stand on this, in early June I suggested that I was far less bearish on equity markets than I was in April after the first ramp off of the March lows because of the unique nature of the front end-loaded monetary and fiscal stimulus in the evolving health and economic crisis, but increasingly bearish on the economy, and the notion that we will have a well-orchestrated V reversal as we have had in the stock market.

I will also point you to an interview of JPM CEO Jamie Dimon with NBC’s Stephanie Ruhle, highlighting the disconnect between the stock market and the actual economy emphasis mine:

“We’re in a recession, but you’re going to have a delayed effect of seeing the normal effects of recession,” he said, referring to the government’s fiscal stimulus packages and the series of emergency actions put in place by the Federal Reserve. “But it will eventually affect incomes.”

The longer the country stays closed for business, the greater the economic impact on the country, Dimon said, adding that he believes the country can ask people to return to work safely.

“We can’t be doing this a year from now and think that it won’t cause devastation in the economy,” he said. “The health effects, negative health effects of that in terms of depression and drugs can be really bad.”

Sentiment lead by the stock market and optimism about therapies and vaccines might have led us to a point where we are being overly optimistic about the scar tissue that will most certainly be attached to our economy for some time once we are on the other side of the pandemic which will likely be reflected in structurally high unemployment, especially relative to the Jan lows at 3.5% which were a 60-year low. Bob Pisani on CNBC.com highlighted today how furloughs during the pandemic may turn into permanent job losses, citing the following examples:

The most glaring example of cost cutting is the temporary job “furloughs” in many cases morphing into permanent layoffs.

The CEO of C.H. Robinson, a transportation company, said about half of their furloughs are now permanent headcount reductions.

William Christopher Wellborn, the COO of Mohawk Industries, said “We have made permanent staffing reductions to reduce our fixed cost and align with current demand.”

The CFO of Textron, another industrial, and the CEO of Stanley Black & Decker, both said temporary salaried layoffs have converted into permanent reductions.

Spirit AeroSystems’ CEO said they were making the layoffs of thousands permanent after the Boeing/Airbus cuts.

The stock market over the last week is in the midst of a fairly dramatic rotation, out of mega-cap tech (F’MAGA – FB, MSFT, AAPL, GOOGL & AMZN) and growth into Banks, Industrials, Energy, and Small Caps. The moves in these groups in just a few days has been dramatic, and despite F’MAGA making up nearly 22.5% of the S&P 500 (SPX), the index is now within a percent of its all-time high in February: 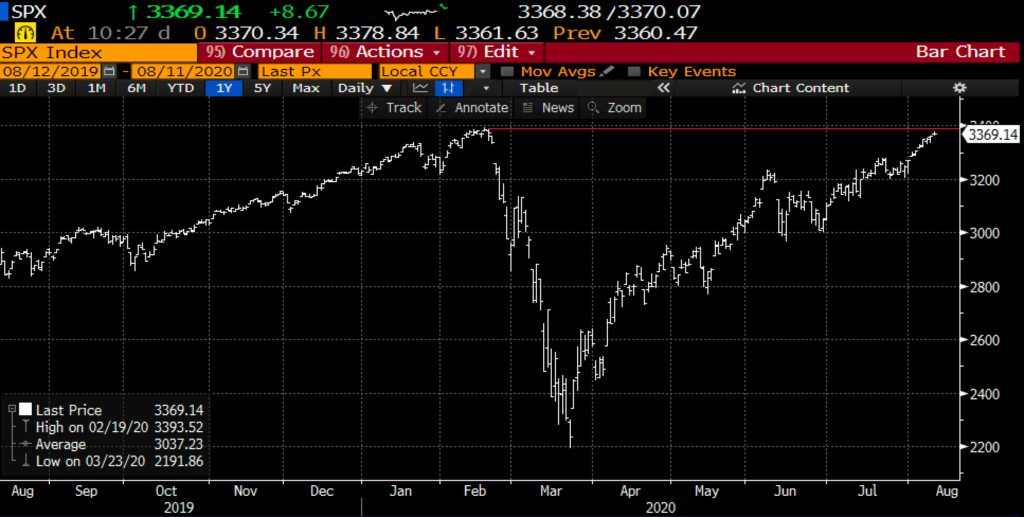 This rotation does not give me a whole heck of a lot of confidence that the SPX will have the energy to muster a meaningful breakout given some of the data points highlighted above about the economy, specifically the consumer at a time where further relief efforts have stalled in Washington.

Which leads me to some high ticket purchase items like Cars that might have seen some pent up demand, and might be benefitting from a short supply as many manufacturers shuttered their factories for periods in the Spring.

Shares of GM have had a nice bounce of 100% off of their March lows, but the stock’s recent move over the last two week’s from its uptrend (after narrower Q2 loss and better than expected July sales) to its downtrend and its 200-day moving average could set up for a decent trade to fade the stock back to the mid-20s: 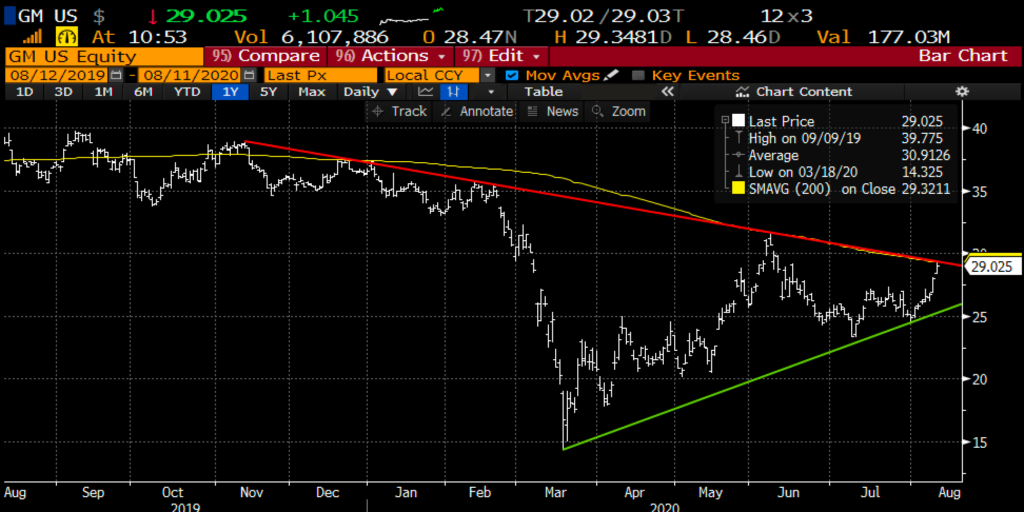 For those looking to express directional views with defined risk, short-dated options prices are cheap relative to realized volatility:

So what’s the trade? If you are inclined to play for disappointing Aug auto sales which will be reported on Sept 1, consider put spreads in GM in Sept expiration targeting the uptrend near $25, for instance: