Disney (DIS) reports its fiscal Q3 earnings today after the close. The options market is implying about a 5% one day move tomorrow which is double the average over the last four quarters. With the stock just above $118, the Aug 7th weekly 118 straddle (the call premium + the put premium) is offered at $6, if you bought that and thus the implied movement you would need a rally above $124 or a decline below $112 to make money.

Shares of DIS are down 18% on the year, and down 22% from its all-time high made in late November. At its lows, in March the stock was down nearly 50% but has rallied 50% from those levels. From a technical perspective, the stock is very near the height of tension of its recent range of a series of lower lowers and a series of higher highs, it appears poised to break of this wedge it is in one way or the other, and soon: 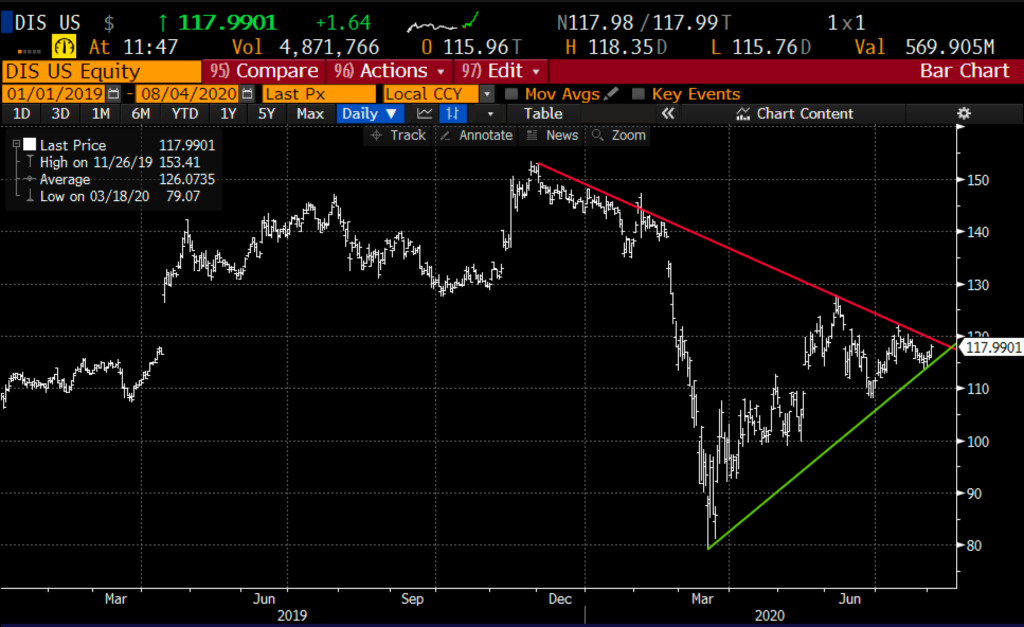 Earnings are expected to be awful, with virtually every part of Disney severely impacted by the COVID-19 pandemic except for Disney+/Hulu, which have been notable beneficiaries. What will be far more important to investors is how management discusses their plans to deal with the unprecedented challenges facing Disney over the coming year(s).

We have been surprised that investors are willing to look through the ongoing pandemic and give Disney credit for returning to 2019 EPS levels, if not higher. The mistake investors are making is that by the time Disney recovers from the pandemic, their earnings power will have materially eroded, leading to a lower base level of revenues than 2019 (tied to broadcast/cable networks and studio entertainment); not to mention the time needed to “recover” in theme parks could be years. Disney+ has been a rocket ship subscriber-wise, surpassing even our far above consensus subscriber expectations (bear in mind, with average ARPU moving toward $5/month, Disney+ quarterly revenue is still sub $1 billion). However, Disney+ alone is not enough reason to own Disney stock at these levels, particularly as leverage moves toward 5x and management refuses to pivot their film and television businesses toward streaming.

Last week on CNBC”s Fast Money, I echoed this sentiment, with so little visibility in their core businesses, and little hope of the coronavirus abating before widespread distribution of a vaccine, and our economy in the throes of the worst recession in a hundred years, it is hard to see how this company can guide in a way that would make investors enthusiastic to buy the shares:

This is the most important chart for the market right now, says @RiskReversal. Here’s his reasoning. $DIS pic.twitter.com/6oF6poEeFF

I am obviously not optimistic about the company’s near-term prospects and I don’t think any fast-tracked coronavirus vaccine for this year’s use will be widely adopted, DIS’s outlook will be as clear as mud.

If I were inclined to be contrarian I might consider a call spread in Sept, allowing for more time for a move higher to play out and target the March breakdown level near $140: