Starbucks (SBUX) will report its fiscal Q3 results today after the close, the options market is implying about a $3.20 move in either direction or about 4.2%, which is slightly rich to the 3.5% average one-day post-earnings move over the last four quarters and slightly greater than its 10-year average of about 3.7%.

Shares of SBUX are down 13% on the year, aggressively lagging the performance of the S&P 500 (SPX) which is flat and the XLY, the consumer discretionary etf of which it is the 6th largest holding that is up nearly 10% on the year and very near an all-time high.

It is worth noting that prior to the pandemic induced lockdown of our economies, and those globally that shares of SBUX were already in a downtrend, having made its all-time high in July of 2019 and has since made a series of lower highs and lower lows, now sitting 24% below last year’s highs. At its panic lows in March, the stock found support just above its 2018 lows near $50 which marked nearly a 50% peak to trough decline: 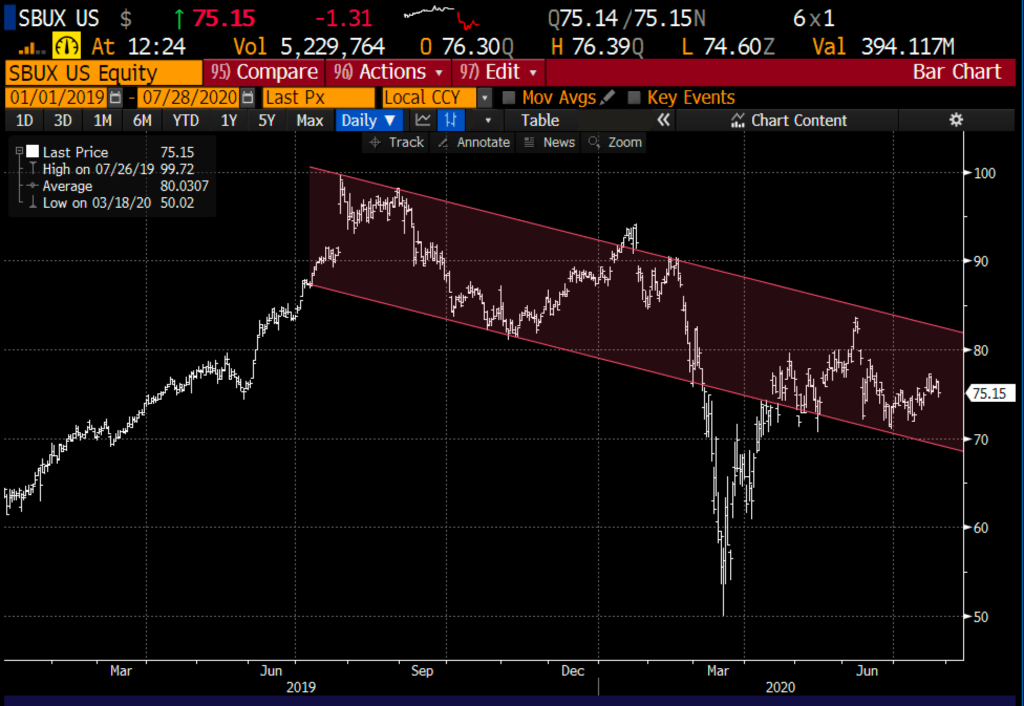 Wall Street analysts remain fairly downbeat on the stock with 15 Buy ratings, 20 Holds, and 1 Sell with an average 12-month price target of about $80, only about 5% from where the stock is currently trading.

One reason for the stock’s underperformance may be the company’s downbeat outlook given mid-quarter on June 10th, per Barron’s:

Starbucks said that it expects to lose between 55 cents and 70 cents on an adjusted basis in the third quarter, while analysts were looking for a 15 cent per-share loss. The company said that it expects the sales impact of coronavirus to ease as the year goes on, and forecast earnings per share between 15 cents and 40 cents in the fourth quarter, compared with the 37-cent consensus estimate.

For the full fiscal year, it sees EPS of 55 cents to 95 cents, again below the average analyst estimate of $1.38.

Elsewhere, Starbucks provided an update on stores that have reopened in the U.S. Comparable sales at these locations declined 43% in May, an improvement from the 63% year-over-year fall seen in April. In the last week of May, same-store sales continued to improve, ending down 32%. Today, 95% of its stores are open—although many with reduced hours—with the majority of the closed locations in the New York area.

Starbucks saw similar recovery trends in China: Same-store sales fell 21% in May, compared with a 32% decline in April, with comps down just 14% in the last week of May “demonstrating continued upward momentum.”

Over the last six weeks since management gave that outlook I think it would be safe to say with the virus raging throughout the south and west since, and the general emptiness and inactivity of previously hard-hit Northeastern cities in the Spring, and the diminishing prospect a robust back to school in the fall that the company will reiterate a downbeat outlook. From a purely anecdotal perspective, the SBUX customer experience is just not that rewarding, different rules in nearly everyone that I have gone to in the last month or so, and frankly the workers have a hard job, but I have resorted to again making my coffee at home until we are back to some normalcy or at the every least patronizing small local shops.

So what’s the trade? A beat and raise and the stock is on its way back to the downtrend in the lows $80s, a miss and guide down and its breaking support in the low $70s, and then there is an air pocket to the lows $60s.

If I thought a weak guide is in the stock as it is not going to be materially much worse than the company’s commentary in early June then I might consider a near the money call spread in Aug expiration for instance:

If I thought the company would disappoint on both earnings and reduce its forward outlook again i might play for the mid $60s in the coming weeks with a put spread in Aug expiration, for instance:

I’ll offer my usual disclaimer when trading long premium directional strategies into events like earnings, you need to get a lot of things right at the same time to merely break-even, first and foremost direction, then magnitude of the move and timing.