I hope you had a great weekend. Guy Adami and I are back with The Set-Up…what we will be watching this week and likely discussing each night on CNBC’s Fast Money:

Here are some of the charts we reference in the video.

First things first, the S&P 500 (SPX) closed Friday on its uptrend from its March lows… 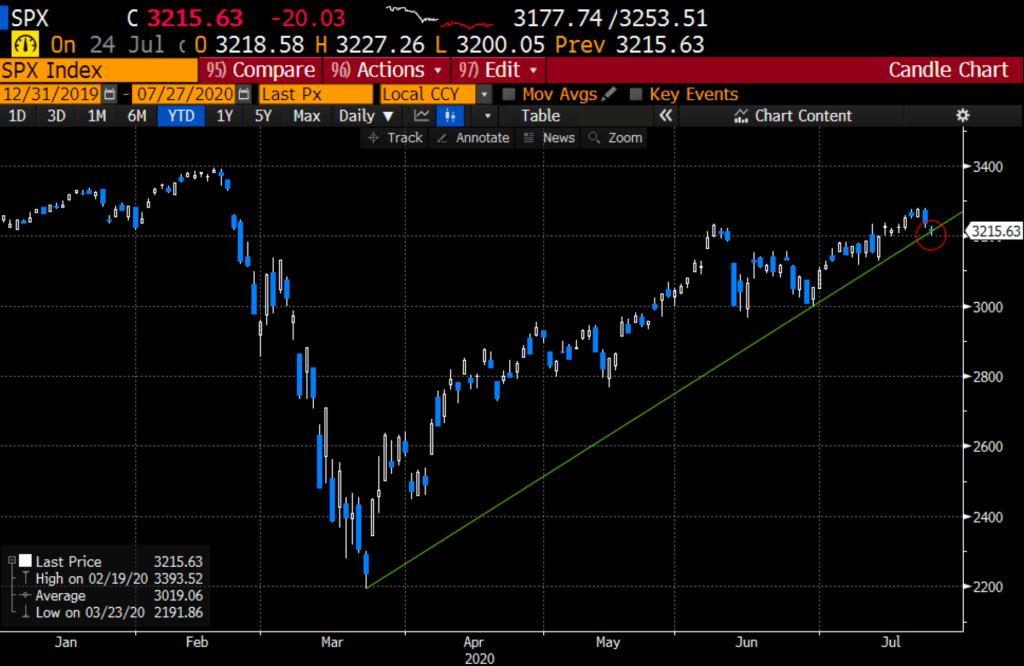 The VIX looks ready to either party… or implode: 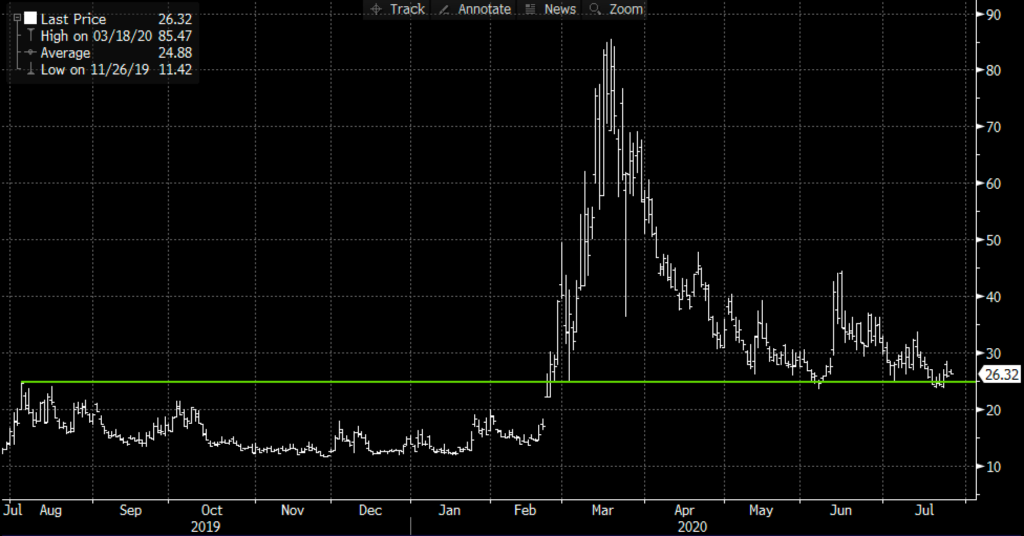 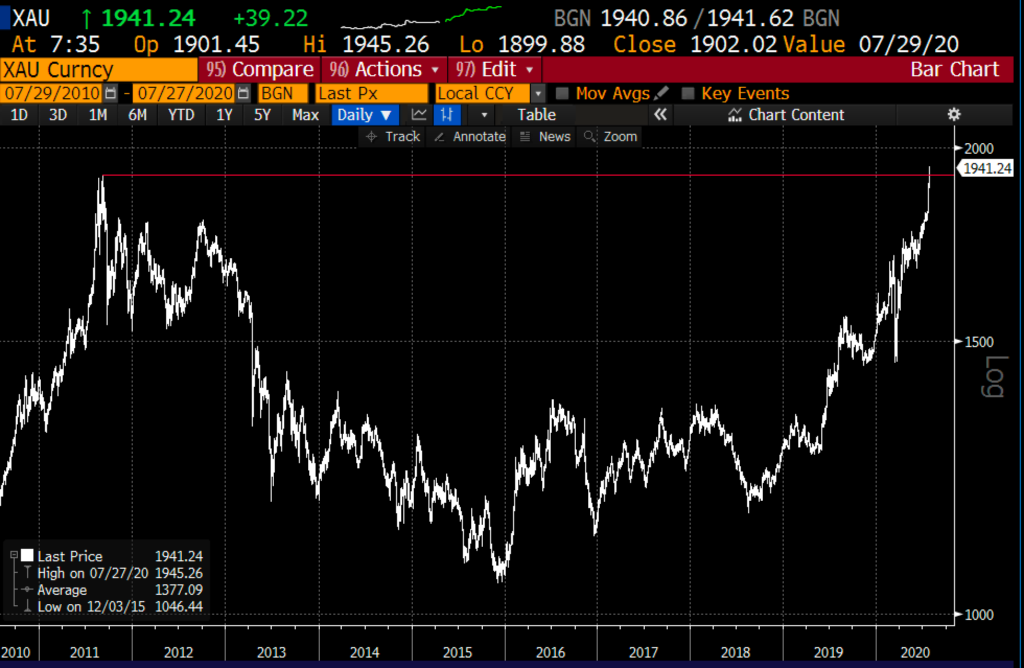 And Bitcoin is breaking out… 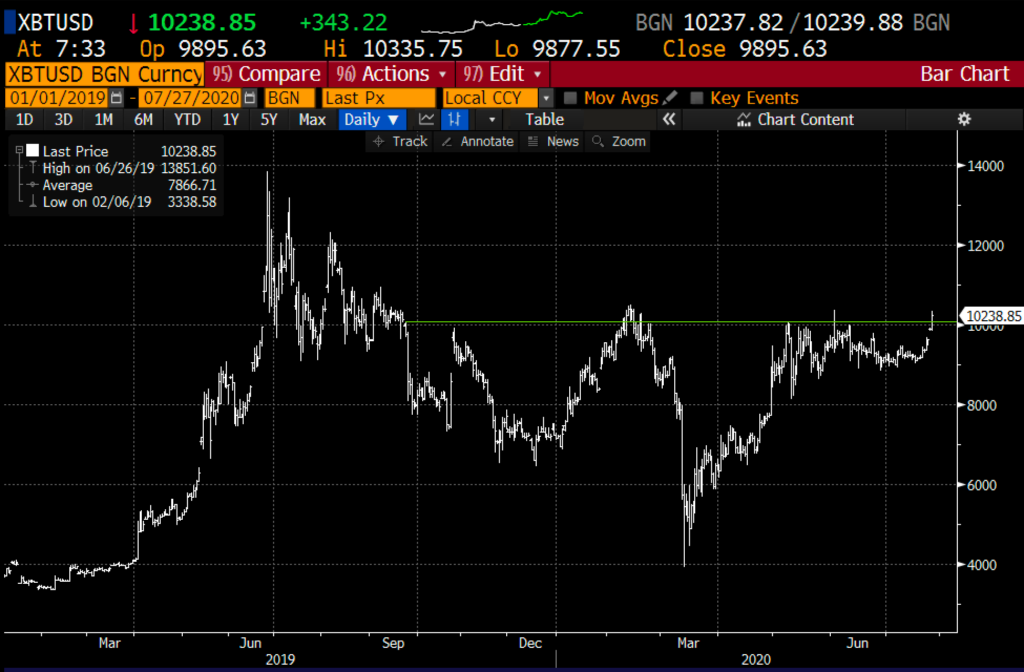 And the 10-year yield is going to zero: 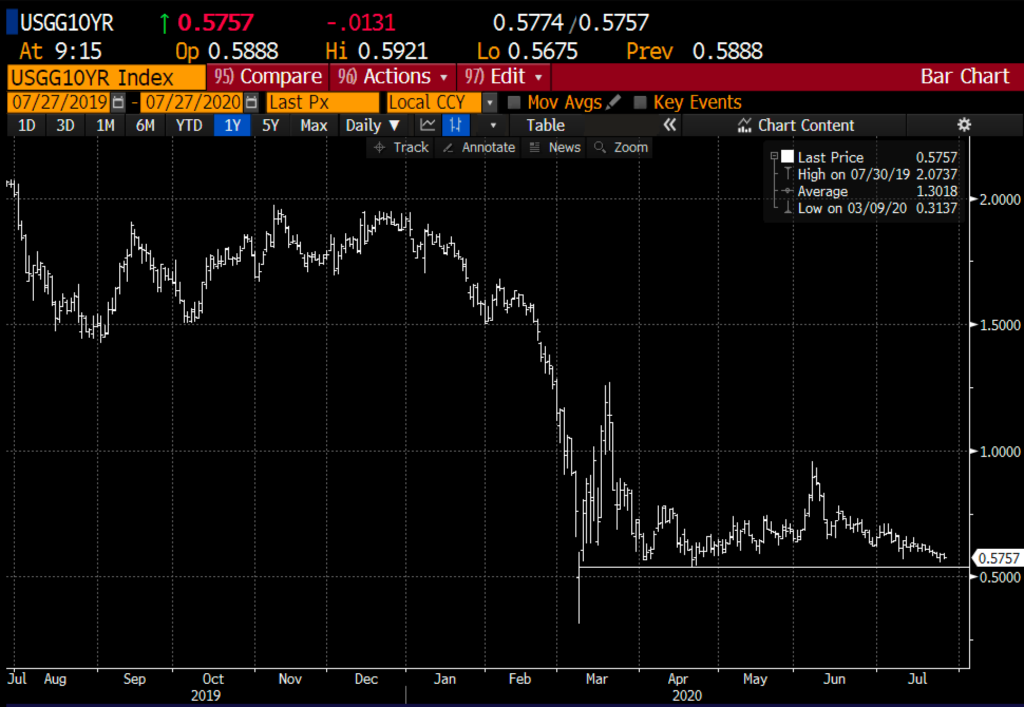 And the U.S. Dollar Index is crashing… 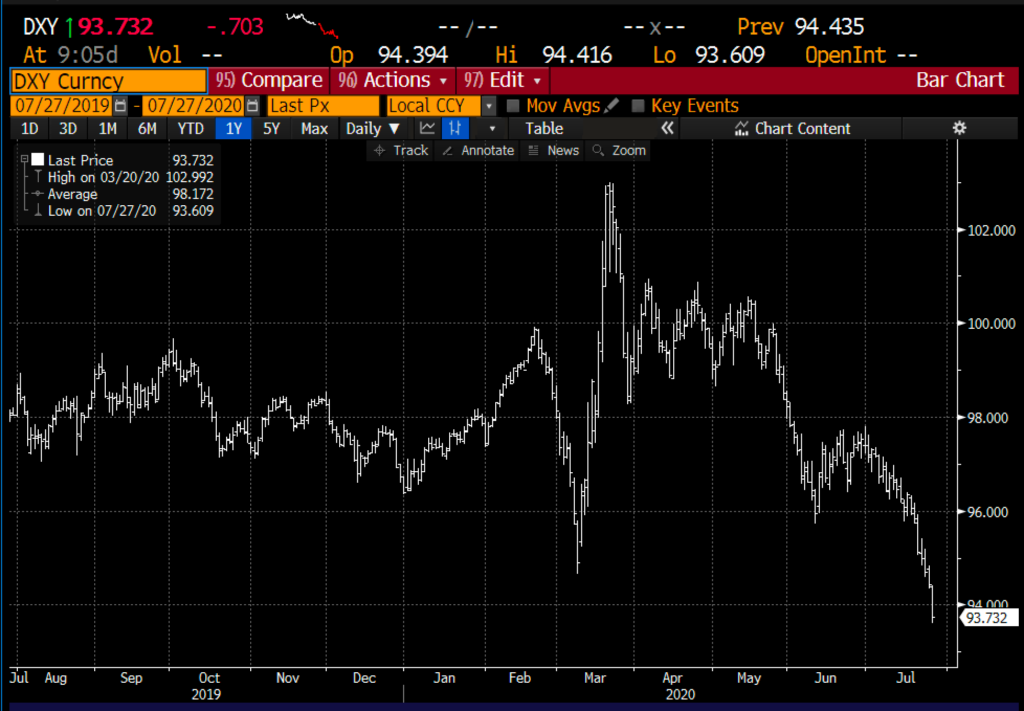 But here is the big one to me, the Nasdaq 100 (NDX) closed below the uptrend from its March lows… 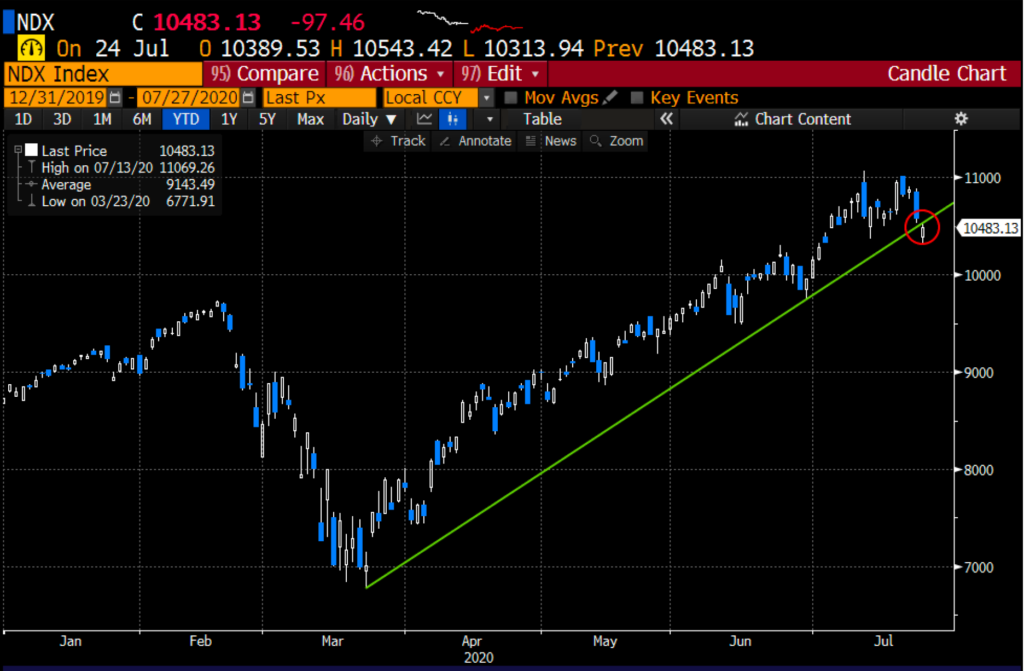 This is important because Thursday is A-Day, the AGA of MAGA all report after the close, Apple, Alphabet-Google, and Amazon, nearly $4.5 trillion in market cap and close to 40% of the Nasdaq 100.

Here are the implied weekly moves for each, first the atm straddle price, % move, and expected market cap move:

Prior to Thursday, there are some very important earnings reports, and a Fed meeting on Wednesday that is worth keeping an eye on…

AMD has been a rocket ship of late, last Wednesday breaking out to a new all-time high and closing up 16.5% on Friday in reaction to Intel’s (INTC) miss-execution on competition products. This is a beautiful breakout and $59 would be a great spot for those looking for an entry on a pullback. Implied move is ~10% vs 5% 4qtr avg one day move. 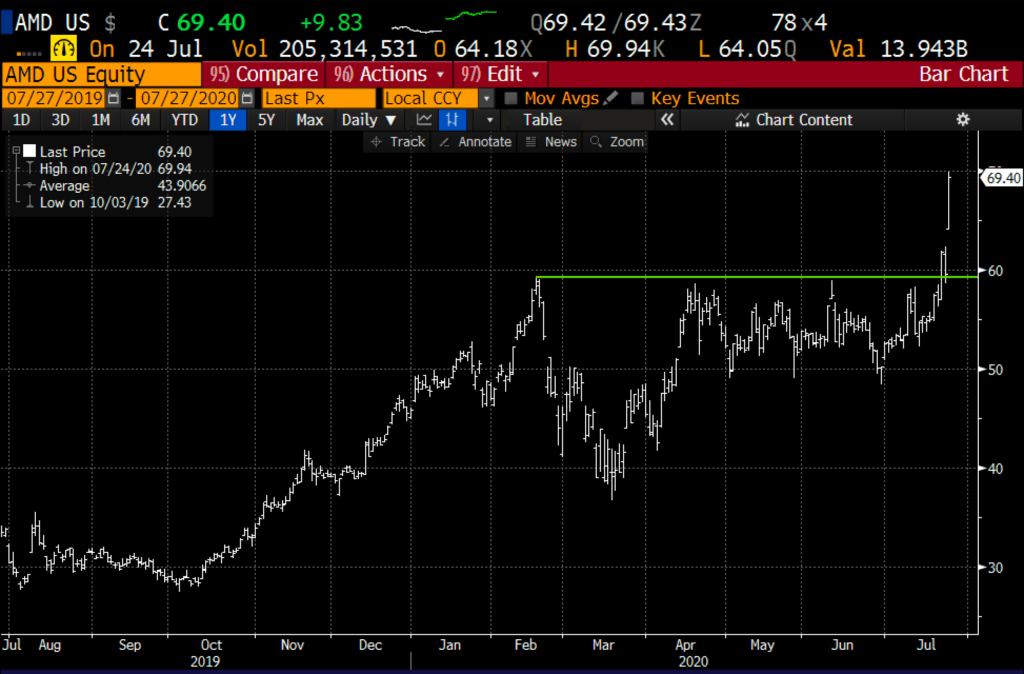 Visa (V) the implied move about 2.75% vs its 4 qtr avg of about 2%. The stock has been range-bound for two months forward guidance may give us a sense of transaction volumes in what is proving to be a spotty reopening: 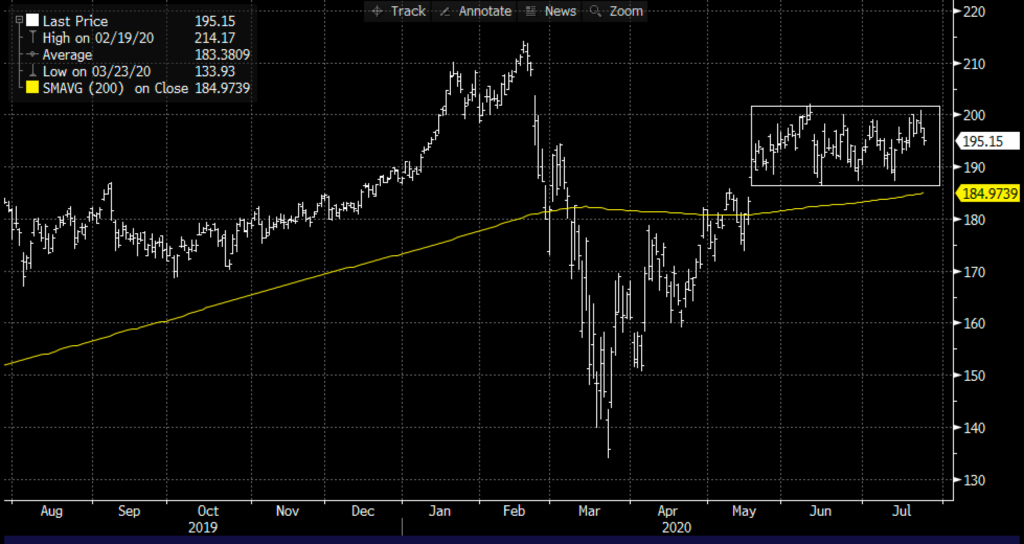 McDonald’s (MCD) before market open, the options market is implying about a 2.8% one day move which is a tad rich to its 2% avg over the last four quarters. The stock is flat on the year, after its 60% rally from its March lows, and its 10% rally in just the last month, but still down 9% from its 2020 highs. Their guidance and any commentary on the costs associated with operating under social distancing conditions will be useful for those trying to extrapolate the path forward for retail and restaurants. Also commentary about U.S. vs the rest of the world. 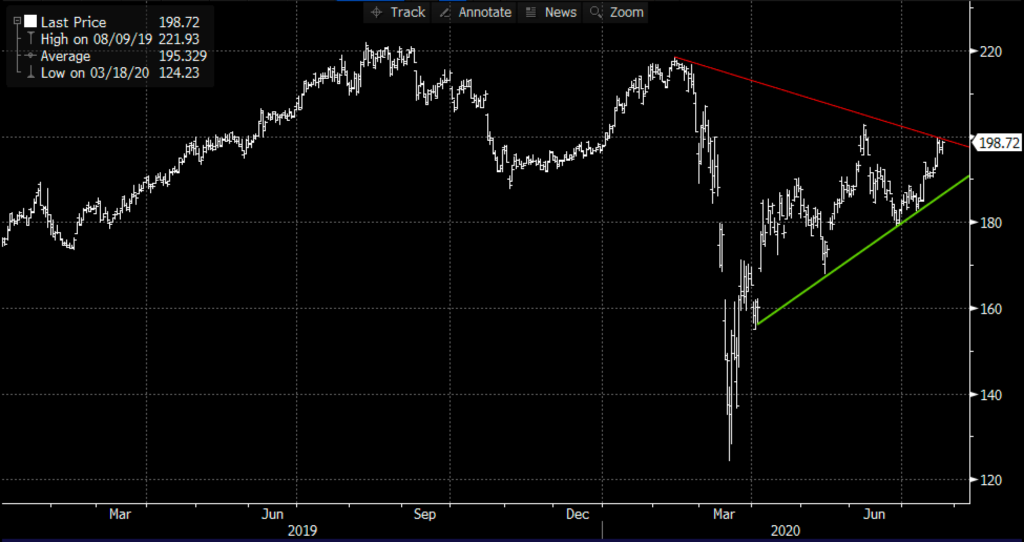 Starbucks (SBUX) has been a real laggard, down 14% on the year, and down 25% from its 52-week highs made last summer. Implied move for earnings is about 4% which is a tad rich to its 4 qtr avg of about 3.5%. Nast downtrend and key support near $71: 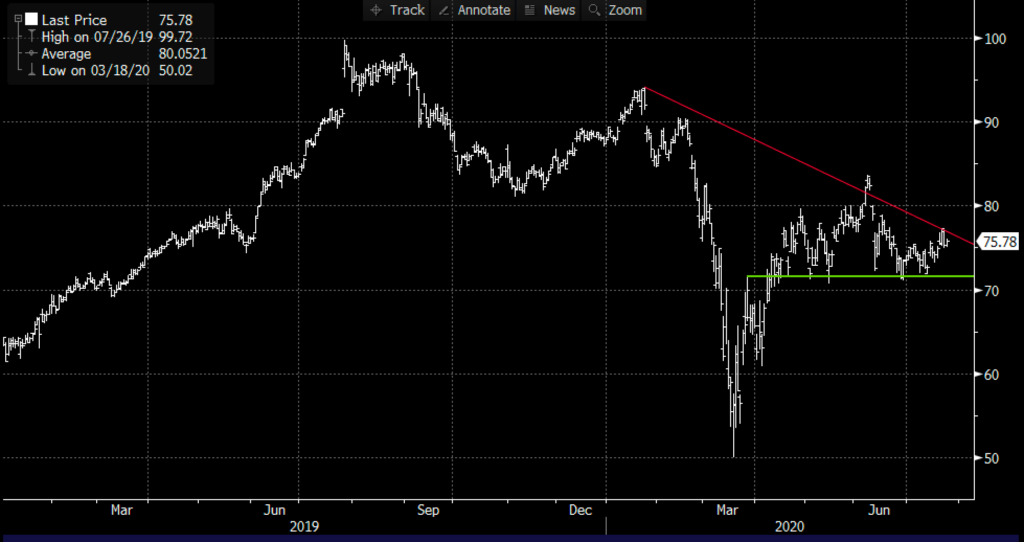 Pfizer (PFE) has had a nice run of late on optimism about the prospects of their Coronvirus vaccine that is in trials and have entered a pact with the U.S. government to deliver $2 billion worth at $20 if it works,

FOMC meeting… expect more dovish talk, but honesty about the pace of recovery.

Boeing (BA) before the open, implied move in the options market is about 5% vs the 4qtr average of about 3%. Despite BA’s 100% gains off of its March lows, the stock is still down about 50% on the year, and frankly the stock trades horribly. Investors are losing confidence that airlines will be flying at greater than 50% capacity anytime soon, that orders for planes will resume in a meaningful way and they suffer from continued regulatory scrutiny on their 737 Max. $170 to $165 is massive support, watch out below. 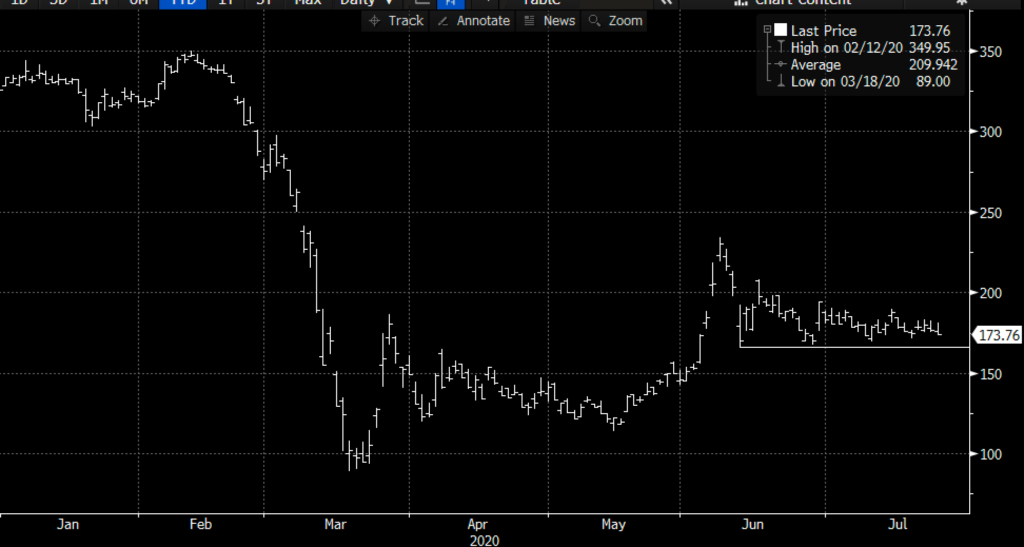 Facebook (FB) will set the stage for A-Day on Thursday. The implied move in the options market is nearly 7%, which is rich to its 3% average over the last four quarters but just a tad above its long term average of about 6.6%. The stock is down about 8% since making a new all-time high two weeks ago, but still up about 12% on the year. All eyes this week will be on its uptrend from the March lows, and the breakout level near $200 from May: 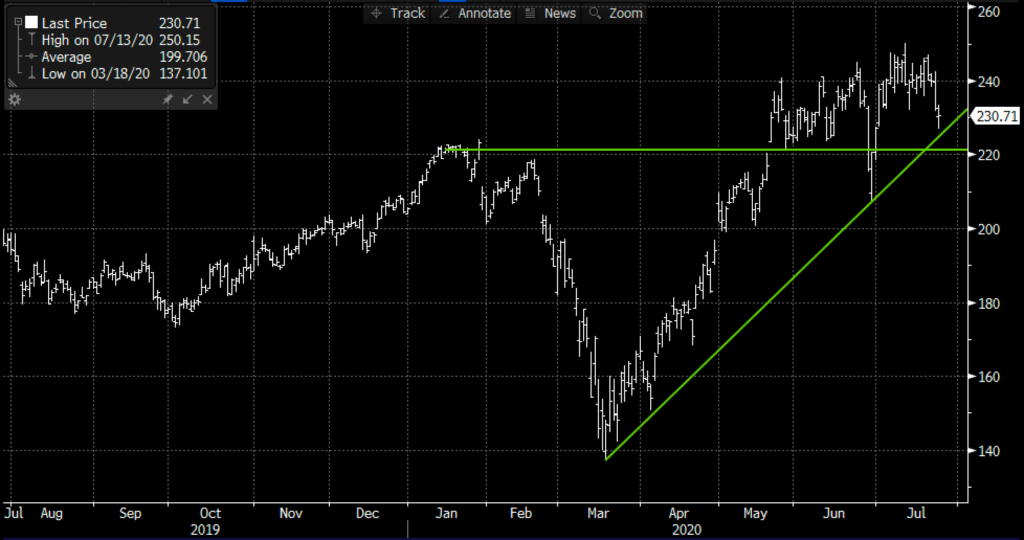 Paypal (PYPL): The implied move in the options market is about 7.5%, the stock has moved on average about 7% over the last four quarters, slightly skewed by the 14% gap to new highs following their Q1 results in late April. But the tock has been on a runaway breakout until recently, up 60% on the year and up 111% from its March lows. The sock broke below the very steep uptrend two weeks ago and that may serve to be formidable near-term technical resistance with no real support down to $140 the April gap. 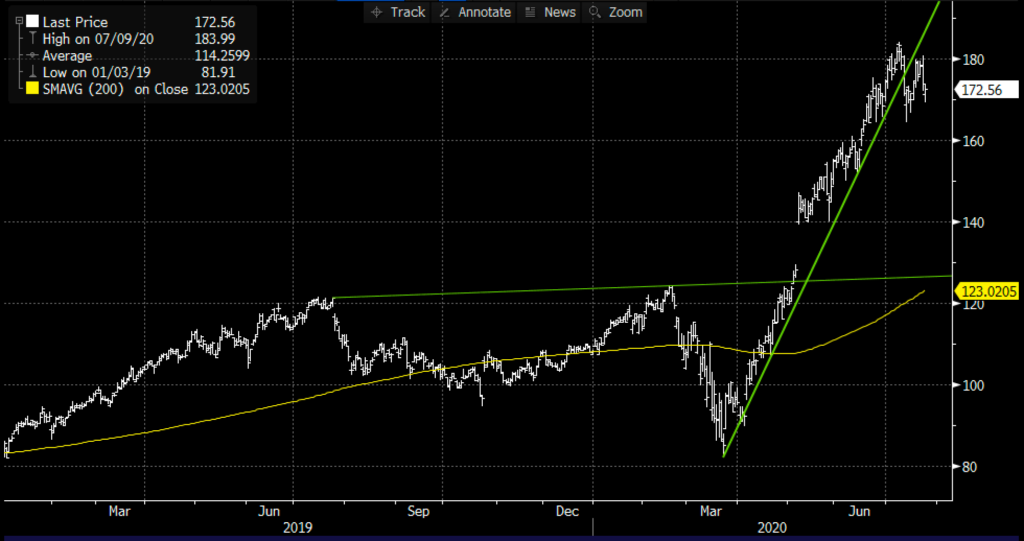 Apple (AAPL) – The implied move of about 5.25% is well above its four-quarter average move of only 2%. Since nearly kissing $400 two weeks ago, shares of AAPL have corrected, down about 8%, which is after Friday’s 3% rally off of its opening lows. The stock is up 26% on the year, but from a technical perspective on Thursday broke below its steep uptrend from its March lows, with support back near its early June breakout level near $328: 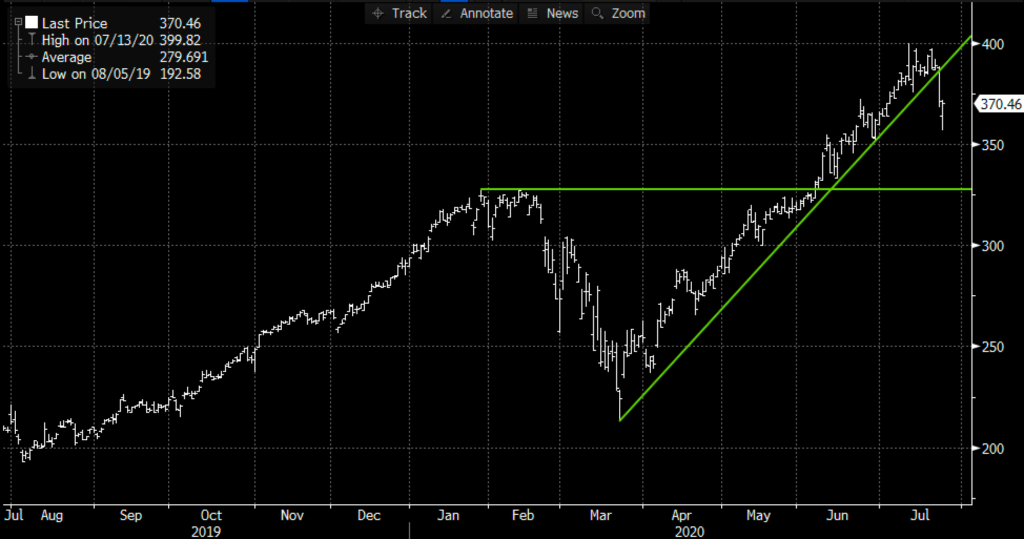 Alphabet (GOOGL) – the implied move in the options market is about 5.8% which is basically in line with its 5.5% average one-day post-earnings move over the last four quarters. The stock is up about 12% on the year, having earlier this month broken out to a new 52-week high but last week falling back below. Its uptrend from its March lows should serve as near-term support near $1465 while the prior highs of 1587 should serve as near-term technical resistance: 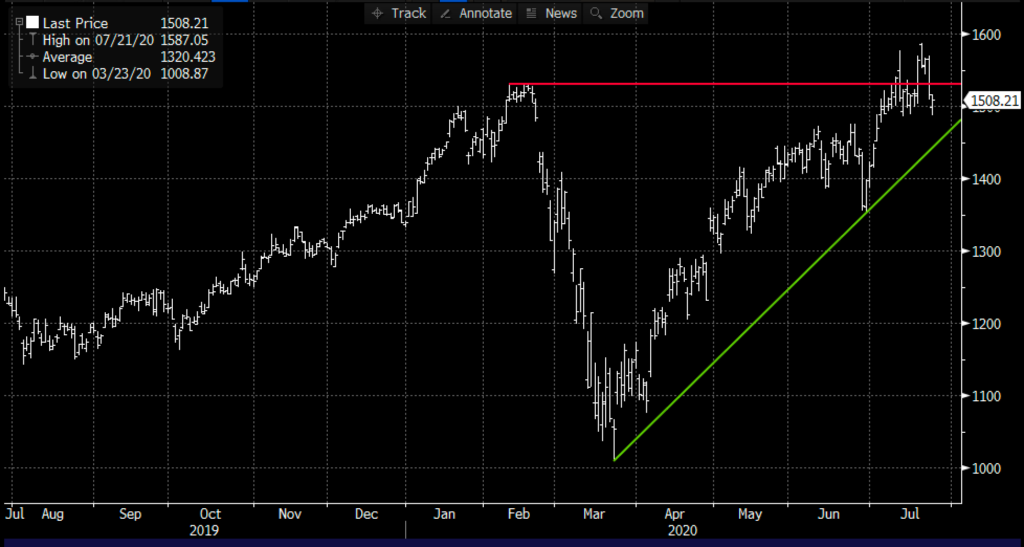 Amazon (AMZN) – the implied move in the options market is about 7.7% which is in line with its last two one day earnings reactions, one up, one down. After opening down on Friday, the stock staged a very impressive rally closing up 75 bps, up 4% from its lows. AMZN is up 63% on the year and up 85% from its March lows. To my eye, the only line that matters is that uptrend which it found support on Friday morning. A break below that on meaningful volume and the stock is on its way back to $2500: 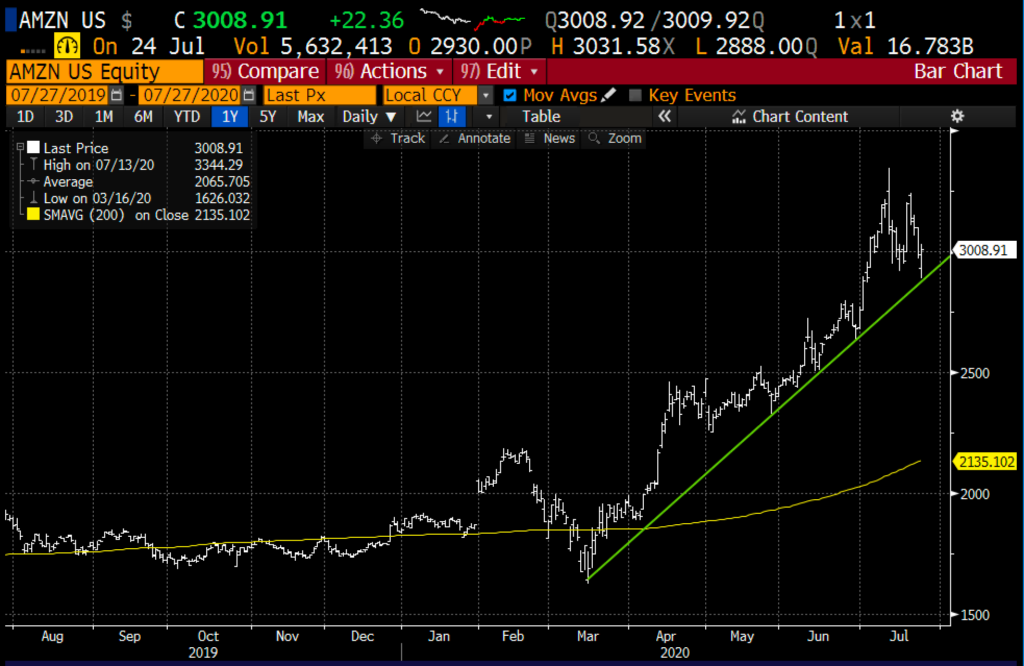 Friday – earnings before the open:

Caterpillar (CAT) – the implied move in the options market is about 4%, nearly double the stock’s 2.2% average one day move over the last four quarters. Shares of CAT have staged an impressive recovery from its March lows, up nearly 60%, despite the stock still being down about 7% on the year. The stock has been in a constructive uptrend making a series of higher lows and higher highs looking hellbent on making a run for the Jan highs near $150 on the slightest bit of good earnings news : 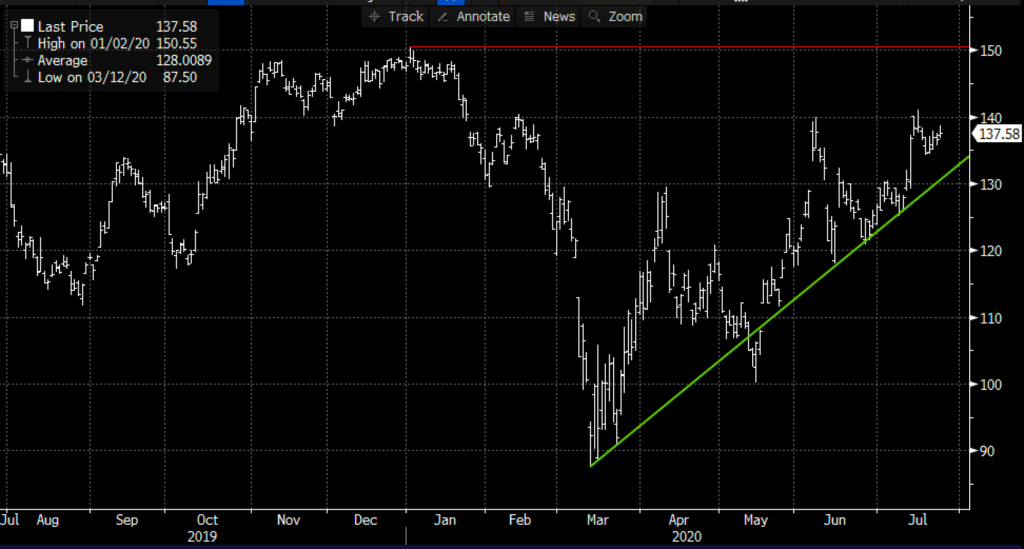 Exxon (XOM) – the implied move in the options market is about 4.5% which is a little rich to its 3.75% average one-day post-earnings move over the last four quarters. Shares of XOM are down 38% on the year, sporting one of the worst looking charts in the stock market in my opinion with key support near $41.50: 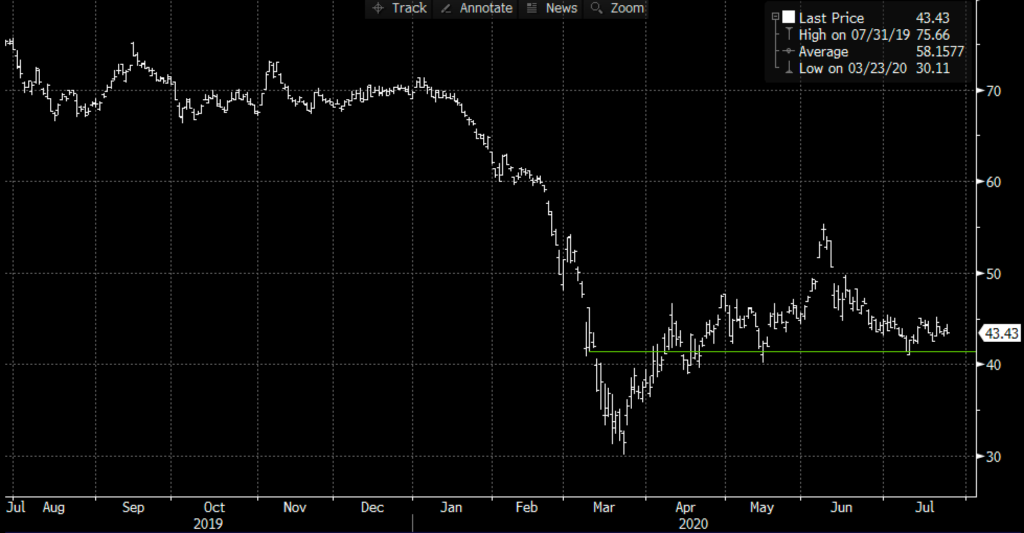