I hope you had a great weekend. Guy Adami and I are back with The Set-Up, what we will be watching this week and likely discussing each night on Fast Money:

Q2 earnings season starts in earnest this week with more than 40% of the XLF, the S&P Financials etf reporting:

Wednesday before the open:

Thursday before the open:

Friday before the open:

Bank stocks were getting destroyed on a relative basis to the broad market, which as you know is basically tech, this chart from BofA via @ChiGrl on twitter puts the recent relative performance in some historical context:

US #tech outperformance over US banks past 6 months biggest since 1999 tech bubble & 2008 GFC pic.twitter.com/CWPwamo2Mh

Friday the group had a massive move higher… last week on Fast Money and Friday morning on the open when Guy and I recorded Straight Talk we alluded to the fact that despite them trading very poorly, with sentiment so poor into earnings they set up as a very hard press on the short side. But my caveat is that if they bounce, and they get sold, watch out below for the broad market. On Friday, the XLF bounced on its uptrend from the March lows, its 50-day moving average crossed above its 100-day, which some technicians see as bullish with obvious resistance near its 200-day where it was rejected in June: 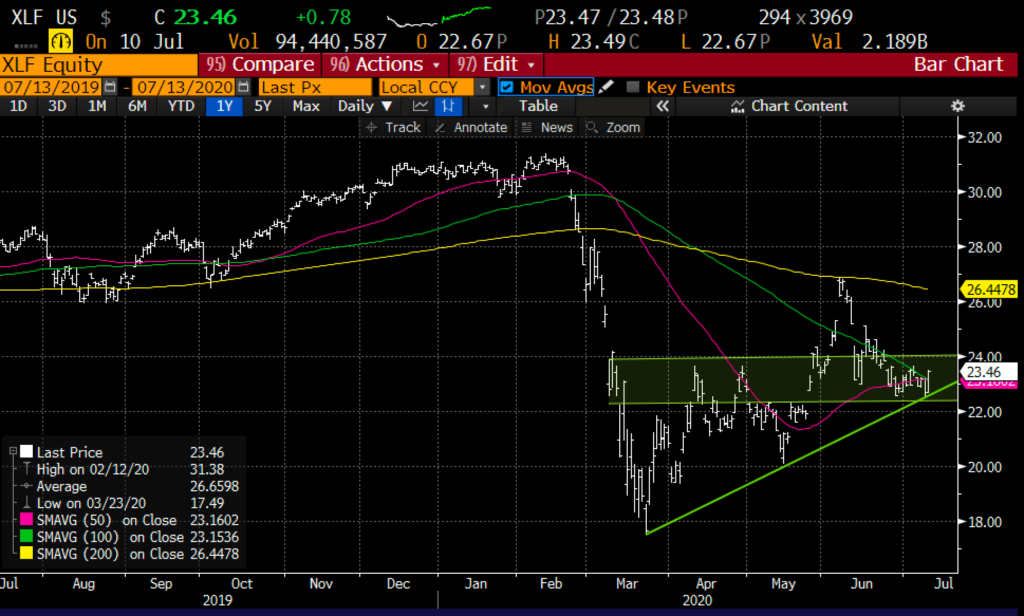 Aside from Banks, there are a few reports that stick out, Tuesday before the open, Fastenal (FAST) a construction supply company that is up 16.5% on the year, very near its recent all-time highs, will be interesting to see what sort of visibility they have. Also Tuesday morning, Delta (DAL), the stock is at the mid-point of its 4-month range between $17 and $37:

I suspect the big news with DAL will be just how many people they plan to furlough in the fall which will give investors a sense of just how slow their business is expected to come back.

IBM reports Wednesday after the close, the options market is implying about a 5.3% one day move the next day which is a tad rich to its 4.5% average over the last four quarters. The chart is horrid, down nearly 12% on the year, and down 25% from its Feb highs, the only thing worth listening for is their commentary on enterprise spending. 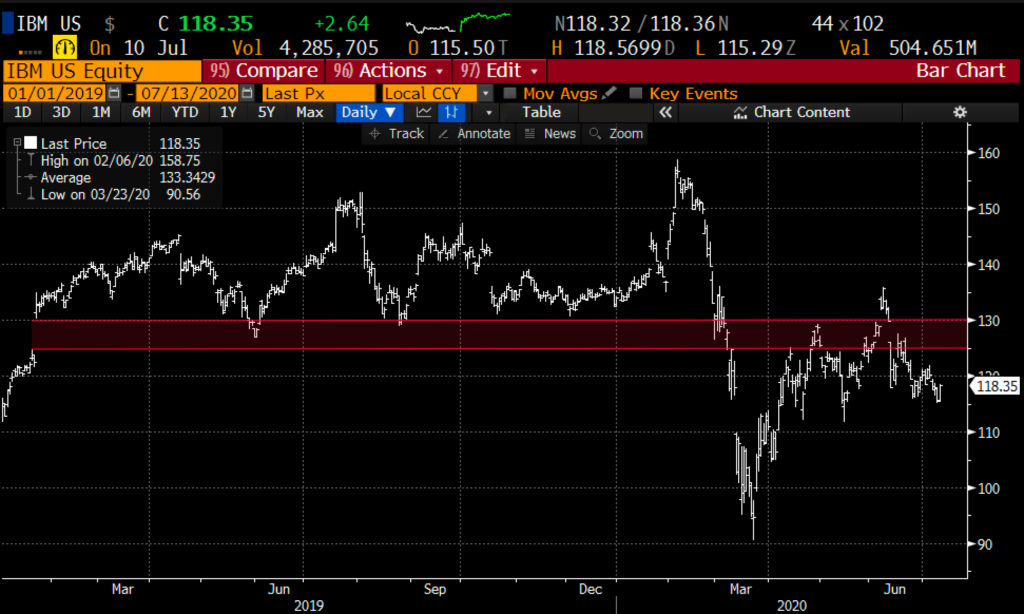 Thursday after the close Netflix (NFLX) will report its Q2, to suggest that expectations are high after Q1’s massive sub-beat is an understatement. The options market is implying about a $50 move in either direction on Friday, or about 9%, which is very rich to its 4.5% average one day move over the last four quarters but still below its 10-year average of about 12%. The stock closed up 8% Friday at an all-time high, placing the stock up nearly 70% on the year and up 90% from its March lows, now sporting a market cap of $241 billion. There is NO overhead resistance, but near-term support seems fairly obvious down near the recent breakout to near all-time highs above $425 or so: 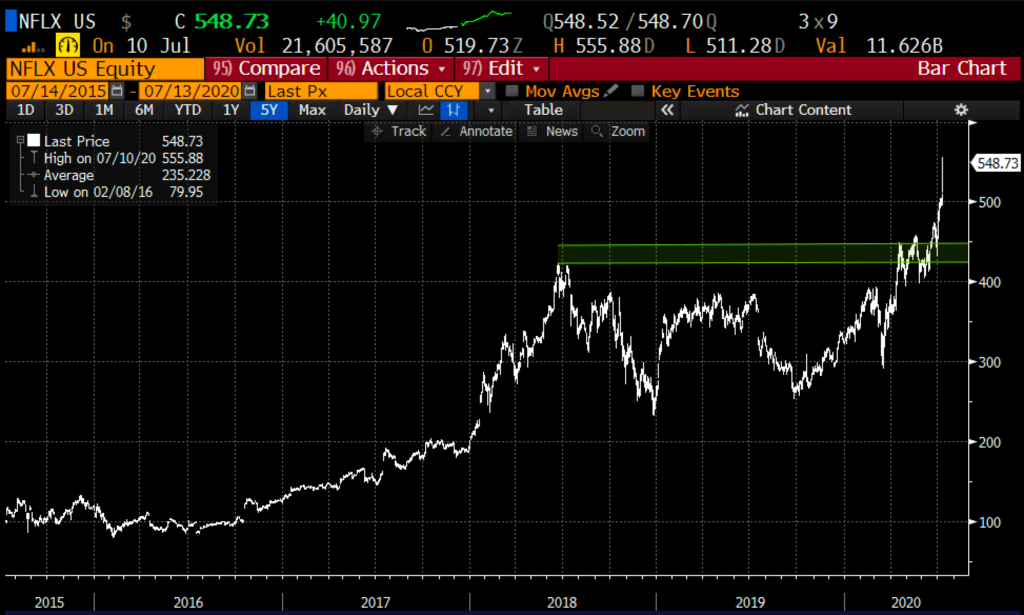 Lastly, Johnson & Johnson (JNJ) will report Thursday after the close, the options market is implying a 2.7% one day move, which is basically in line with its four-quarter average. The stock was one of the first Dow stocks to make a new high following the March crash, but since mid-April is down about 9% in a well-defined downtrend. Better than expected results and guidance, I suspect the stock breakout above that downtrend possibly on its way back to the prior highs. But a miss and weak guide and the stock is on its way to the low-end of the trend in the mid $130s. If you think the stock will move Friday, the at the money call or put only cost half the implied move, or less than 1.5%. 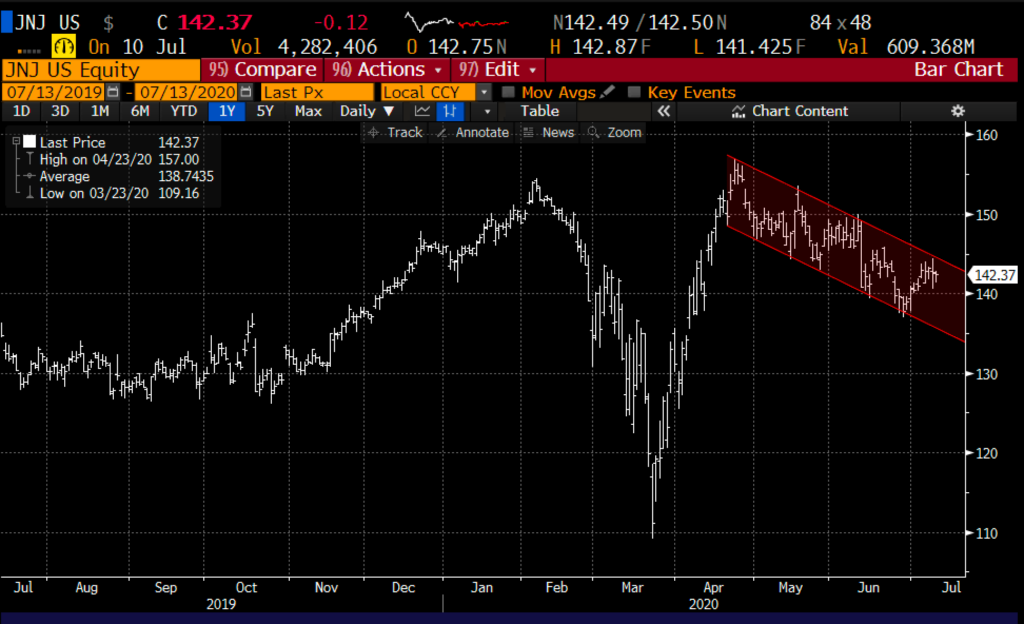 As for the SPX, if earnings are not as bad as expected, and there is the slightest bit of decent visibility, cautious optimism, the SPX looks poised to test that prior high just below 3400: 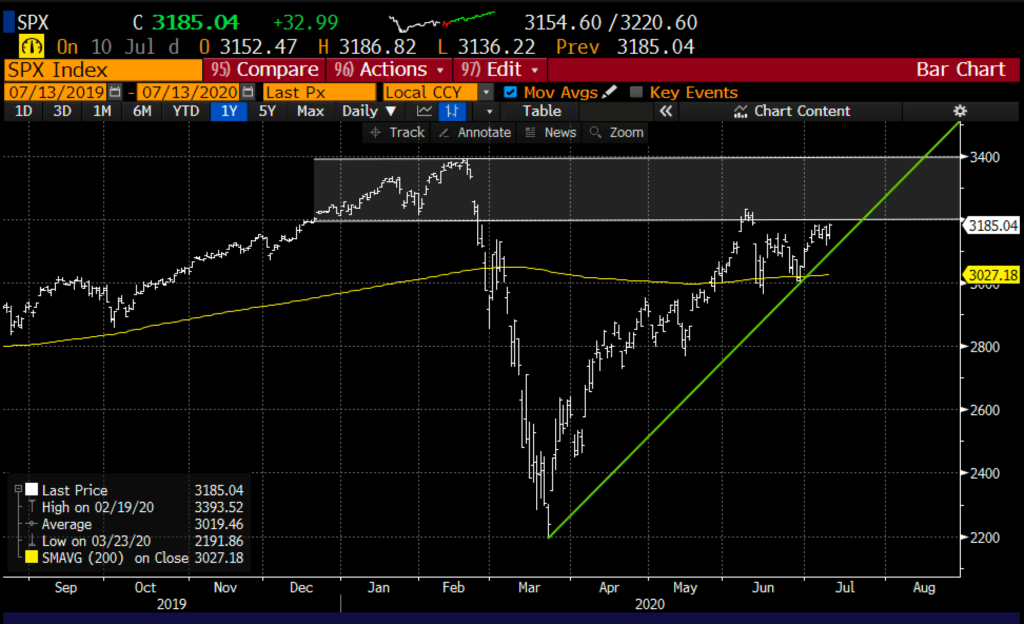 This seems insane to me given the way the virus is raging across the country. And yeah there are some decent headlines like NYC had its first day since mid-March without a new coronavirus case, but that does not make me that optimistic as hundreds of thousands of residents and visitors that would normally be here are not here and sadly I wonder if schools and businesses open too quickly after the summer if we will be bracing for a second wave. I suspect sports leagues have a rocky go with MLB and NBA set to start soon and who knows what happens with the NFL as it would appear that college football might be out of the question already.

And the panic buying in the largest stocks in the Nasdaq 100 make me just a tad nervous, the conditions resemble pre-crash times of yesterday year. 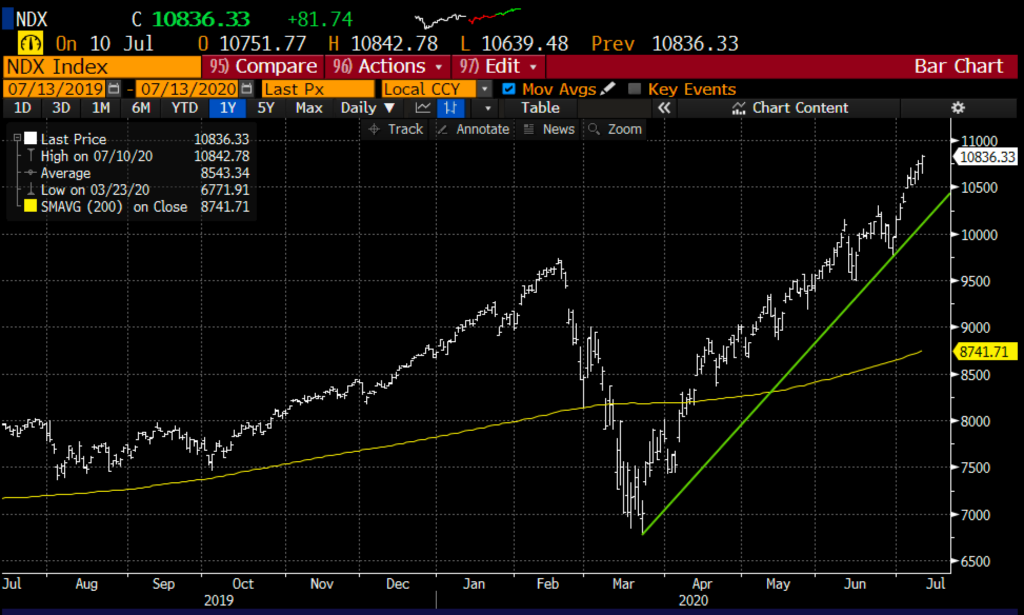 F’MAGA make up 47% of the weight of the Nasdaq 100, and its not just the concentration but obviously the performance of those top names, per @itzstockchartz: 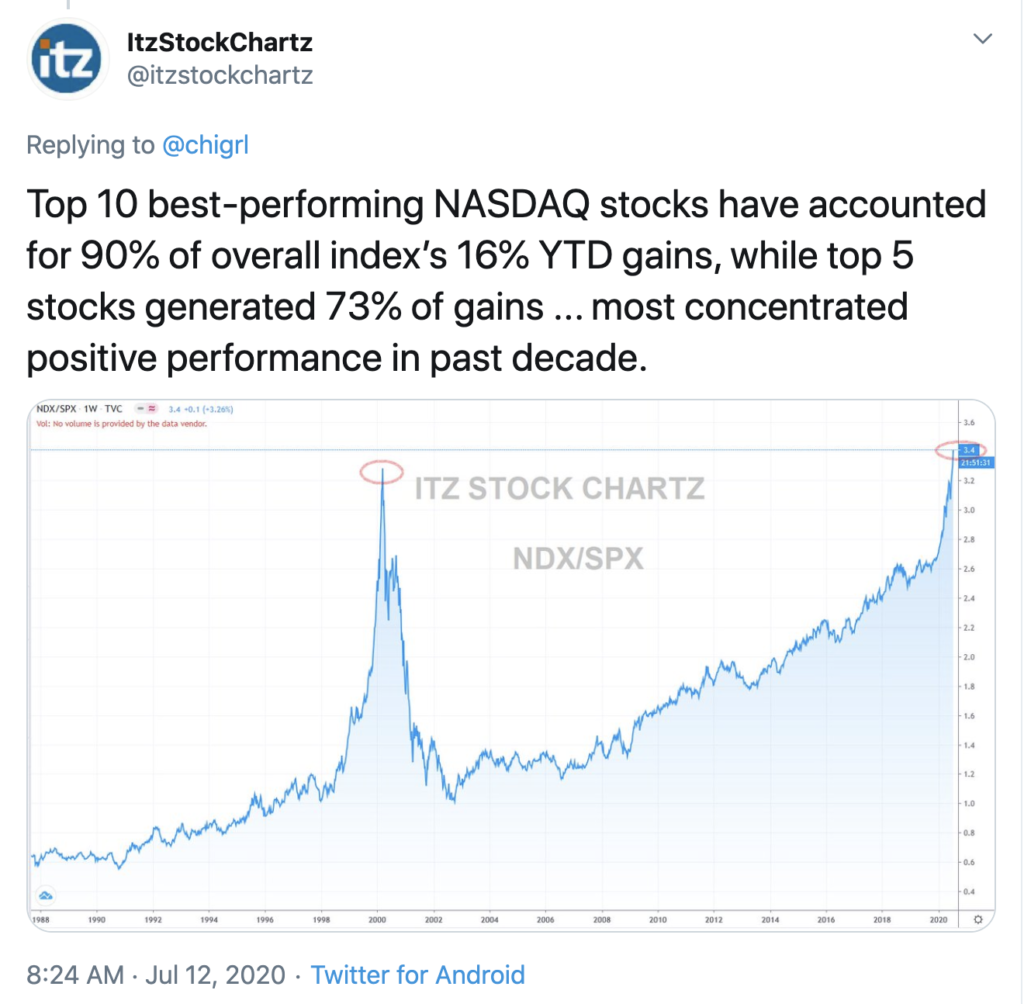