Earlier today Guy Adami and I discussed the set-up in bank stocks into earnings this week.

Here are the names, dates and implied moves for the week:

Wednesday before the open:

Thursday before the open:

Friday before the open:

This group above equals about 40% of the weight of the XLF, the S&P FInancials etf .On Friday the group mounted a fairly impressive reversal after what felt like weeks of declines and horrid relative under-performance with most of the XLF components rallying more than 5% with mild follow-through today: 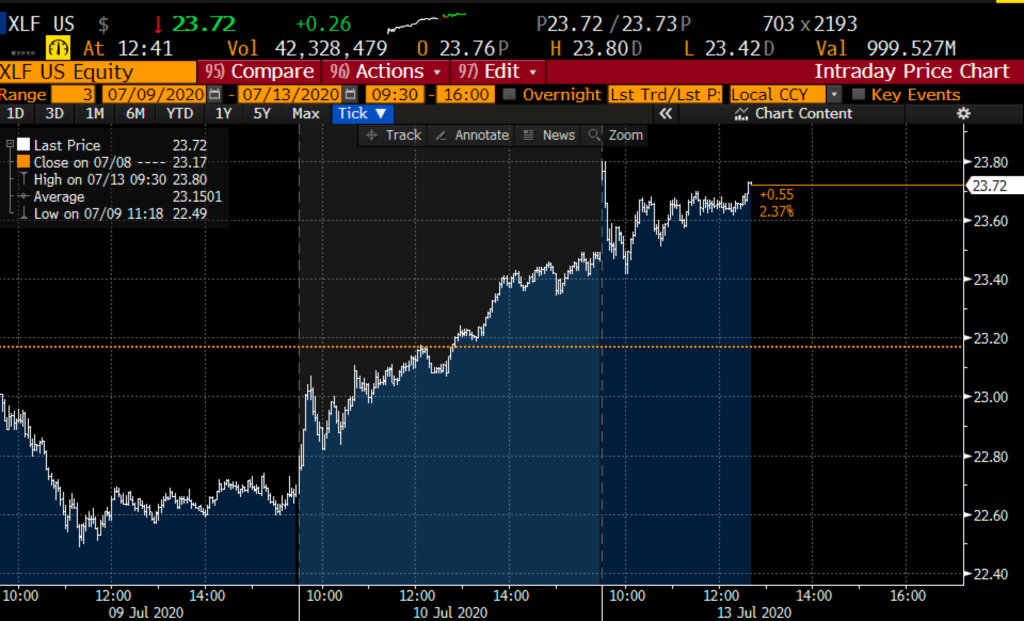 It is worth noting that short-dated options prices while elevated as most are relative to pre-pandemic levels with 30-day at the money implied volatility (blue line below) is still below realized volatility (how much the etf has been moving, the white line below), so for those looking to express directional views with options, they don’t look that expensive on a relative basis, especially when you consider the recent price action and the poor sentiment:

The chart is pretty simple. Just bounced off of the uptrend from the March lows (support) and has resistance just above current levels. A breakout on better than expected news on the earnings front and the XLF is on its way back towards $26.50, near its June rejection at its 200-day moving average: 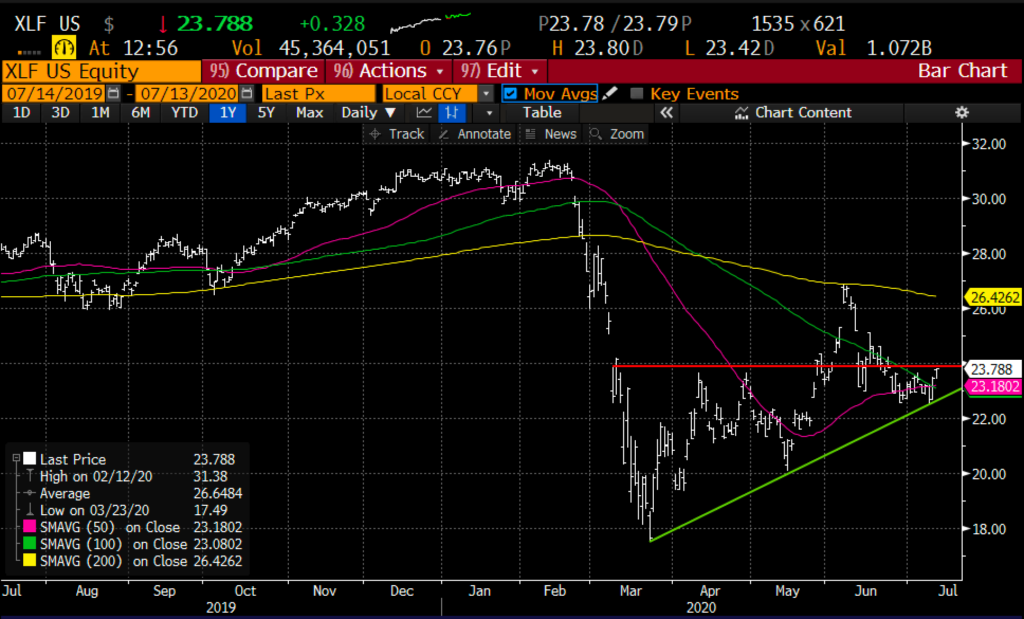 Bad sentiment, cheap stocks, the rest of the market is saying that the economy is coming back… the only thing holding back the SPX from new all-time highs is for the banks to signal the all-clear! Obviously low rates and flattish yield curve hurting the money-center banks and their exposure to defaults, bankruptcies, and their need for large loan loss reserves. They are the ones exposed to the U.S. consumer, housing, small businesses and bad debt from large corporations. On the flip side the investment banks like Morgan Stanley and Goldman Sachs act very differently, as they are exposed to the parts of the economy that have been buoyed by both fiscal and monetary stimulus resulting in massive trading volumes, restructurings, equity/debt issuance and now maybe a round of M&A.

If the money-centers don’t rain in the parade and their outlooks do not meaningfully differ from the sentiment post the Fed Stress tests last month, then the stocks could clearly rally. But if they are worse even with poor sentiment and cheap valuation they could be a signal that the second half might be a bit different than the record second quarter for Nasdaq stocks

If I were inclined to play for a breakout I might consider the following defined risk trade idea:

Rationale: this trade idea risks 2% of the stock price for a little less than 2 weeks with a potential payout of 6.3% if the etf is up 9.5% on the close on Friday, July 24th.

Or If I were inclined to fade whatever happens this week after earnings in the group and play for a break of the uptrend and a re-test of the June lows near $20 I might consider a put spread in August allowing for some time for this to playout:

This is a tough call on the short side given the weak sentiment. It almost makes the most sense to sell whatever rally that might materialize or sell weakness if it doesn’t…