Last night on CNBC’s Fast Money we had famed hedge fund manager Mike Novogratz on the program giving his macro outlook, watch below, it was his comment about Tesla (TSLA) that I found interesting, especially given the fact that he is not a “stock guy”:

“courageously tried to short TSLA…felt like 37% in three days was too much, picking some spots trying to very short term”

The set-up is ‘perfect’ for gold right here, says @novogratz after the yellow metal hit highs not seen since 2011. Here’s why he’s bullish on gold and bitcoin right now. $GLD #bitcoin pic.twitter.com/w2do3gbHvq

In the second hour of Fast Money we picked up on Melissa Lee’s question to Novogratz on TSLA, paraphrasing “trading the market we have…. playing the upward momentum whether it be in the stock market or in names like TSLA”.

My answer in the clip below starting at 3 mins in. Again paraphrasing “we have never seen a move like this before, and when it comes to the unexplainable, and your money sometimes it is best to just avoid them altogether”

Is Nikola the next Tesla? Our traders answer. $NKLA $TSLA pic.twitter.com/UwwLNroRo5

We have been taking viewer questions this week, but unfortunately, we did not to this one… so I thought I would take a crack at it:

So how would I play it knowing the next identifiable catalyst will be their Q2 earnings on July 22nd after the close and the implied move in the options market is about $236 or about 18% in either direction.

If I wanted to express a defined risk bearish view I would consider a put spread, risking what I am willing to lose as there is not telling when the stock’s upward momentum will abate, and it has been violent, but it feels like the fever has broken for now. The company announced better than expected orders last week that caused the melt-up, but it is worth noting that CEO Musk’s comments today about the company hopefully achieving full autonomic driving this year has not caused a rip higher.

The stock has fairly staunch technical support near its recent breakout level near $1000, which would be near-term downside target: 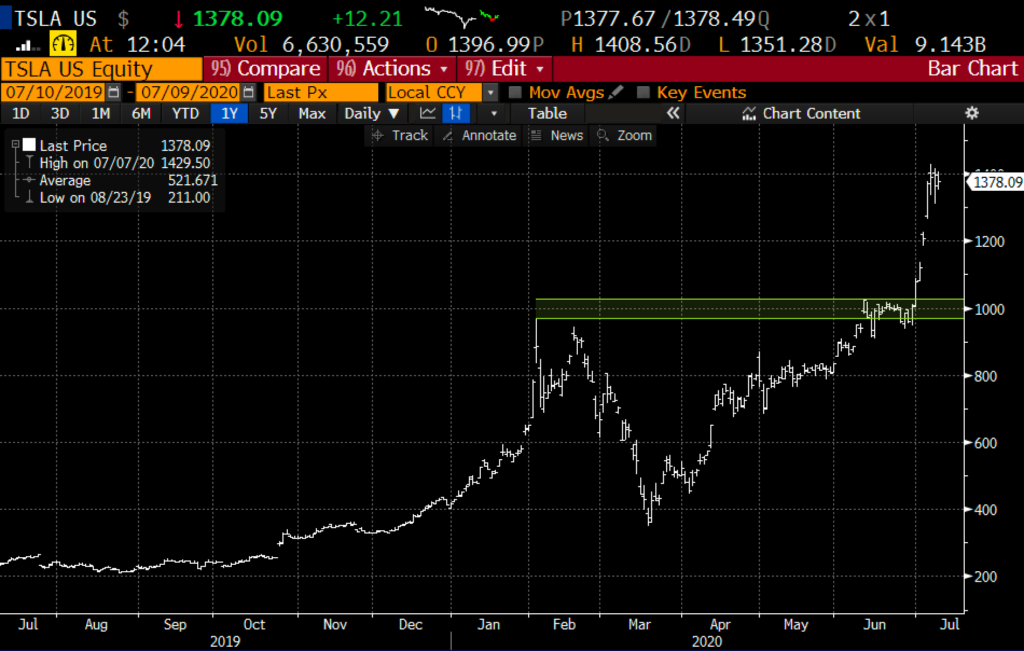 If I were inclined to play for a continuation of the parabolic move I might (BUT I AM NOT, not with my worst Twitter troll’s money) just set and forget a call spread looking out to year-end, considering paying $155 for the Nov 1500 -2500 call spread. This trade idea risks 11.5% of the stock price, breaks-even up 20%, and has a max gain of 61% if the stock is up 82% on Nov expiration. Yes this is all getting completely mental.