I think it is fair to say that investors bought the rumor of the reopening, now the trillion question is whether or not they will sell the re-closings as the coronavirus spreads through much of the south and the southwest which is fairly reminiscent of the dramatic situation in the northeast back in March and April that caused the lockdown to begin with. I like all of you am extremely happy that the fatality rate of those infected is much lower than it was in prior hotspots like the NY metro region in the Spring, but it seems that while we are not likely to go back in lockdowns, we are likely to see the private sector and schools be very careful about the length to which they will fully re-open. It is also worth noting that while investors have keyed on the better than expected May and June non-farm payrolls, they might mask the fact that continuing claims keep rising by more than 1 million a week and despite the trillions thrown at the relief response for workers, encouraging employers to keep them on to bridge to the otherwise of the lockdown, expanded unemployment benefits will run out and we are likely to see higher structural unemployment for at least the next year, which will likely dampen discretionary consumer spending.

Which leads me to travel. It’s done in the U.S for a while through commercial means. At the moment U.S. residents can not travel to the EU and many states have established quarantines for travelers from other specific states. Oh and business travel, say hello to your Zoom screen, stuff is getting done without face to face, IPO roadshows, M&A, heck Congress is even functioning at their normal brain-dead pace.

Stocks like Expedia (EXPE) and others in the hospitality sector obviously got murdered in March once it becomes clear that most countries would be on lockdown, EXPE lost 66% of its value from its highs in February to its lows in March. It is worth noting that when EXPE started selling off in Feb it was already down 25% from its all-time high made in mid-2017. From a technical perspective the March breakdown completed a massive head and shoulders top formation that had been building for the last five years: 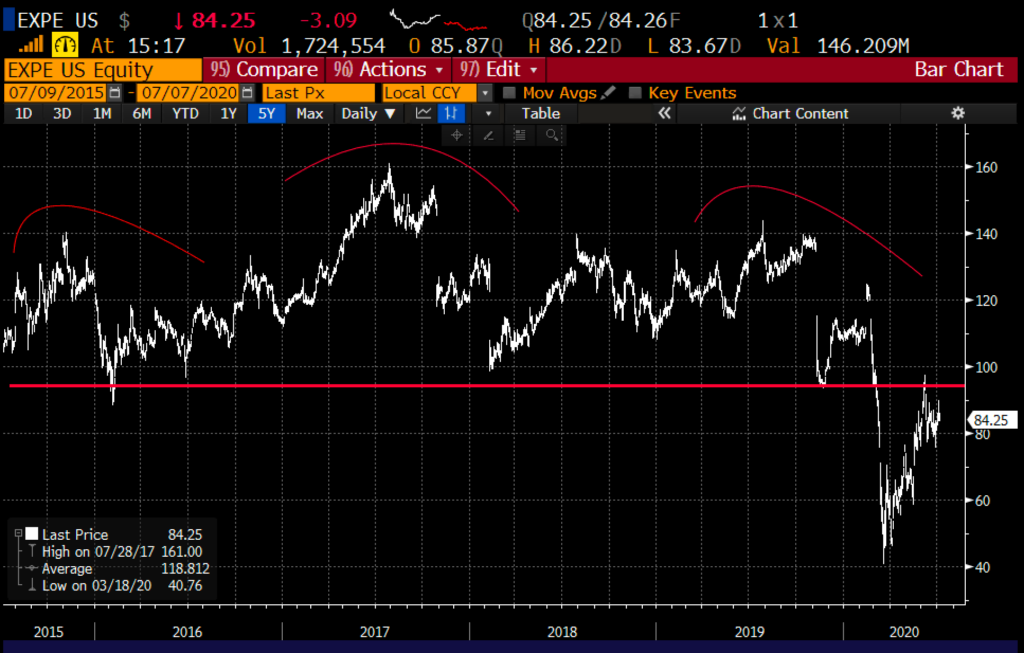 While the $90-$95 area served as massive long-term technical support, now serves as healthy technical resistance which the stock was just rejected at.

This headline from this morning regarding United Airlines (UAL) employees was kind of the death knell of the travel stocks in my opinion for at least the balance of the year:

It is not just that the summer travel season or that business travel is toast, but the headlines about colleges planning to do full remote-learning, bans of people from other countries, sports with no spectators, no broadway, concerts, social distanced events of all kinds etc…massively reduce the travel use cases until we have herd immunity, mass therapies or vaccines.

The next identifiable catalyst for EXPE will be its fiscal Q2 earnings which should come the last week of July and with the stock’s rally 140% from its March lows to its June highs and being rejected at the breakdown level (also its 200-day moving average), and now threatening the uptrend from the lows, the stock looks poised to retrace a good bot of the move on the slightest bit of bad news. 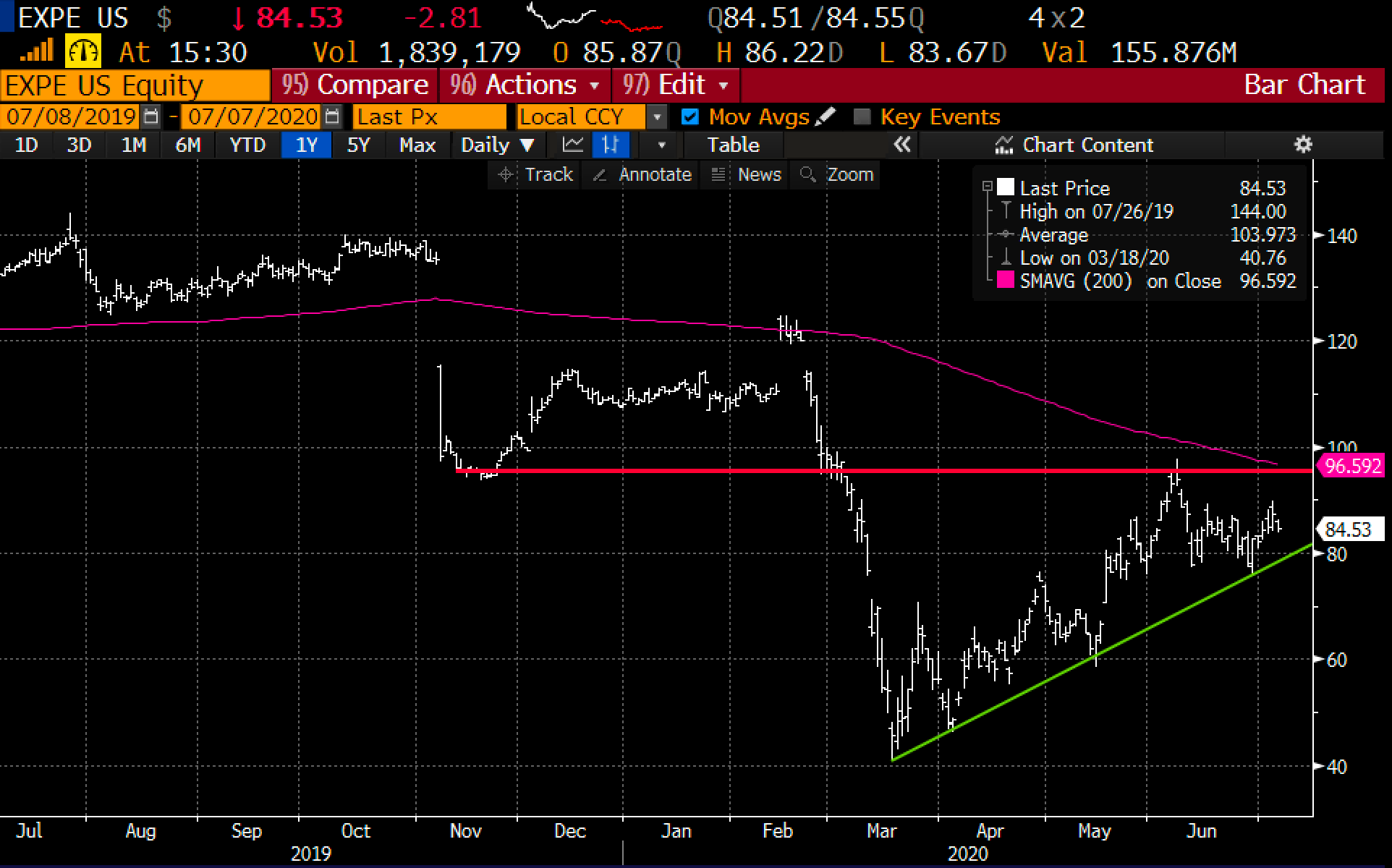 Rationale: this trade idea risks ~5% of the stock price with a break-even down 10% in about a month and a half. If you are of the belief that travel and hospitality related stocks which are still down a lot from their 2020 highs, but up an unwarranted amount given the lack of visibility on the pandemic, stocks like EXPE have lower lows in the coming months as investors price a total wipeout for the balance of the year.