Guy Adami and I are back with The Set-Up giving you a brief preview of what we are focused on in financial markets in the holiday-shortened week ahead.

Here are our notes and charts from the segment:

The S&P 500 (SPX) closed below its uptrend from the March lows, but also below its 200-day moving average. 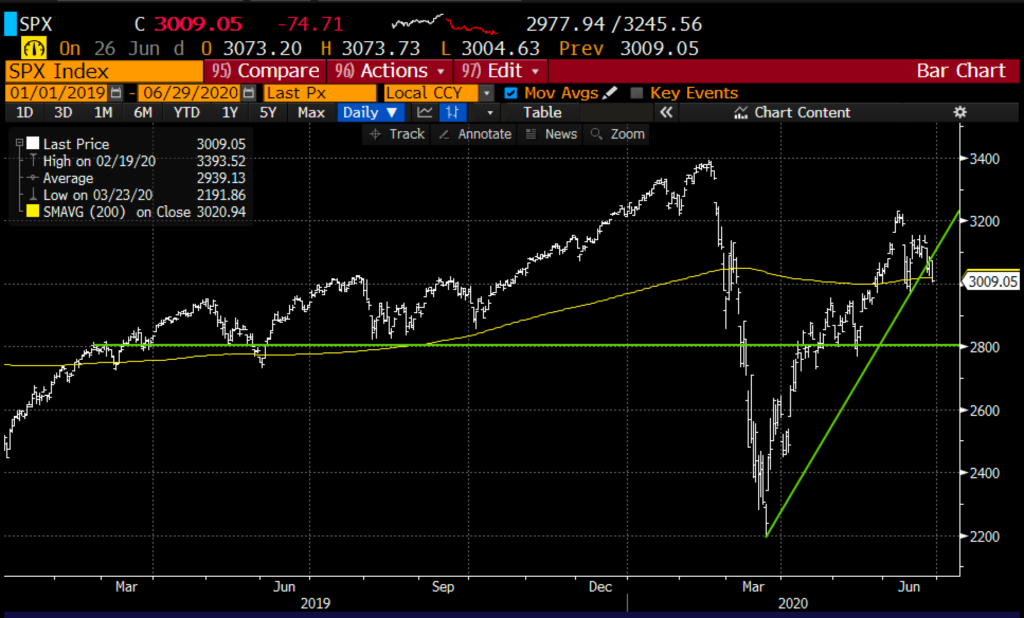 10-Year Treasury Yield on its way to zero (or below), as we discussed two weeks ago on The Set-Up will NOT be bullish for equities. Keep a close eye on the March 9th all-time closing low of 50bps and of course the intraday low of 31 bps: 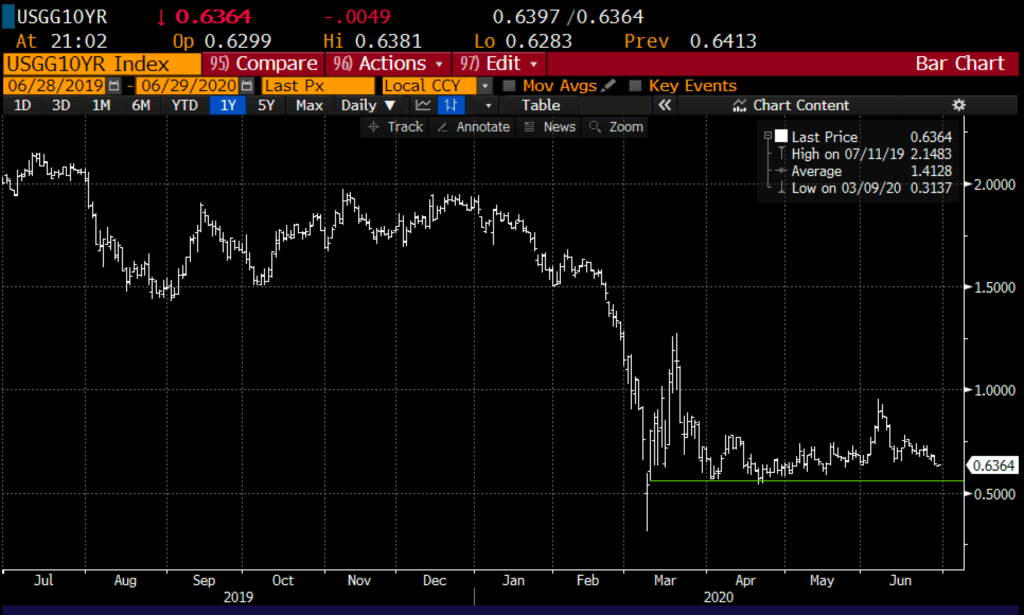 Big Stories from last week that will remain impactful this week…

The social media advertising ban by many large advertisers has caused Facebook (FB) to drop 15% from an all-time high made just last Tuesday or nearly $75 billion in market cap. EPS is expected to decline by 15% in 2020 while sales are still expected to rise by 9%, both expected to rebound sharply in 2020. Stock trades 30x & 23x respectively. The company has routinely been on the defensive about issues relating to hate speech and their unwillingness to police its platform, the coronavirus spike bought their stock some leeway to get things right with large advertisers despite them making up a small percentage of their 8 million brand advertisers. 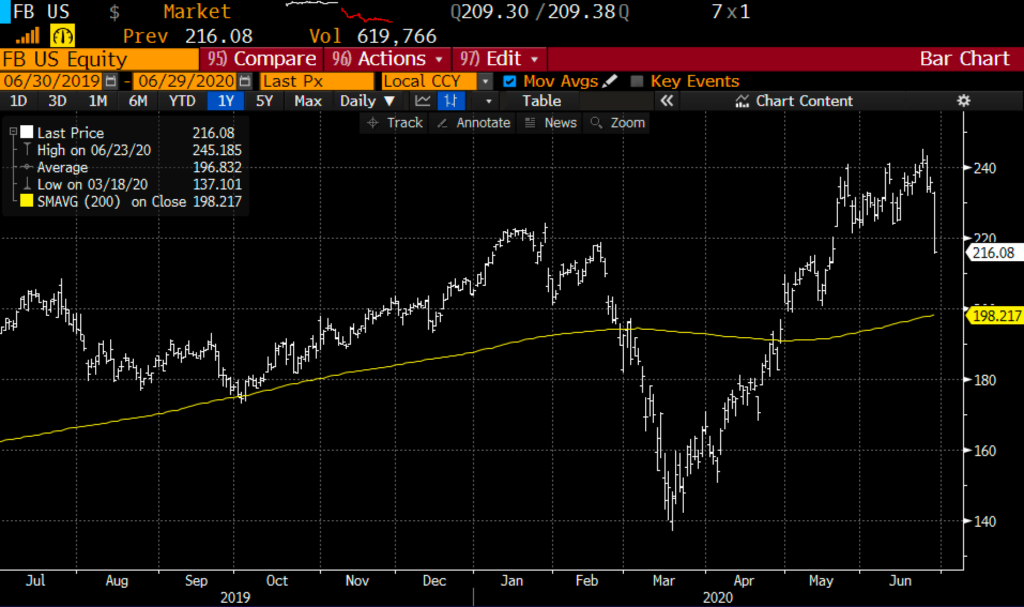 Which of course leads us to bank stock’s which lead on the downside on Friday, all of the major U.S. banks were down more than double that of the SPX’s 2.4% decline, with Goldman Sachs (GS) hit the hardest down 8.6% and most importantly JP Morgan (JPM) down 5.5%. 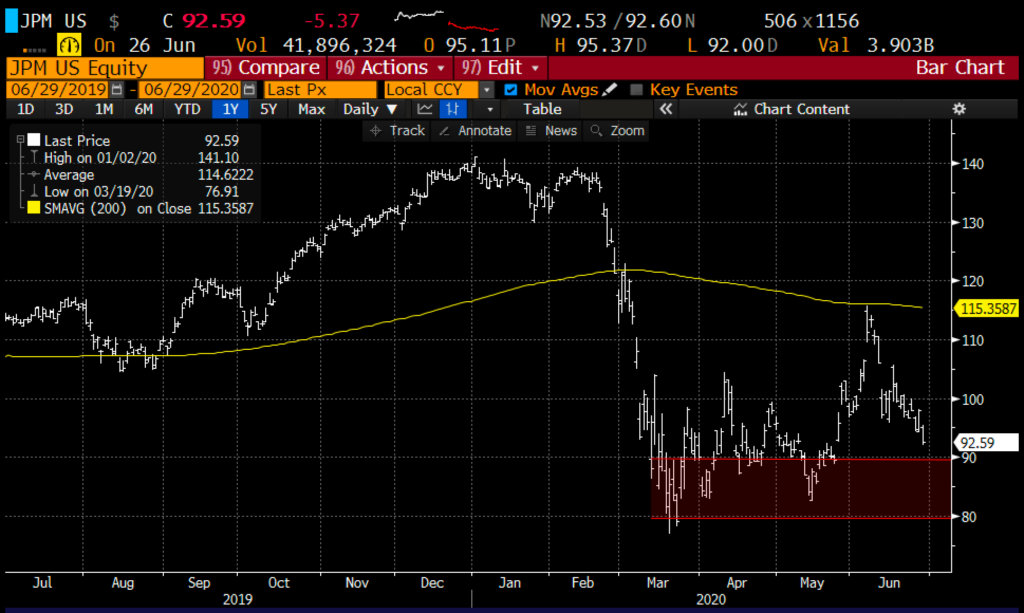 We are going to discuss some economic data due out later in the week, obviously, the June Jobs report is gonna be the main event after May’s mysterious increase, but that coupled with ISM and Fed Minutes we might start seeing small-cap stocks pricing in a rockier road to recovery… watch the Russell 2000 (RTY): 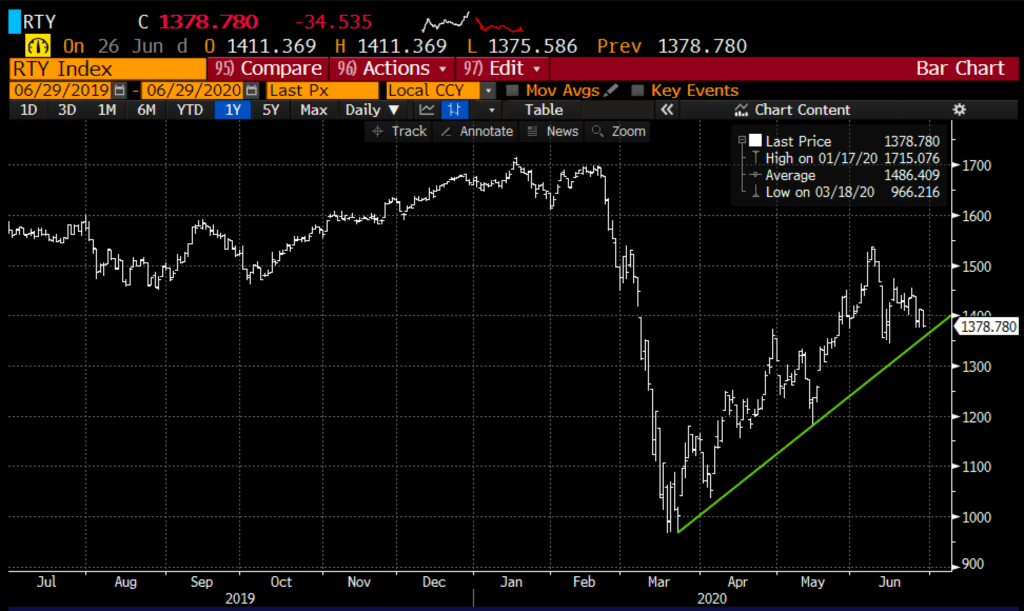 ISM releases its Manufacturing Purchasing Managers’ Index for June. The consensus forecast is for a 49 reading, up from 43.1 in May and 41.5 in April.

The Bureau of Labor Statistics releases the jobs report for June. Economists expect it to show that 3 million nonfarm jobs were added and that the unemployment rate fell to 12.2% from 13.3%. This follows a 2.5 million gain in nonfarm payrolls in May—a stunning number, as nearly all forecasts had called for a large decline.

The Department of Labor reports on initial jobless claims for the week ended on June 27. Jobless claims have fallen for 12 consecutive weeks, since peaking at 6.9 million in late March, but remain well above one million—a record high before this year.

Micron (MU) will report its fiscal Q3 earnings today after the close. The options market is implying about an 8% move in either direction between now and Thursday’s close, which is about the average the stock has moved following its last four earnings reports.

Shares of MU are down about 10% on the year, and down about 20% from its 52-week highs made in February. The one year chart below shows the stock breaking below two key technical support levels, first its 200-day moving average and also the uptrend that has been in place since its March lows: 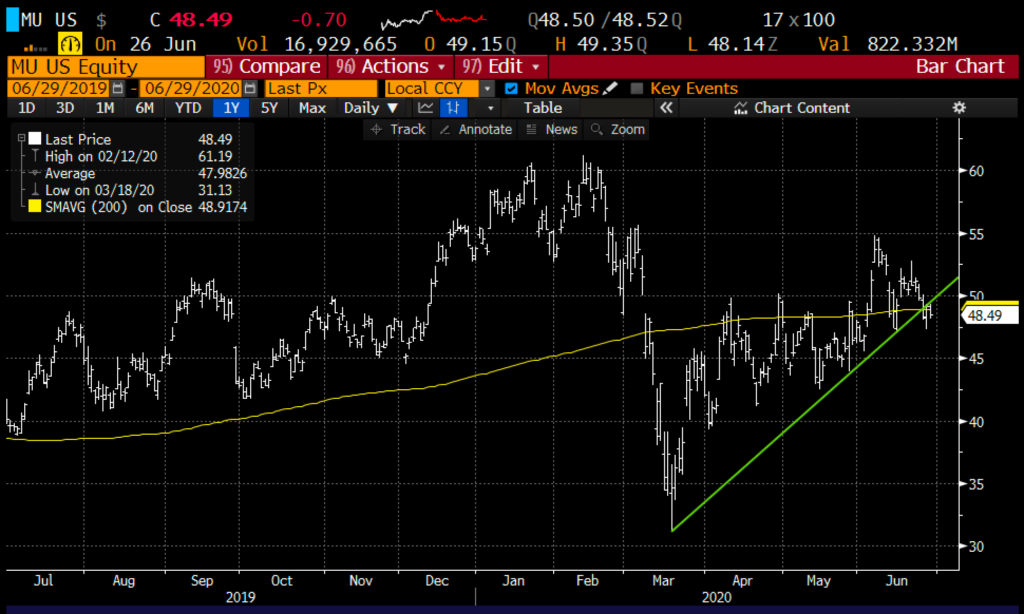 FedEx (FDX) will report its fiscal Q4 results. The options market is implying about an 8% move for earnings which is about the average the stock has moved following its last four earnings reports. Shares of FDX are down about 14% on the year and down about 28% from its 52-week highs made last July and down 53% from its all-time highs made in January 2018. This month the stock was rejected at technical resistance which was the combination of its downtrend and its 200-day moving average: 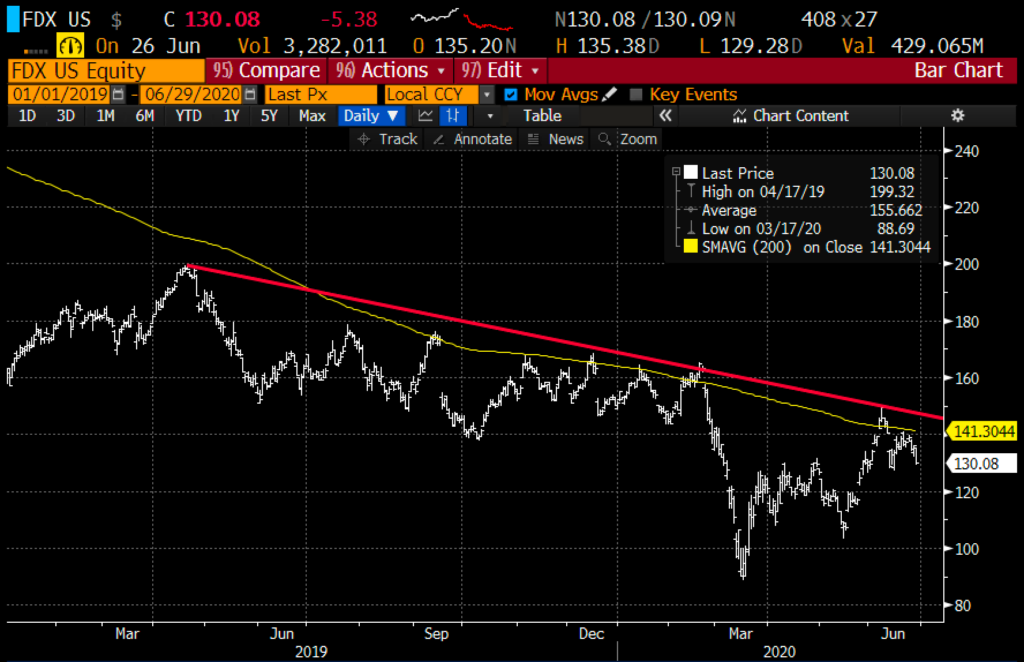 One last thing we did not hit in the video… but keep an eye on Zoom (ZM) which is up 70% in a month, up 270% in the year, up 600% since its April 2019 IPO, sporting a $72 billion market cap and trades 40x this year’s expected sales $1.8 billion in sales and 32x next year’s expected $2.25 billion. Great product and service, they have pulled forward tons of demand, needs to grow into this valuation, great sentiment gauge in my opinion, when this one breaks to the downside you will likely see a massive snowball effect in other high growth, high valuation stocks that have been perceived winners of the pandemic. 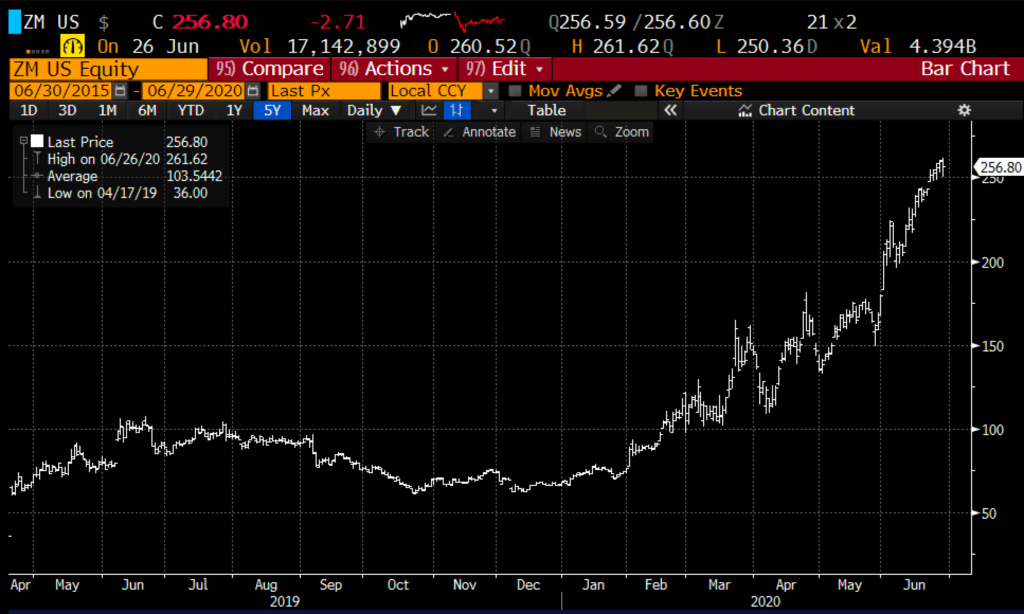