Today after the close Micron (MU) will report its fiscal Q3 earnings. The options market is implying about an 8% move in either direction tomorrow, which is essentially in line with its four-quarter average.

Share of MU are down more than 10% on the year and down 20% from its 52-week highs made in February, and below two key near-term technical levels, the uptrend from the March lows and the stock’s 200-day moving average: 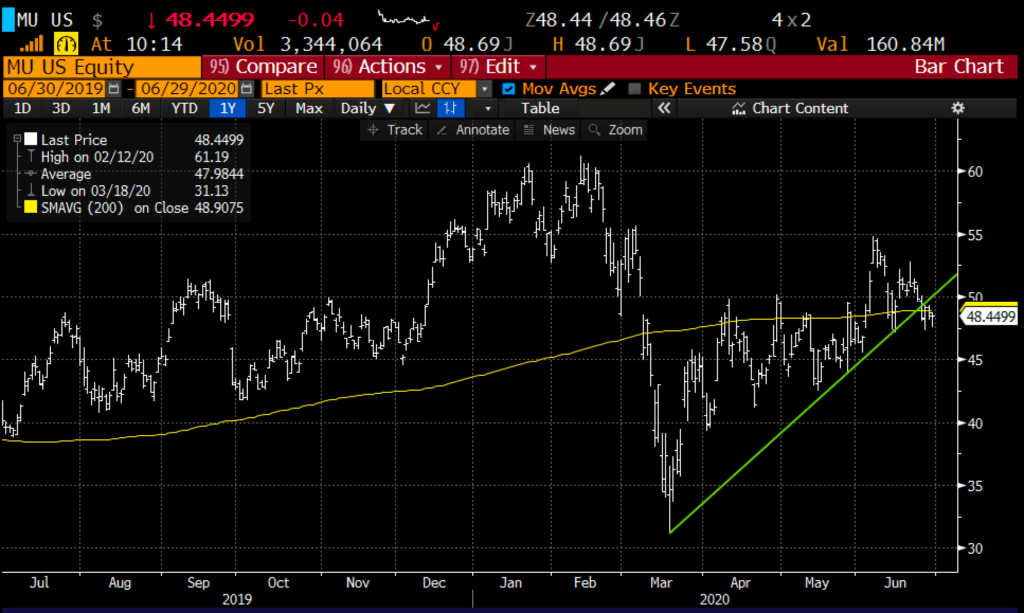 Wall Street analysts are fairly positive on the stock with 26 Buy ratings, 7 Holds and only 1 Sell with an average 12-month price target of $61.65.

For the fiscal third quarter, Micron now sees revenue of $5.2 billion to $5.4 billion, with non-GAAP earnings of 75 to 80 cents a share. Two months ago, when the company reported February quarter results, the Micron had been projecting revenue of $4.6 billion to $5.2 billion and non-GAAP profits of 55 cents a share, give or take 15 cents. Street consensus had been $4.9 billion and 56 cents.

After an initial pop, the stock has settled back in very near where it was prior to the pre-announcement. MU’s underperformance to the SMH (the etf that tracks the sector is making new multi-year lows daily: 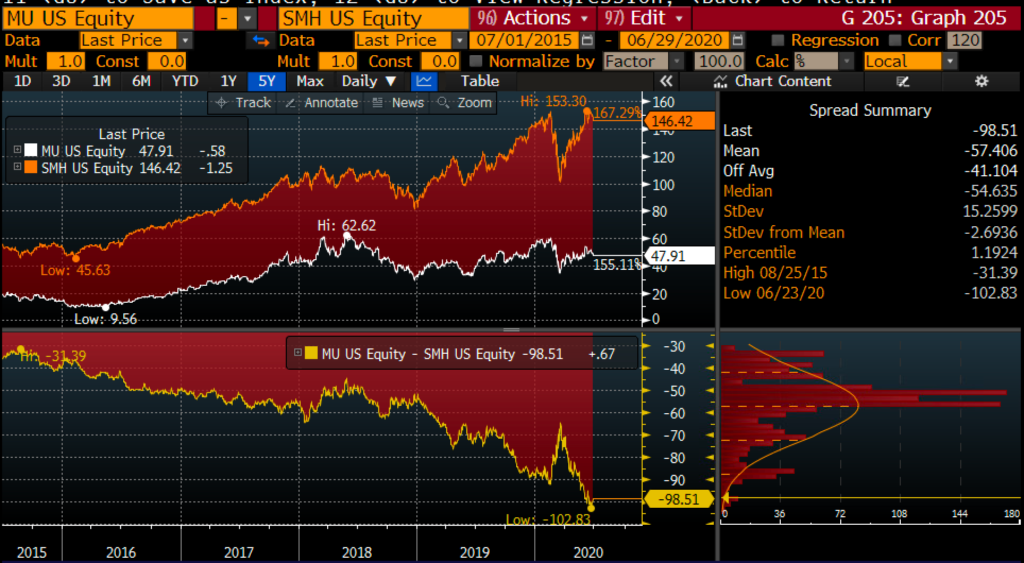 Why the underperformance? Recently MU CEO stated (per Barron’s)

“We are cautiously optimistic about sustaining our current business performance in fiscal fourth quarter as well,” Mehrotra said at the virtual conference. Micron didn’t offer anything more concrete, meaning investors should keep a lookout Monday for commentary and guidance about the next quarter, especially in terms of what the company is saying about the coronavirus.

Wall Street is confident that Micron will even beat the guidance it issued roughly a month ago, according to analysts polled by FactSet. Currently, analysts model earnings of 75 cents a share on sales of $5.2 billion. That represents a modest dip from the year-ago period, when Micron booked earnings of $1.05 a share and sales of $5.27 billion.

Despite Micron’s predictions and Wall Street’s own loft expectations, it’s worth recalling that BMO Capital Markets analyst Ambrish Srivastava’s said June 23, that memory prices are going south and that’s going to hurt Micron over the next several quarters.

In the note, Srivastava said that his checks on the spot pricing for memory suggested that the drop his team saw is likely to extend beyond immediate demand, and soon will be reflected in longer-term contracts. Such price drops will last well beyond a single quarter and his analysis indicates softness in memory prices could continue for as many as three quarters.

A very old friend and one of the sharpest tech minds on Wall Street, Rob Rupple, tech specialist at Credit Suisse cited the following investor concerns in a note to clients on Friday:

investor angst has increased of late with weaker spot pricing since March on concerns that 2h PC demand will be softer and on a 1H Hyperscale inventory build. Arguable both are true with declining ASPs reflected in FQ4/FQ1, but Pitzer continues to echo that memory cycles are driven by supply not demand and memory capex remains -30% (over the past 6 quarters) & our C’21 eps (street high) embeds ASPs only +6% y/y. While near term Hyperscaler growth remains a risk memory content for 5G handsets and the Memory/Logic ratio continues to increase, which is structurally bullish long term. Pitzer reiterates the OP and $90 TP with the stock at only 5.5x EV/EBITDA (below its 4yr average). Seems like the weak Hyperscaler rhetoric has been largely articulated and understood by investors at this point.

My Take into the print: I’d be shocked if MU were able to guide for the current quarter that would instill a great deal of confidence that the cycle was about to accelerate. Could the stock have a 10% short squeeze if the quarter was inline and the guidance a little better than expected, but I don’t think we are in that sort of market heading into Q2 earnings season after such a sharp broad market rally over the last few months?

If I were inclined to play for a 10% rally, allowing for an overshoot to the upside I might consider a call butterfly in July expiration, for instance:

The trade idea targets the high the stock made in June as the best-case scenario, the low in made in May and not moving higher above current levels as the worst-case scenarios, but again, only risking less than 2% of the stock price for the next 2 and half weeks.

If I were inclined to express a near-term bearish view I might target the mid to low $40s where the stock found support in early May:

Rationale: this trade idea risks 3.5% of the stock price and has a break-even down 6.5% and has a max profit potential of 11% if the stock is down 17.5% in the next two and a half weeks