Nike (NKE) will report its fiscal Q4 earnings today after the close. The options market is implying about a 5.5% one day move tomorrow in either direction, which is rich to its 3.75% average move over the last four quarters.

Despite NKE’s 43% peak to trough decline from its all-time highs in January to its two-year lows in late March, the stock has come roaring back to be down only 1% on the year, and about 6% from that prior high: 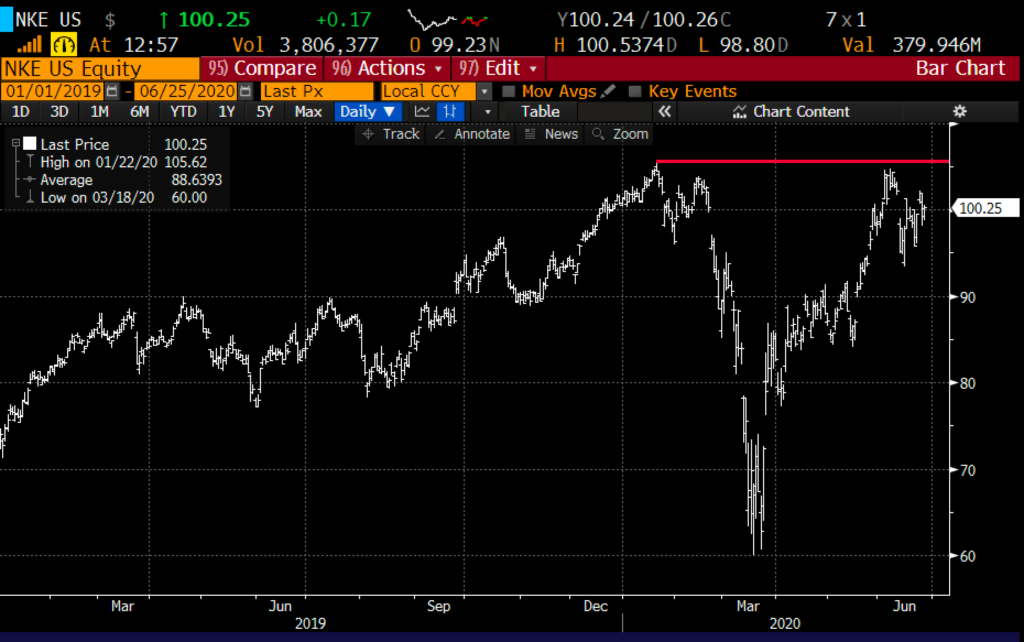 It is worth noting that NKE’s Q3 report came the day after the stock market bottomed. While it might be easy to assume that the stock turned with the market, their commentary at the time about what they were seeing after nearly three months of large parts of China being locked down due to the coronavirus offered some clarity on how markets like North America and Europe might come back in the months to come.

Why is China important? well, it makes up about 15% of its total sales and its largest geographic growth opportunity. Aside from coronavirus demand concerns, there are obvious supply chain issues and of course the ongoing tense relationship between the U.S. and China on the trade front and our admin’s blame for the virus, and increasing calls by our legislators to sanction the county for human rights abuses. These tensions are worth noting as a further cooling of relations could clearly lead to some form of nationalism as it relates to consumer purchasing trends.

While there is little doubt in the premium nature of NKE’s products and brand, its premium valuation is getting a tad stretched, especially when you consider we are in the throws of the deepest recession our country has suffered in nearly a century. Despite only a low single-digit year over year decline in sales in the fiscal year just ended, EPS is expected to be down nearly 10%, causing NKE’s P/E to surge to its highest point on record. Current expectations are calling for a massive eps ramp in the coming 12-months, which seems less than certain and on a calendar basis, the consensus is calling for a 47% yoy eps bump in 2021. 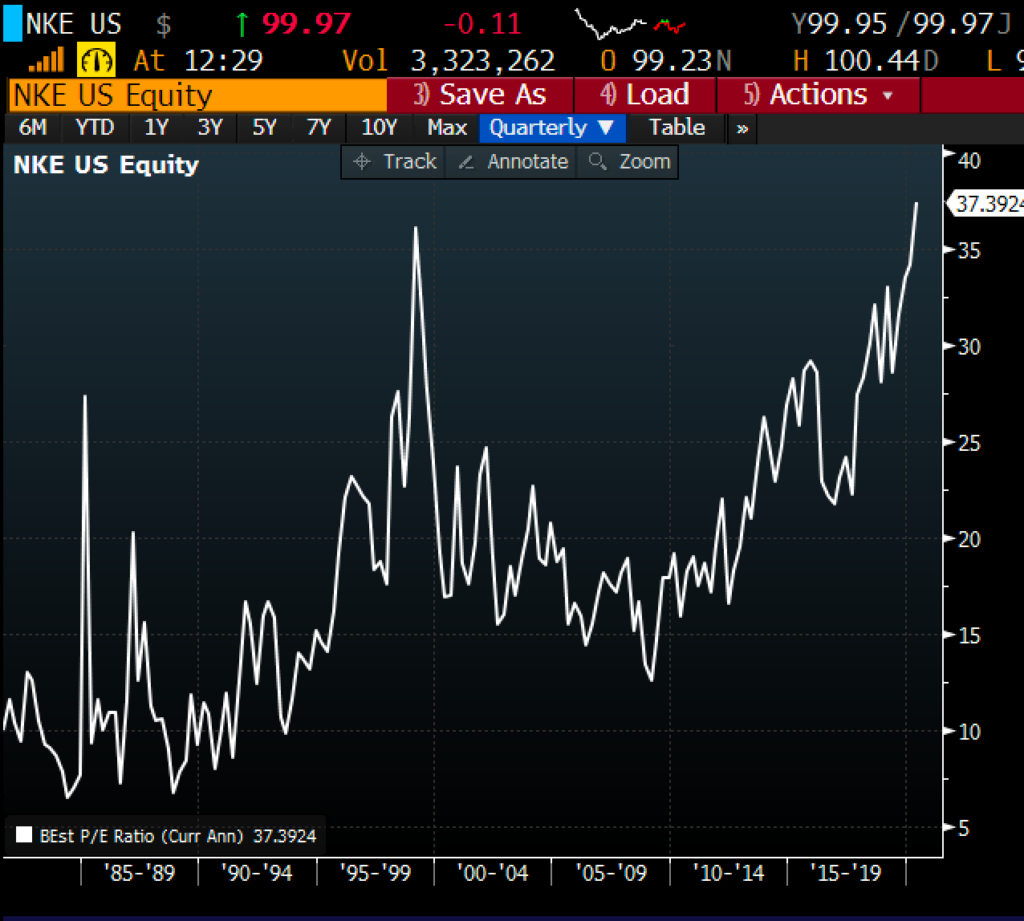 So whats’s the trade? The stock is priced for perfection and clearly anticipates the worst of the global recession is behind them. That is certainly possible but any benefits that the company had in the U.S. from citizens being stuck at home with cash coming in from the government in many cases more than what they would have been making if working is likely to abate in the coming weeks. I suspect that forward guidance will be nothing short of cautious.

If I were long the stock I might consider stock replacement, selling my stock and swapping into a call spread to better define my risk into the fall, or possibly a collar to offer further participation to the upside, to a point, but also defined risk to the downside…

Rationale: this is not exactly a fantastic risk-reward with a break-even on up 8%, but that is a few percent above the one day implied move for just tomorrow and offers nearly 12% profit of the stock over the next nearly 2 months if the stock were up 20%. Max risk is a little more than 3% of the stock price.

Or if you are long and more worried about extreme downside in the near term as opposed to extreme upside, consider collaring your stock, for instance:

Rationale: for 1% of the stock price this hedge allows for 14% gains in the coming months but offers protection down 10%.

Lastly for those looking to express a defined risk directional view into the print, remember doing so in weeklies is very binary. The implied move is about $5.50, so that means to buy the at the money 100 call or put in June 27th expiration with the stock at $100 would cost half that, or $2.75. Lets say that you thought the company would issue a beat and raise and the stock would breakout to a new high above $105, then risking 2.75% makes sense, but if you get the direction wrong it is likely to be worth pennies by lunchtime tomorrow if you get the direction right, but the magnitude of the move wrong, then also worth pennies by your afternoon coffee, and if you get the timing wrong, meaning that the stock is above your break-even at $102.75 on Monday then you just feel silly. There is my usual PSA for buying short-dated options to express directional views into events like earnings.