Today after the close Oracle (ORCL) will report its fiscal Q4 results. The options market is implying about a 6% one day move tomorrow which is above its 10-year average of about 5%, but well below last quarter’s 20% rally on March 13th which came after the stock’s nearly 30% decline in the preceding month.

Shares of ORCL are up ~3% on the year, and today’s gap places the stock above key resistance at its downtrend from its all-time highs made last summer, and above its 200-day moving average. A clear upside target would be the prior high just above $60: 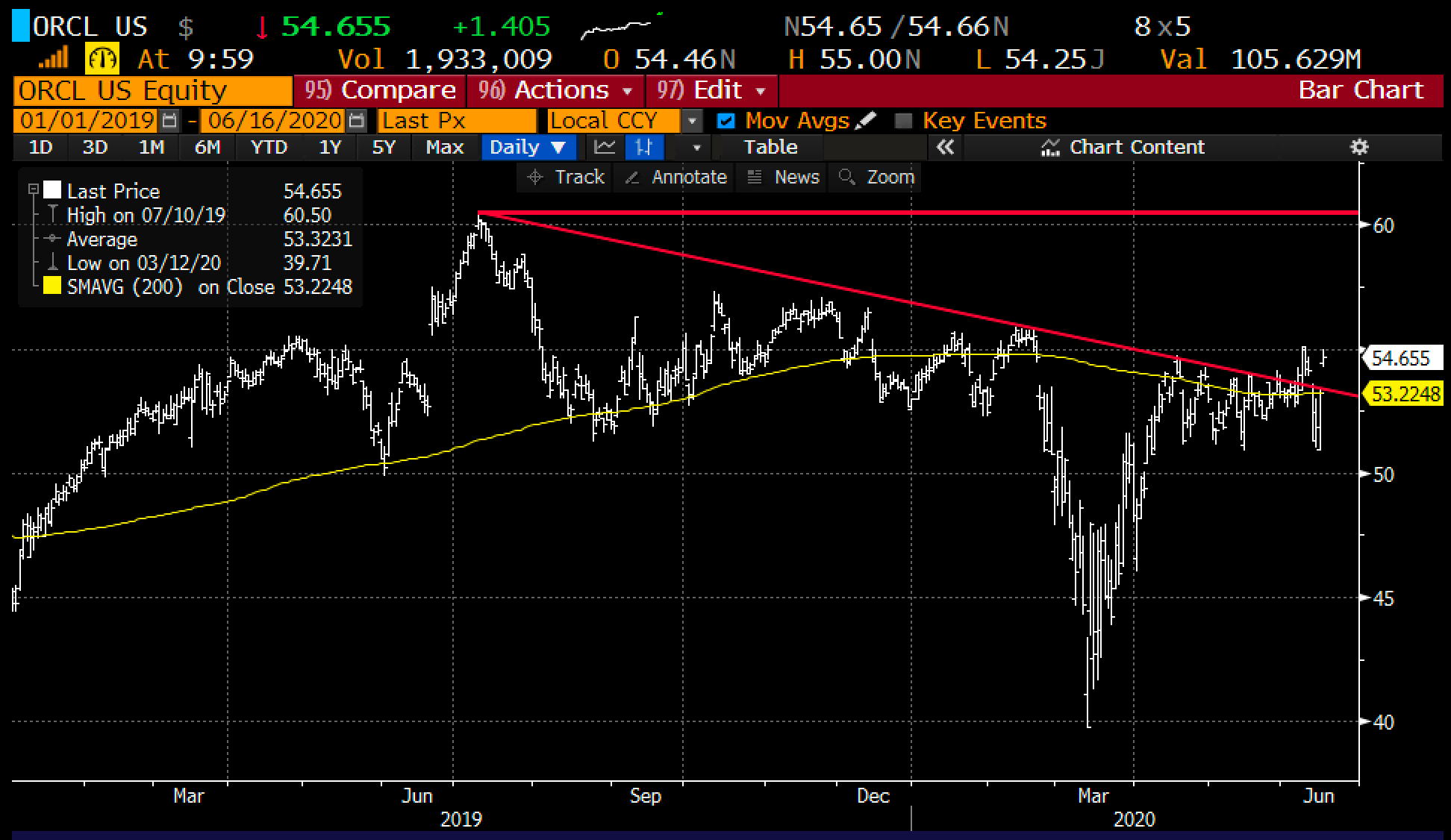 ORCL is a pretty unique stock in this market where the Nasdaq has massively outperformed the broad market, up 11% on the year compared to the SPX’s 2.5% decline, dragged up by MAGA and SaaS names, while ORCL has sat out, despite trading well below a market multiple and almost all of its peers. For the most part, Wall Street analysts are lukewarm on the stock with only 9 Buy ratings, 20 Holds and 3 Sells.

Credit Suisse’s software analyst who I regard as one of the best, Brad Zelnick, who has also had a great call of late on software cos into their earnings, rates the stock a Buy with a $57 twelve-month price target suggests in a recent note to clients:

while Oracle is facing the same macro pressures as others in Software, F4Q results should be better than investor fears of a 30%+ y/y license decline similar to SAP’s March quarter. At a high level, we see solid renewal rates, better-than-feared new business, and a reinvigorated channel, offset by more-than-typical deal slippage into F1Q21.

Zelnick highlights these two points as leading a list of positives in the current period:

(1) Uptick in renewal rates, even among clients that have plans to reduce ORCL footprints. On-prem renewals benefit from higher annual pricing uplift (~5% list) while cloud renewal rates continue to improve, in line with customer usage;

(2) New business growth bounced back in May after materially slowing in late Mar/Apr, likely resulting in license growth below consensus -12% y/y, though better than the -30% or worse
downside cases we hear from investors

While citing the following concerns:

(1) Some larger deals (with significant $ values) slipped, only closing partially in the quarter, with extended price holds offered for as long as 180 days;

(2) While there were some nice App wins in F4Q, many deals pushed, though we estimate apps represent only 10-15% of total license now, given the mix shift to SaaS;

(3) While we are hearing of possible restructuring post FYE, we believe this to largely be normal course of business

If tech is going to continue to lead the market higher I would expect the rally in the group to broaden out a bit, away from MSFT, AAPL, GOOGL & AMZN… ORCL is banging up against an interesting technical level, the well-defined downtrend from its all-time highs last summer, with a target back to the highs at $60. here are my notes from yesterday:

Rationale: this trade idea risks less than 3% of the stock price, has a potential payout of 3x the premium at risk if the stock is back up at the prior highs in a little more than a month, which should include a catalyst of earnings in the third week of June.

I don’t feel too different now with the stock very near those levels a month ago. Does the lack of participation with most of its peers bother me a little? no doubt about it…

The call spread that I detailed on May 13th when the stock was $5325 is now worth about $1 with the stock at $54.25, which is a good illustration of how options premium can erode over time with little movement in the underlying when expressing directional views via long premium strategies like calls or call spreads in this situation.

What’s interesting and I guess most important now to evaluate with this position is that holding this trade into the print tonight is quite binary because it expires on Friday’s close. If the stock were to rise just a little, but not to this trade idea $56.25 break-even, or not move at all, or decline, then the likelihood of this trade expiring worthless in three trading days is very HIGH.

If I was very convicted on a move back to $60 post-earnings this week, coming to this idea today, then risking $1 for a $56 breakeven and up to $4 in gains between $56 and $60 seems entirely reasonable but to make max profit you need about a 10% rally by Friday’s close.

Alternatively, the July 55 – 62.50 call spread offered at $1.75 could make sense, allowing for another month to realize a re-test of the prior high, while allow some more room overhead in the event of a breakout. This trade idea risks 3.2% of the stock price with the potential of 10% gains of the stock price, or $5,75 if the stock is at or above $62.50 in a month, which the options market places about a 10% probability.

Or If I were inclined to make a bearish bet it would be for an immediate reaction to the results and guidance and I would consider paying ~$1 (vs stock at $54.35) for the June 54 – 50 put spread, breaks even at $53 with gains u to $3 between $53 and $50 with a max gain below $50. Again very binary, get the direction wrong and this trade losses 3/4s of its value tomorrow.