ICYMI: There is some pretty weird shit going down in the stock market as the Nasdaq makes new all-time highs, closing up 10% on the year yesterday, while the S&P 500’s close yesterday places it back at even, down about 5% from its all-time highs made in February.

The Nasdaq Composite stock index is trading at new highs, the latest sign of the resilience of the big technology companies that have powered the stock market over the past decade. 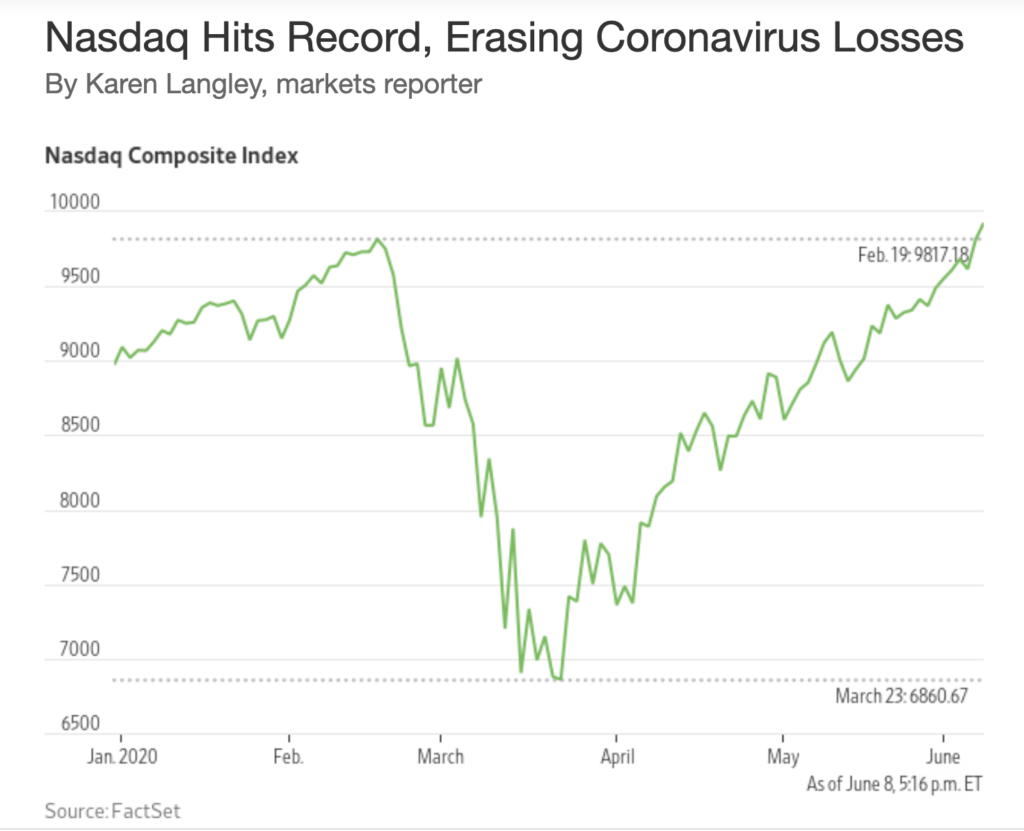 A clear V in the stock market, which David Blaine, I mean Rosenberg highlighted on Twitter yesterday:

It’s the mother of all “money illusion” rallies. In 3 months, the Fed juiced up M2 by a cool $2.5T, and the S&P 500 mkt cap surged dollar for dollar. Who needs earnings? Who needs productivity? Who even needs buybacks anymore? MMT arrived early and with a Republican in office!!

This should be obvious to all by now, Don’t Fight the Fed, which Bloomberg’s John Authers expands on Rosie’s point above: Crash Lesson No. 1? Don’t Ignore the Fed’s Gusher 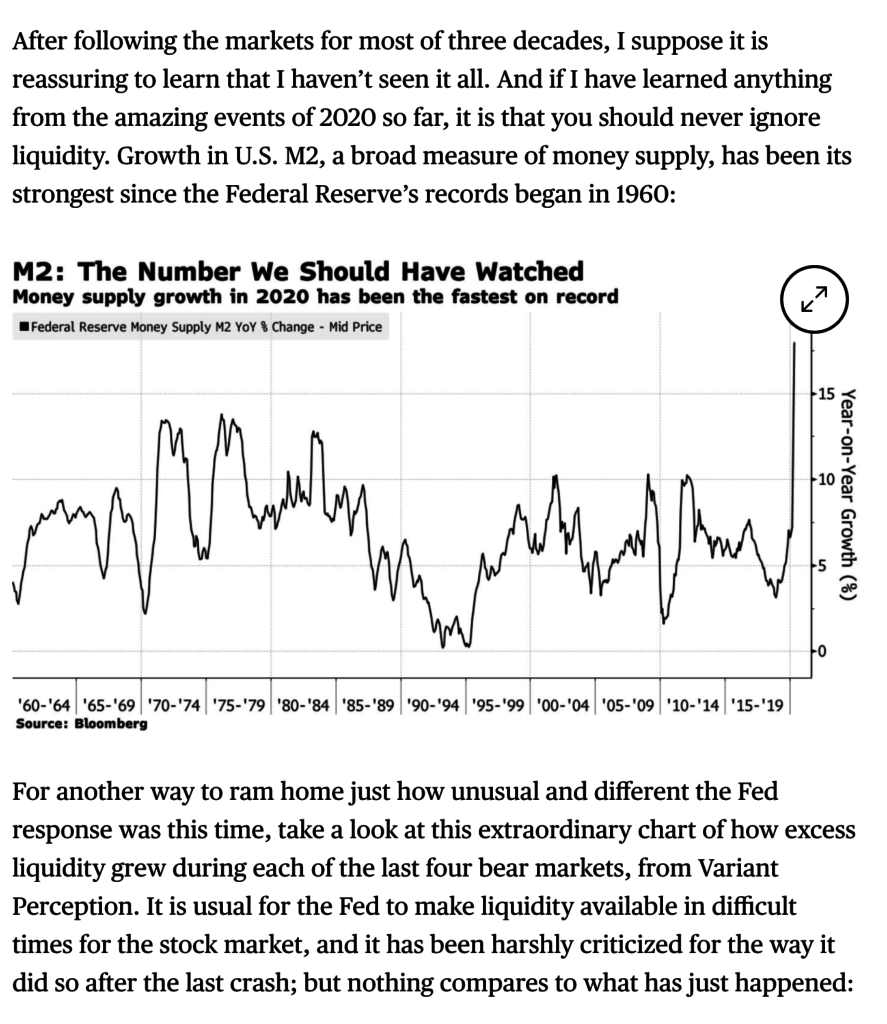 The combination of Nasdaq Gains on the year, SPX within earshot of its highs, and the clear mania by the masses should be making investors a tad worried given the headwinds that still exist related to the coronavirus and its economic aftermath

Speculative excess has surged to the highest in at least 20 years among U.S. options traders — and that’s a negative for stocks over the medium term, according to Sundial Capital Research Inc.

Traders established fresh bullish positions last week by buying 35.6 million new call options on equities, according to Sundial founder Jason Goepfert. That’s up from a peak of 28.7 million in February, when speculative activity was rampant, he wrote in a note Monday. 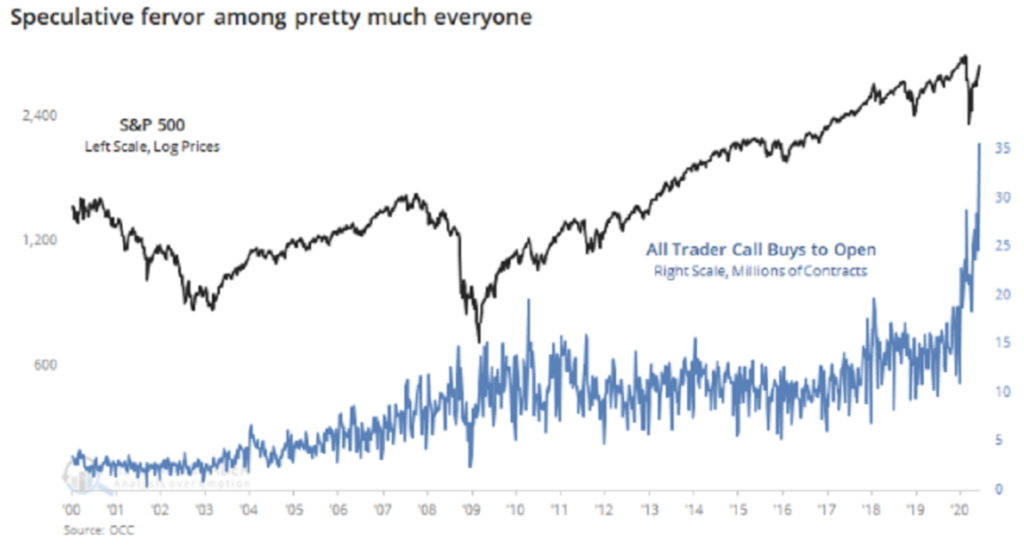 Here is another way to consider what the options market might be telling us about the speculative nature of recent stock market gains:

Put Call Ratio – the rule is sell or short when the ratio is going up. Generally you don’t short until it goes over .60, but being that this is an exceptional market, maybe an exception this time 🙂 Look for the truth comes out with the talking heads on the Financial News 🙂 pic.twitter.com/nGFmji8LOV 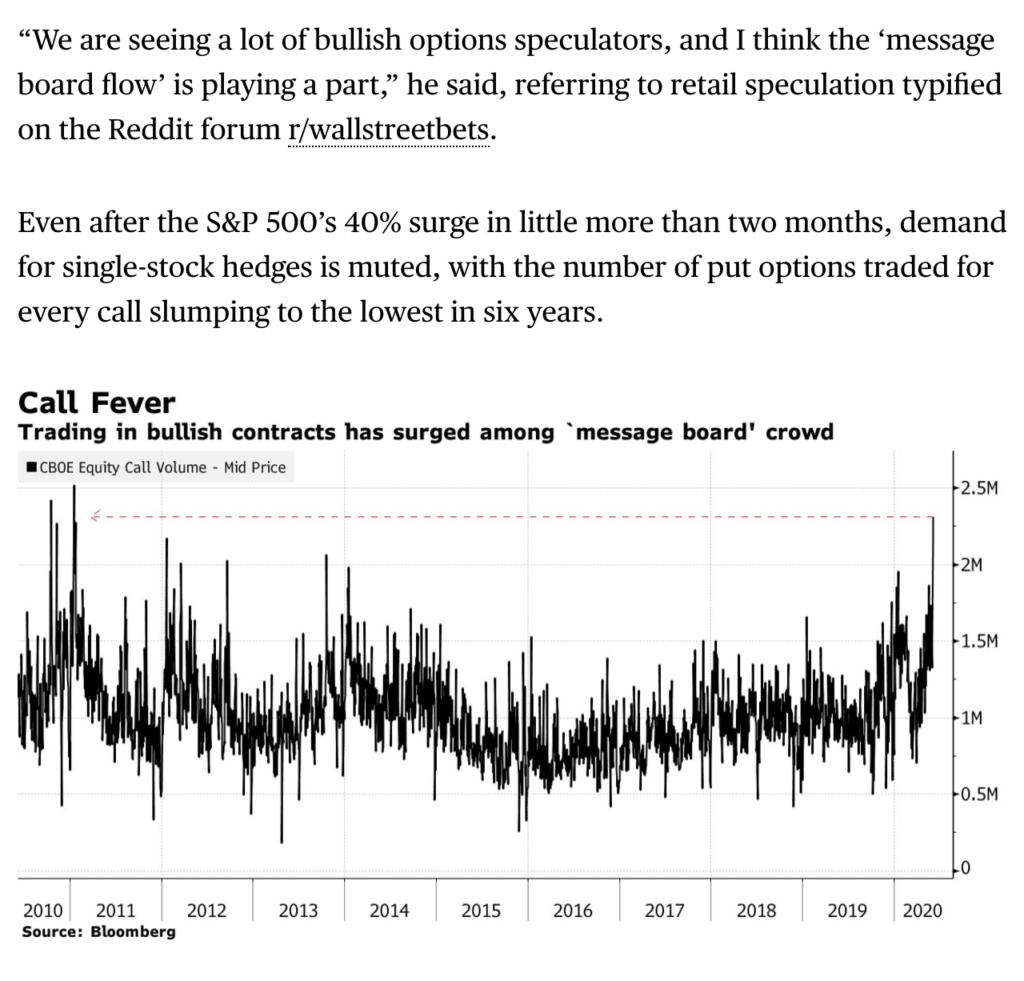 And they are doing some really dumb shit that would only make sense in a stock market mania: 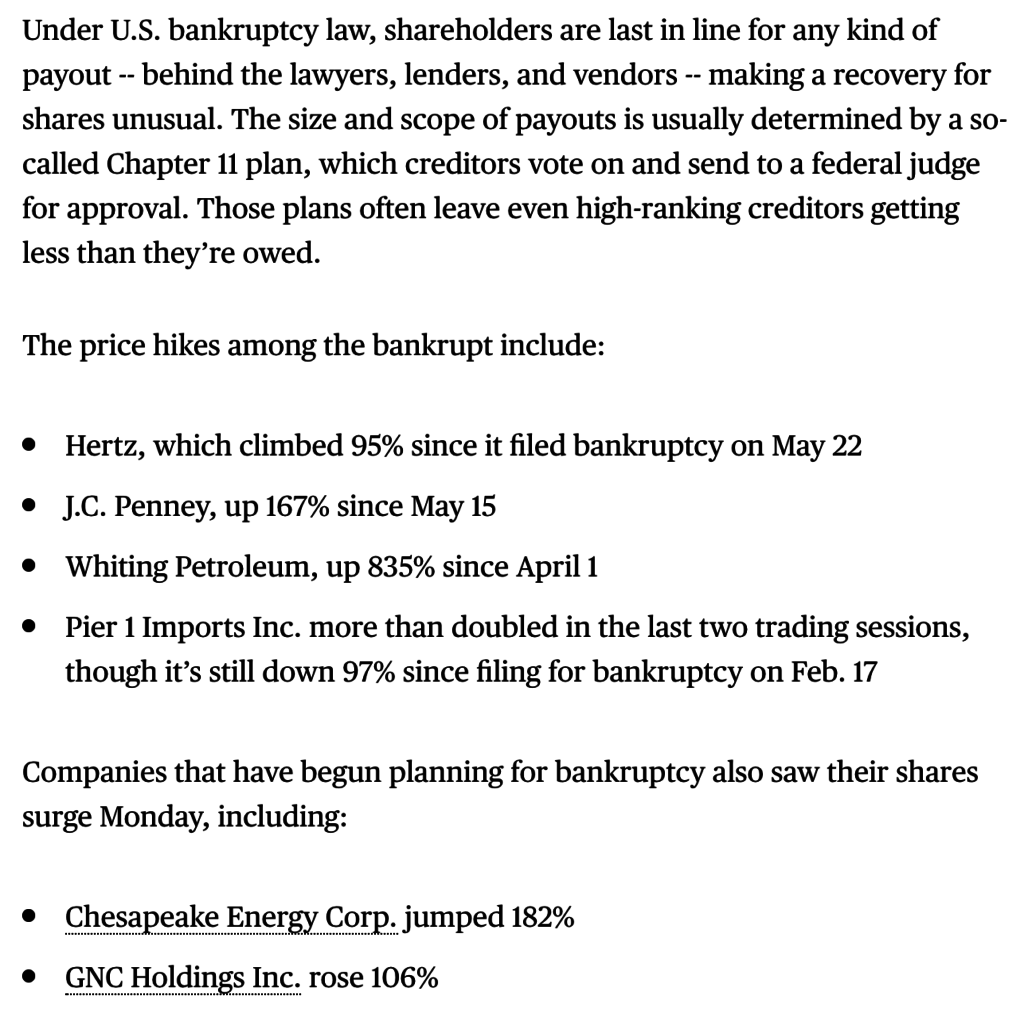 I love this tweet from Jim Cramer this morning, I feel like he wrote it in 1999 to describe the speculative stock market price action then: 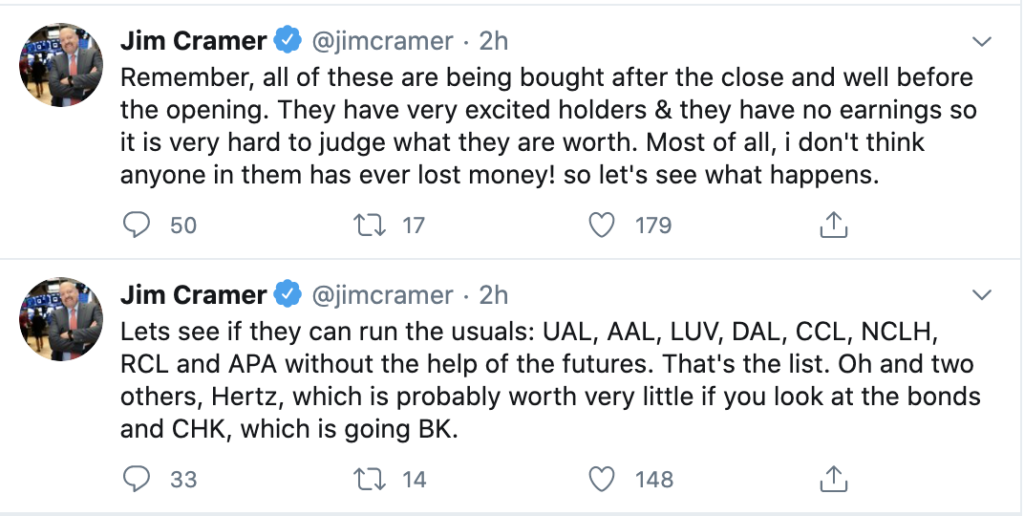 And lastly, probably the weirdest shit, I suspect Davy Day Trader enjoying himself without sports to talk about and bet on, and I can see  why his fans think it is pure entertainment, but does not bode that well for market sentiment after everything we have been through this year, highlighted by Jim Bianco:

“Buffett is an idiot”

“All I do is make money, this game is fucking easy. Literally the easiest game I’ve ever played. All I do is print money.”

“I should be up a billion dollars.” https://t.co/8YdlstcRQP 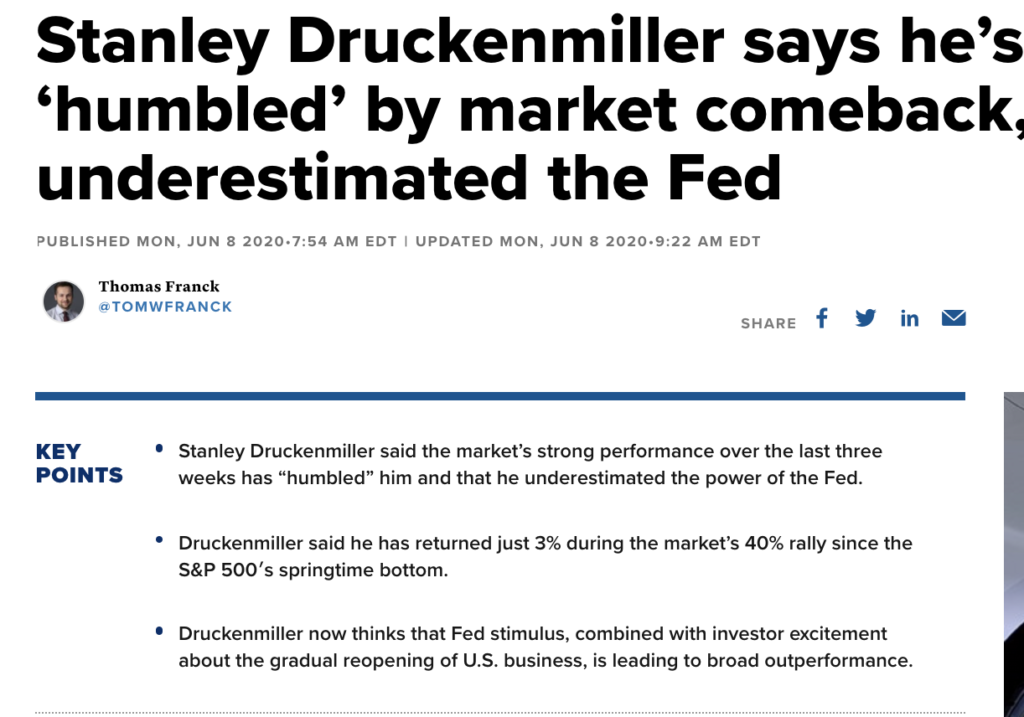 As I write the S&P 500 futures are down 90 bps, feels like a glitch in The Matrix or something… a distant deja vu, I suspect they will be green by noon.

But for those of you who are interested in getting a sense of what the options market is pricing for movement over the next month, with a SPY close of $323 last night the July 10th one month out straddle (the call premium + the put premium) is offered at about $16, implying about 5% movement in either direction between now and the close on July 10th. If you are inclined to express a defined risk directional move, possibly for a rally to new highs, or a breakdown (hedge) at the February gap level (technical resistance) then buying just the at the money put or call you would be risking about 2,5% of the price of the SPY over the next month.