Twice in April when shares of Slack (WORK) were trading in the mid $20s I detailed bullish trade ideas on the stock, targeting a breakout in the summer above $30 (here and here). The premise was a fairly obvious one given the lockdowns and the new reality for so many workers and their need for seamless connectivity to their teams. On April 6th, when the stock was $25, on the day the company priced a convert that was upsized from $600 million to  $800 million, I had the following to say:

Today WORK announced that they were raising capital via a convertible bond to the tune of $600 million which will bolster the existing $768 million in cash, or about $542 million net of their existing debt. For a company that is NOT profitable (lost $113 million in adjusted net income in FY2020 on $630 million in sales), with sales growth expected to be mid to low 30s% for the next few years and trades at 16.4x expected FY2021 sales, I’d say a cash cushion on their balance sheet makes a lot of sense given the stock is where it was when they “took the company public”. The idea of issuing a convert now at nearly the same price the stock was last year makes sense because they are raising cash but avoiding the dilution of raising via issuing new equity and the play is that interest expense on the debt now is tax-deductible and as the company become profitable, the stock should also rise, and the dilution on the conversion will have far less of an impact on a higher-priced stock of a profitable company.

All that said, If I were Alphabet (GOOGL), sitting on $120 billion in cash, relatively unhappy with GSuite and their collaborative work tools, always trying to keep up with Microsoft (MSFT) Office & Teams, I would simply make a $25 billion knockout bid for WORK and make their CEO Stuart Butterfield the head of productive and collaboration tools. To be fair there are no shortage of companies that should buy WORK, MSFT, ORCL, ADBE, CRM and even FB.

On Friday, following the company’s fiscal Q1 the stock sold off 14% on a better than expected Q1 that saw revenue grow 50% year over year, with gross margins of 87% while adding 12,000 new paid users, 7,000 more than in Q4. Investors were clearly disappointed in the Q2 guidance that came in slightly below consensus and by the fact the company pulled their “calculated billings guidance” for FY 2021. CEO and Founder Stewart Butterfield addressed all of these concerns in an interview Friday morning with Andrew Ross Sorkin on CNBC, suggesting they are clearly benefiting from tailwinds as a result of the move to remote work which has been accelerated by the pandemic, but also the headwinds to their customer’s businesses are not yet knowable

My take on Thursday after the close during Fast Money was that compared to Zoom (ZM) investors were clearly expecting more upside, but the stock’s weakness had more to do with its runup in the week prior as opposed to the results:

As far as that price action Friday, it merely reversed the run-up it had the prior week in sympathy with Zoom. The stock is now back just above prior technical resistance which now support down at $30. 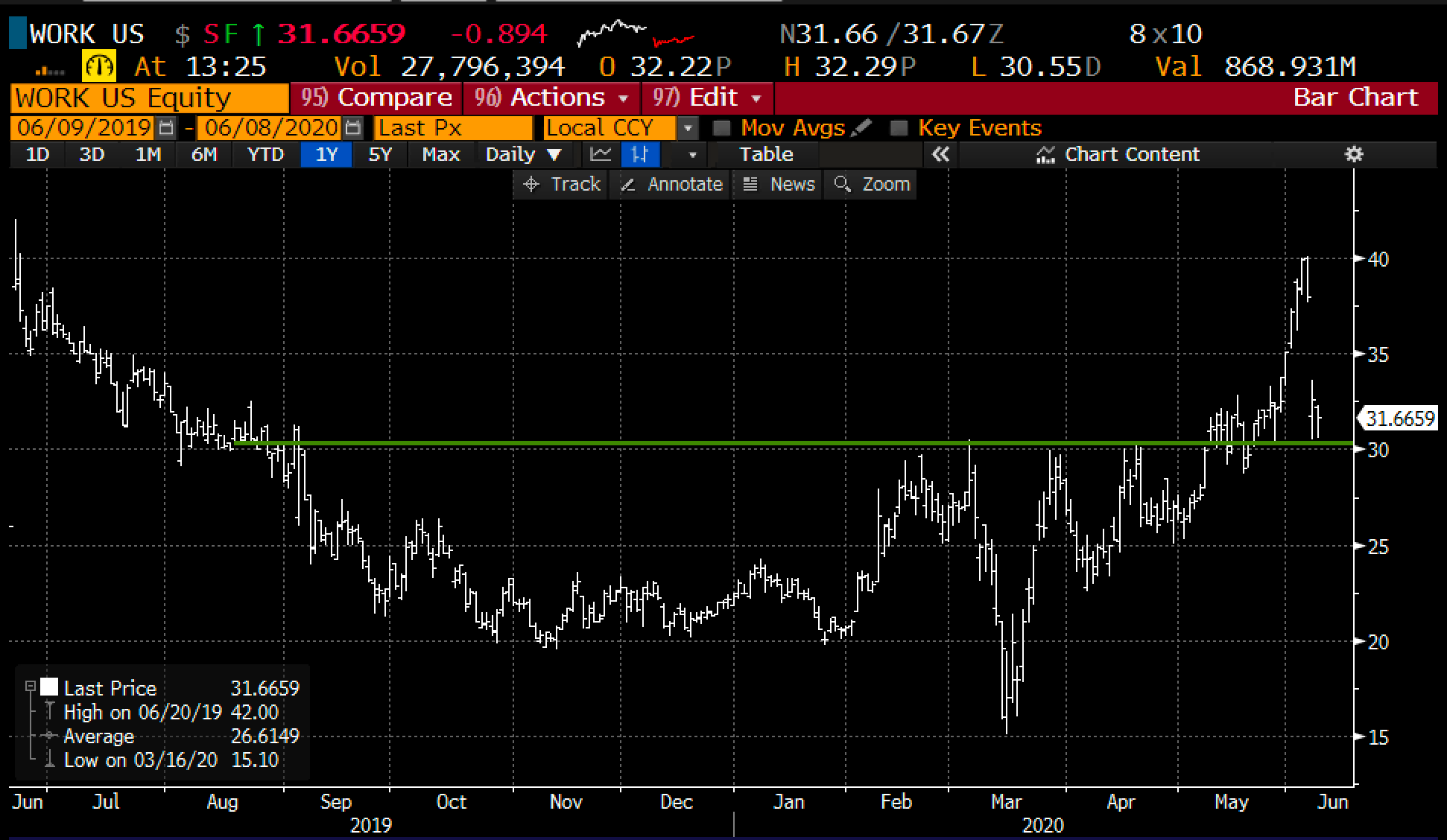 For those who agree that this stock will work its way back towards its prior highs near $40 over the course of the summer, especially if we were to see a second wave of virus infections causing employers to push out the return of employees to offices or enforce shits, then consider getting long using $30 as a near-term stop.

One way to do that with defined risk would be to consider a call spread, for instance…

Or for those who think the company will clearly be a takeout candidate if there was another coronavirus wave then consider risk reversals (more risk, but greater potential reward), selling a downside put to finance the purchase of an upside call or call spread, for instance: