On May 1st in this column I wrote (May She Will Stay):

In Q1 of this year, the mouthpiece of our Federal government was in total denial, at least to its citizenry that our country would be faced with one of the most severe health and economic challenges of the last century… in the days/weeks to come. With the testing of less than 2% of our population for the virus, we have nearly one-third of the confirmed 3.3 million cases globally and 60,000 Americans have died in the last two months from the Virus (yet less than 4% of the world’s population). The efforts to contain and mitigate the spread have caused the forced closure of our economy and way of life with 30 million Americans filing for unemployment benefits in the last month while Q1 GDP dropped 4.8%. For now the human toll in terms of those infected and deaths has not reached the administration’s worst-case given on March 31 (since downgraded), the week that many feel our elected leaders in Washington finally got serious about the contagion after waffling on tactics to mitigate the spread for weeks in March.

April come she will… well as confirmed cases and deaths spiked, so did the S&P 500 (SPX) registering its biggest monthly gain in 33 years, up 12.7% in April, placing the index down 14% from its all-time highs in February and down just 10% on the year. Mission Accomplished!

As we head into the last month of the second quarter it is worth updating some of these stats. Per the CDC, we have tested only 5% of our population for coronavirus (17 million people), we have about 1.8 million cases nationally (which is 29% of the world’s total) and are nearing 105,000 deaths (about 28% of the world’s total).

U.S. Q1 GDP was revised lower last week to a negative 5%, and as of now the Atlanta Fed’s GDPNow tracking model projects -51% for Q2:

On May 29, the #GDPNow model nowcast of real GDP growth in Q22020 is -51.2%. https://t.co/T7FoDdgYos #ATLFedResearch On June 5 we will stop supporting the GDPNow app. Download our EconomyNow app to continue to get the latest GDP nowcast and more. https://t.co/NOSwMl7Jms pic.twitter.com/RjYJu40w8d

So if you are looking for a V-shaped recovery in the economy, optically in Q3 you will see a massive one after the disgusting Q2 print: 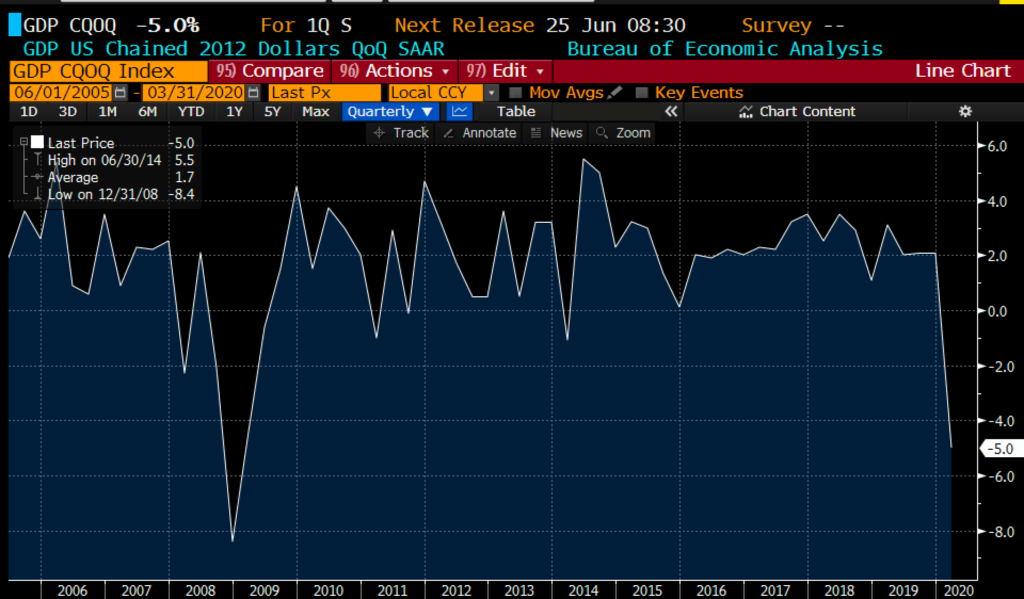 But that will not signal the all-clear for the economy because as of a month ago when we had cumulatively 30 million people filing for unemployment benefits in March and April, we added another 10 million. in the last month. The unemployment rate in America which was at 60 years low at 3.5% in February was nearly 15% last month and is expected to near 20% when the May print comes later this week, with many economists suggesting the rate could get to 30% before we see a meaningful decline:

If you have the time take a listen to Barry Ritholtz’s Bloomberg podcast with economist David Rosenberg. I have not heard “Rosie” in a while in long-form, and while I am the farthest thing from an economist, I agree with so much of his commentary about the fragile state of the global economy prior to the pandemic, that despite the stock market’s 30% rally in 2019 (aided by the Fed’s re-expansion of their balance sheet and “mid-cycle” adjustment in rates), it was already in an earnings recession, and while the debt bubble this time was not centered in the banking industry, they did benefit from it helping corporate America splurge on debt which was not used for cap-ex (also in a recession in 2019) but for stock buybacks helping to push valuations to decades highs, making the stock and credit markets very susceptible to shocks.

He was a little wishy-washy on the stock market from here, he says it is all about the timing of a vaccine. He made the point that I have made on a few occasions of late, that the gains on the days of the “vaccine hopium” have powered this last leg of the rally pushing the S&P 500 (SPX) above important technical resistance at 3000, but the likelihood of a vaccine in mass quantities before next spring is very low. But he says the vaccine is everything, and the stock market clearly pricing one sooner than later… sadly, I have to take the over if the SPX is pricing Jan to have mass quantities. Personally I am hoping like everyone it is sooner than later, but late 2020 or Q1 2021 does not seem realistic. 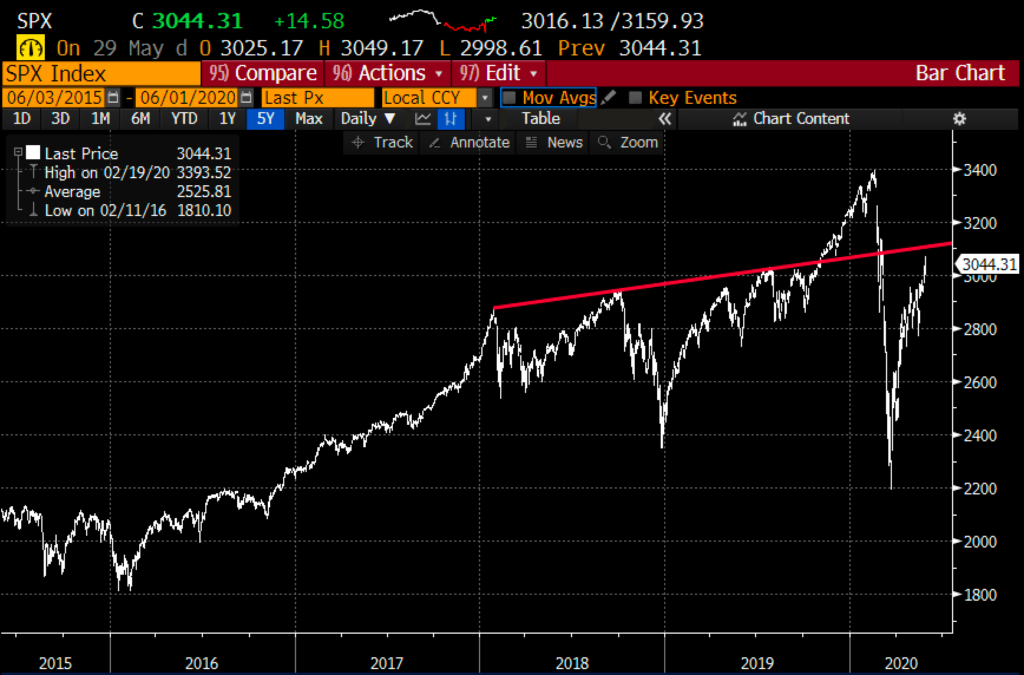 I suspect the realization in the coming months that while the unemployment rate will moderate into the fall, many of the jobs that come back will be as Rosie calls them the “low-skilled, low-value” jobs that were added in late in the cycle in 2018-2019 in “consumer cyclical industries” and quickly furloughed in the quarantine. Many of those jobs will not come back the same way they were and it is my view that this summer and fall will bring lay-offs in higher-skilled, higher-value jobs that will likely hinder a consumer-led recovery. The stock market is not pricing this, we have not stressed tested SPX earnings for 10% unemployment for all of 2021.

I am clearly out of the consensus for what this means for the stock market, and like most strategists/ pundits, I gravitate towards others who help reinforce my own views, while trying to understand what I feel is the consensus bullish view. This weekend the FT ran a story quoting Citibank’s co-head of investment banking, Citi warns markets are out of step with a grim reality:

The stock market is levitating on hope, that we get therapies and/or a vaccine that will allow us to get back to pre-pandemic activities. That the re-opening of the economy goes smoother and quicker than feels possible at the moment. That the recovery is aided by the front-end loaded nature of the monetary and fiscal stimulus. That with rates at zero for likely years, that there is no alternative to stocks. But this past weekend’s protests/riots/looting nearly ensure a push-out (for weeks, if not months) of a smooth reopening as major commerce hubs in our country, that are also some of the hardest hit by the virus and virus-induced recession will likely be under siege for the next few weeks, with quarantines and boarded up storefronts that were meant to open. As I have said routinely over the last couple of months, the stock market is the wrong lens to view progress on the health and economic crisis, it is clearly now the wrong lens to view what is a full-blown political crisis that will be around at least until January 20, 2021.

As for the market, will June change her tune? Your guess is as good as mine, but the stock market clearly does not reflect how most Americans are feeling right now and while we all want to latch on to something at the moment that gives us hope, the market feels as corrupted as so much else in our lives at the moment.