Dicks Sporting Goods (DKS) will report its fiscal Q1 results tomorrow before the open. The options market is implying about a $3.60 move tomorrow or about a 10% move in either direction, which is rich to its 8% average one-day move over the last four quarters.

Shares of DKS have been volatile in 2020 to say the least, at its lows in March the stock was down 73% from it’s multi-year highs made in early-January and has since gained 170%, despite still being down 26% on the year. 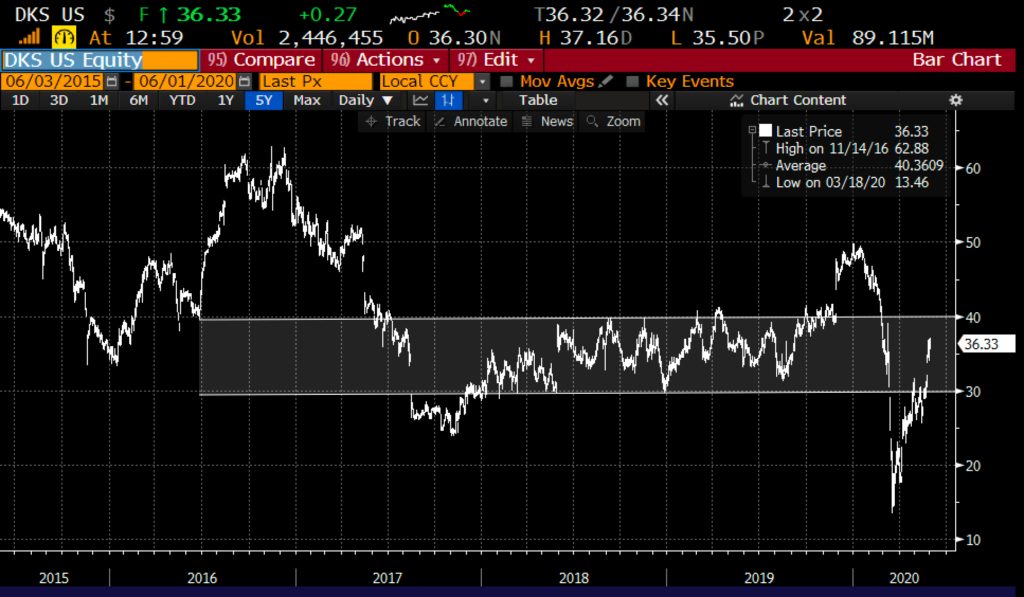 Given the store closures during the lockdown, the company’s earnings in Q1 are expected to swing from an 81 cent gain in Q4 to a 47 cent loss, down 176% YoY while sales are expected to drop 33% sequentially which was expected to be a low single-digit gain. Obviously the stock is going to look very expensive on this year’s earnings and sales and investors will likely have to look past what will be a lumpy reopening of their stores with higher expenses on a smaller revenue base and consumer who might not need sports equipment for some time given the lack of clarity on youth and school sports. If the company is able to guide for th balance of the year that gives investors confidence of their ability to get back close to fiscal 2020 eps and sales in fiscal 2022 then the stock at 11.5x and .37x expected eps & sales respectively looks fairly valued.

Wall Street analysts are cautious on the stock to say the least with just 8 Buy ratings, 15 Holds, and 1 Sell with an average 12-month price target of $33, nearly 10% below where the stock is trading. Traders are also a bit cautious with 23% of the float sold short.

If I were inclined to play for a greater than expected miss and guide down and thought the stock could decline 20% back towards $30 in the coming weeks I might consider a put spread:

Or If I were inclined to play for a continued short squeeze with results and guidance not as bad as expected and the stock to work it’s way back above $40 in the coming months as the economy reopens I might consider a call calendar, selling a near dated out of the money call and using the proceeds to help finance the purchase of a longer-dated out of the money call of the same expiration, for instance:

The ideal scenario is that DKS is near $40 on June 5th expiation, if below the short call will expire worthless and you will be left long the July 40 call for only $1.05 as opposed to the $1.65 it costs now. If the stock is at or above the 40 strike than the short call can be covered if you want to stay long the July 40 call. The idea of the trade idea is chip away at the longer-dated premium and set up for larger rally than the implied earnings move over the next few weeks. The max risk of this trade idea is the $1.05 in premium paid which would only occur on a near-term dramatic rally above the $40 strike or below current levels.