Despite being a shortened trading week, I am tired, ready for the weekend. The thing that I am here to do I don’t feel like doing… analyzing the stock market and its movements. Like most of you, I am sad for the families of the 100,000 Americans who were lost to the virus in just the last few months. As you are, I am sick of the lockdown, concerned about the impact on our collective psyches, worried about what the post-pandemic work environment means for my career and my ability to provide for my family, and sickened by the virus-induced recession’s disproportionate impact on the most vulnerable in our society (to name just a few immediate concerns).

Sadly it appears that the President of the United States shares none of these concerns if you were to look at his twitter feed and his actions of late. You might say to me, well just turn it off. My response is that I can’t for a whole host of reasons aside from the fact that I think he is a clear and present danger to the future of our country, but from the moment I wake up in the morning, I am reading the news on my phone, then watching CNBC pre-market, then staring at a Bloomberg screen all-day. His Hurricane of F@%king Lies is inescapable and sets a horrible tone for our country and its citizens every morning. His lies and divisive rhetoric are meant to divert and divide us, and he is winning at it. Sadly it will only get worse from here. The one thing that he had to run on for his re-election was the economy, and it is LOST, at least for the rest of the year. So he will resort to his worst instincts, and the worst instincts of a man who has no shame, near unlimited power (which you can thank Mitch McConnell for) and nothing left to lose to keep that power, is a very dangerous thing. His behavior is truly Un-American, and it will be his legacy and an eternal stain on our democracy.

I know there are many viewers of CNBC, readers of Risk Reversal, and my followers on Twitter who like me (or maybe merely tolerate me) for stocks/ markets who don’t care about my political views and strongly disagree with me. That is fine, unfollow me, mute or block me. Write into whoever you think my masters are about how offended you are about my political opinions, I can assure you that won’t change a thing.

So I am just gonna keep calling it the way I see it. And yes, politics is very relevant to our nation’s prosperity, to our physical health, to our national security and of course to our financial markets. trump said it himself on numerous occasions when the stock market was going up in 2017 and 2019 that it was his report card, and it has become clear that he likes to take credit when it is going up and ignore and distract from it going down. Well, he has yet to learn that the stock market is NOT the economy and the economy is the one thing that is likely to reverse the course of the recent stock market gains in the second half of this year. I say this with no excitement about a prolonged weak economy, it is just a logical reality that unemployment in this country will remain very high for a very long time and will be a weight around the economy’s neck for months, quarters, if not years.

With that, I point you to some commentary from Fast Money from mid-April with JPM’s Marko Kolanovic, which I disagreed with then, and his pivot today, which I agree with now:

The SPX +6% since April 15 when we had this discussion, curve flattened, healthcare system held, financial system backstopped, but stock market dislocated from our new economic reality.

And BTW, for those who think I have been short from the bottom, here I was on Fast Money, on the day of the bottom calling for a vicious rally, click below to watch: 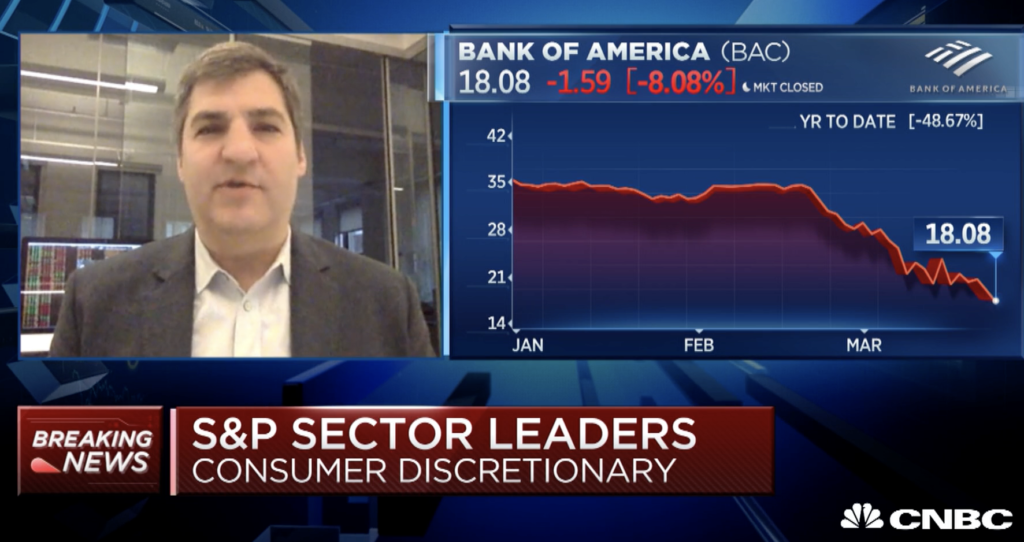 It has been my view that Vicious Rallies are Features, Not Bugs of Bear Markets, and that the economic recovery will be Very Different This Time and its about it’s Time to Prepare for the Worst and Hope for the Best.

So yeah I expected a 20-25% bear market rally from the lows, and we got a 35% one, which maybe has something to do with interest rates back at zero, trillions of fiscal and monetary assistance from the Treasury and the Fed that this Crisis is front end loaded and of course a total disregard for truth by the Financial Industrial Complex in our country.

And one last thing, if you are still here, with me, then can we just take a moment and give a little appreciation to Andrew Ross Sorkin, for saying the thing out loud that we all wish we had the cajones to do on live tv:

Andrew Sorkin has run out of fucks. pic.twitter.com/NBFNmqvTnx