Today after the close Salesforce.com (CRM) will report its fiscal Q1 results. The options market is implying almost a 4% one-day move in either direction tomorrow, which is rich its 3% average over the last four quarters,

Shares of CRM are up nearly 13% on the year, up nearly 60% from its March lows, and now only about 6% from its all-time highs made in late February. To my eye the stock has decent near-term technical support at its prior breakdown level near $169 and health technical resistance near its prior highs in the mid $190s: 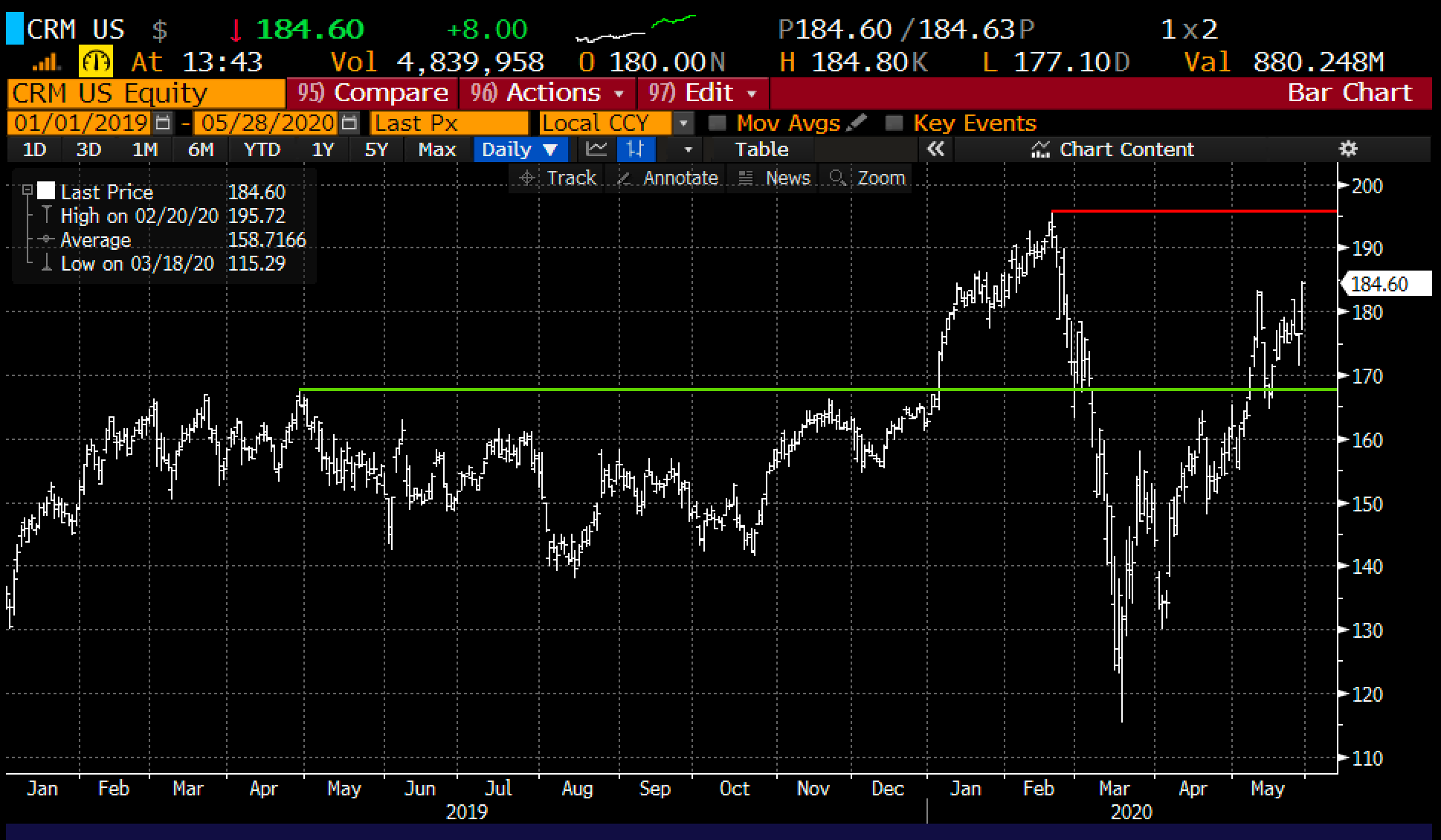 Wall Street analysts are overwhelmingly bullish on the stock with 38 Buy ratings, only 3 Holds and 1 Sell. That Sell rating came a couple of weeks ago from Rosenblatt Securities when the stock was $161.50 the analyst placed a $120 12-month price target on the stock, per Barron’s:

Salesforce, “currently enjoys a de facto enterprise standard status in the enterprise business application market.” That’s helped drive its 20%-plus annual revenue growth rate—impressive performance for a company that has been public since 2004. But Kim finds that “large scale business application deployment is becoming a lower priority among large organizations,” and predicts that “large deal activity [will] slow even after the IT spending rebounds.”

He thinks the company’s ability to churn out 20% growth year after year—and its target of $35 billion in revenue by fiscal year 2024—are in doubt. And if that happens, Salesforce shares will be hit with multiple compression.

“Our industry checks prior to Covid-19 in late January indicated that the pace of large-scale business application deployment, including Salesforce-driven initiatives, was likely to slow meaningfully this year,” he adds. “Hence, we believe that when the enterprise IT spending environment returns, the pace of large-scale business application deployments is likely to lag other initiatives with higher priority. Our most recent checks indicate that many of these Salesforce initiatives have been pushed out indefinitely or have been downsized significantly.”

Kim also thinks the recent departure of co-CEO Keith Block could trigger the departure of key sales executives, which “could impact its large deal execution.”

This is obviously a tough setup into the print for CRM, up like this on a competitor’s results the prior day.

It is also fairly notable that Credit Suisse’s software analyst Brad Zelnick who rates the stock a Buy with a 12-month price target of $200 struck a somewhat cautious tone into the print in a note to clients today: 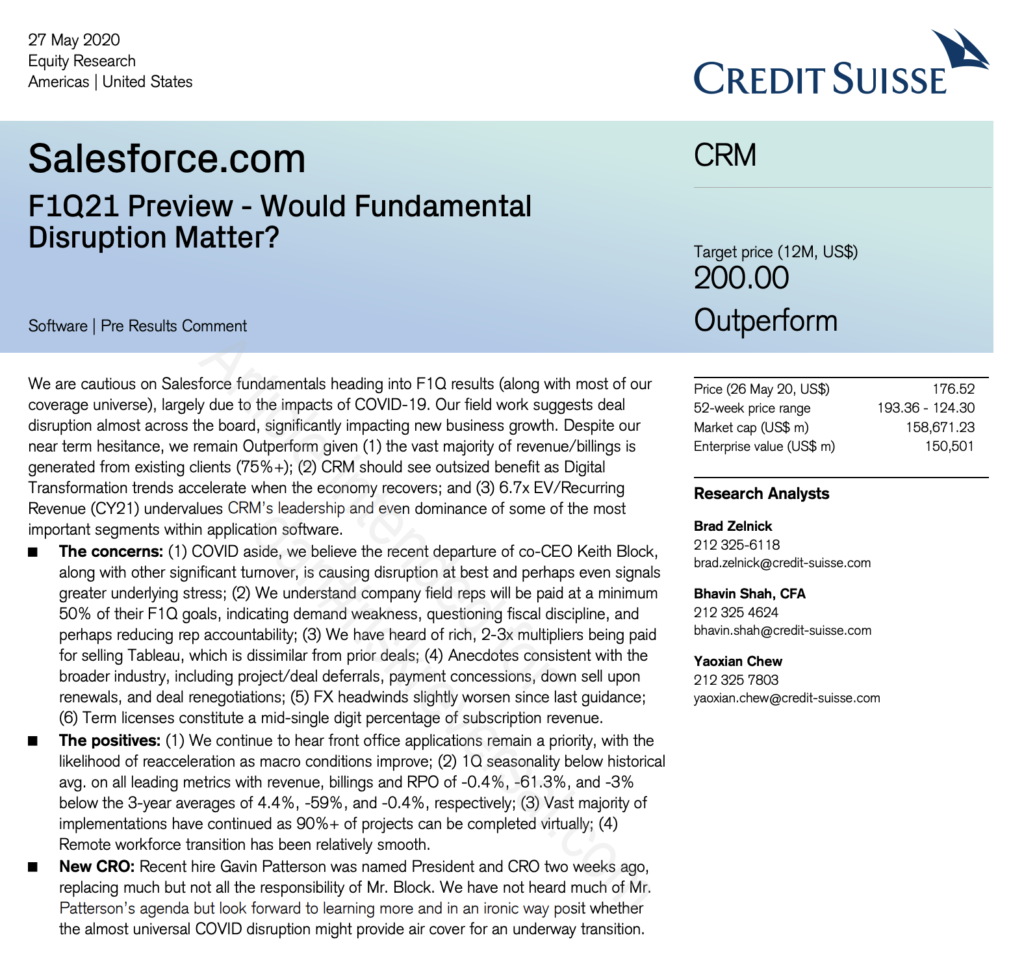 So what’s the trade? I am hard-pressed to see investors selling the stock meaningfully unless there is so very unexpected disruption in their business, which from their competitors there seems no reason to believe that for the time being.

Long holders might consider overwriting their long stock in an attempt to add yield… targeting the prior highs and selling calls that would be the equivalent of a Callaway level near the prior highs, for instance:

The investor can always buy to cover the short call if the stock is being threatened to be called away at or above 195 on June expiration if they want to keep the long stock position intact.

Or If you are long and are worried about a reversal in growth stocks and you fear that a hiccup in guidance in a stock like CRM could start an avalanche of selling in these sort of names then consider collars, selling an out of the money call to help finance the purchase of an out of the money put, thus allowing for gains in the stock to the short call strike, losses of the stock down to the long put strike, put protected below. For instance:

Rationale: an investor would only place a hedge on a stock they own like this if they are more concerned with extreme downside as opposed to extreme upside.  Just as in the case above in the overwrite, the investor can always buy to cover the short call if the stock is being threatened to be called away at or above 195 on June expiration if they want to keep the long stock position intact.

FOR those looking to place a defined risk one-day directional bet, with the stock near $185, the May 29th at the money put or call would cost about $3.50, or a little less than 2% of the stock price, or about half the implied move, if you were to buy either if convicted on a one day move tomorrow in one direction, you would need a rally of more than $3.50 or a decline of more than $3.50 by tomorrow’s close to make money.

Regular readers know that I am not a fan of making such binary short term bets into events like earnings, you need ot get a lot of things right to just break-even, first and foremost direction, but magnitude of the move and of course timing.