For the second week in a row, the trading week starts with a large gap higher out of the gate on optimism for global economies reopening and again news of a coronavirus vaccine entering a phase 1 trial down in Australia, with a first look on the data expected by the end of July, much like the Moderna (MRNA)news from last Monday. As Tom Lee of Fundstrat put it last night in a note to clients:

There are now 124 “shots at goal” for finding a vaccine for COVID-19, up from 118 a week ago. That is +6 additional candidates for a vaccine in just a week. This is quite a lot of progress and speaks to the enormous global resources, lab power, manpower and ingenuity behind developing a solution to COVID-19. While there is not a known probability of success, we can see measurable progress:

It is hard not to get excited about the reopenings going smoothly with the added tailwind of the prospect of a vaccine far sooner than sometime in 2021 or even 2022 as expected just a few months ago.

The stock market appears to be one of the few real-time indicators, a sort of sentiment scorecard for the effects of the coronavirus. In February when our markets were at all-time highs they were discounting the potential for meaningful health and economic impact. A month later in late March, they were pricing in hundreds of thousands of death and a very deep recession. For the better part of April and May, as the worst of the health crisis was better quantified with the curve flattened, the S&P 500 (SPX) found a trading range between support technical around 2750 and technical resistance at 2950 suggested, which that investors had found a sort of equilibrium on the health front.

With the futures indicated up 1.9% this am, it would appear the SPX will be above its 200-day moving average for the first time since March 6th and threatening the October breakout level: 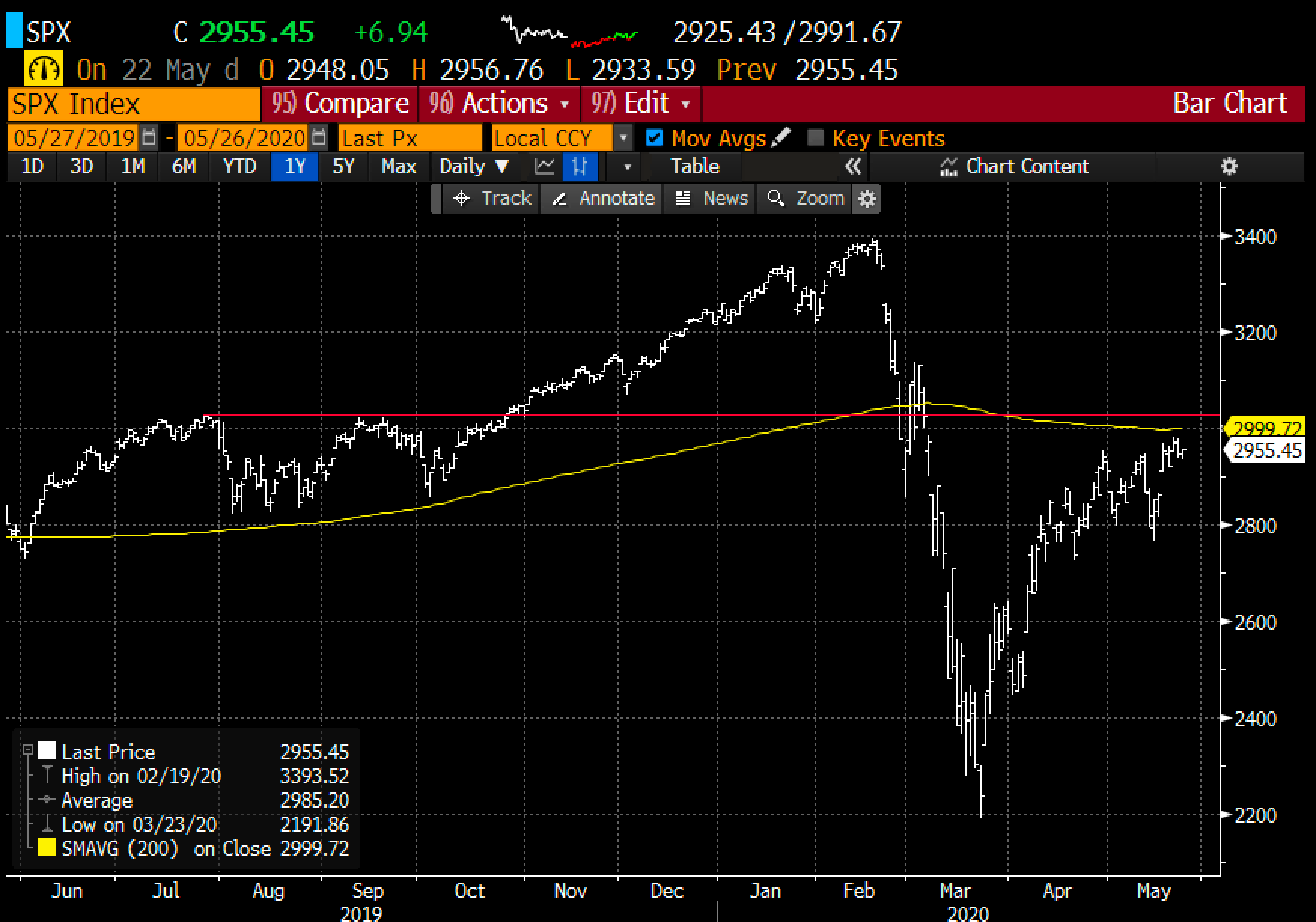 On the stock market sentiment front, my friend Peter Boockvar the CIO at The Bleakley Advisory Group this moring noted one indicator possibly overheating:

The Citi Panic/Euphoria index has now reached a new high over the past year in ‘Euphoria’. According to Citi, “Historically, a reading below panic supports a better than 95% likelihood that stock prices will be higher one year later, while euphoria levels generate a better than 80% probability of stock prices being lower one year later.” As seen below, it was good at marking the top in February and bottom in the 3rd week in March. 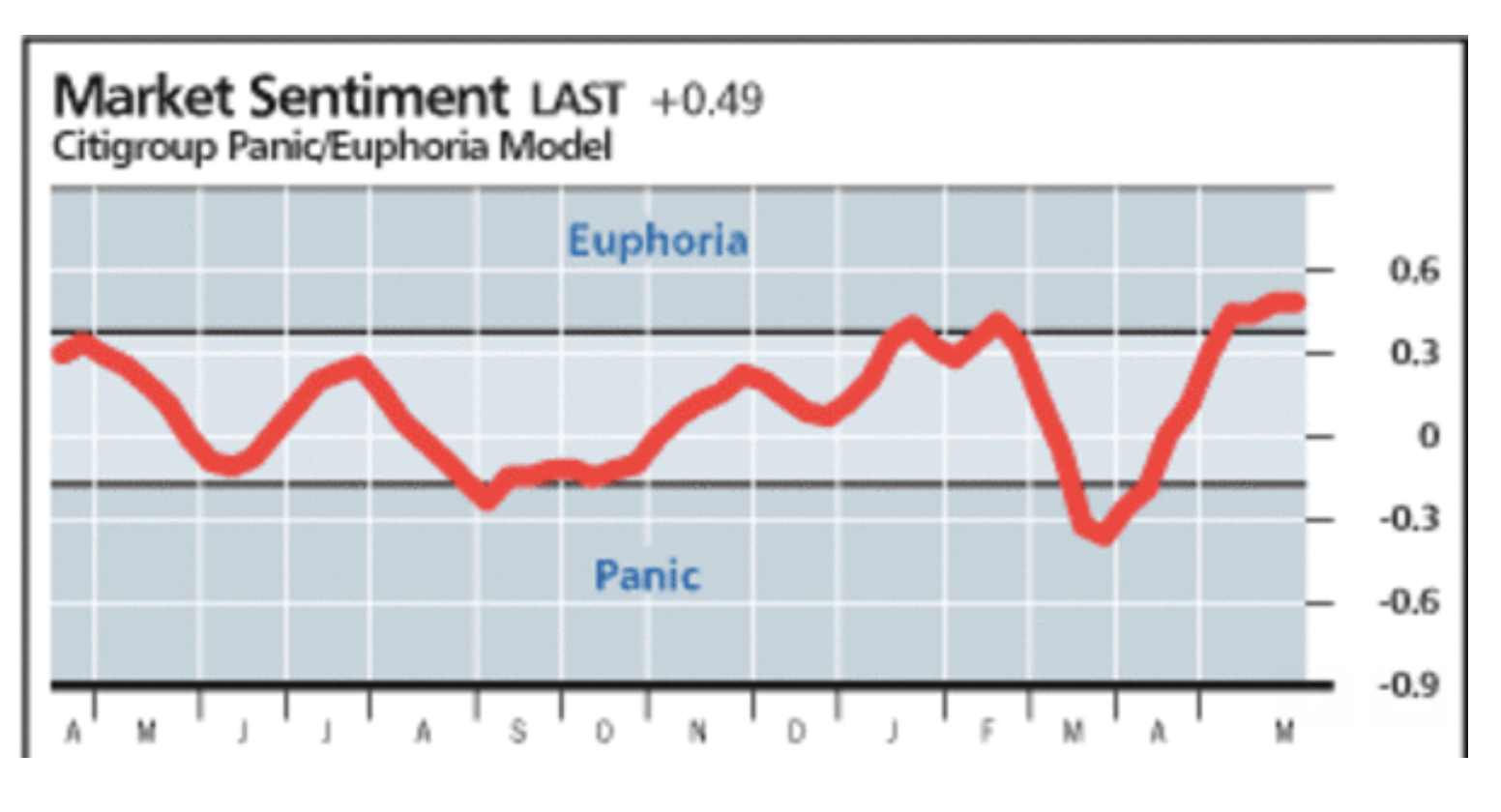 The story the stock market is telling us a sentiment indicator about the pace of reopenings and the progress on the vaccine front will not exactly translate to the damage done to our economy as a result of the shutdown, the impact on global trade, the devastation to specific industries but also broadly to small businesses in this country and what will likely be a far deeper recession with lasting impacts for years to come from a forever changed economy, less reliant on globalization and far more reliant on deflationary technology.

Tom Lee has been a steadfast bull on the stock market this year, by meticulously using data on the virus, his team makes the case how the stock market will look past the crush to earnings and GDP this year and anticipate vaccines in 2021 and markets will be at new highs before you know it as companies will emerge more profitable on the flipside. But this morning he suggests that we are not out of the woods yet, at least on the economic front as the news will get worse before it gets better: 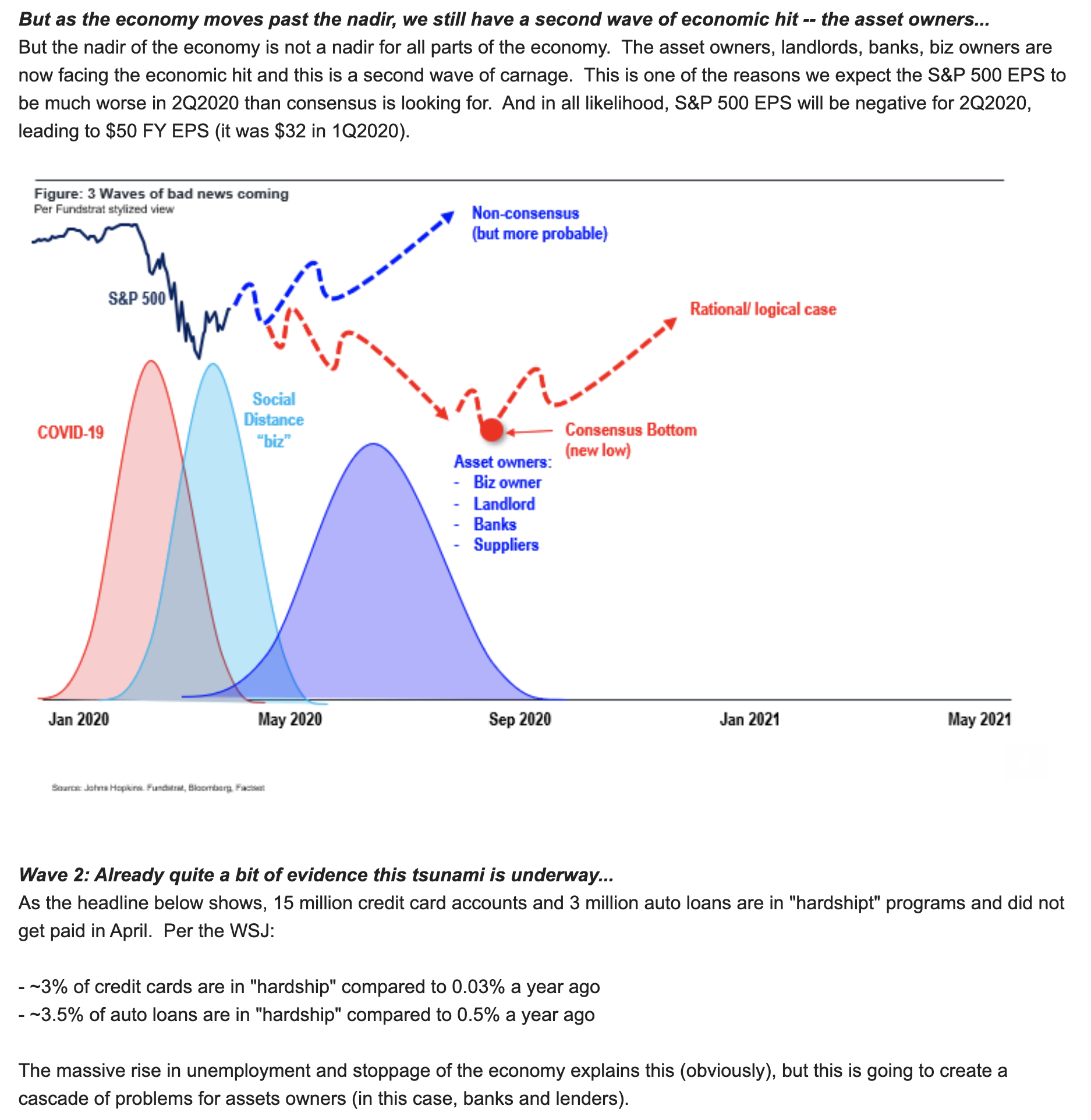 As regular readers know I am not partially optimistic about the pace of the recovery. I do not think the stock market truly reflects the challenges that laid off and furloughed workers face getting employment back. By the end of this week, there will be close to 40 million Americans who have filed for unemployment benefits in just the last ten weeks and economists who don’t work of the White House are suggesting that no matter how quickly the economy reopens, per the NYT, Many Jobs May Vanish Forever as Layoffs Mount:“

I hate to say it, but this is going to take longer and look grimmer than we thought,” Nicholas Bloom, an economist at Stanford University, said of the path to recovery.

Mr. Bloom is a co-author of an analysis that estimates 42 percent of recent layoffs will result in permanent job loss…

Many point to the additional unemployment benefits of $600 per week for many unemployed workers as a source of optimism for a quick consumer-led rebound, but that assumes all of these workers get their jobs back and that excess cash can be used for discretionary purposes.
And on the business front (even doctors), despite many economists/strategists who suggest that the efficiencies born out of the crisis will make businesses leaner, but as the WSJ suggested last week, The Covid Surcharge: Companies Confront the Unforgiving Economics of Coronavirus:

Companies from major retailers and package carriers to local restaurants and hair salons are awakening to a new economic reality in the age of the new coronavirus: Being open for business is almost as hard as being closed.

Facing higher costs to keep workers and customers safe and an indefinite period of suppressed demand, businesses are navigating an ever-narrower path to profitability. To make the math work, some businesses are cutting services and jobs. Others are raising prices, including imposing coronavirus-related fees aimed at getting customers to share some of the expenses.

Axios’s Courtnay Brown highlights this effect on small businesses, who employ nearly half of our workers in our country A reckoning for small business:

The big are getting bigger while the smallest shrink — or disappear. It was hard enough to compete before the pandemic. But now, their giant competitors — some of which kept operating as essential or have huge online presences and more resources — are thriving, as corporate earnings reports this week showed.

Half-capacity and tighter margins. Among restaurants, for example, “distance eating” will require pouring a lot of money into keeping diners away from one another and from the waitstaff, as Axios’ Jennifer A. Kingson reported this week. Small stores may not be allowed to let in as many shoppers at a time as they had before.

Less demand. Businesses that rely on foot traffic during the workday, for example, will see demand dry up as bigger corporations tell their workers to stay home (possibly forever).

And high levels of unemployment are expected to persist even as the economy reopens, which will crimp consumer spending that small businesses rely on.
The lingering threat of a “second wave.” Although President Trump has vowed to keep the economy open even if there’s a fresh spike in coronavirus cases, individual states and businesses could proceed differently — as they did the first time.

There will be no shortage of improved data sets that will support investor optimism about the economic recovery, but it is worth noting that many of the decade low data points we were getting at the end of last year early this year, particularly in the unemployment rate were coming at an increasingly dangerous cost to further growth as the Fed embarked in a rate-cutting cycle in mid-2019 and ease initially restated Quantitative Easing in the Fall, 10-years into the recovery from the Great Recession. The economy was already living on borrowed time, specifically on the jobs front, now we might be in for record-high unemployment for months, or even quarters, per the WSJ, The Job Market’s Long Road Back:

Gregory Daco, chief U.S. economist at Oxford Economics, a U.K.-based forecasting and consulting firm, forecast that about half of workers laid off or furloughed in March and April, or at least 10 million people, won’t be returning to their old jobs, or roughly the same number that permanently lost jobs in the 2007-09 downturn. His forecast considers that in recessions since World War II, most layoffs have been permanent, and that several large employers have signaled that recent temporary layoffs are becoming permanent.

The jobless rate, which was 14.7% in April, is expected to remain well above anything seen since records started after World War II through this year, according to a May 8-12 Wall Street Journal survey of 64 economists, which forecast the rate will be 11.4% in December. The nonpartisan Congressional Budget Office sees unemployment peaking at 15.8% this summer and ending 2021 at 8.6%. 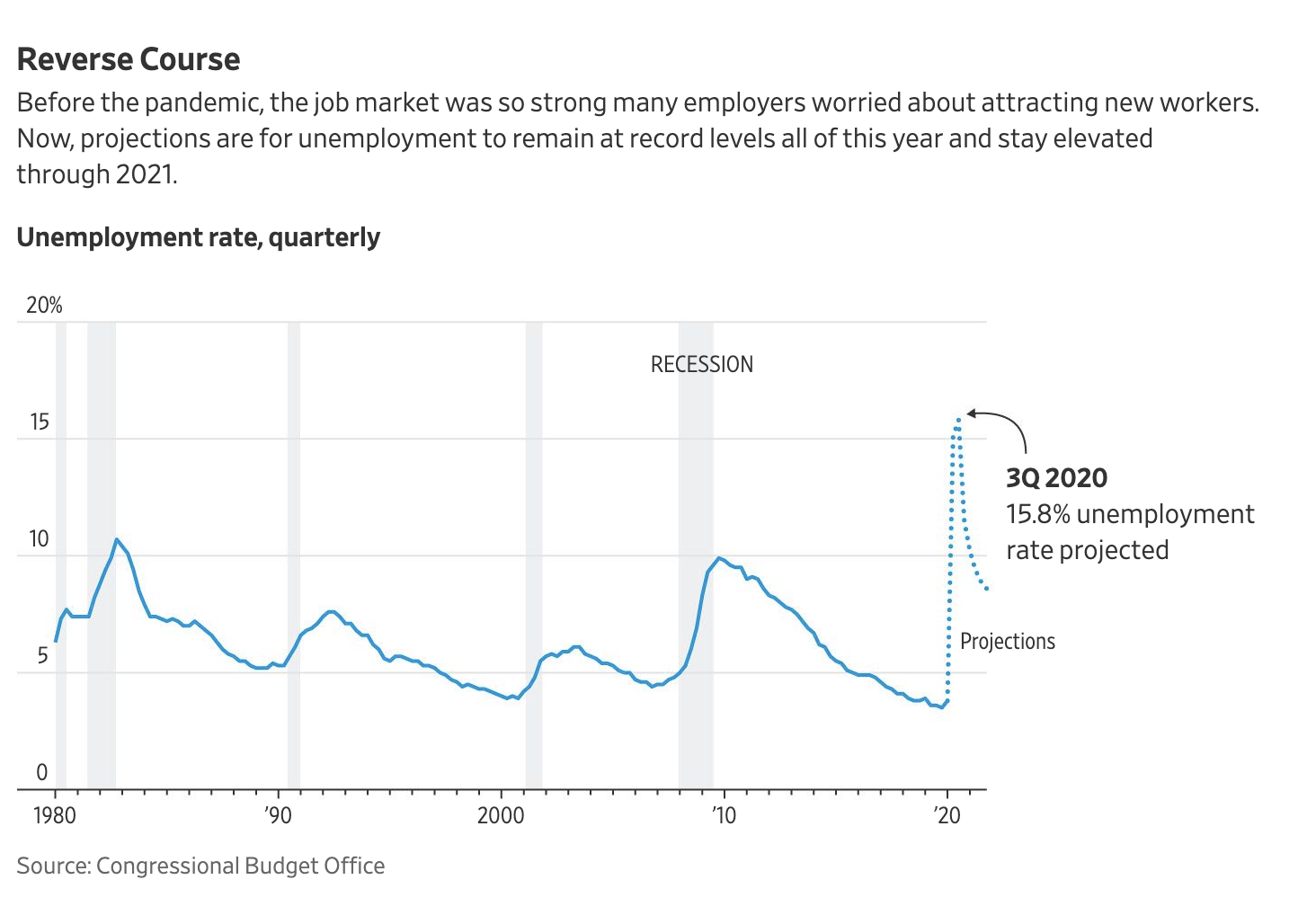 I am not being downbeat for the sake of it, like you, I would love to have the confidence that our scientists have therapies and ultimately vaccines for this virus so we can get back some sense of normalcy, I would love to know that our elected officials can come to terms with the miserable failure to protect their citizens and their livelihoods and I would love to believe that printing trillions of dollars out of thin air to help stave off an economic depression will not have long-lasting impacts that include the widening of income inequality.

The S&P 500 trading at 3000, given everything we know about the current economic situation and what lies ahead does not (in my opinion) reflect any of the risks, and all of the optimism about best-case outcomes.