Since Monday morning’s opening gap of 3% in the S&P 500 (SPX) on a double dose of welcome news from the Fed and on the prospects of a coronavirus vaccine coming sooner than later, the index has treaded water trading most of the week between 2940 and 2975: 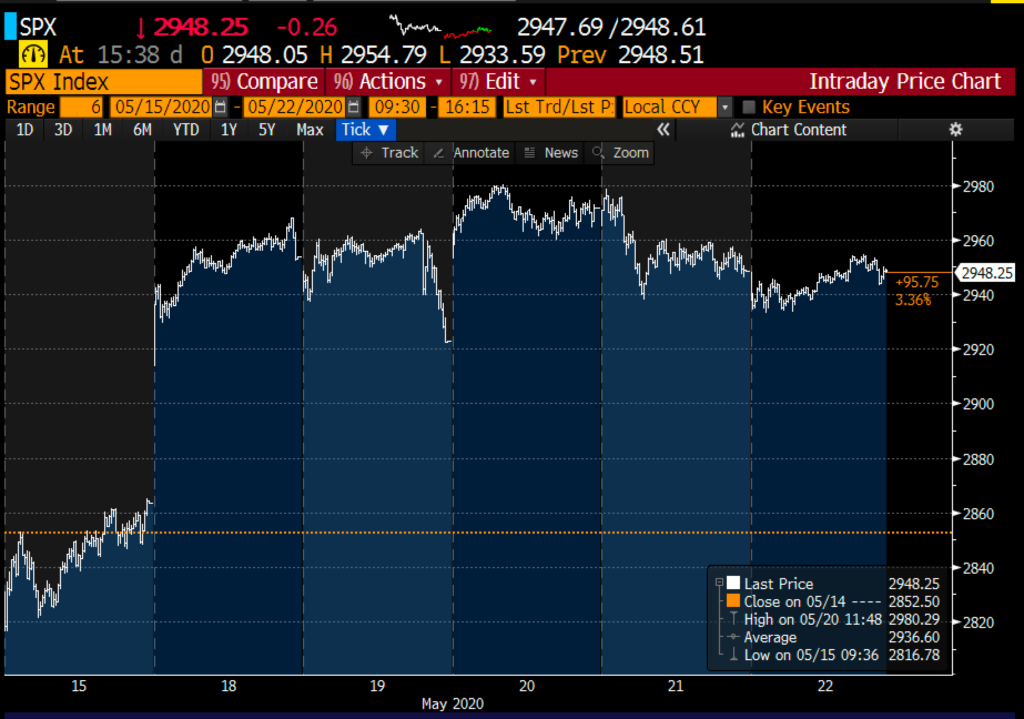 The SPX appears to be consolidating just below formidable technical resistance at 3000, its 200-day moving average and its October breakout level near 3025: 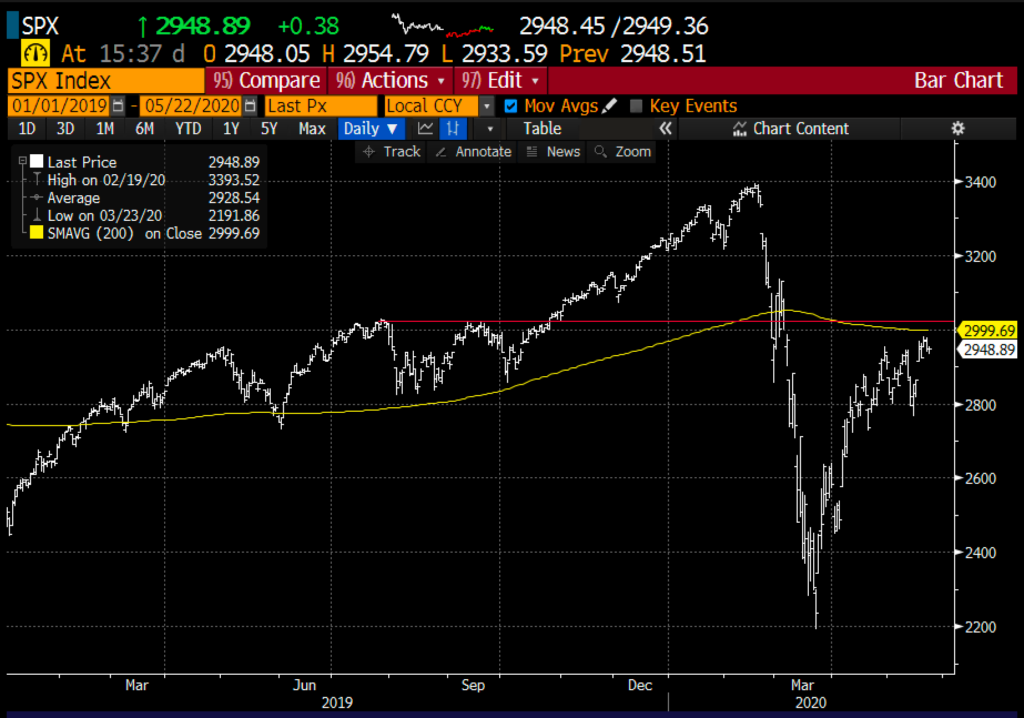 On Wednesday’s Fast Money I addressed this level in the SPX, and while many investors are looking for a breakout above resistance as a sort of all-clear sign to ride the market to near highs… I remain concerned that at current valuations, and the uncertainty about the pace of the economic recovery, a lot of good news is priced in at the moment…

“I am not getting constructive on equities here,” says @riskreversal. He explains why pic.twitter.com/kOXTib5tIQ

And yes valuations are not a problem for investors crowding in growth pushing mega-cap tech and SaaS to new highs, or looking to speculate on beaten-up sectors…

The last point I made in the video was the mountain of cash that is sitting in money market funds by retail and intentional investors, from Fundstat: 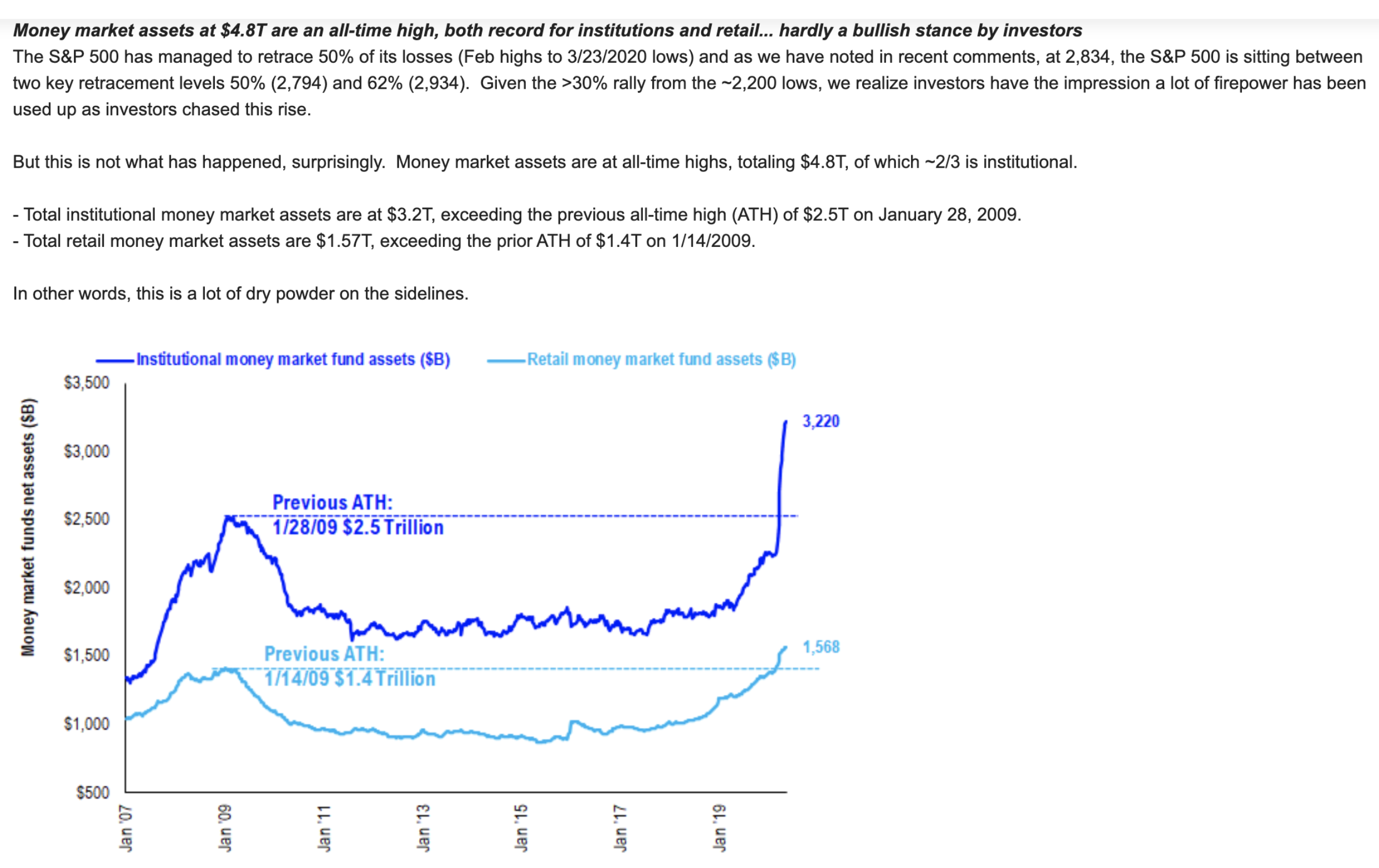 On Monday in this space, I highlighted Morgan Stanley’s weekly Long /Short Hedge Fund exposure report, which helps make the point above, they were at very low levels compared to 1 and 10-year averages, and down week over week:

Yesterday’s report, after Monday’s 3% plus gain, and the ability for the SPX to remain bid all week shows a dramatic increase, and getting back very near historical levels:

I have also seen some investors pointing to the tightening of the spread of the market cap. weighted SPX and the equal weight SPX (RSP), showing a broadening out of the rally off of the lows… meaning less reliance on the mega-cap tech, so healthier… 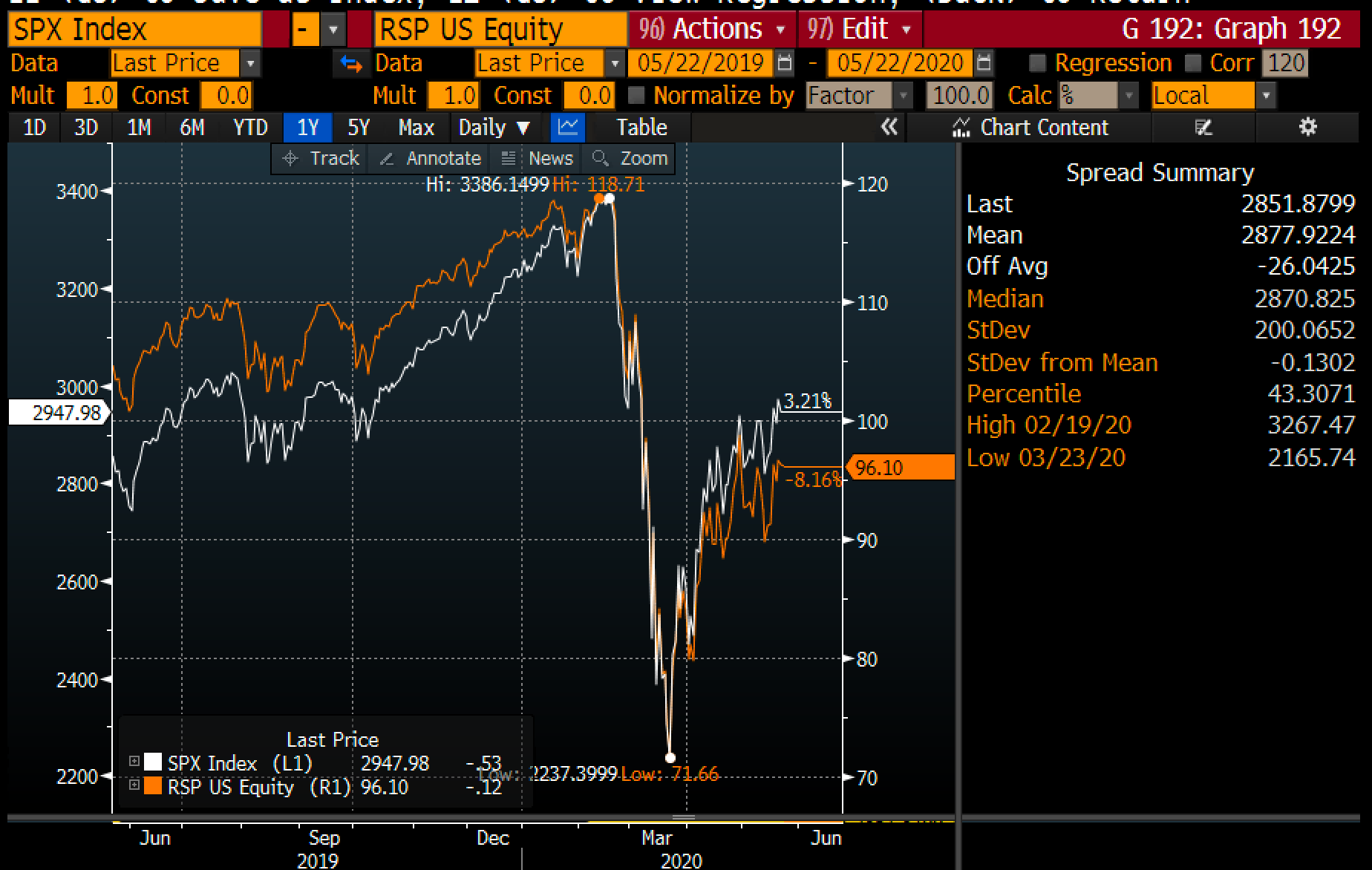 This tweet from Charles Schwab Chief Market Strategist Liz Ann Sonders highlights another point I alluded to in the video above… the Fed’s historic actions have buoyed risk assets, but they have been divorced from all historical correlations to what should be the driving force of stock prices… earnings.

Intuitively, we can sense that stocks have disconnected from earnings estimates; but check out below, which shows that correlation betweeen S&P 500 & forward earnings estimates has been +.90 over past 20 years, but a mirror image -.90 since 3/23/20 pic.twitter.com/7xet0QqXLX

So this might come as a shock to you, but I am not optimistic about a meaningful breakout and a run this summer to new highs. The main reason which I have spoken about repeatedly is what I believe will be sustained high levels of unemployment through the end of 2021 and the constraints that will place on discretionary consumer spending. Lets be very clear, a few months ago we were at 60-year lows of unemployment below 4%, we are lonely to get as high as 25% this summer, and then see a new floor in the high single digits, it possibly 10%. This does not even account for the potential of a second wave of the virus in the fall or winter and likely includes the prospects of a vaccine sometime in mid-2021.

Lastly, Facebook (FB) released a report on small business this week, and what the 86,000 respondents reported was devastating and did not get enough attention in my opinion when you consider small businesses are responsible for close to 50% of the jobs in this country, per CNBC:

Facebook said it surveyed 86,000 small and medium-sized business owners, managers and employees for an ongoing data initiative with the World Bank and Organization for Economic Cooperation and Development. The report highlights the lasting economic impact of the coronavirus and the especially dire effect it’s having on smaller businesses without the same level of access to capital that larger corporations often have.

According to the report, only 45% of owners and managers of small and medium-sized businesses surveyed by Facebook said they would rehire the same workers they were forced to let go or furlough once they reopen. If that estimate holds true for similar businesses across the country, it could devastate predictions for a swift economic recovery from the crisis.

About a third of closed businesses surveyed said they do not expect to reopen, with many citing an inability to pay bills or rent.

Oh and talk to anyone you know who runs a group at a non-manufacturing related large business in America, they have been unable to fire people during a health pandemic due to the poor optics, but their managers are asking them to ready the pink slips for the summer and spring. This is a truly sad state of affairs, once some of the jobs come back in industries like hospitality, transportation, retail and energy, the corporate jobs will be next on the block. I say this with no glee, I feel that looking at this crisis through the lens of the stock market is entirely inappropriate, at this point it is a rigged game by the Fed and we will all be deeply saddened if the trillions of dollars in financial assistance earmarked by the Fed and the Treasury to help workers did little more than to prop up zombie businesses and risk assets and not aid those in need of livelihoods.

The second half of 2020 is likely to feel worse from an economic perspective than the first half in my opinion as the assistance runs out and many jobs don’t come back. Let’s continue to prepare for the worst and hope for the best.

It is my view that the upside downside risk-reward in the stock market is 1 up 2 down at the moment… earnings estimate for 2020 and probably most of 2021 are still too high if unemployment settles near 10% in the back half of this year.

Oh and One More Thing, the chart of JPM remains one of the most troubling for near-term gains in the SPX given their exposure to so many parts of the economy that are struggling and will remain challenged. 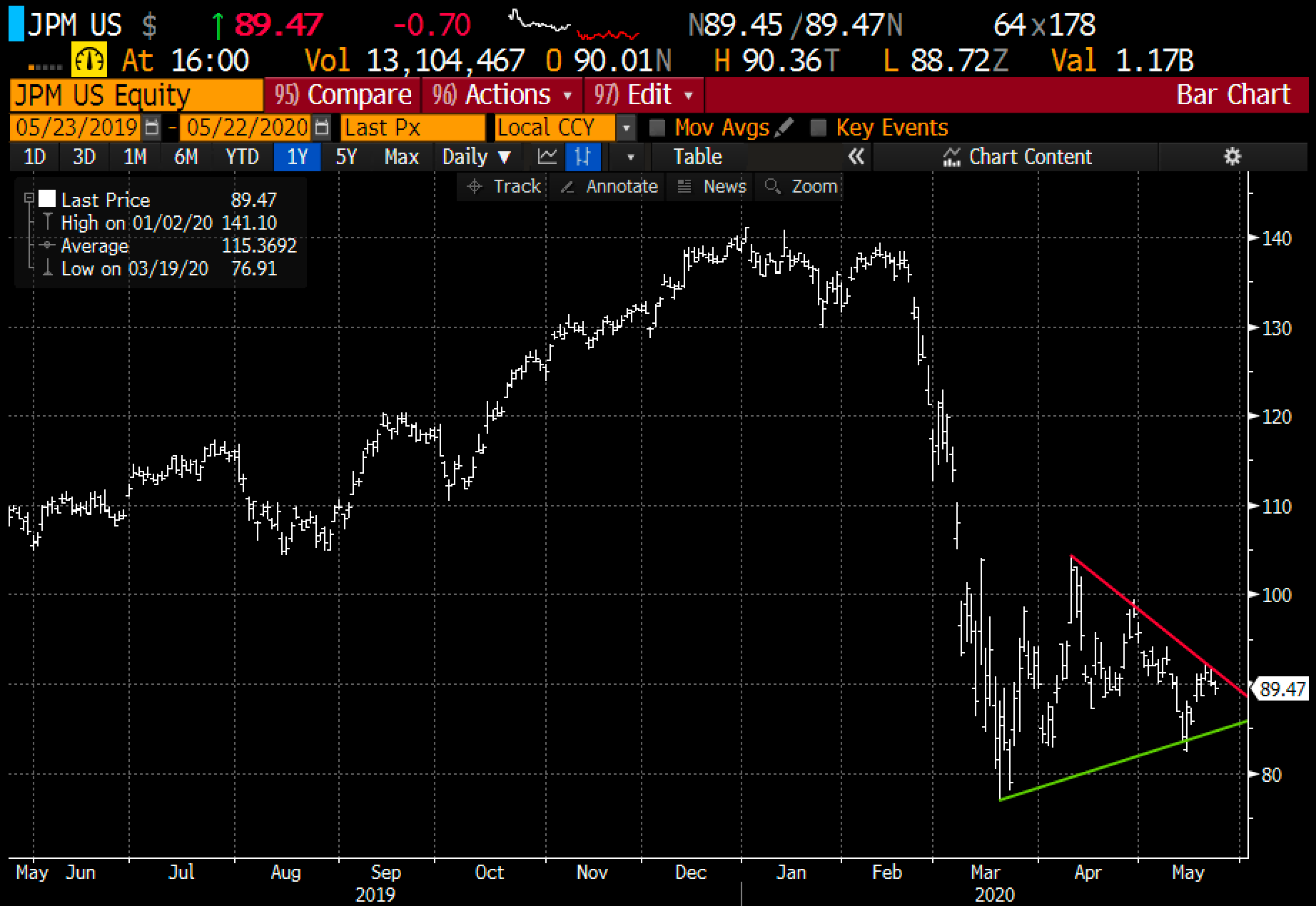 Have a great Memorial Day Weekend.