Target (TGT) will report its FQ1 earnings tomorrow morning before the open. The options market is implying about a 6% or $7.50 one-day move tomorrow, which is well below the 11% average the stock has moved over the last four quarters.

Shares of TGT are down only 3% on the year, down about 12% from its all-time highs made in December. The stock found support in March at last summer’s breakout level at $90 and is now quickly approaching resistance at the Dec high near $130. Healthy near-term support appears to be the mid-point of the 10-month range near $110, which also happens to be the near convergence of the rising 200-day moving average and the decline 100-day moving average: 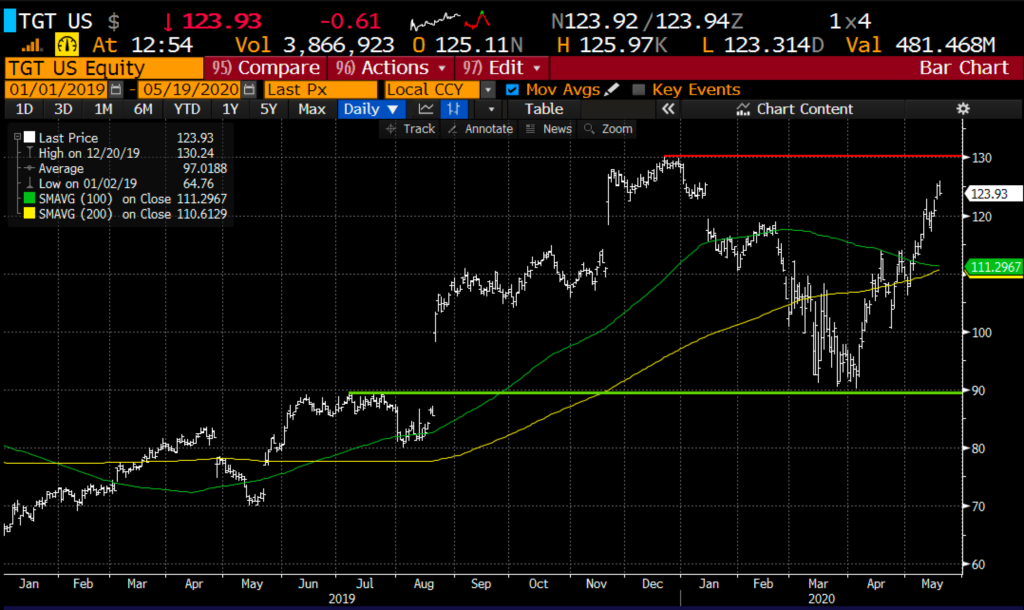 EPS for fiscal 2021 is currently expected to be down 25%, causing its price to earnings multiple to look fairly hefty at 25x, placing it near its behemoth rival Walmart (WMT) for the first time in a very long time, but with an expected EPS ramp of 40% plus in 2022, to a new peak, the multiple is expected to come back from a 10 year high to the high teens, but still above the ten-year average in the mid-teens: 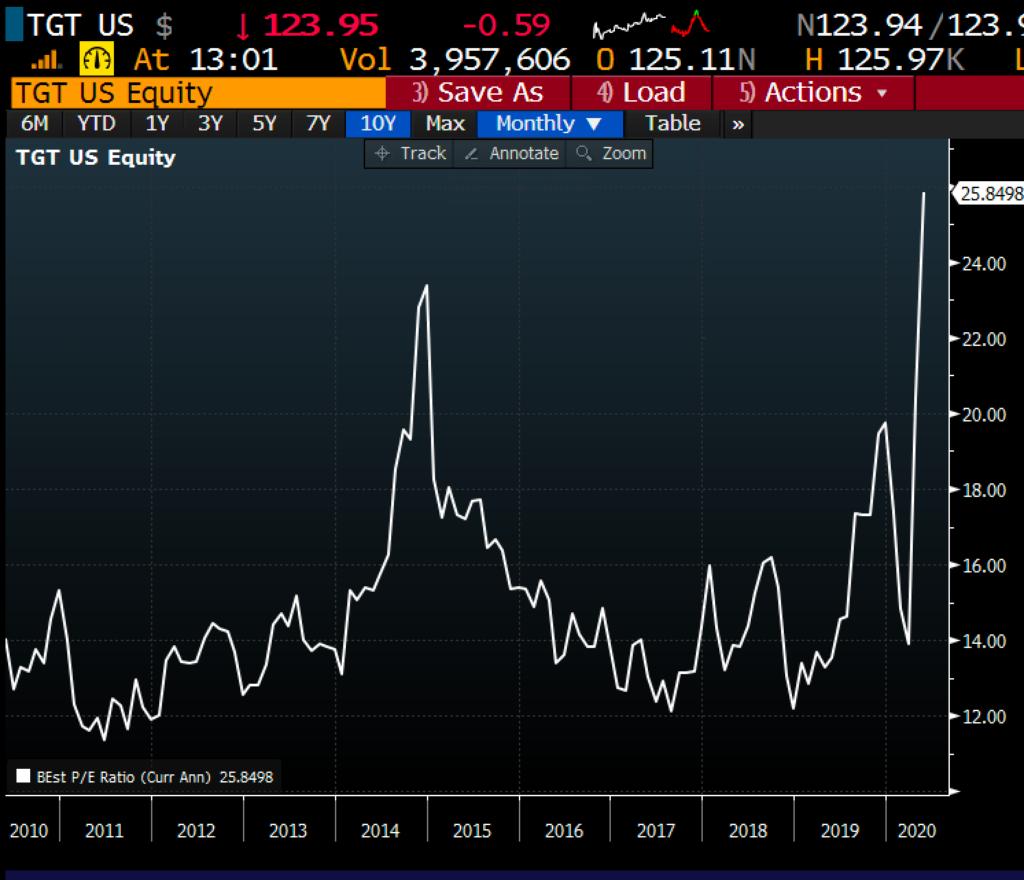 It is worth noting that WMT reported their FQ1 results that were better than expected, causing the stock to gap up 3.5% today, within 2% of a new all-time high, before the stock found some sellers, and now is trading unchanged on the day. I am hard-pressed to think that there is a lot of good news priced into shares of TGT at current levels and it would take a meaningful beat and more importantly raise, for the stock to make a new high.

Oh and when I use the term behemoth rival to refer to WMT, it is no joke, WMT is expected to have early $545 billion sales in the current year vs $80 billion for TGT which explains to a large degree why TGT’s $62 billion market cap is one-sixth of WMT’s.

There has been no shortage of consumer-related trends that have been accelerated during the pandemic. The fact that some retail had been deemed essential businesses, like TGT given their large grocery offerings. It is also worth noting that investments in online shopping which for years suppressed TGT & WMT’s earnings power have been aptly rewarded as online shopping has become a bigger piece of the pie, and now what might be a necessary barbell approach for retail in a post-pandemic economy.

Back in early 2017 when there was a lot of noise about Amazon (AMZN) building out their own bricks and mortar retail strategy, opined; Does Amazon Dream of Electric Shoppers?:

Last night the New York Post highlighted the potential for Amazon to not only take on quick stop convenience grocery stores but also stores “that could span anywhere between 10,000 and 40,000 square feet” and “Amazon will utilize technology to minimize labor”, which could call “for staff to max out at 10 workers per location during any given shift”.

While investors might immediately think this could be the end of Whole Foods Markets (WFM) and smaller rivals like Sprouts Farmers Markets (SFM), it might make sense for AMZN to purchase the infrastructure and re-automate the stores in locations that consumers are already conditioned to go to.

Shortly after this Albertsons flirted with buying SFM, and Amazon paid nearly $14 billion for WFM. I would expect AMZN’s omnichannel approach to continue and we will see competitors to AMZN and WMT look to do the same. TGT. TGT’s $62 billion market cap and solid balance sheet make it both an acquisition target and an acquirer imo.

So what’s the trade? If you agree with the thesis above, it might make sense to look for near-term consolidation below the prior highs at $130 and take advantage of elevated options premiums by selling a short-dated out of the money call and using the proceeds to buy a longer-dated out of the money call of the same strike, what we refer to as a call calendar spread, for instance:

The ideal scenario is that TGT is near $130 on June expiation, if below the short call will expire worthless and you will be left long the Oct 130 call for only $5 as opposed to the $8 it costs now. If the stock is at or above the 130 strike than the short call can be covered if you want to stay long the Oct 130 call. The idea of the trade idea is chip away at the longer-dated premium and set up for a rally later in the year.

Or If I were long the stock I might consider playing for consideration below the prior highs, and look to add some yield by overwriting my long stock position, for instance:

Profits of the stock up to $130, if the stock is below $130 on June expiration than take in the $3 in premium, adding a little more than 2% yield to the position that has also risen 5% at $130. The effective call-away level thought is $133, the short strike plus the premium, so up 7.2% in about a month. If the stock is at or above $130 on June expiration than the long holder could cover the short call to keep the long position intact if they want to stay long.

Or If I were looking for a miss and guide lower and a pullback to support near $110, I might consider the following defined risk strategy risking 2% of the stock price: