As most readers know, the stock market is what they call a discounting mechanism, looking past the here and now as investors do their best to figure out what future earnings and cash flows of companies will be worth. In times of uncertainty, like we have been in for the last few months, on multiple fronts, this job of assigning value to risk assets such as stocks can be very difficult resulting in volatility, to state the obvious.

Over the past twenty years, at fairly early signs of economic unrest, the U.S. Federal Reserve has stepped in to provide liquidity to the capital markets, in an effort to avert a collapse in financial conditions in support of their dual mandate for maximum employment and support stable prices for goods and services. In January 2001 (after a very volatile year in the stock market, with the Nasdaq, in particular, losing its shine after a massive ramp the prior year) the Fed instituted a surprise cut to the Fed Funds on just the second trading day of the year (when it was above 6%, on its way to 1%). 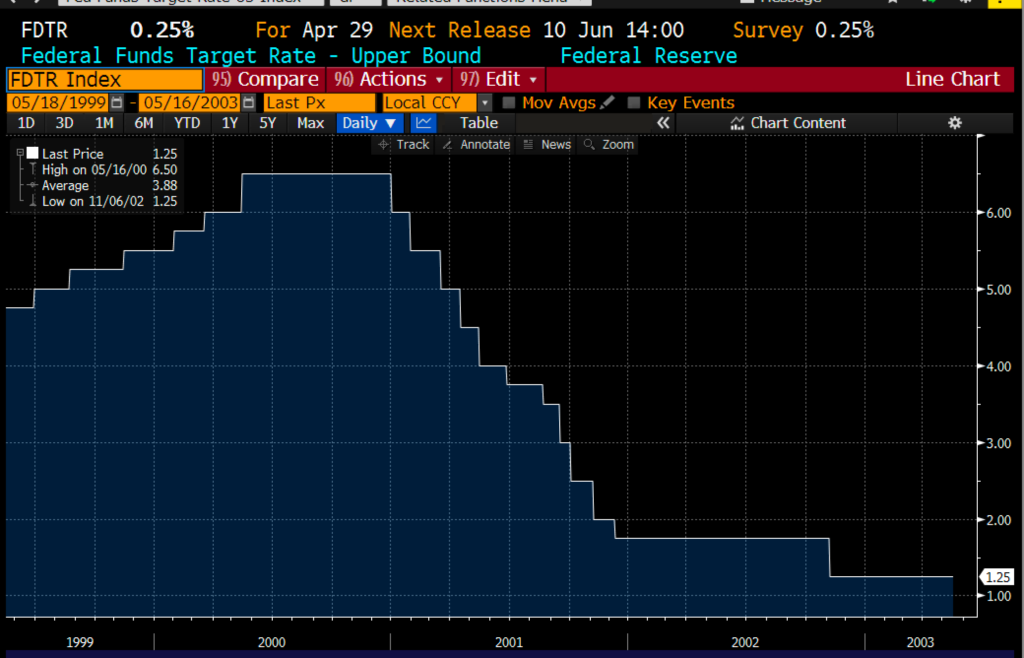 I remember the surprise rate cuts in early 2001 like it was yesterday, as I was short everything, and I got brutally squeezed in the second trading day of the year. Again in mid-April another surprise cut and my year were pretty much lost, at that point I could not trade my way out of a paper bag. In my short 5-year career I was destined to have my first losing year. Once you get yourself in a big enough hole the risk you have to take to attempt to get yourself out will not likely be palatable to your risk manager. That was the situation I found myself in after a very nice few year run where I was starting to think I was good at trading. 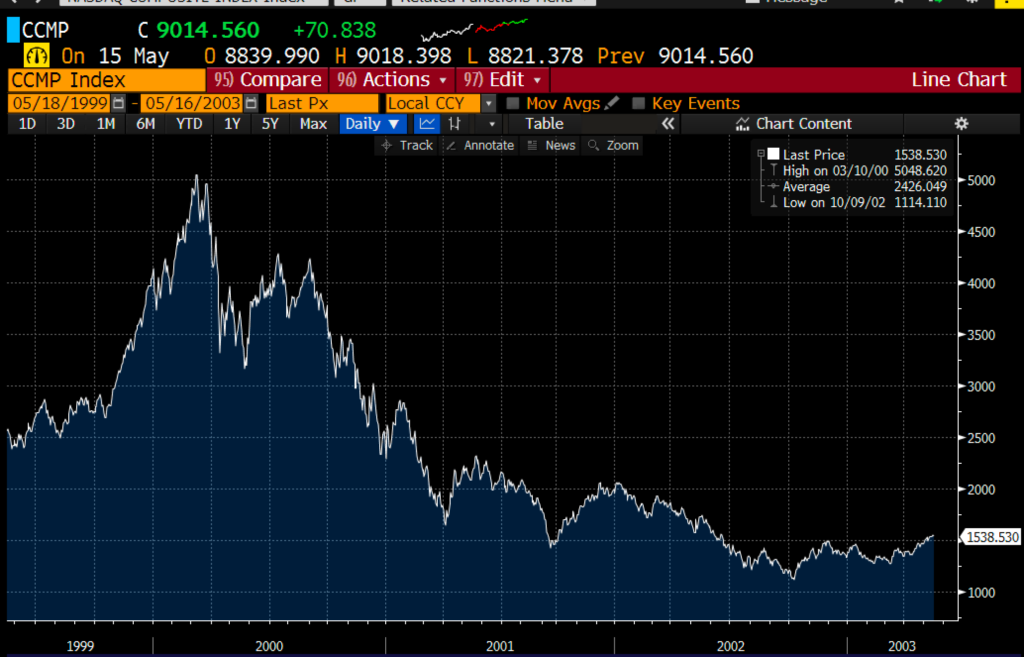 A lot went on in between, but it was a brutal protracted bear market for stocks, despite being a fairly shallow recession but despite it all, the Fed’s balance sheet never expanded to over $1 trillion: 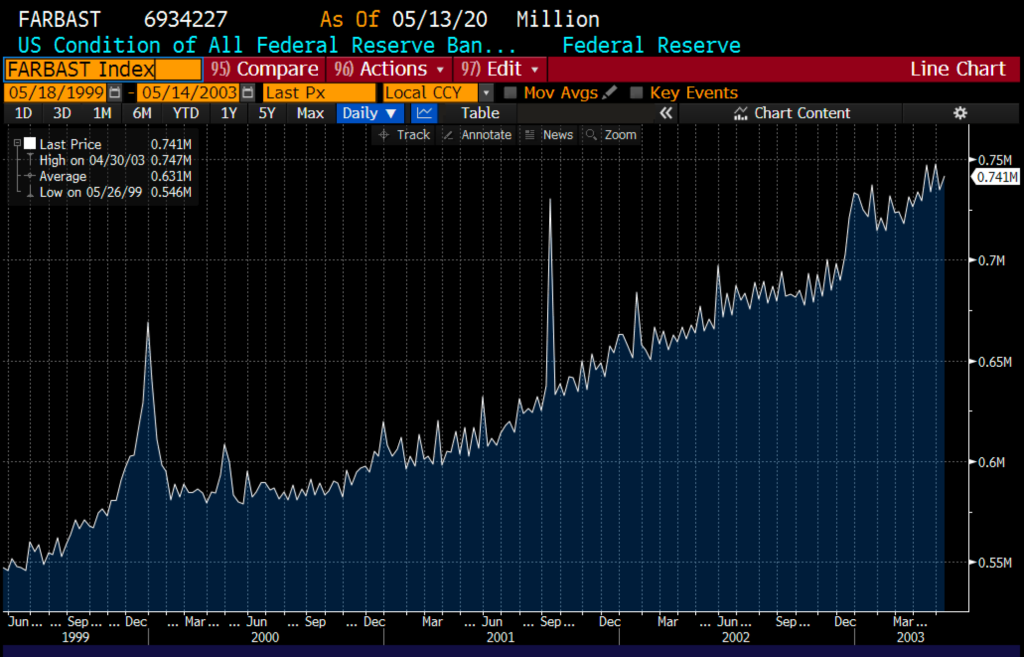 Then again in August of 2007 the U.S. Fed then led by Ben Bernanke, with stresses starting to emerge on the U.S. housing and related credit markets, opened their discount window, a year before the Financial Crisis was at its epicenter, with Fed funds about to go from 5% to essentially zero by the end of 2008: 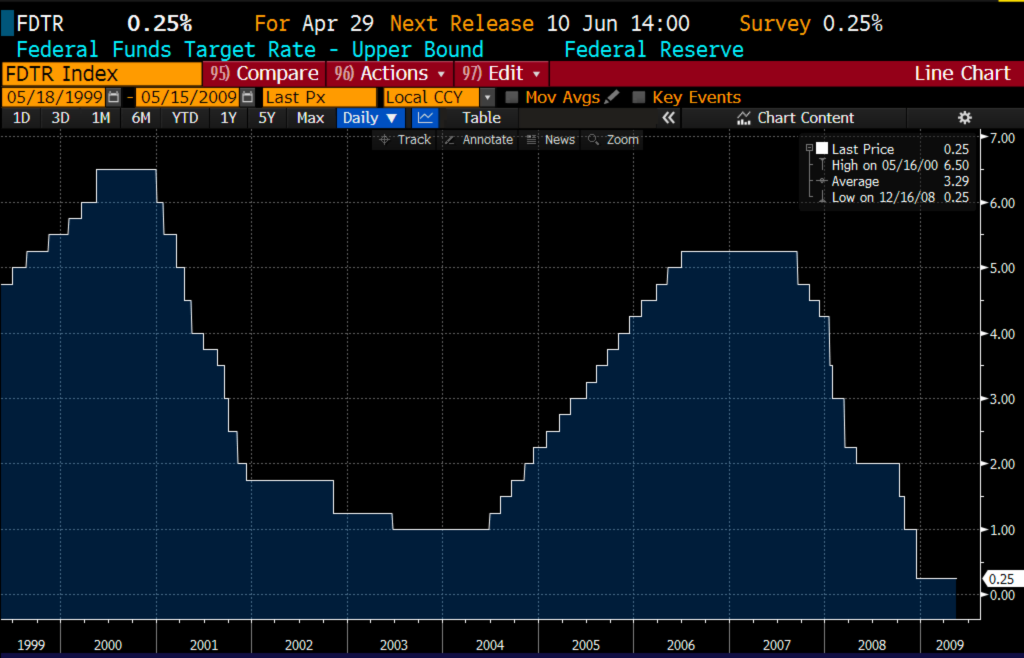 Their initial actions caused a huge short squeeze in the summer of 2007. But ultimately before it was all said and done, the S&P 500 would again lose half of its value. 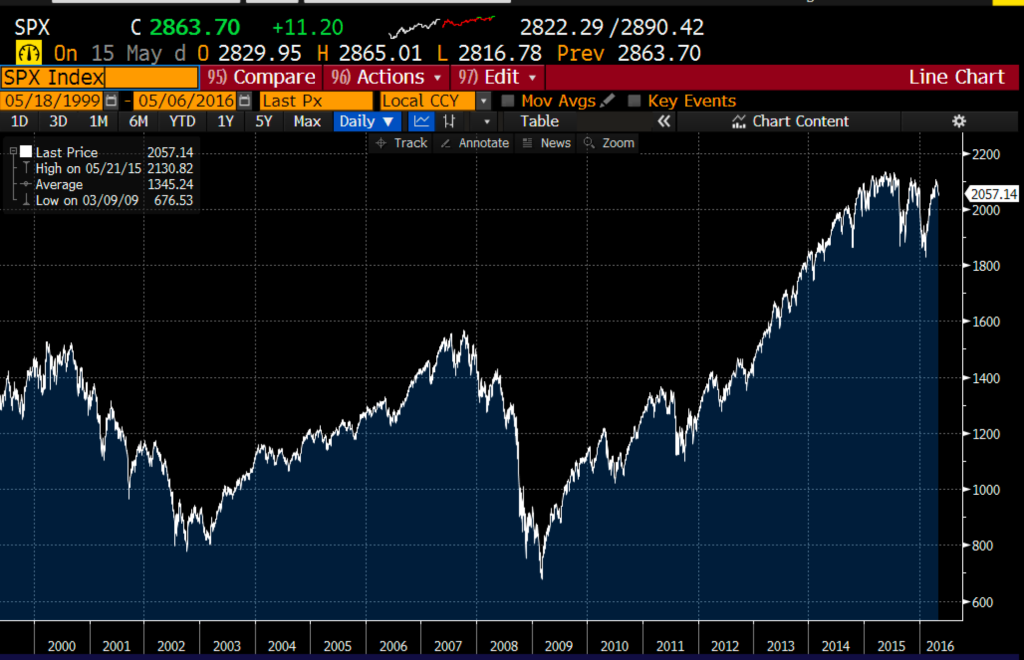 But this time the Fed’s balance sheet would eclipse that $1 trillion number on its way to leveling off in 2016 at $4.5 trillion: 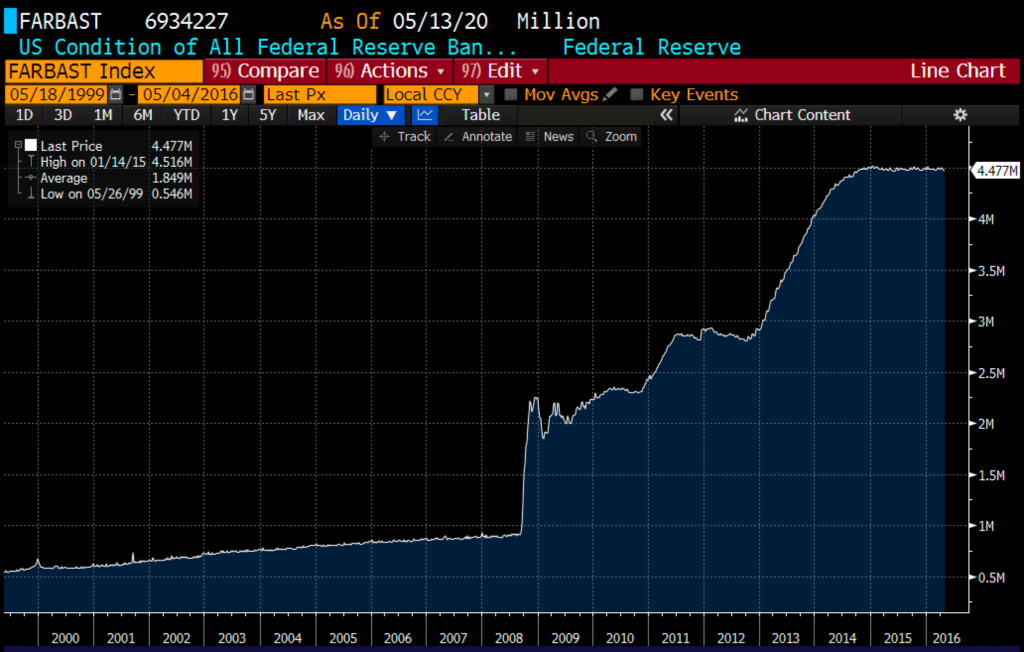 There are few that would argue that the Fed wasn’t early to act in this crisis, interestingly front-loading their response compared to the prior two crises/recessions, that saw its financial assistance grow substantially over multiple years. Last night on CBS’s 60 Minutes program Fed Chair basically said they will do whatever it takes in support of their dual mandate (watch and read here). That got S&P 500 futures moving higher last night to the tune of 1%, after the first weekly decline in two months. Importantly, Chair Powell dropped this nugget relating to data that is top of mind for the Fed:

The thing that matters more than anything else is the medical metrics, frankly. It’s the spread of the virus. The real-time economic data that we’re seeing is just a function of how successful the social distancing measures are. So, the data we’ll see for this quarter, which ends in June, will be very, very bad. There’ll be a, you know, big decline in economic activity, big increase in unemployment. So what we’re really looking at is getting the medical data, which is not what we usually look at, taken care of so that the economic data can start to recover.

This morning biotech company Moderna goosed the S&P futures up more than 2% after reporting some success in their coronavirus vaccine trials, via WSJ:

human subjects in a Phase 1 trial of a candidate Covid-19 vaccine produced immune responses that were a positive sign of the vaccine’s potential to prevent infection with the new coronavirus.

Back to therapeutics for the economy…

Well here we are again, a committed Fed having lowered Fed Funds rate from above 2% to essentially zero again, and the Fed’s Balance sheet expanding to near $7 trillion, not to mention the trillions that Congress has spent through the Treasury in financial assistance (and will likely continue to doll out trillions). 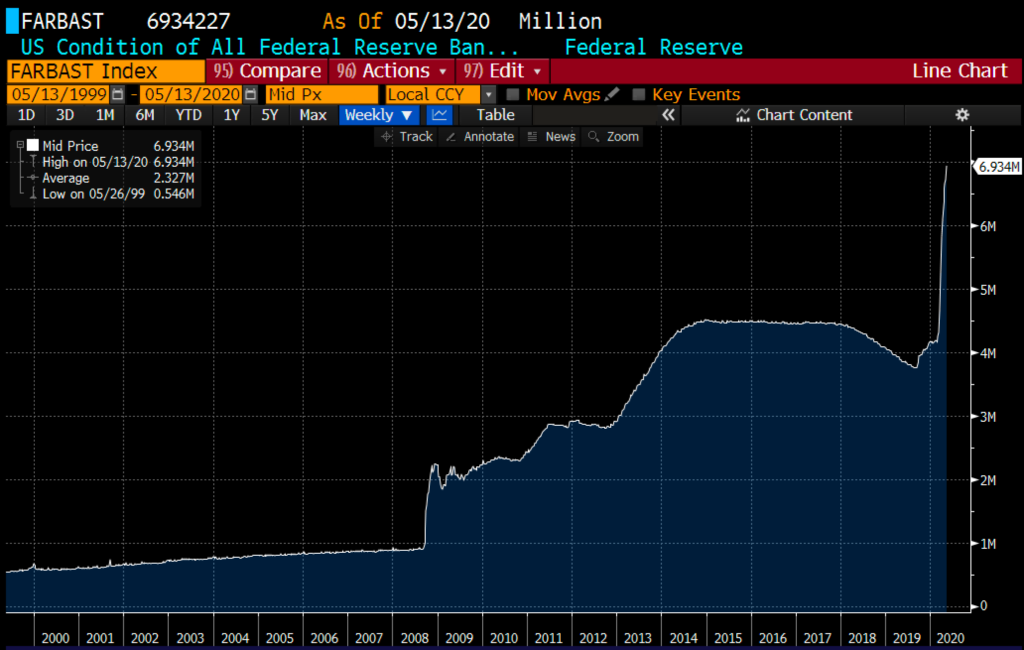 The stock market had a 35% peak to trough decline from the Feb highs. It has now rallied back 35% placing it down just 10% on the year and 13.5% from the high. Despite all of that, the S&P 500 has made little ground in the last month.

One thing I have not mentioned in this post is the unemployment picture, and what all of this stimulus might actually do for U.S. workers, as opposed to keeping risk asset prices buoyed. Last week I offered my downbeat views, and what it might mean for consumer dictionary spending (read here), but don’t take my word for it, listen to Chair Powell:

Powell told us the economy will shrink dramatically in the second quarter, April, May and June, at an annualized rate of around 30%. This past week, the Labor Department reported a total of more than 35 million Americans had lost their jobs so far. The unemployment rate will be historic.

Jerome Powell: There’re a range of perspectives. But those are– those numbers sound about right for what the peak may be.

Does all of this cash from the Fed & Treasury cause me to change my cautious tone towards stocks in the near term? Not really, if Moderna and others racing for the vaccine can make big strides, then the stock market will easily break out of its range below 3000, discounting a whole heck of a lot going forward, given the headwinds to growth from high unemployment from a changed economy, vaccine or not, large fiscal deficits and an explosion of corporate debt.

But there is one store of cash that could change the who equation of the stock market in 2020…. the trillions that is not invested, waiting for that re-test, from Morgan Stanley on Hedge Fund exposures: 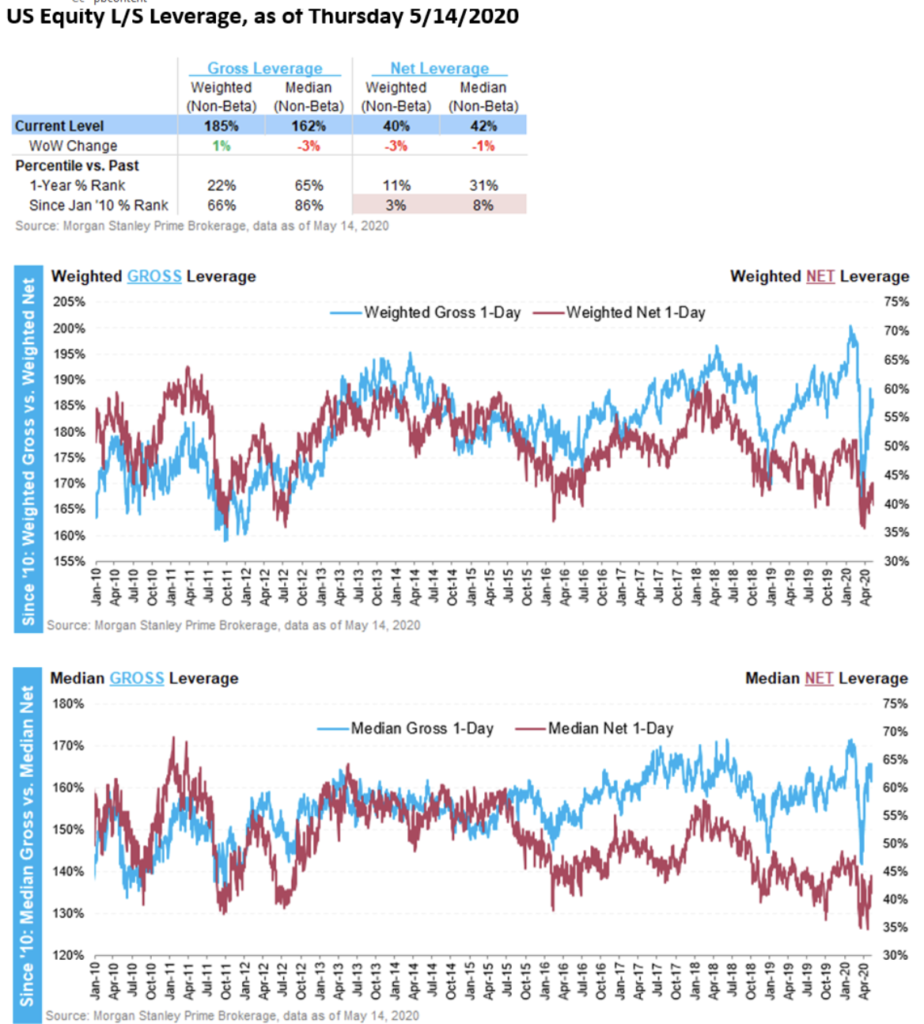 And here from Fundstrat on cash in Money Market Funds (institutional & retail), at all-time highs: 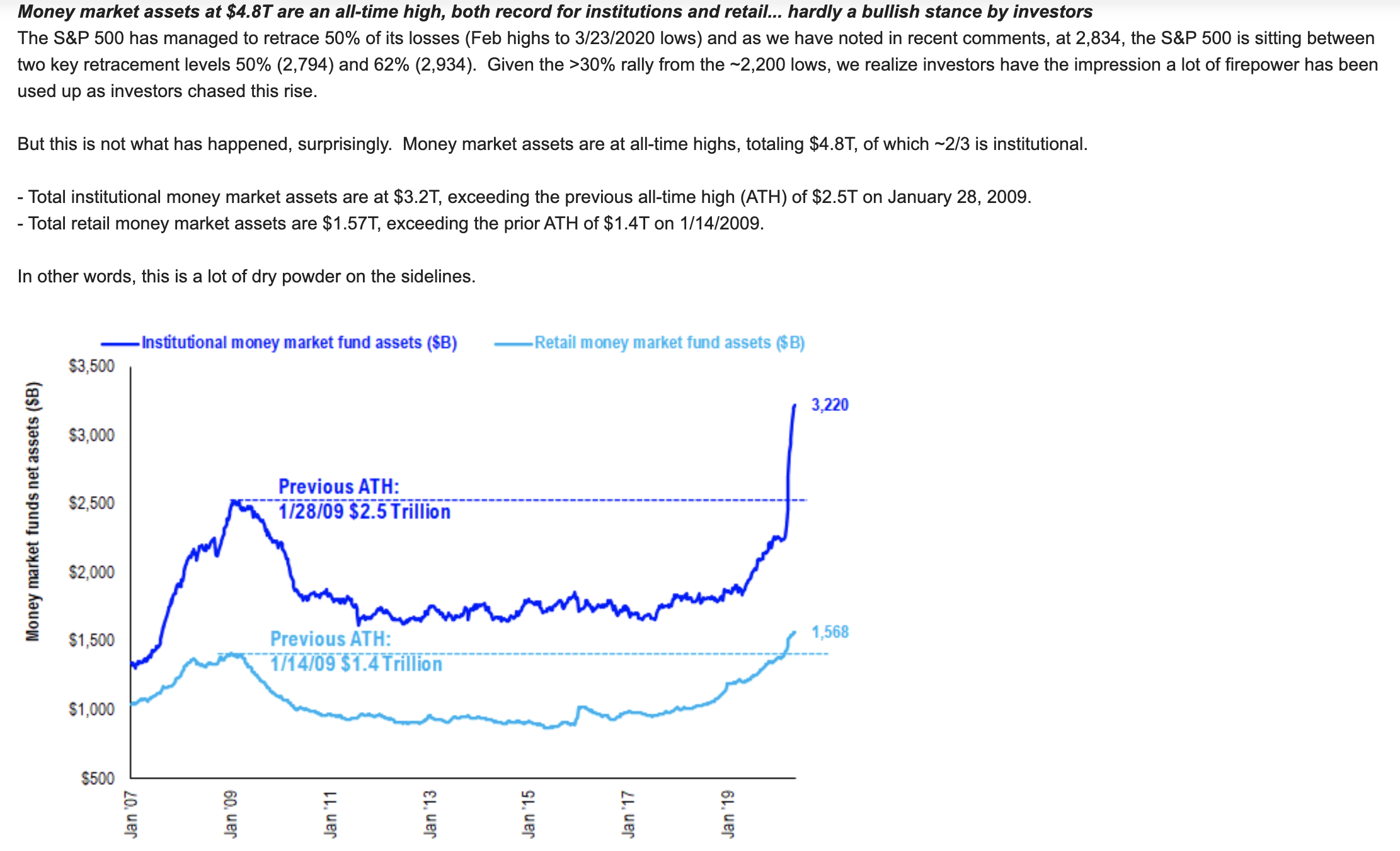 So I will leave you with this… I am hopeful that early signs of progress on therapies and vaccines for the virus come far sooner than we could have hoped for just two months ago. The stock market today is discounting some very optimistic scenarios. But I guess all that cash on the sidelines is burning holes in pockets while offering little return.