A few weeks ago daily fantasy and sports betting upstart Draftkings (DKNG) went public via a merger with a SPAC, which also included an agreement to merge with gambling-technology provider SBTech Global Limited, which provides online betting platforms and odds-making services, per WSJ. The timing might not have been great from an optics standpoint on the listing front given the fact that almost every sport that one might want to bet on is closed down for the foreseeable future, investors are looking past the covid-19 crisis with the stock up 150% from its 2019 lows when the company agreed to merge with the blank check company, now trading very near an all-time high sporting a nearly $8.5 billion market capitalization: 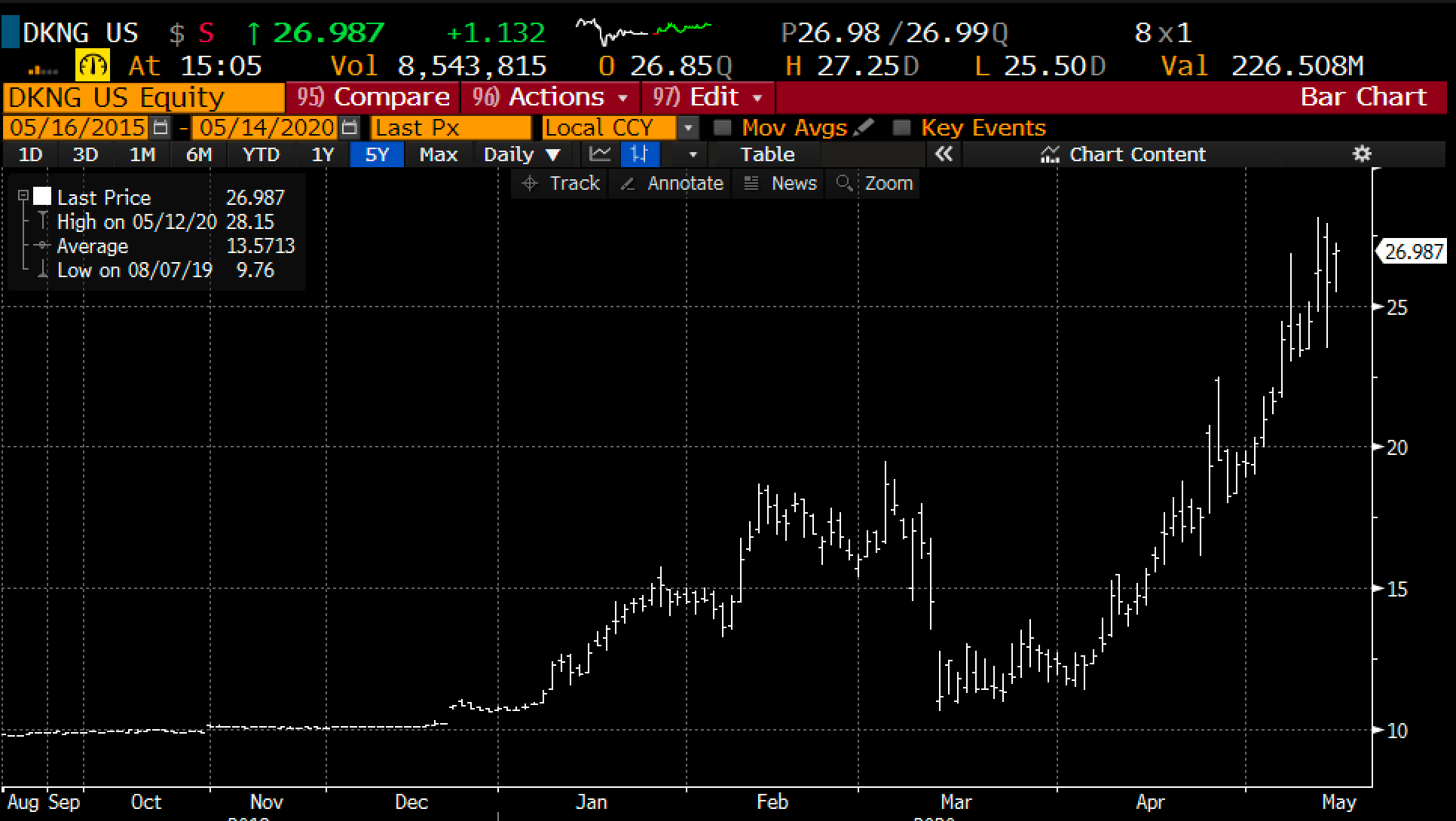 Despite a hefty valuation, trading 26x last year’s $323 million sales that came on on a $147 million operating loss, Barron’s Andrew Barry suggested scarcity in the public markets for plays on online gambling could help buoy demand fo the shares:

With casinos closed and sports betting moribund, online casino-style gambling is a bright spot for the industry. Internet gaming revenue (excluding sports wagers) in New Jersey rose 66% in March, to $65 million, the state reports. The Garden State is a leader in online gambling, which includes slots and table games like blackjack.

Last month on CNBC DKNG CEO Jason Robins discussed the challenges of the lack of traditional sports on their business and the new ways they are staying engaged with their customers:

This will be one of these “special stories”, not easy to value, but the trade-off of the prospects of a newly deregulated industry that is being powered by technology with a massive global reach. Also a very interesting discussion about the potential for increased openness by states that still ban sports gambling. See data below from Axios on sports betting.

Five analysts cover the stock, all 5 have buy ratings, with Morgan Stanley, a banker on the deal, the largest of the firms.

Options recently started trading on the stock and as you can see call open interest today is more than 3x that of puts, which is also the case for total open interest 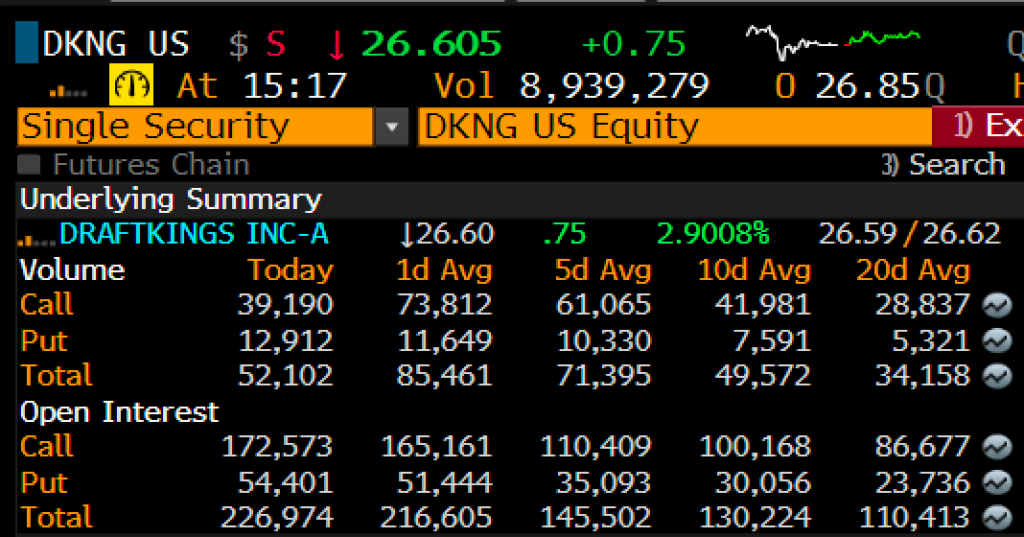 Short-dated options prices are through the roof as one might expect as demand for calls have been obvious as the stock has been rising precipitously of late. 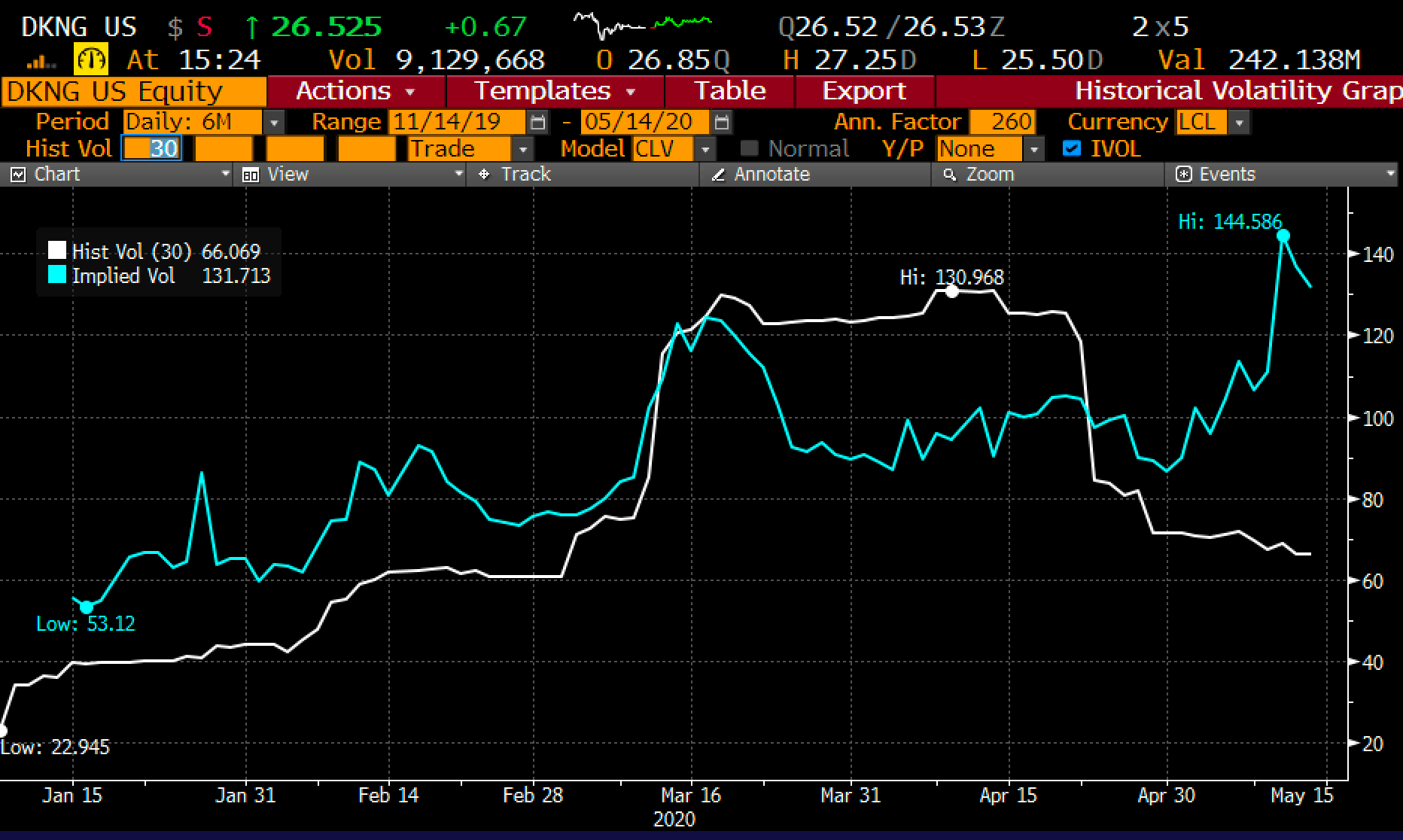 Just to give you a sense of how expensive options are, with the stock at $26, the June 30 calls are $2.50 bid. That is $4 or 15% away, with the premium nearly 10% of the stock price. If you bought that you would need a $6.50, or 25% rally in a little more than a month to make money. Which begs the question, if you were long the stock, why not sell that call and overwrite your long position?

I don’t have a trade here, but as a new listed issue thought makes sense to keep an eye on it as we get closer to baseball and hopefully basketball coming back online in the near future… prior to that this stock could be a buy on any significant downside volatility.

Two years ago today, the Supreme Court struck down the Professional and Amateur Sports Protection Act (PASPA), which had prevented states from creating their own sports betting regulations.

Where things stand: 24 months later, 18 states and counting have legalized it, launching an explosive new industry that touches sports, media, technology and more (though the pandemic has slowed growth in what was set to be a big year).

What they’re saying: Most states allow casinos to operate freely, taxing them as they would any business. But a handful run their casinos at the state level under a revenue-sharing model, which Dustin Gouker of Legal Sports Report tells me is a shortsighted strategy:

“The states with more open markets (N.J., Pennsylvania, Indiana) have outperformed those without them (Oregon, Rhode Island). It’s too early to make calls beyond a shadow of a doubt, but both Oregon and Rhode Island would clearly be doing better if they took less money with an open system.”

The bottom line: So much has changed in just two years, but in reality, it’s only just begun.