Cisco Systems (CSCO) will report its fiscal Q3 earnings today after the close. The options market is implying about a 7.5% tomorrow, which is just a tad higher than the average one-day post-earnings move over the last four quarters. It is worth noting that the stock has declined the day after the last three prints (5.23%, 7.33% & 8.61%) and during that period, the stock is down about 26% from its 52-week and more then ten-year highs made last July: 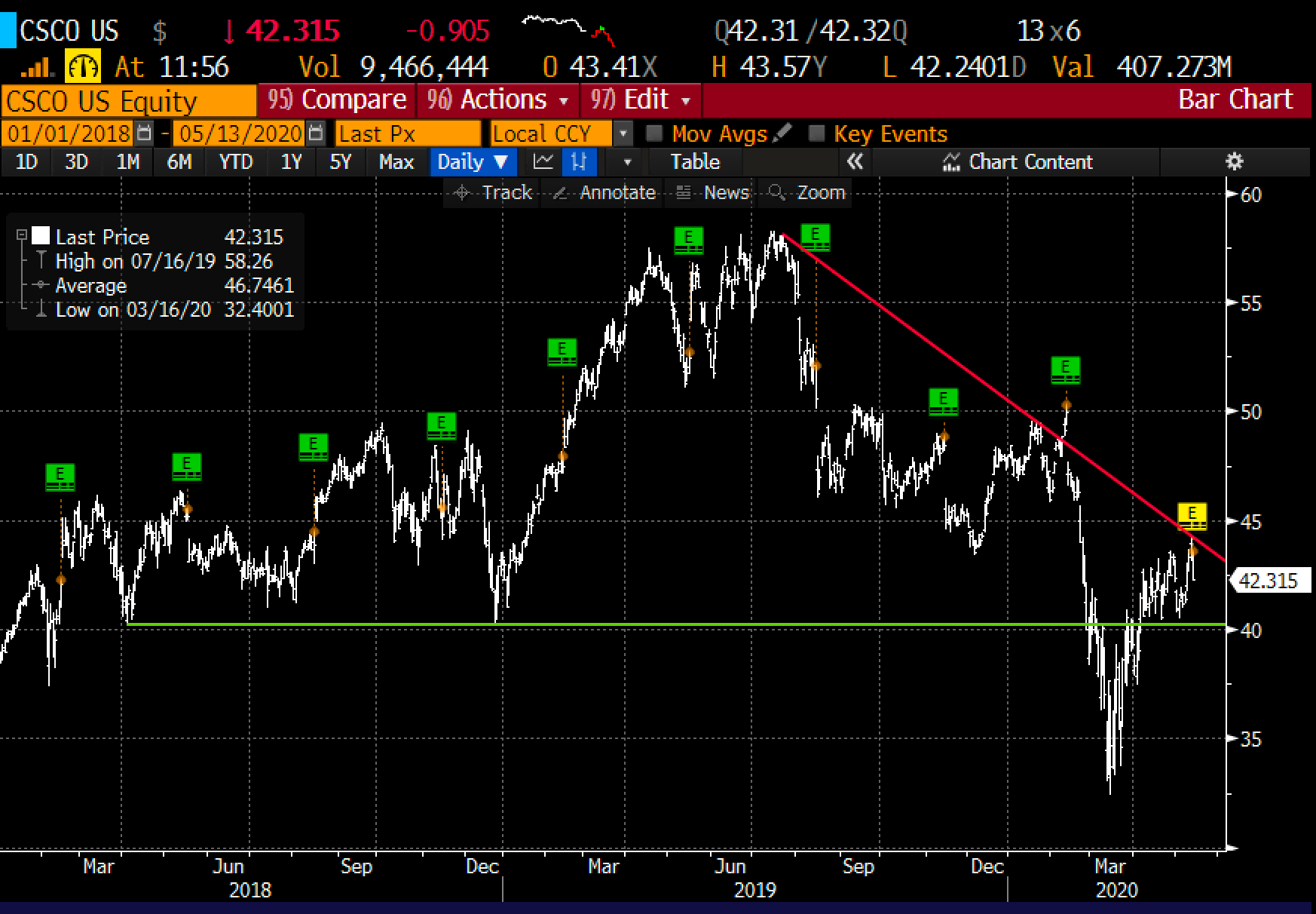 Shares of CSCO are down 11.5% on the year, underperforming the Nasdaq which is flat on the year and down a little less than the S&P 500’s (SPX) nearly 13% year to date decline.

Despite the stock’s fairly cheap valuation at 14x 2020 and 2021 estimates (which are most certainly a moving target but today’s guidance should help shed some light on this) Wall Street analysts remain fairly mixed on the stock with 16 Buy ratings, 13 Holds and 2 Sells.

Barron’s Online Tech Editor frames expectations for forward guidance as the “balance between a boost in demand for home networking and cloud-computing gear against softness in enterprise spending”. He goes on to highlight some analyst expectations:

Muller says he expects near-term sales declines in the company’s corporate-campus-network business “as we expect the macro uncertainty will have companies exercise caution with spending plans.” But he also contends that Cisco “could benefit (relatively speaking) if the caution drives customers to the tried-and-tested offerings of Cisco, which can offer a full suite of networking solutions.” Muller maintains his Outperform rating and $47 price target.

Evercore ISI analyst Amit Daryanani on Monday is maintaining his Outperform rating and $50 target, but trims his estimates based on cautious recent comments from rivals Juniper (JNPR) and Arista Networks (ANET) on both supply constraints and incremental softness in enterprise spending. “Despite near term challenges, we think there are tailwinds driven by the shift to remote working such as increased spend on networking to expand capacity plus increased demand for security and collaboration solutions,” he writes. “We remain positive on Cisco stock as we think the company is well-positioned to navigate through the current downturn.”

Barclays analyst Tim Long likewise maintains an Overweight rating and $48 target on Cisco, but notes that his estimates for the current quarter are far below consensus at $11.4 billion and 63 cents a share. “Our recent estimate revisions have largely been in view of the increasingly severe disruption to enterprise activity related to Covid-19,” Long writes. “However, we see some drivers which may partially offset Covid-19 headwinds. These include recent management commentary around firms extending physical appliances to the work-from-home (WFH) environment, indications that firms including Barclays itself have been investing in upgrading their Cisco plant to facilitate expanded connectivity requirements, and pre-existing product refresh cycles…that should be supportive for Cisco longer-term and provide some offset to near-term macro pressures as well.”

So what’s the trade? Short-dated options prices are down considerably from March highs but remain very elevated and are not likely to go too much lower in the current environment with 30 day at the money implied volatility near 40%, making the challenge of expressing long premium, short-dated directional views challenging: 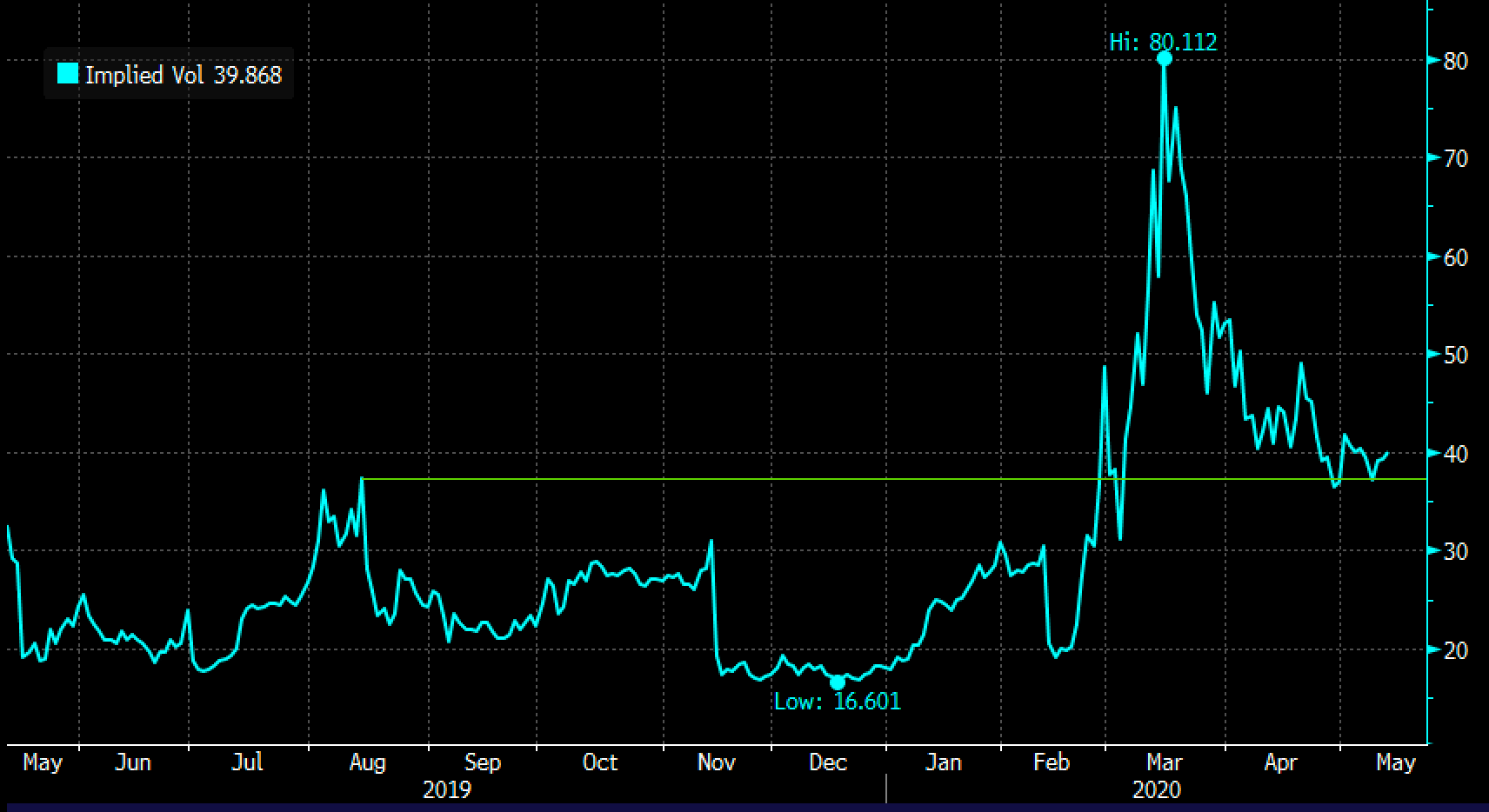 If I were inclined to play for a breakdown below support at $40 I might consider the following trade idea:

Rationale: this trade idea risks 2.4% of the stock price over the next month, with a break-even down 7%, in line with the one day implied move tomorrow.

The ideal scenario is that CSCO is near $45 on June expiation, if below the short call will expire worthless and you will be left long the Sept 45 call for only $1.30 as opposed to the $2.30 it costs now. If the stock is at or above the 45 strike than the short call can be covered if you want to stay long the Sept 45 call. The idea of the trade idea is chip away at the longer-dated premium and set up for a rally later in the year.