Yesterday in this space I highlighted a WSJ story that suggested:

Sadly this is a reality that our elected leaders are going to have to come to grips with very soon as the financial assistance in the form of payroll protection loans/grants will run out this summer, which was meant to incentivize employers not to fire their workers through the recently imposed lockdowns. I am hard-pressed to think that reopening our economy will not go nearly as smoothly in the most populous areas (which are also those hardest hit by the number of cases and deaths) as those buying the stock market at current levels seem to think.

Last night on CNBC’s Fast Money we had on hedge funder Mike Novogratz who made the point that disposable income in the U.S. will be higher this year than last year because of all the stimulus for recently laid-off workers who are getting paid more than they would be as a result of increased unemployment benefit, which he also mentioned will run out on July 31st:

The bottom is in for stocks, says hedge fund legend Michael @novogratz. He gives us his take on the market, the economy’s reopening and his quarantine ‘stache. pic.twitter.com/kWp9wV99pP

This would only be positive if you believe that unemployment was going to miraculously go back to the low single-digit, pre-pandemic levels. And as I have detailed here over the last few weeks, the pandemic economy, like most economic crises hit our most vulnerable and low-end earners first, in the service sector, then make their way into manufacturing and then into white-collar jobs. I suspect it will be very similar to this time. Think about how detrimental it is to consumer spending when we start working our way up the chain of wage unemployment. 33 million Americans have filed for unemployment benefits in just the last 2 months, I suspect consumer behavior will be adversely affected for the foreseeable future and the added $600 a week supplement from the government, that for now, due to shutdowns can only really be used for staples, online purchases, and rent/mortgage might not serve as the sort of stimulus that is hoped for as the economy reopens if people don’t have jobs to go back to.

And it sounds like the corporate layoffs are just getting started, this morning Boeing’s CEO suggested the in an interview on NBC’s Today Show that “it’s probable that a major carrier will go out of business as the Covid-19 pandemic keeps passengers off planes, per Bloomberg:

The recovery is going to be slow, with air traffic languishing at depressed levels for months “Something will happen when September comes around,” Calhoun added, referring to the month when the U.S. government’s payroll aid to the airline industry expires. “Traffic levels will not be back to 100%. They won’t even be back to 25%. Maybe by the end of the year we approach 50%. So there will definitely be adjustments that have to be made on the part of the airlines.”

The WSJ over the weekend compiled a list of job cuts that are already in the works by U.S. industrial and transportation companies that have been hard hit by the pandemic: 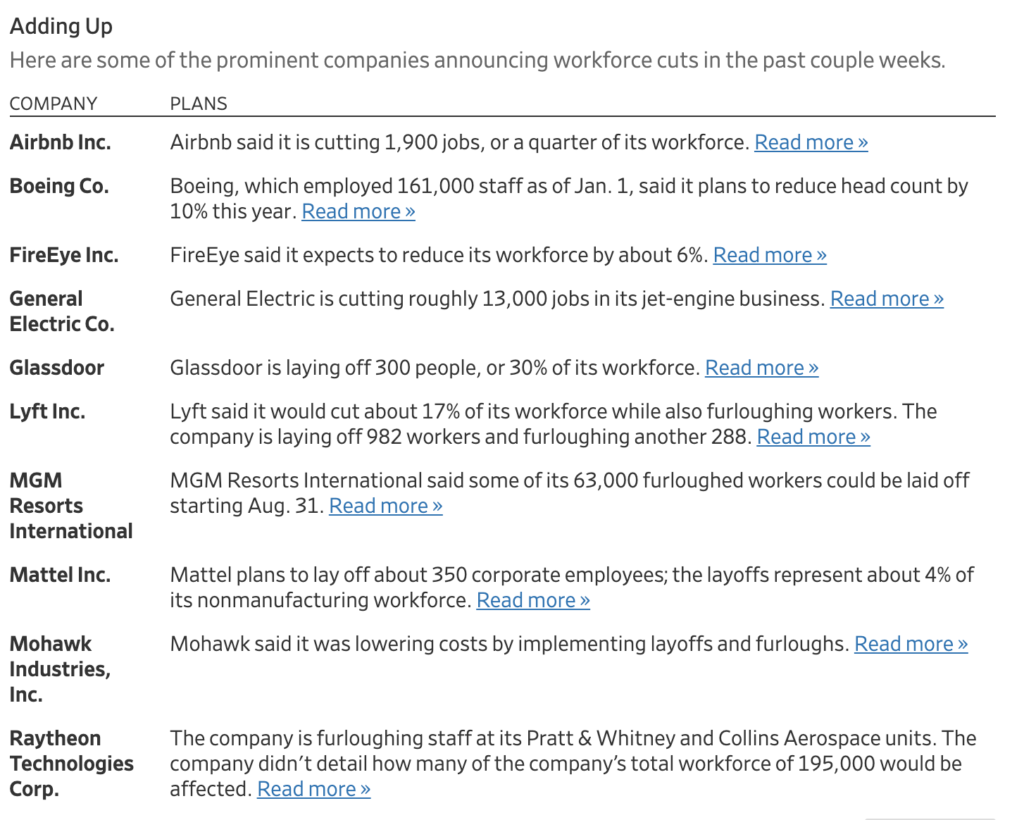 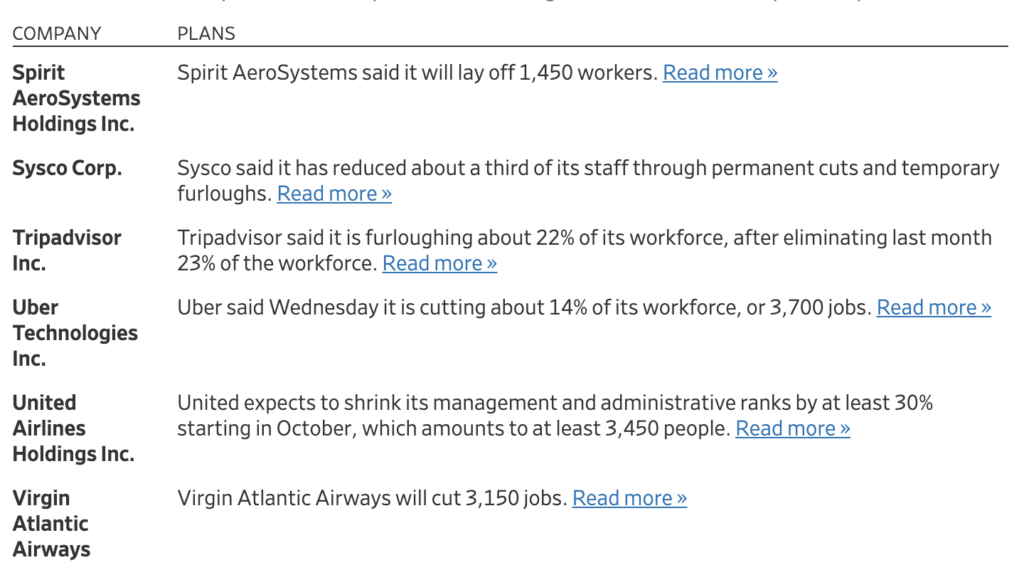 Why the routine focus on Jobs? Simple, the stock market is not telling the full story, as I mentioned last week in this space, it’s Very Different This Time…

So what’s different this time to the last recession and bear market? Well if you are a regular reader you know my answer, the size and speed of the financial assistance, and of course the jawboning of more to come if needed. The highs in the Unemployment rate in this crisis are likely to be front-end loaded, as is the case with the stimulus/assistance. In the Great Recession unemployment topped out nearly two years after the stock’s markets topped in Nov 2007:

I have updated the chart to include the April data: 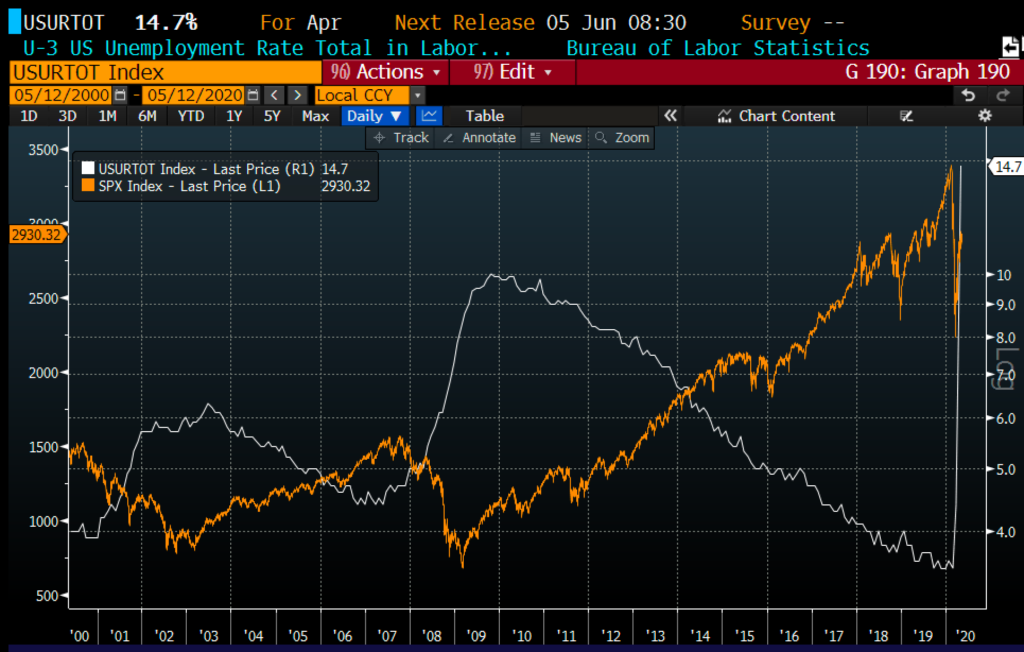 All this weirdo chart shows is that IF the stock market did bottom in March, then it did so just 5 weeks into the worst economic shock in a century and the worst health crisis in decades, if not a century, and just a month or two before the unemployment rate will top it. This all seems very unlikely to me as I suspect we will have waves of corporate layoffs in the second half of the year and unemployment rate once it tops out north of 20% this summer/fall, it will stay at high single digits or possibly low double digits for some time serving as a dead weight on the neck of our economy that is accustomed to consumers driving the GDP train.

I don’t offer these views with any glee, and I could be very wrong (I hope I am), but to be frank, I am past the implications of the stock market (its a mug’s game, its MSFT, AAPL, GOOGL & AMZN, and the FED, that’s really all it is at the moment), investors need to open their eyes to the economic reality of this unforeseen shock and consider the risks of the most optimistic scenarios not playing out near term because that is what the stock market is currently pricing.

My mission with Risk Reversal is not to highlight all the things that can go right, I’ll leave that to all of the cheerleader bobbleheads, you know the ones that have convinced you that if you are not a perma-bull on the stock market than you in some way are not a patriot, that it is un-American, that you are betting against our fine way of life. This is what keeps me up at night, that every bailout gets bigger in size, and the impact is lessening, and the eventual reckoning will make the Great Financial Crisis look like a walk in the park.