Last week shares of Uber (UBER) rallied 15% on its (and its major ride-share competitor in the U.S., LYFT’s) Q1 “earnings” which I guess were not as bad as investors expected. I am not sure what investors were cheering as the company posted a gap net income loss of nearly $3 billion, nearly 3x its loss from Q1 2019 and on a sequential basis from Q4 2019. This loss came on an 18% year over year rise in sales, but down 13% sequentially.

Investors were hopeful that the worst was over for the pandemic related crash in demand for UBER rides in March and April and thankful for the previous concerning food delivery service, per Barron’s:

CEO Dara Khosrowshahi said that ride bookings were down 80% in April, but have begun to recover, with week-over-week gains in each of the last four weeks. In the last week, bookings were up 12% in the U.S., with 14% growth in New York and 12% in San Francisco, and more substantial gains in markets that have begun reopening, including George and Texas.

Khosrowshahi said total bookings were down 40% in April, with weakness in the rides segment offset by strength in its Uber Eats business. He said the company saw 89% growth in Eats in April, and that the business had crossed an annual bookings run rate of $25 billion.

RBC Capital Research analyst Mark Mahaney who rates the stock a buy with a $52 price target was constructive on the stock coming out of the print: 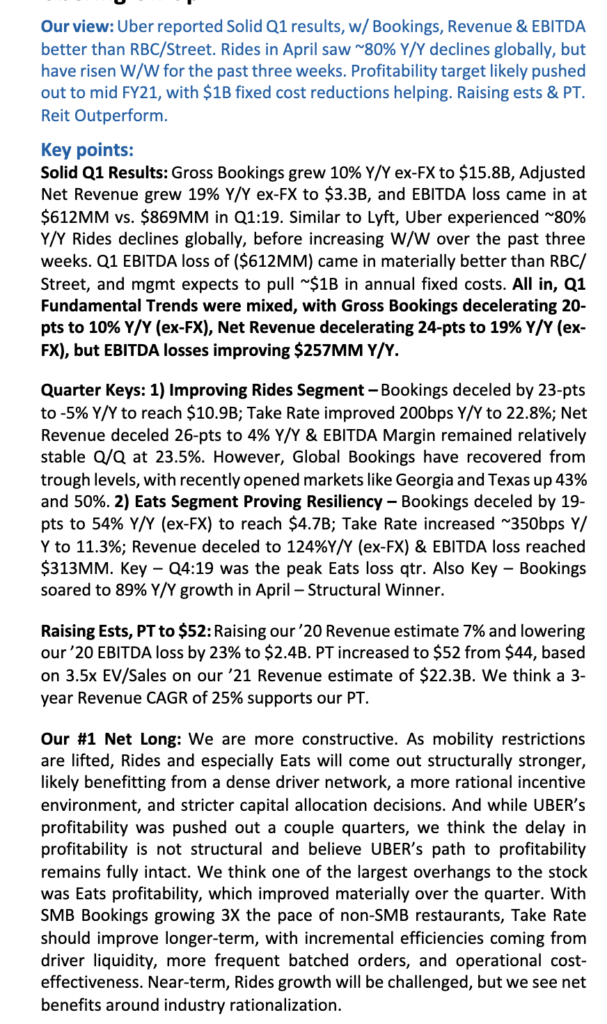 Despite the massive losses and uncertainty about the revenue environment, Wall Street analyst remain fairly Bullish with 31 Buy ratings, 7 Holds and only 1 Sell.

For the time being, UBER appears to be in a bit of a trading range with technical support dating back to the fall in the mid $20s and resistance in the mid $30s: 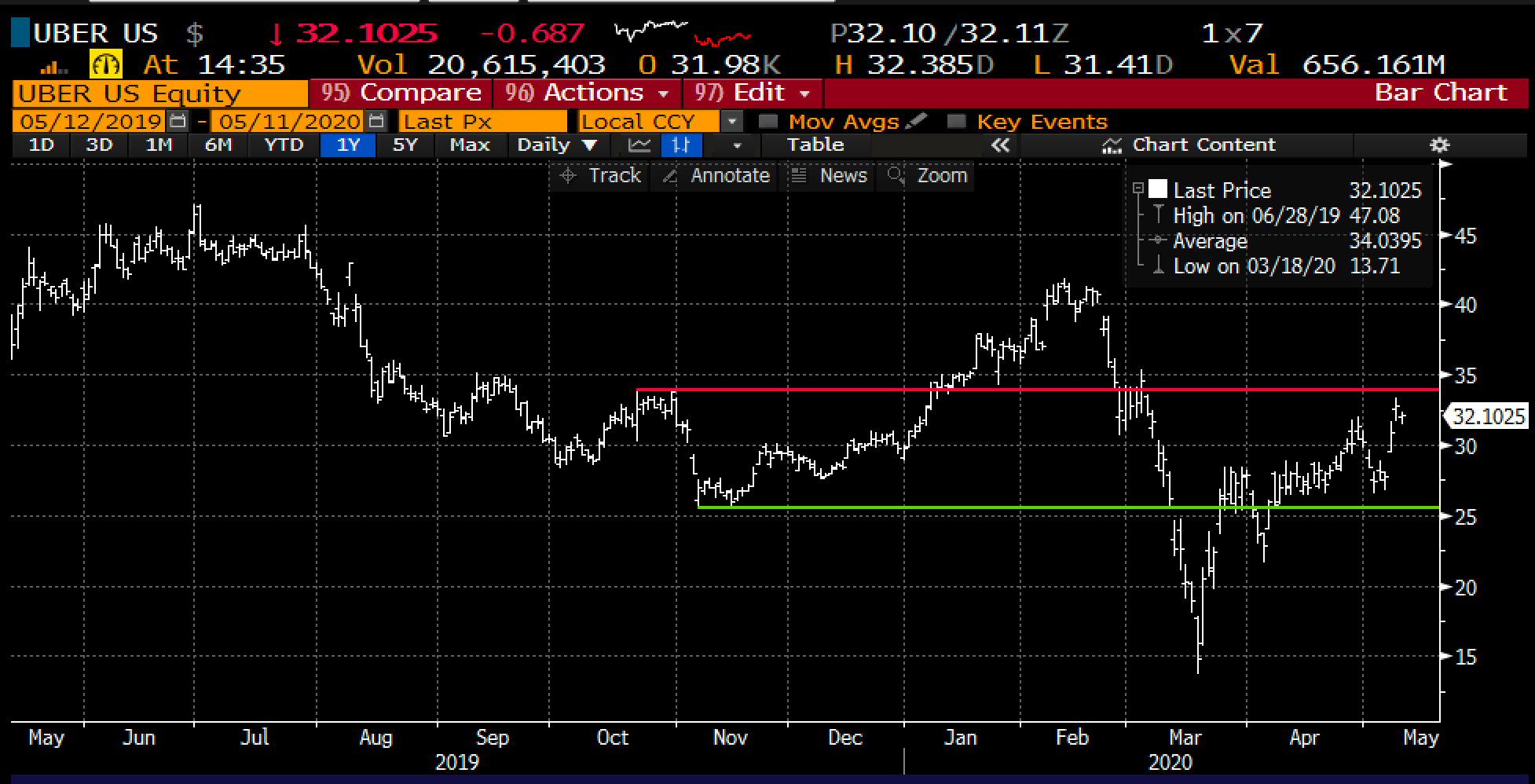 It is worth noting that the stock’s weakness might have something to do with the commentary from Autonation (AN) CEO Mike Jackson on their Q1 call this morning, per Bloomberg:

Jackson said consumers’ desire to travel again and do so in their own personal space is driving the industry’s rebound from the coronavirus pandemic.

“There’s a drumbeat around personal safety and personal space — this is what customers are telling us as they come to look at vehicles,” Jackson, 71, said by phone. “They’re planning to drive on their next vacation, and they want personal space. There’s obviously pent-up demand.”

That’s good news for AN whose GAAP eps are expected to drop 40% in 2020 on a 19% decline in sales. Maybe the worst of their issues are over, which was their inability to sell cars, with the pandemic possibly shifting the perceived secular shift of the last few years away from rideshare and back towards car ownership as consumers have less of an appetite before a virus vaccine to be in strangers cars or on public transportation.

Autonation’s commentary is clearly a welcomed bit of news of how consumers may behave as the economy starts to reopen… while it could be an issue of pent up demand, I suspect corroborating commentary from others in auto ecosystem could help make this hard-hit group investable.

On the flip side though, UBER’s recent strength appears to be based on a whole heck of a lot of hope, that their losses have topped and ride demand has bottomed. I am a bit more skeptical of this as I think consumers will continue to be very careful about who and how they interact with others as the virus is still spreading.

SO what’s the trade? If I was of the mindset that the recent strength in the market was a buy the rumor of the economy re-opening, which turns into a sell the news, and I was inclined to play for a pullback in UBER back towards support in the mid $20s I might consider a put spread in June… for instance…

Rationale: this trade idea is already 20 cents in the money, the options market is suggesting there is a 33% chance the trade is break-even on June expiration and a 16% chance it is at $25.