Disney (DIS) reports its fiscal Q2 earnings today after the close. The options market is implying about a 7% one day move tomorrow which is double the average over the last four quarters. With the stock just above $102, the May 8th weekly 102 straddle (the call premium + the put premium) is offered at $7, if you bought that and thus the implied movement you would need a rally above $109 or a decline below $95 to make money. Alternatively, if you had conviction that the stock would move one way or the other inline with the average over the last four quarters, the at the money put or call is equal to that average and is one way to express a defined risk directional view. As regular readers know I am not a fan of very short-dated long premium directional trades into events like earnings, you need to get a lot of things right to not lose money, first and foremost direction, the magnitude of movement and of course timing.

Shares of DIS are down 30% on the year, and down 34% from its all-time high made in late November. At its lows, in March the stock was down nearly 50%, but has rallied 30% from those levels. The stock was just rejected at technical resistance in and around $110 and is now flirting with the uptrend from the March lows: 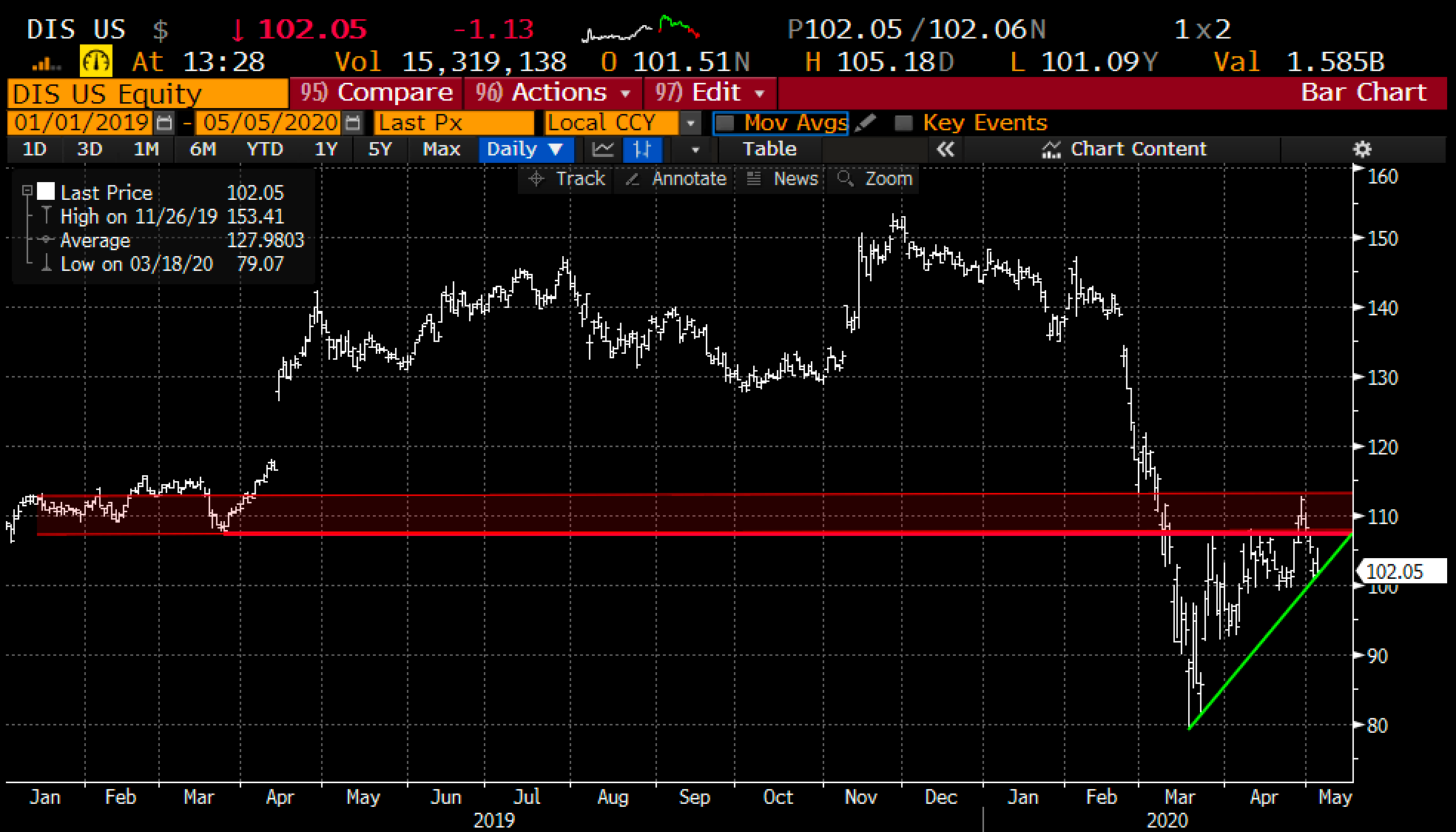 May the Fourth be with you… and Disney… who may need it after dropping over 2% today on a downgrade at Moffett Nathanson. $DIS pic.twitter.com/TTrkWqztzz

Here is Nathanson’s rationale for the downgrade to Neutral:

For more than a decade, we have been stalwart believers in the factors that make Disney different than the rest of the media pack. The company’s leadership, strategic positioning, asset mix and brand equity have consistently delivered for their investors. We are downgrading Disney to Neutral, not because we have lost faith in those attributes, but rather because we believe there are a number of risks that could lead this unprecedented event to have a longer impact, with earnings revisions massively skewed to the downside.

While Disney has the advantaged assets to win in this new world, we fear that the uncertainty of the present situation creates significant and unrivaled earnings risk for the foreseeable future. The economic impact of social distancing is obviously most severe for the two divisions (Theme Parks and Studio Entertainment) that have driven free cash flow in the recent term. In addition, the acceleration in cord-cutting, coupled with ESPN’s high fixed cost base, could further negatively impact Media Networks. On the brighter side, Hulu and Disney+ should be gaining strength from this crisis, but do not contribute free cash flow to offset the erosion elsewhere

I suspect it would take a meaningfully outsized downgrade to forward guidance to have the stock down much more than the 7% implied move tomorrow, but I suspect they do NOT guide for the balance of the year given the lack of visibility, but they probably could if they were to throw the towel in on parks, hotels, cruises, theaters, ESPN (given no sports for the time being) etc… But the company will likely give out guidance on a need to know basis and at this point, the stock’s underperformance to the broad market suggests investors are well aware of the company’s near-term headwinds.

The ideal scenario is that DIS stock is near 110 on May expiration and the short 110 call expires worthless or can be covered for a small amount and you are left long Sept 110 call for $5 or about 5% of the stock price.

The max risk of the trade is $5 on a sharp move lower than current levels or a sharp move above the $110 strike price by May expiration.

Rationale: this trade idea risks about 5% of the stock price and allows to leg into some upside exposure over the coming months. To my eye, $110 appears to be technical resistance, also inline with the implied move. I would look to continue to whittle away at Sept if the stock were to remain rangebound.

On the downside, If I thought the company was to miss and guide below what investors are currently bracing for, I might consider a put butterfly spread in May targeting a move back towards $90s… for instance:

Rationale: this trade idea risks 1.7% of the stock price and offers a wide range of profitability to the downside with a break-even down 3.7% or half of the implied move.