Tomorrow morning before the open Dominion Energy (D), the $63 billion market cap Utility that pays a dividend that yields 5% and trades at 17x expected 2020 eps growth of 3% and 16x expected 2021 eps growth of 6% will report its Q1 earnings. The options market is implying about a $5 or 6.5% move this week, which is very rich to the less than 1% average one-day post-earnings move over the last four quarters.

Dominion’s earnings call and guidance might be one of the more interesting things that happens this week in the stock market when trying to figure out the impact of the lockdowns in the U.S. and how the reopening of businesses might go in the near future as many densely populated office environments, theaters, stadiums might not need nearly the amount of energy pre-pandemic. A friend of mine who is in commercial real estate in Boston highlighted this point to me last week and it makes a lot of sense to keep an eye on.

Dominion is the second-largest holding in the XLU (the ETF that tracks the group) at 8%. Back on March 25th when the XLU was trading near $47 I detailed the following bullish idea:

A week later on April 1st (no joke) when the XLU was trading $56.50 (just above its current levels) I updated the trade idea with the inclination to take the quick profit on such a sharp short term move:

If the stock market is pricing in a deep but short recession with the S&P 500 (SPX) down only 13% on the year and 16% from its all-time highs in February, then the chance of longer recession would likely weigh on groups like utilities that are considered defensive but have come across a headwind that is usually only shortlived and regional and generally associated with natural disasters.

In late March my upside target was towards the prior technical breakdown level near $60, which it got too, briefly exceeded by has since be rejected: 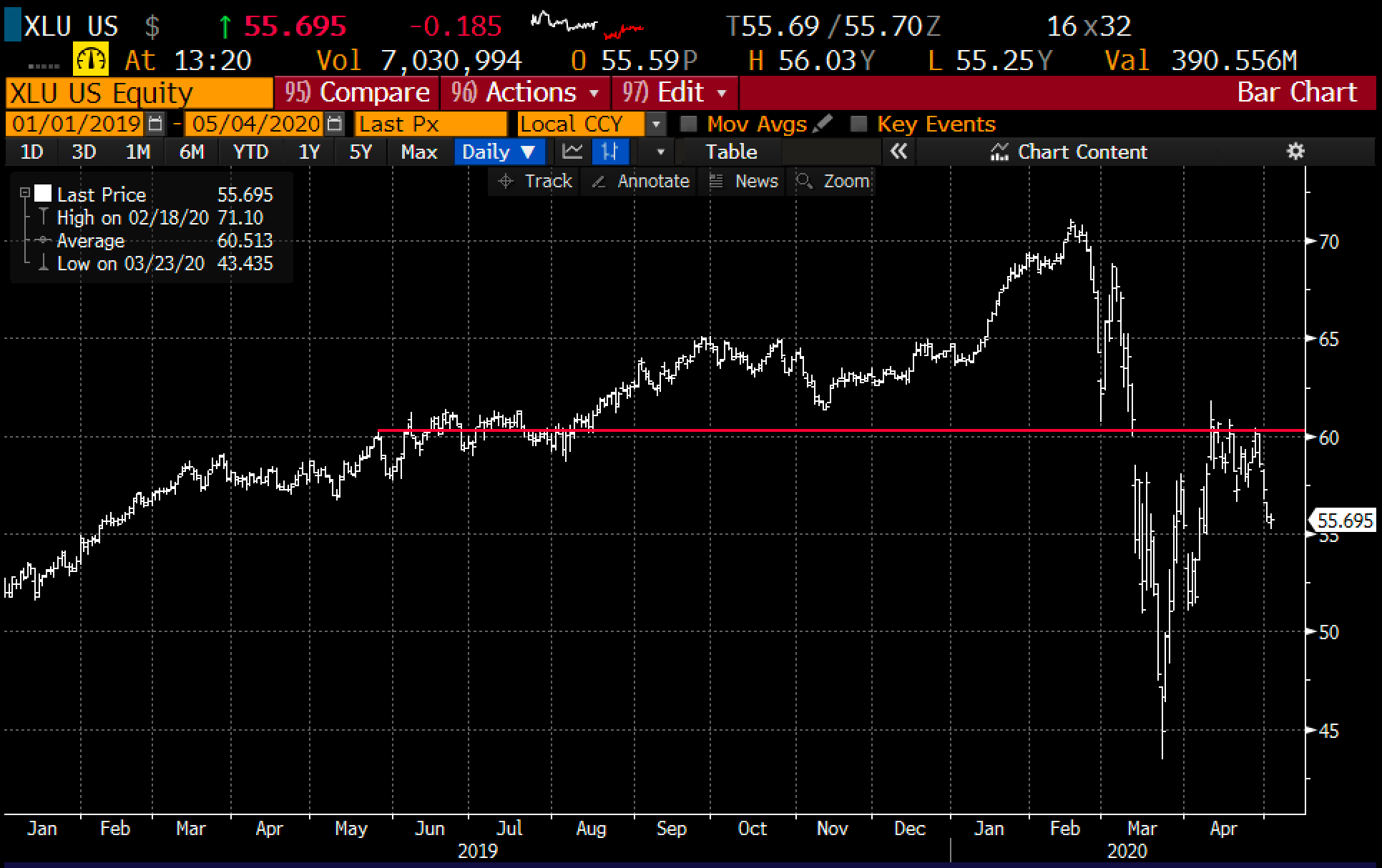 At this point, it might make sense to play for a move back towards $50 in the coming weeks as the market might have priced in a better than expected reopening of our economy, at least in the near-term.

Rationale: this trade idea risks 2.2% of the etf price, breaks even down 3.5% and has a profit potential of 3x he premium at risk if the XLU is down 10% in nearly 6 weeks. The options market places about a 35% chance this trade idea is break-even  and about a 22% chance it is at max profit on June expiration.