In Q1 of this year, the mouthpiece of our Federal government was in total denial, at least to its citizenry that our country would be faced with one of the most severe health and economic challenges of the last century… in the days/weeks to come. With the testing of less than 2% of our population for the virus, we have nearly one-third of the confirmed 3.3 million cases globally and 60,000 Americans have died in the last two months from the Virus (yet less than 4% of the world’s population). The efforts to contain and mitigate the spread have caused the forced closure of our economy and way of life with 30 million Americans filing for unemployment benefits in the last month while Q1 GDP dropped 4.8%. For now the human toll in terms of those infected and deaths has not reached the administration’s worst-case given on March 31 (since downgraded), the week that many feel our elected leaders in Washington finally got serious about the contagion after waffling on tactics to mitigate the spread for weeks in March.

April come she will… well as confirmed cases and deaths spiked, so did the S&P 500 (SPX) registering its biggest monthly gain in 33 years, up 12.7% in April, placing the index down 14% from its all-time highs in February and down just 10% on the year. Mission Accomplished! 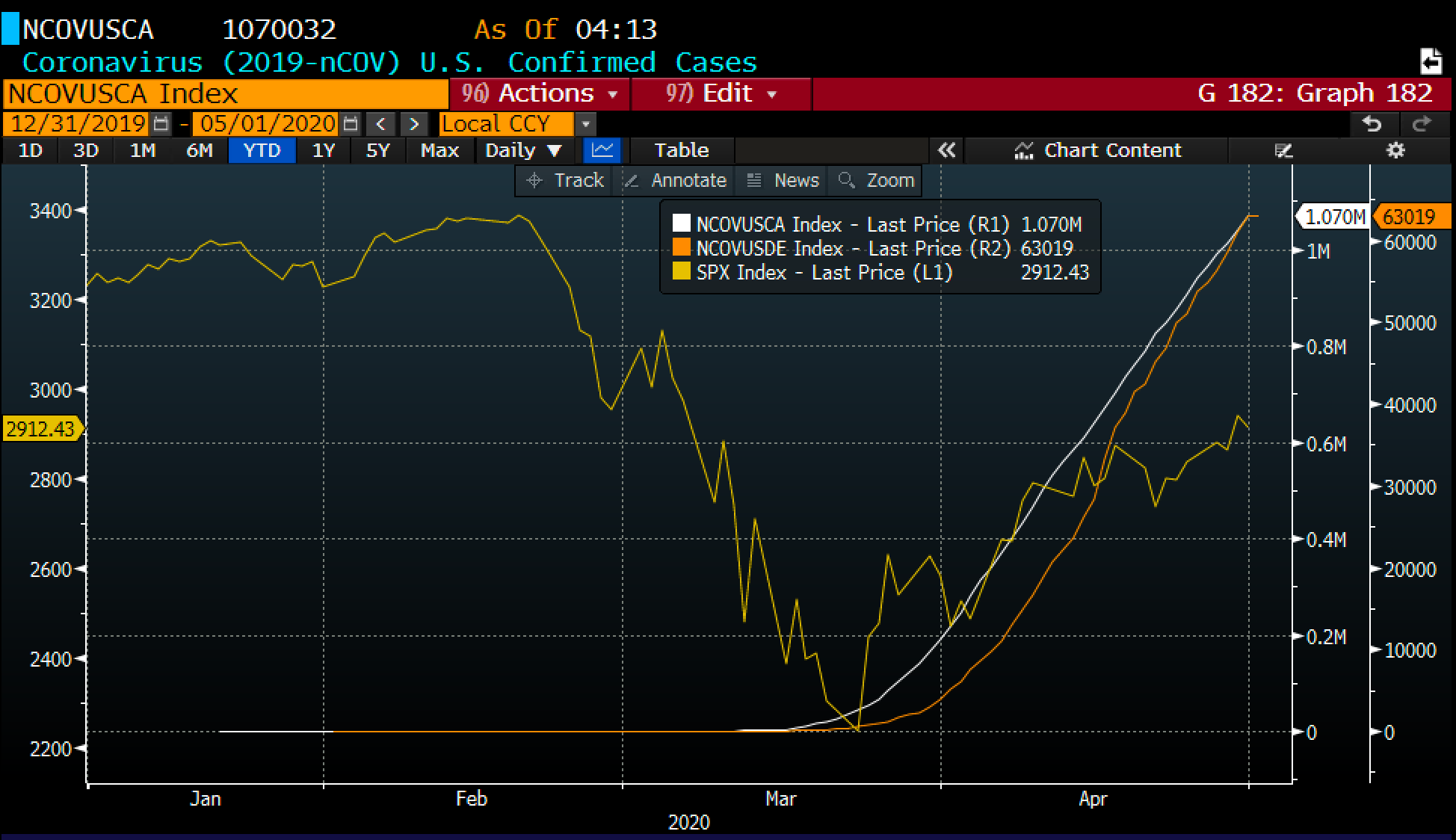 If the price action in the stock market doesn’t make a lot of sense to you, here is @NorthmanTrader highlighting where we are year over year:

It’s like nothing’s changed in the past year.. pic.twitter.com/xXWEgOm9t6

Obviously Sven would have used a sarcasm font when writing that tweet if it were available, but most bulls would argue the biggest change is that interest rates are at zero and staying there, and the Fed and the Treasury have injected trillions into the capital markets and the economy, and it is just starting to work its way through the system… so don’t fight the Fed.

I think it is safe to say that the SPX, where it was a year ago, despite the financial/economic disaster avoidance efforts, only down 10% on the year does not adequately discount the risk of the pandemic sticking around longer than we hope, causing rolling economic disruptions and sadly causing unemployment to stay elevated, despite the likelihood for it to come down dramatically from levels we print early this month as the lockdowns/quarantines ease. But for those who think that the easing of shelter at home restrictions magically causes the economy to get back to its January levels, think again, disruption will be the new normal. Jonathan Last for The Bulwark last week wrote a piece that has summed up my point of view fairly succinctly about the impending reopen in a piece called We Cannot “Reopen” America, not suggesting that we should NOT reopen America, but merely that reopening will not necessarily translate into an “if you build it they will come”. And most importantly, businesses/industries that survive in a post-pandemic world are likely to be altered for some time to come, at least in the way they deliver their products and services and importantly how they interact with their customers. They will have also learned how to make do with fewer employees, at far less populated workspace relying a great deal more on productivity tech. Amazon CEO Jeff Bezos reminded us last night, that even for the best-positioned companies for this new economic reality, there will be extensive costs, per The Verge:

Many of the changes have been put in place already and came in response to pressure over treatment of workers during the pandemic. Amazon is under fire for its handling of employees who have publicly criticized working conditions; it fired six tech employees who took a sick day in protest of Amazon’s treatment of workers, and there has been backlash against the company for reportedly using a heat map to track Whole Foods stores that are at risk of unionizing.

Bezos’ note tries to make Amazon sound serious about “keeping employees safe,” telling shareholders to “take a seat” while the company ramps up this spending. “The best investment we can make is in the safety and well-being of our hundreds of thousands of employees,” Bezos writes.

I would also add that the consensus post-pandemic economic outlook from what I can tell does little to include the ratcheting up of tensions with China, an apparent about-face of the supposed grand trade deal made with China in January. trump’s musings regarding retaliation on China for the coronavirus, which could include more tariffs or even the unthinkable of defaulting on our debts to China could lead to a massive bilateral conflict on more than just the trade front.

While many are hopeful that far quicker than normal advances for drugs to treat those afflicted with the virus, testing, contact tracing and ultimately a vaccine (and general better preparedness of our healthcare system to deal with shocks) help sentiment towards a back to a not so different economic normal in the not so distant future, there are still some who want to dampen those expectations.

In a Bloomberg Opinion piece yesterday, former president of the Federal Reserve Bank of Minneapolis, Narayana Kocherlakota, argued that Maybe the Pandemic Will Never End… Policy makers should be planning for a worst-case scenario:

This disease has the potential to impose enormous and lasting change upon the world. Scientists are doing all they can to prevent such an outcome, by defeating the virus quickly. But economic and public-health policy makers should be planning for the possibility that they won’t succeed.

Yesterday Center for Infectious Disease Research and Policy (CIDRAP) issued a report on COVID-19 where they layout the ground rules for their analysis: We will address timely issues with straight talk and clarity (sounds refreshing). And the steps we will recommend will be based on our current reality and the best available data. The report COVID-19: The CIDRAP Viewpoint lays out the following three scenarios for the virus: 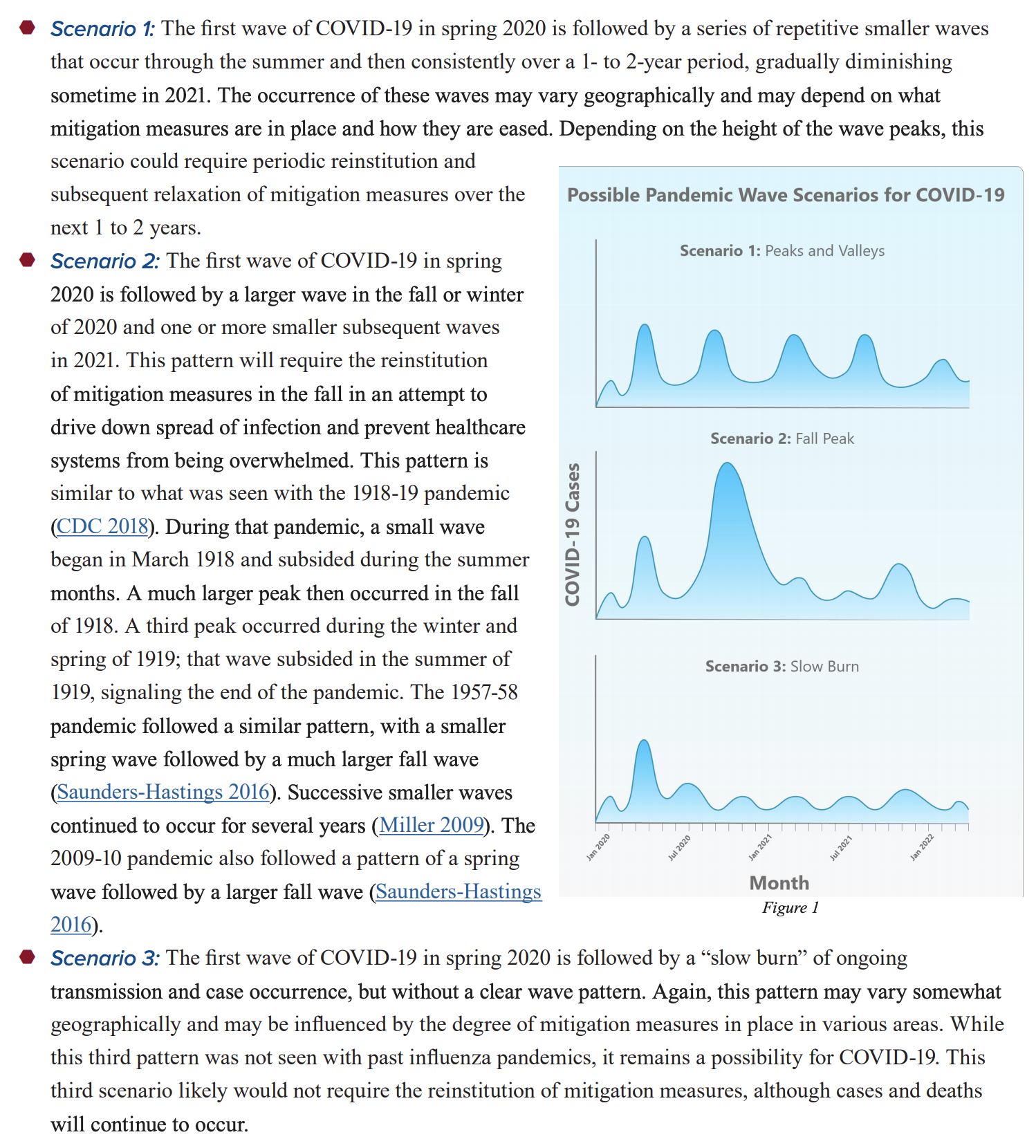 None of these outcomes suggest that once we come out from lockdown that the virus will just go away and I would add that the pressures on our economy will be a thing of the past. Here are the key recommendations from the report (emphasis mine):

States, territories, and tribal health authorities should plan for the worst-case scenario (which involves a large second peak of cases in the fall of 2020), including no vaccine availability or herd immunity.

Government officials should develop concrete plans, including triggers for reinstituting mitigation measures, for dealing with disease peaks when they occur.

Risk communication messaging from government officials should incorporate the concept that this pandemic will not be over soon and that people need to be prepared for possible periodic resurgences of disease over the next 2 years.

At the moment it does not appear that the messaging from the White House incorporates any of these findings, despite sounding very consistent with what Dr. Fauci, the non-partisan director of the National Institute of Allergy and Infectious Diseases since 1984 has been attempting to relay to the American people without aggravating the president.

The stock market as I have said on numerous occasions of late does not appear to be pricing in anything other than the simple fact that the Fed and the Treasury will merely continue to print, buy or jawbone anything that they need to keep the economy and the financial markets afloat. I am fine when it comes to saving the economy and fixing the plumbing our capital markets, but less so on buoying the stock market (it’s a mug’s game) and I think the focus on the potential adverse effects on the stock market by the White House back in Q1 is one of the reasons we were so poorly prepared to combat the health crisis that led to a recession and eventually caused a market crash.

Sven’s SPX chart highlighting April 30, 2019, high to April 2020 high nearly to the penny is astounding… to my eye next stop on the downside is 2720 which was an important support level in early March, that when breached saw the Index drop 20% in a straight line over the next two weeks: 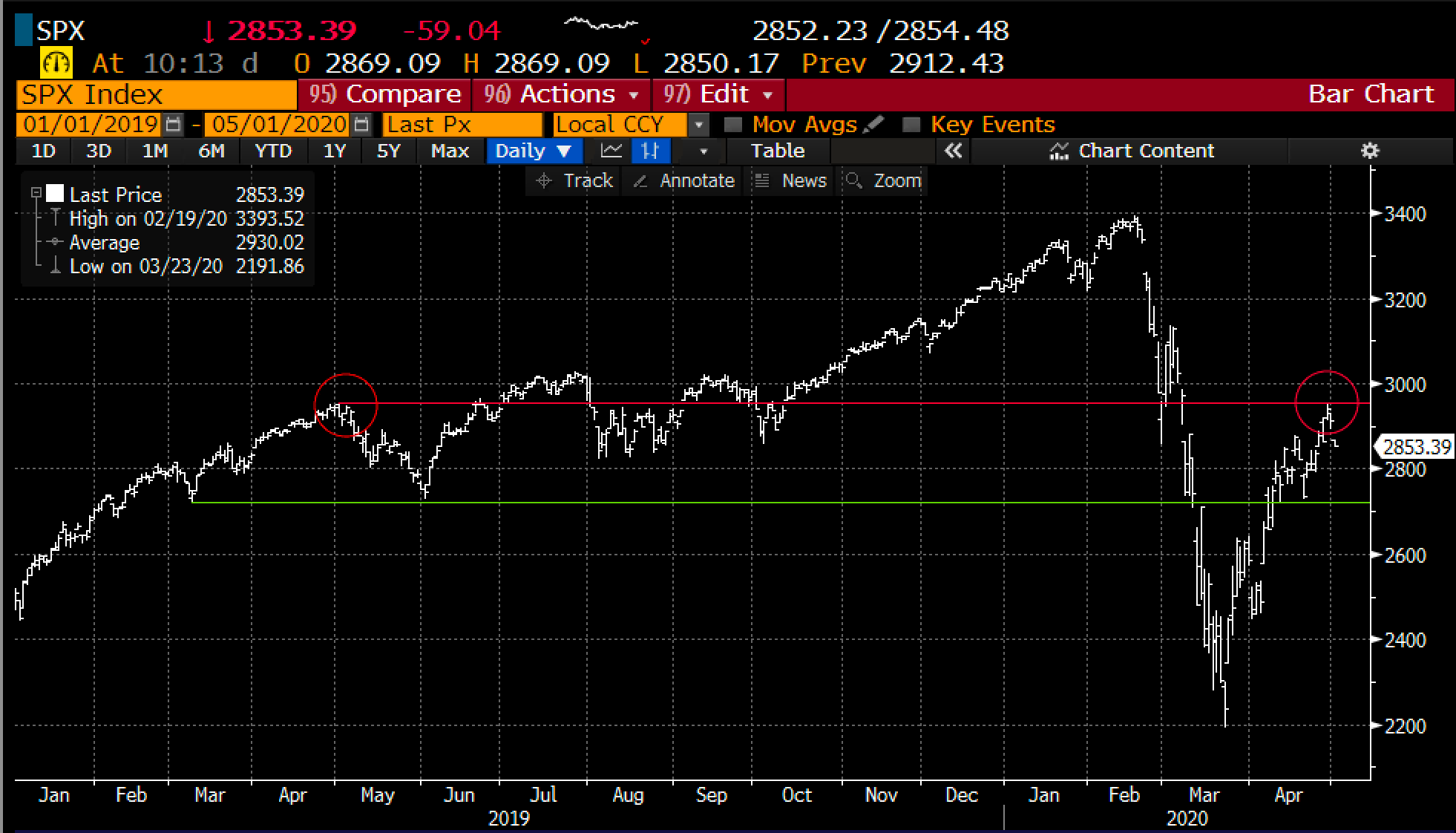 So the question this weekend you might take some time to ponder is whether you want to believe, the health experts who are guided by science and data with a simple goal in mind, to protect the human population from adverse health outcomes, who are suggesting to prepare for the worst and hope for the best, or the market strategists and pundits owned by the Financial-Industrial Complex who can do little more than hope and prepare for the best for financial outcomes for the human population.