Today after the close Apple (AAPL) will report its fiscal Q2 earnings. The options market is implying about a $12.50 one day move tomorrow in either direction or about 4.3%, which is rich to the 2.8% average over the last four quarters but in line with the 10-year average one-day post-earnings move.

As I write, shares of AAPL are basically unchanged on the year, and down about 11% from its all-time highs made in late January.

The closing low on March 23rd comes right at the uptrend from early 2019 low, which should serve as near-term technical support around $235, while the prior all-time high near $327 should serve as technical resistance: 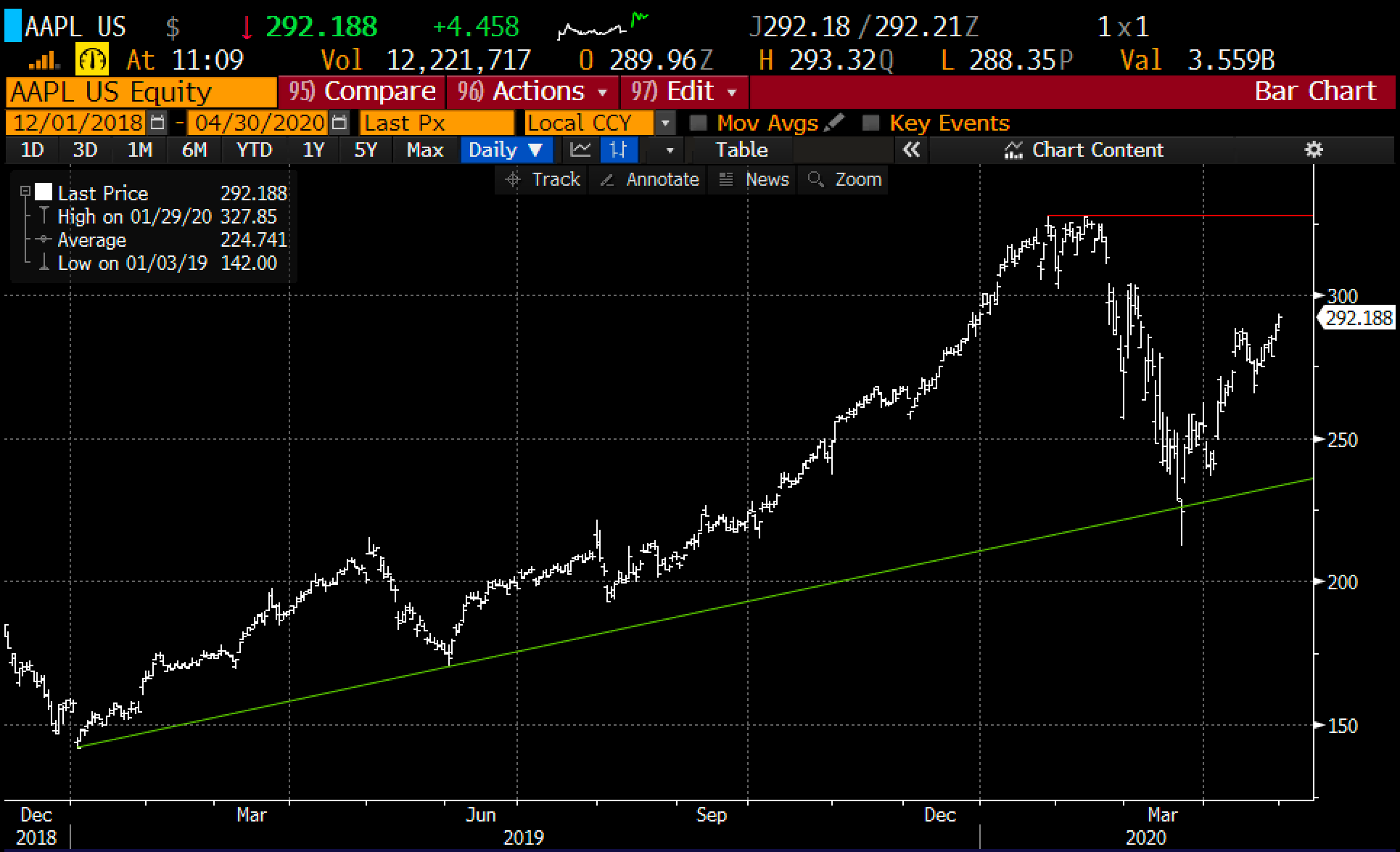 Back on March 23rd when AAPL was putting in that low, I wrote a post on the name (Are We There Yet?) and had the following to say:

Well, there are a few really important things to consider in the near-term about AAPL’s business. First things first, China, where all of their iPhones are made, and a good bit of their future growth is expected. AAPL’s nearly 40% sell-off from its highs in 2018 was largely predicated on fears of trump’s brewing trade war with China causing production disruption and weaker demand due tariffs in China, a region the company gets between 15 and 20-% of their total sales from. Prior to trump calling the coronavirus the “Chinese Virus” which many Chinese here and abroad find offensive because of the context in which it is used, AAPL was already losing smartphone marketshare in China to local OEMs to under 7% in Q1 2019, in 5th place.

The push to deglobalization that started in 2018 with trump’s trade war, and now the disruption to our manufacturing supply chains will dramatically accelerate and I would look for companies like AAPL to bear the brunt of consumer nationalism.

I would also add that a big part of last year’s 85% gain in the stock in a year where the company did not grow sales, earnings, gross margins or iPhone units and Services, the new new thing for them grew only in the high teens, was the concept, yep again that there would be an “upgrade supercycle” in the fall due to the rollout of new high-speed 5G phones. That is NOT happening this year, not only because AAPL won’t have the hardware due to manufacturing disruption, but I suspect wireless carriers have curtailed spending on the buildout of the networks and who the hell in this environment is going to be buying $1000 phones sooner than they need to so they can download Stranger Things from Netflix faster??

AAPL’s PE multiple nearly doubled last year from about 12 in January to about 23 in Sept, that in a year where EPS was flat, so purely in anticipation on what could happen in 2020. Well it ain’t happening in 2020, and while estimates have started to come down since the company pulled their fiscal q2 guidance in Feb, consensus estimates are still calling for 11% eps growth and 4% sales growth in fiscal 2020.

Not much has changed to my mind, aside from the stock rallying 37% from that day’s intra-day lows.

What’s interesting to me about sentiment towards AAPL, at least from the Wall Street analyst community is that they have had the lowest percentage of Buy ratings on the name in a long time (29 Buys, 11 Holds and 5 Sells), which is in stark contrast to the rest of the MAGA complex (MSFT 33 Buys, 4 Holds… AMZN 54 Buys, 4 Holds & 1 Sell, and GOOGL 41 Buys and 3 Holds).

On April 16th Goldman Sachs Internet analyst Rod Hall downgraded the stock to a SELL, lowered estimates and placed a $233 price target on the shares (stock was $286 at the time): 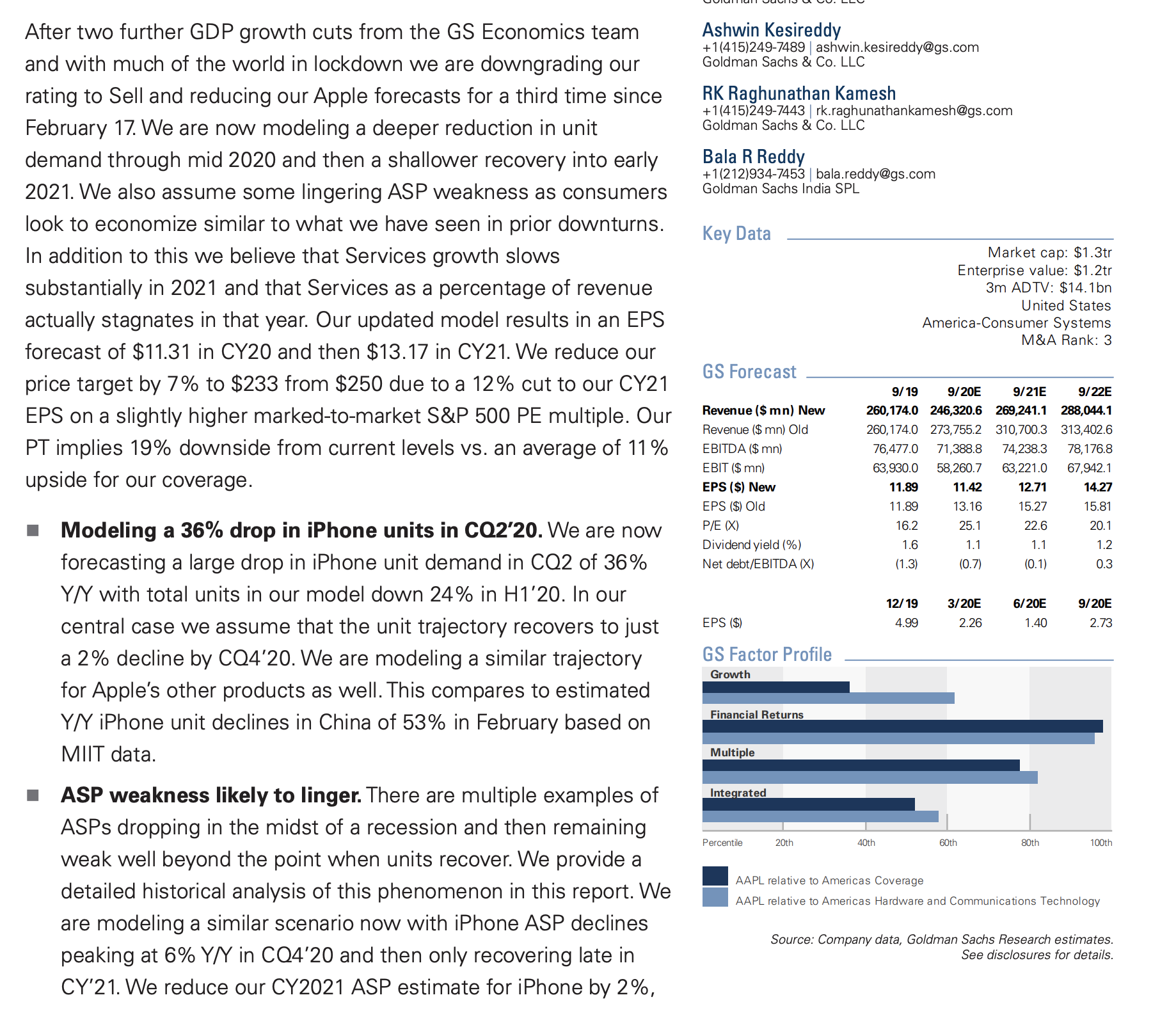 So what’s my take into the print? I am with Rod Hall, but the price action this week in the GOOGL, FB and MSFT after their earnings should make anyone wary of shorting this group. Investors had low expectations on forward guidance and have decided coming out the other side of earnings to be glass half full.

So what’s the trade?  Short-dated options prices in AAPL have come in a great deal with the market and the stock’s rise, now back to levels they normally get pre-earnings: 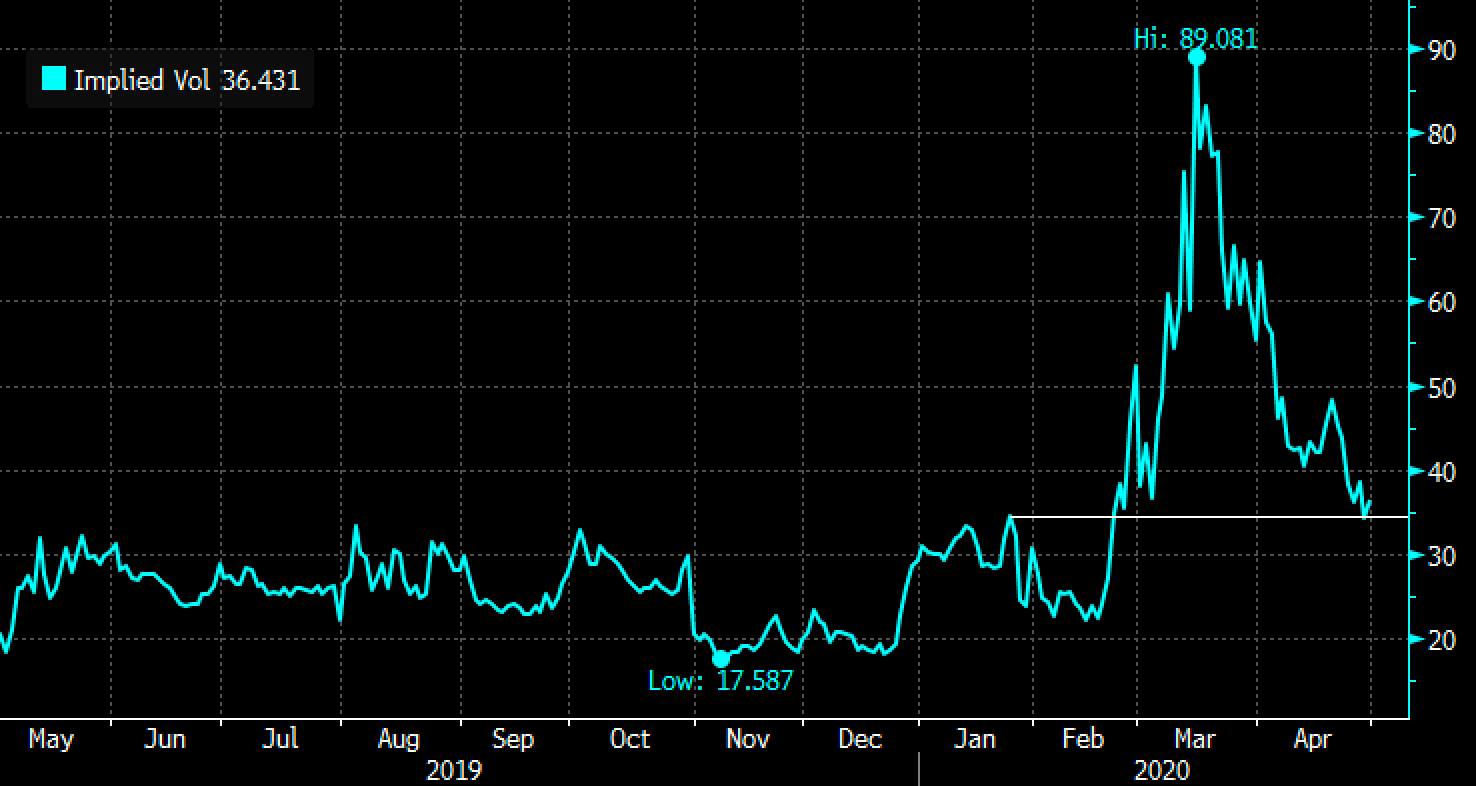 If the stock were about to take a leg lower, 30-day at the money implied volatility will end up looking cheap, but if the stock does not react much, or rallies a bit, you will see implied in the high 20s soon, making long premium directional trades challenged.

Yield Enhancement: If I were long the stock, not selling, but think the stock could be rangebound in the coming weeks, I might consider selling a call against my long stock to add some potential yield, for instance:

This strategy also makes a lot of sense for investors who place a good till cancel sell orders in stock they own above the markets, think of it as a way to get paid to put that order in. I wrote about this strategy last month (here)

Losses of the stock below current levels, but less the $6.50 in premium received for the call sale, which serves as a 2% buffer to the downside.

Hedge: if you are long and do NOT want to sell you stock, but are worried in the near term about a miss and guide lower and want to define your risk to the downside, but are willing to give up some potential upside to finance the hedge, then consider a collar, for instance:

Profits of the stock up to 310 (less the $1 it cost for the collar), capped above, the shareholder could always cover the short call to keep long position intact.

Losses down to 270 (plus the $1 it cost for the collar), protected below

Rationale: an investor would only do this if they were more concerned of suffering losses below vs capping their gains up at 310 between now and June expiration.

If you thought that the company has navigated this crisis well and they will be able to guide better than the street expects and the stock is on its way back to the prior highs, then consider a call spread:

BUT, if you think the guidance is ok, but the stock’s recent run caps near-term gains, but you want to finance longer-dated calls in the stock, consider call calendars, for instance:

if the stock is 305 or less than the short call will expire worthless and you  are left long the Sept 305 call for $13. The ideal scenario is that AAPL is just below 305, and the long Sept call will have picked up some deltas and you are left owning the call for $4 less than it cost today. The max risk of this trade is the premium spent, $13, or 4.5% of the stock price and would only be lost on a massive move below current levels or above the 305 strike.