Yesterday in my weekly In The Money segment with Fidelity Investments we discussed what I believe is a massive disconnect between the health and economic realities of the COVID-19 pandemic when viewed through the lens of Wall Street (unusually positive sentiment towards stocks), that appears to be devoid of what’s actually happening (and will be the ner norm) on Main Street for months, if not years to come. Click below to watch: 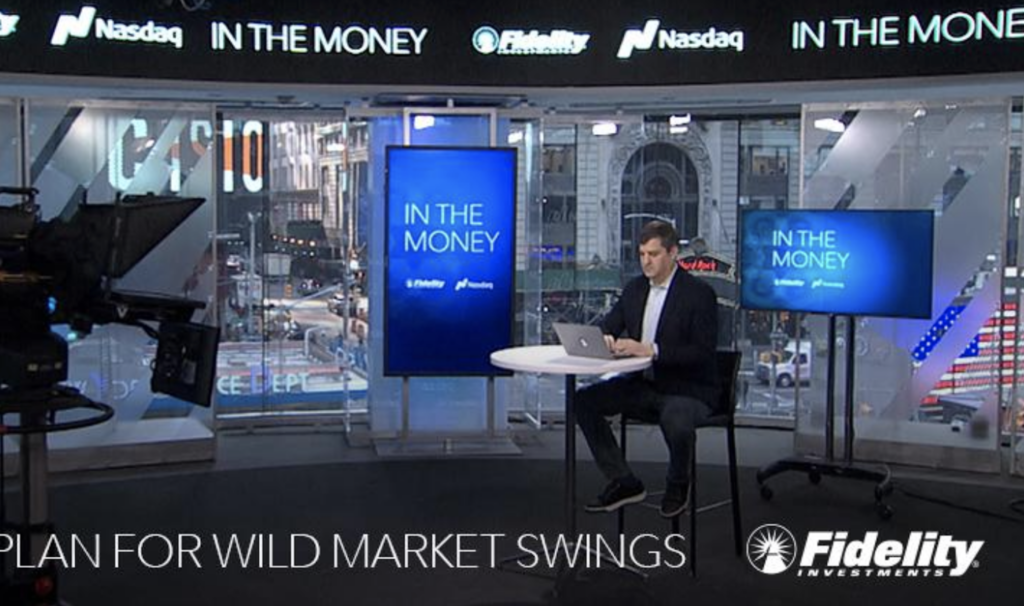 As we get into the meat of earnings season I detailed an overwriting strategy in shares of MSFT, a widely held stock that has outperformed the broad market, up nearly 10% on the year (when the stock was $173 at the time of taping yesterday morning). The idea here is that the stock’s outperformance likely incorporates a lot of any good news the company might point to in tonight’s earnings report. Long holders should consider selling 1 out of the money call per 100 shares of stock to take advantage of elevated options prices while adding potential yield in the near term. For instance:

This strategy also makes a lot of sense for investors who place a good till cancel sell orders in stock they own above the markets, think of it as a way to get paid to put that order in. I wrote about this strategy last month (here)

Losses of the stock below current levels, but less the $4.25 in premium received for the call sale, which serves as a 2.5% buffer to the downside.

I chose the 185 strike as that level, plus the premium received equals the all-time closing high on Feb 10th, near $189, where the stock might find sellers and serve as technical resistance: 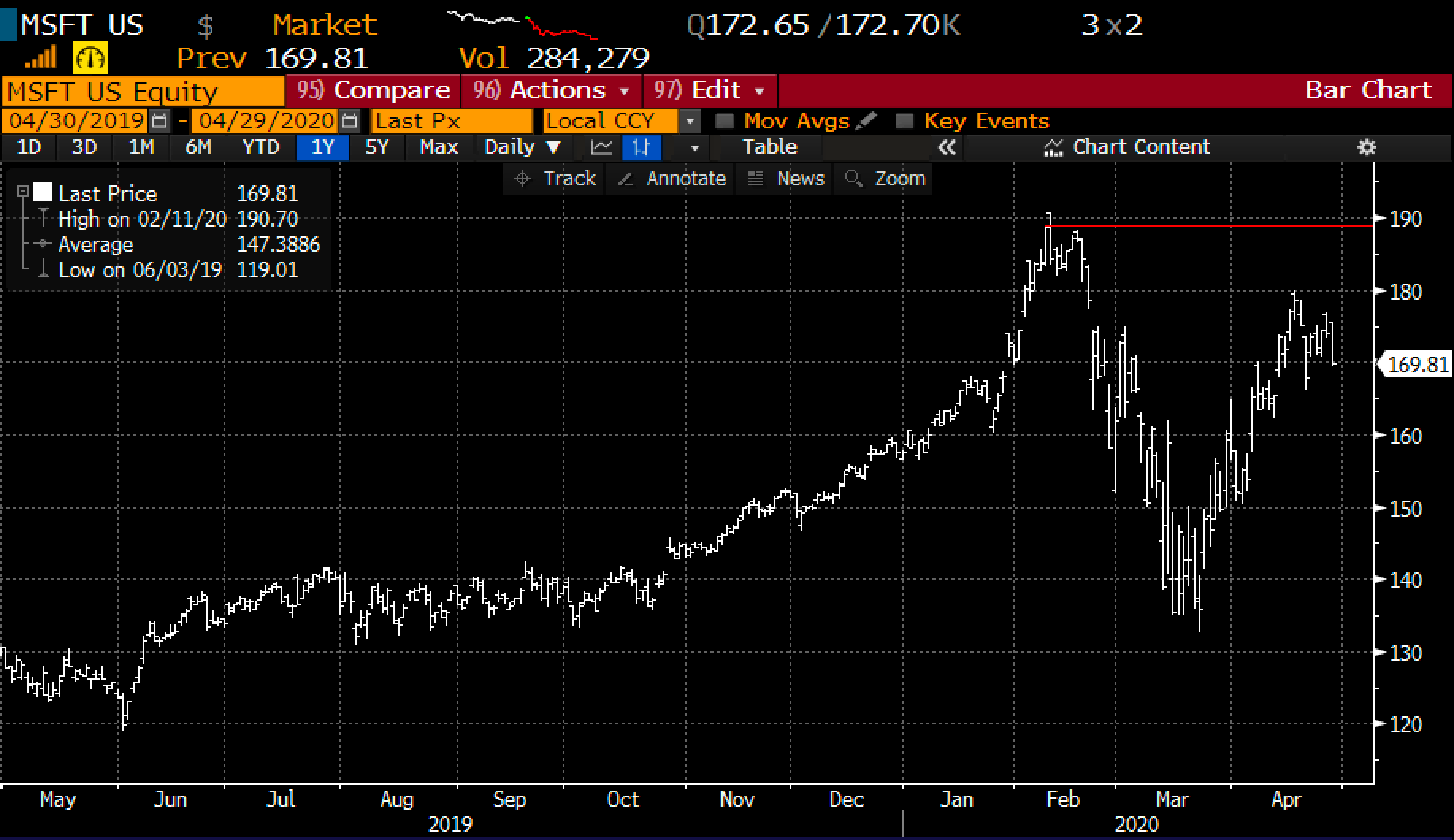 I also highlighted a trade idea in Slack (WORK) the workplace collaboration company that I have had a bullish outlook on (here) using a call calendar, an options strategy, like overwriting, that makes a lot of sense during earnings periods or just times when options premiums are elevated. The idea is to sell short-dated out of the money call premium to help finance longer-dated calls of the same strike.

Here was the trade idea from yesterday in WORK:

The ideal scenario is that WORK is near $30 on May expiation, if below the short call will expire worthless and you will be left long the Oct 30 call for only $3 as opposed to the $3.50 it costs now. If the stock is at or above the 30 strike than the short call can be covered if you want to stay long the Oct 30 call. The idea of the trade idea is chip away at the longer-dated premium and set up for a rally later in the year.

Why $30? Well past support, not resistance, gets trough there for any good reason and straight shot maybe back to the highs near $40: 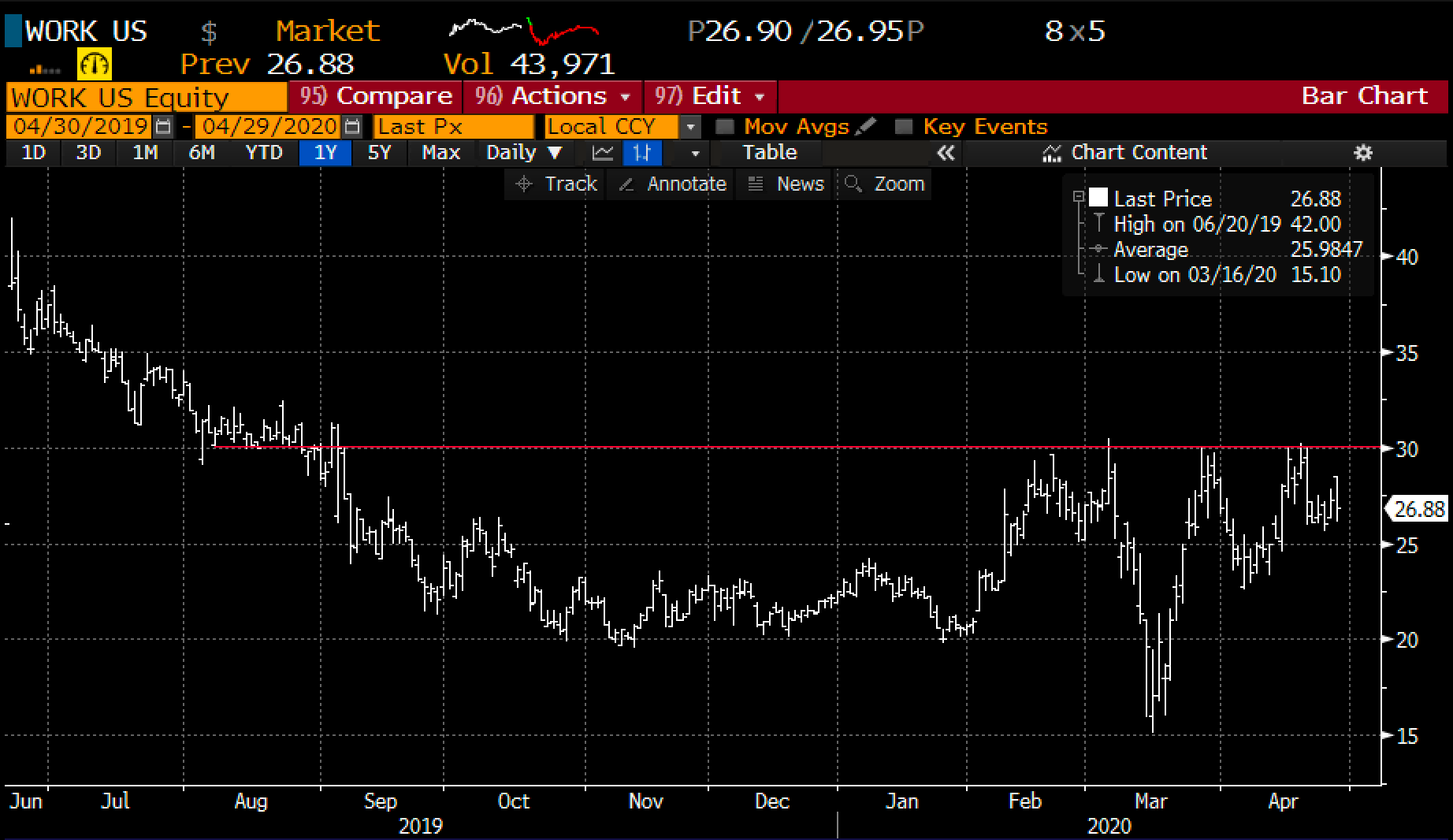 Lastly, I updated a trade idea from two weeks ago in the IWM, the etf that tracks the small-cap index, the Russell 2000, from April 16th:

As I said in the video, this was just wrong, the IWM has rallied nearly 10% and the trade idea is worth about half the original premium paid. At this point with break-even down at $110, which the options market says is about a 17% chance of happening by June expiration, it makes sense to cut losses and move on. As a general rule with long premium directional trades it makes sense to close when half the original cost is lost as the probability of the trade being worthless on expiration only increases with time. As we discussed in the video, my view on the IWM has not changed much aside from its price, and if I were still convicted that it will retest 100 in the coming weeks/months then I would look to roll the view up and out a bit to increase my odds of success, but I don’t at the moment want to waste good money after bad. I will revisit this one.