Netflix (NFLX) will report its Q1 earnings after the close. The options market is implying about a 12% move in either direction or about $53. With the stock at $435 the April 24th weekly 435 Straddle (the call premium + the put premium) is offered at $53, if you bought that and thus the implied weekly movement you would need a rally above $488 or a decline below $382 to make money by Friday’s close. NFLX has moved about 5% on average over the last four quarters.

Shares of NFLX are up 33% on the year, up 50% from its March lows, but interesting down at those levels the stock did not make a new 52-week low in March, and outperformed the market, down 25% from its February highs vs the S&P 500 (SPX) which was down 35% intraday on March 23rd: 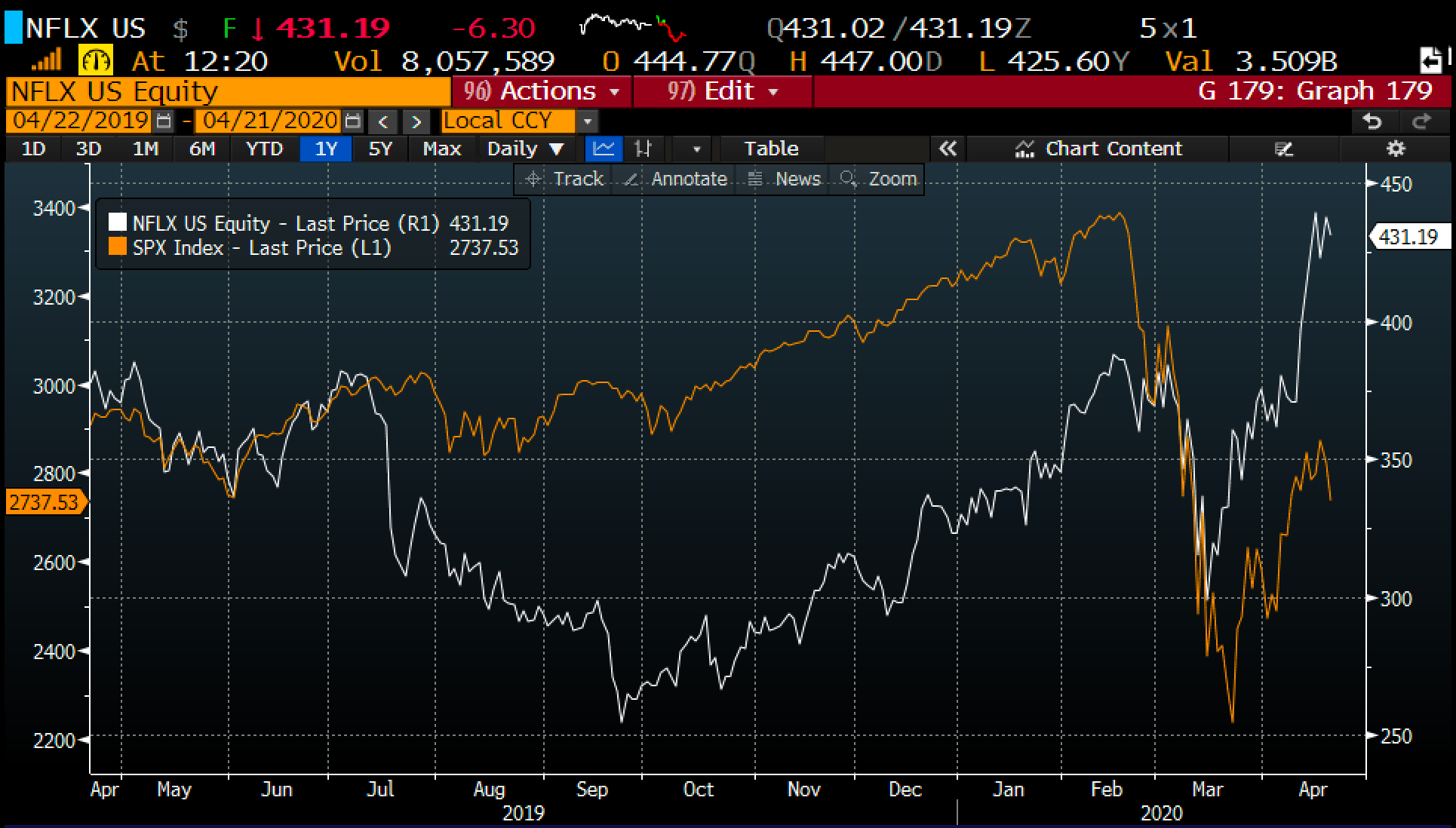 It is important to note that prior to the pandemic hitting our shores, shares of NFLX had been lagging some large-cap tech and media peers over the prior 12-month period as the competition and pricing pressures both on content costs and subscriptions were starting to weigh on subscriber growth. Well as soon as it became apparent that millions of Americans would follow the hundreds of billions globally who be sheltering in place for an unforeseen time in March, and this would likely be a huge boon for subscriber growth, the stock broke out of a two-year range: 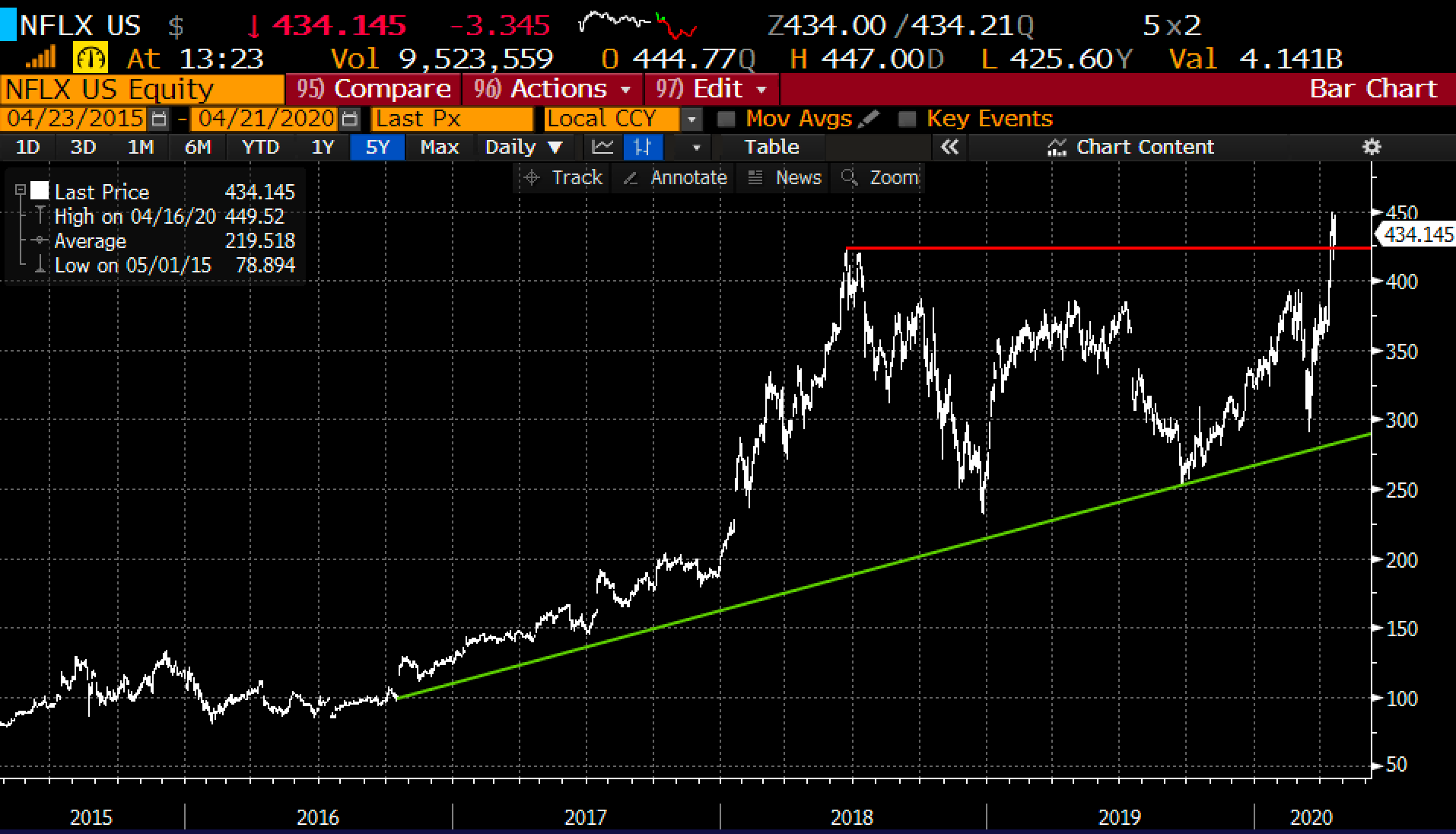 Heading into the print, expectations clearly high, and a beat has to be baked in here, no matter how big on the subscriber front. Guidance, if they give any will be key, will the near term surge in subscribers help to materially offset the negative free cash burn as a result if content costs? That has been a major pillar of the bear thesis, that has completion ramps, and the need for original content becomes more of an arms race, will investors continue to assign such large multiple premium to NFLX despite the negative free cash situation.

Unless it is an absolute blowout beat with a raise, something that few companies are willing or able to do in this environment (offer visibility) then I suspect the stock pulls back a bit below its breakout level between $430 & $400.

If I am long, want to hold on, but want to define my risk from here, consider collaring my stock…

Gains of the stock up to $500, if stock is above $500 on May expiration the investor could always cover the short call to keep the long position intact and suffer losses on the call.

Rationale: an investor would place a hedge on a stock in this situation if they did NOT want to sell the shares, but wanted to define their risk tot the downside for a period of time, while also have the ability to participate to the upside to a price. But most importantly, willing o limit potential upside in place of defined risk to the downside.

As we head into earnings season, I’ll offer my usual disclaimer for those looking to express directional views with options into events like earnings… YOU NEED TO GET A LOT OF THINGS RIGHT TO MERELY BREAK-EVEN, DIRECTION FIRST AND FOREMOST, MAGNITUDE OF THE MOVE, AND TIMING. This means you better have high conviction and you should always in these circumstances risk what you are willing to lose.