IBM will report its Q1 results today after the close. The options market is implying about a 7% one day move tomorrow which is rich to its 4 qtr average one-day post-earnings move.

Looking at the stock chart dating back to early January 2019 it would appear that prior technical support between $125 & $130 is now technical resistance, where the stock was rejected on the lower end last week: 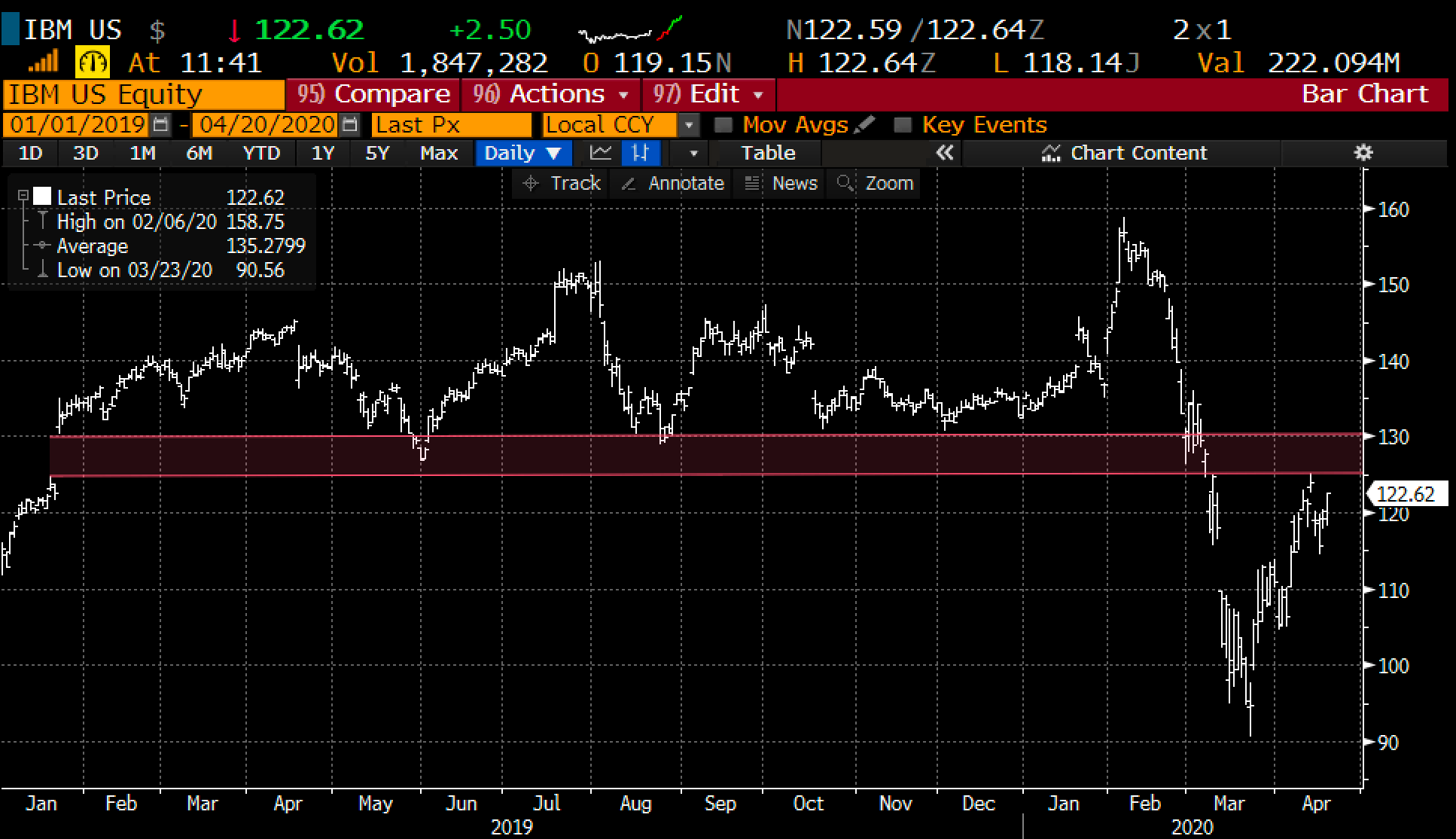 Wall Street analysts remain on the sidelines in the stock with only 6 Buy ratings, 13 Holds and 2 Sells with an average 12-month price target of $131.65. Consensus estimates are calling for the second consecutive high single-digit EPS decline, and low single-digit revenue decline for IBM in 2020, with the expectation that EPS increases 11% in 2021. This is all guesswork for the time being as Q2 is likely to be far worst than consensus, and the lower 2020 eps go, the greater the rebound will be when it comes.

Prior to the stock’s mid-February decline, it was making new highs on the heels of the company’s announcement that they were replacing their CEO with a 30-year veteran of the firm who has led the firm’s cloud efforts, Arvind Khrishna.

Back in November, Barron’s

Big Blue might have the best chance at transforming itself for the cloud era. To be sure, the company has been trying to find the right formula for years, with a more recent focus on artificial-intelligence platform Watson and “cognitive computing.” … The company’s latest effort relies on its $34 billion acquisition of Red Hat in June. IBM hopes the open-source software leader can help it gain ground in the cloud—the clear target is Google, the No. 3 public cloud player after AWS and Azure.

IBM’s enterprise computing knowhow gives the company some advantages. And the company has a successful history of reinvention. It has built and sold large businesses in desktop PCs, laptops, printers, disk drives, and semiconductors. Today, IBM’s vast workforce—more than 350,000—is mostly in services and information-technology consulting.

Colony thinks that IBM can nose past Google into the cloud-computing leadership tier.

This might be correct, but it was also written in November, the current state of the global economy is likely to make the clearing the decks process for the new CEO that much more difficult, I suspect any transformation of the business will have to come after the business is saved from the coronavirus induced global recession.

So what’s the trade? If you think that IBM is cheap at 10x earnings, despite the knowledge that it will see its multiple rise steadily on an expected decline in eps, that is if the stock were to hold its ground, but think they come out the other end of this in a good spot to start to better compete in parts of the cloud that their new CEO is prioritizing, then consider call spreads targeting the early Feb highs.

Losses of up to 6 between

The ideal scenario is that IBM is near $130 on April 24th expiation, if below the short call strike it will expire worthless and you will be left long the Sept 130 call for only $5.60 as opposed to the $7 it costs now. If the stock is at or above the 130 strike than the short call can be covered if you want to stay long the Sept 130 call. The idea of the trade idea is chip away at the longer-dated premium and set up for a rally later this spring. This trade idea risks about 4.5% of the stock price and would only be lost near term on an extreme move higher or lower than the current price or strikes of the trade idea.

To express a directional view via a long premium trade idea like this in weekly options into an event like earnings, you need to have conviction, because to just breakeven you need to get a lot of things right, directional magnitude of the move and timing.