This image from Jim Cramer’s Mad Money program had people scratching their heads over the weekend, the contrast between the explosive stock market rally and the massive increase in Americans who have lost their jobs. 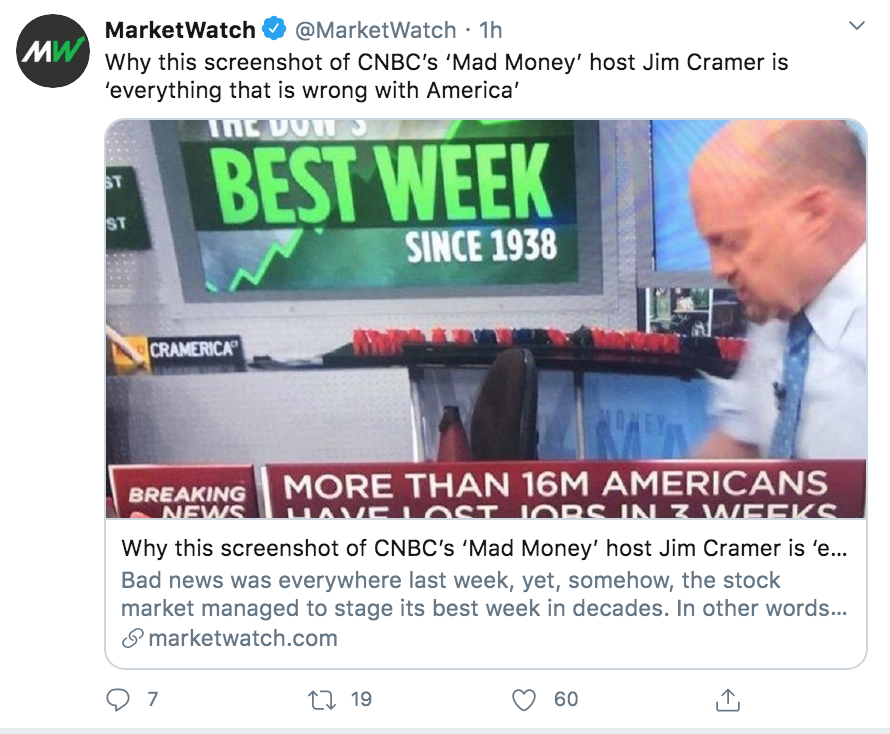 Jim has been nothing short of cautious (since late January) about the stock market since getting his arms  (well be fore most) around the health risk of the coronavirus spreading in our borders and the risks to the U.S.economy if we were to take serious steps to mitigate the virus’s spread. Don’t shoot the messenger here.

It is worth noting that the SPX found resistance last week nearly to the penny of where many technicians thought it might, at the breakdown level from early March, which was also nearly the midpoint of the range from the Feb 19th highs near 3400 to the March 23rd lows near 2200: 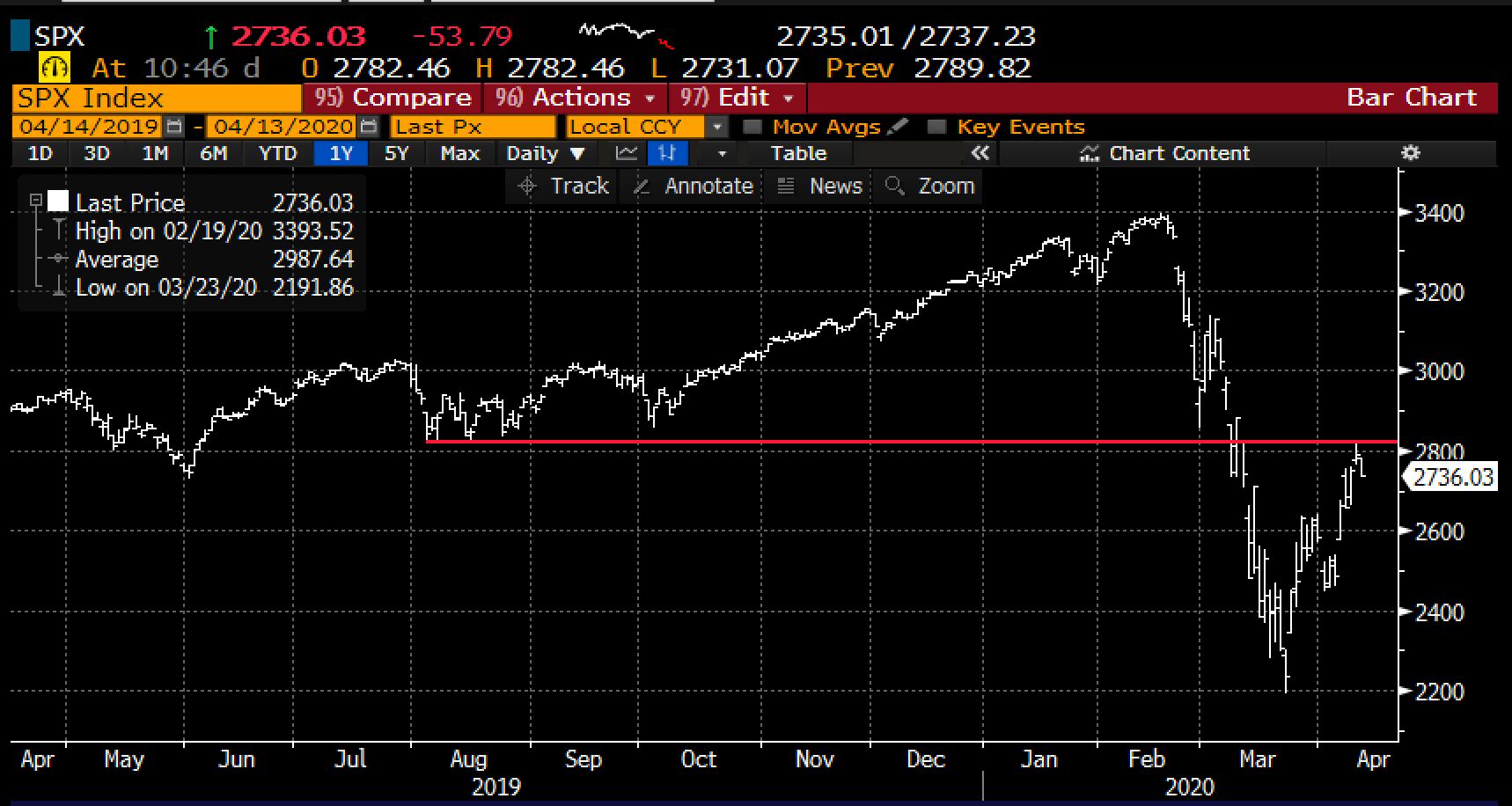 The last couple week’s price action in the SPX, the result of incremental better health news on the virus, and continued Fiscal & Monetary stimulus has caused Wall Street Equity Strategists to rethink their recent (consensus) bearish assumptions that had just switched from recent (near-consensus) bullish assumptions from just a few weeks prior (oh and Carl one of the best follows on Twitter) : 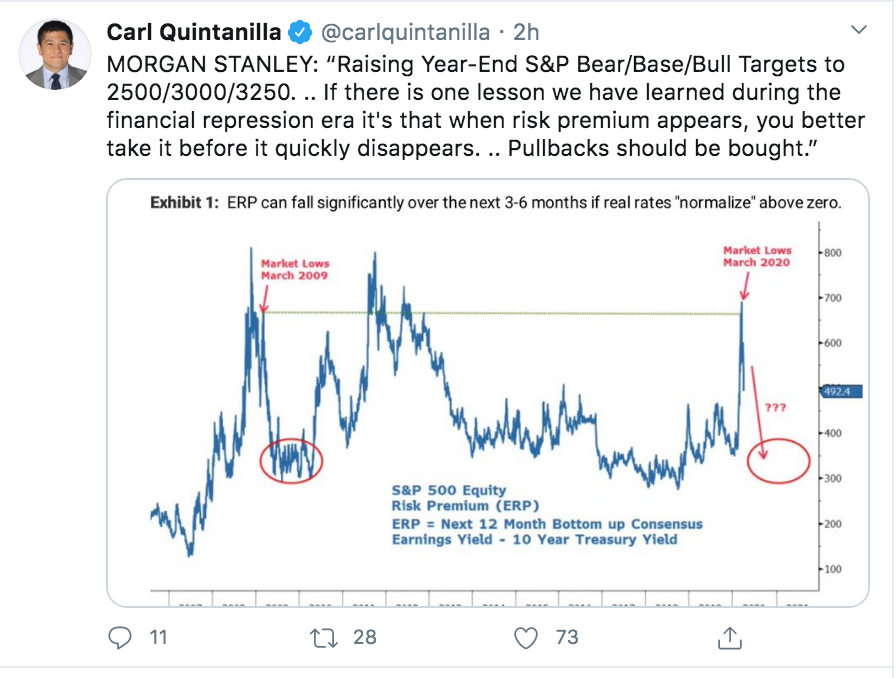 And my friend Ton Dwyer from Cannacord, who has chosen a more nuanced approach to the current environment, and to be very fair there are few strategists at banks that are as nimble as Tony with their ability to get in the cracks of what is really going on: 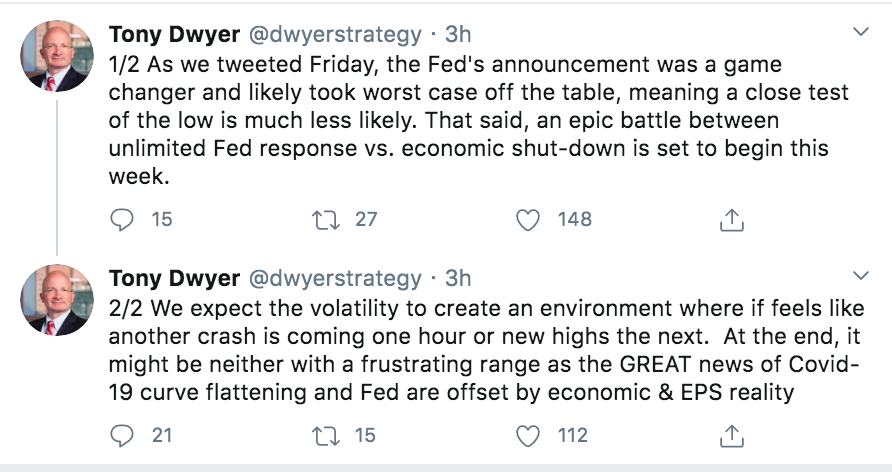 Strategists and those who make their living managing other people’s money have what they call in the business career risk if you get massive secular shifts in the market wrong and if you are off-sides for too long, ultimately costing investors return on the upside, well that’s the easiest way to lose your job.

From where I sit professionally, I don’t feel I have that same risk, I can call it the way I see it, here, on CNBC and on Twitter. I get called plenty of nasty things who want to mischaracterize my point of view, or the length in which I might hold that view, which doesn’t really bother me all that much. I think the most valuable offering I can have to viewers & readers is to do my best to pick apart the prevailing consensus view, even when visibility (on so many levels) is clear as mud, which is where we are today.

This stat from JPM research over the weekend caught my eye, and is consistent with my view that even with the current state of unprecedented monetary and fiscal stimulus, the recession that has likely already started, will be deeper and longer than most think, it will be global, consumers will have lasting changes in behavior, the way we work and play will be changed for some time, and the stock market in the last few weeks is entirely the wrong lens to evaluate the state of the health and economic crisis that we are faced with. Yes at some point the stock market will clearly discount the worst of what is ahead of us, but I fear that is a near impossibility after just two months, with less than 1% of the U.S. population tested for the virus. 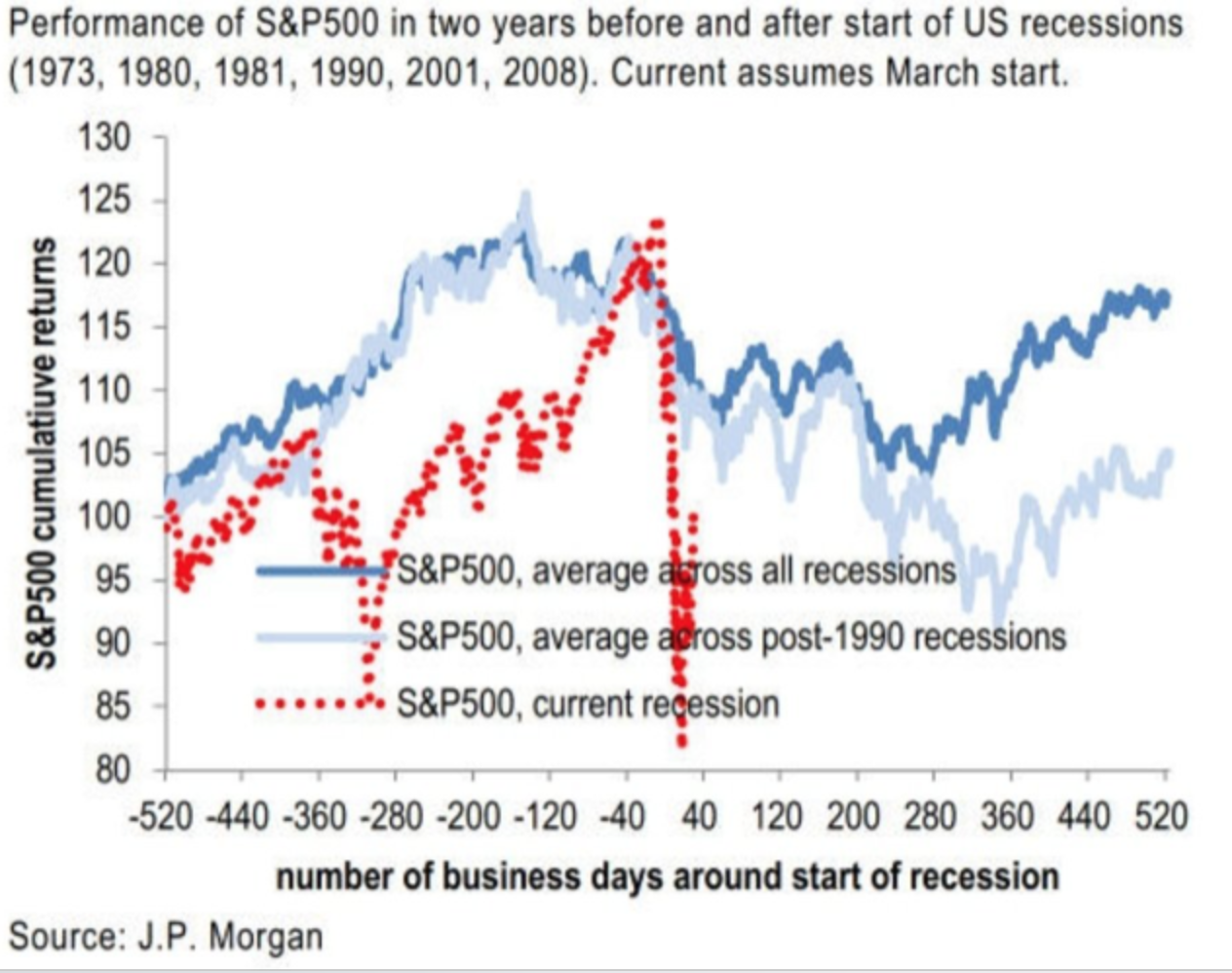 I have had a lot of substantive conversations in the last few weeks with many very accomplished professionals in all different fields, most share my worry about the damage to the economy and the worry that the frontloaded nature of the assistance and stimulus might mask the underlying weakness and vulnerability to economic shocks for months, if not years to come. Many think the SPX’s 27% rally from the March 23rd lows to Thursday’s intra-day highs were a gift to lighten up on equities. That is my view (read Thursday’s MorningWord: Re-Balancing…Act Now?). The consensus in the week after the first leg of the sharp rally off of the March 23rd low was that a re-test was a foregone conclusion, now after the second leg higher, and more Monetary stimulus and talk of never-ending fiscal stimulus, the consensus seems to be that the lows are in…and for that I’ll leave you with a tweet from Doubline Capital’s founder Jeffrey Gundlach view of the topic, consensus appears to be clear (and malleable) as mud: 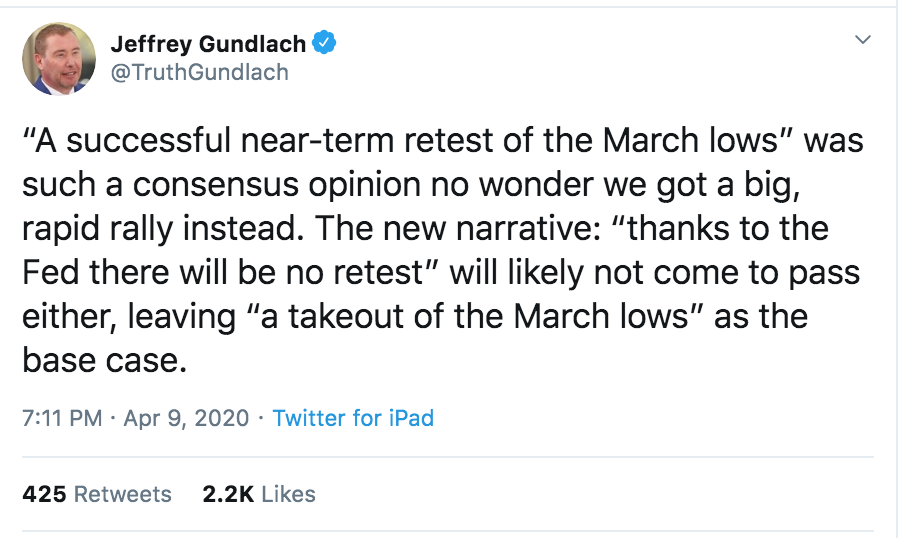