Regular readers of Risk Reversal know that I DON’T give investment advice, the trade ideas I detail on the site are just that ideas, and my thoughts on markets, economics and of course politics, are mere opinions and are not meant to dictate action, but to serve as just one input into your own trading and/or investing process. That said, I wanted to share some thoughts that I wrote this morning to a close family member who had expressed to me in January that she might be too exposed to equities, specifically growth stocks as more than 80% of her portfolio, managed by a large brokerage firm.

Disclaimer: These thoughts are not meant to induce panic, they are the results of our conversations about the lasting economic effects of the coronavirus pandemic and what it could mean for stock market returns over the next year, and specifically your exposure which you have suggested might be too great given your age and objectives.

Given the volatility in the stock market over the last two months, the 35% drop from Feb 19th highs in the S&P 500 (SPX) to its lows on March 23rd, and the subsequent 25% rally off of those lows it might make sense to reconsider your heavy weighting to U.S. growth stocks.

If you agree with me, that when we get past this first wave of the coronavirus that we will NOT be out of the woods on the health front, and that our economy is too remain impaired for months, if not quarters, then the recent bounce in the SPX is a response to the unprecedented sell-off that we had in March, on a near term basis, based on little visibility on both the health and economic impact, the market this past two week is saying it got overdone on the downside. But as we get more data about testing, therapeutics, antibodies, and vaccine, we will have more visibility on the impact on the economy, and the stock market will then very likely make another significant move. If health crises and lockdowns are perceived to be short-lived we will be headed back to highs. if it looks like we will have other waves of outbreaks and shutdowns with the economy running well below its capability with high unemployment then we will see the market go much lower over the next year.

The chart below of the S&P 500 shows 3000 as an important level to the upside, as it is there where it broke out in late Oct as a result of the Fed essentially staring quantatative easing (QE) again after they had already started lowering interest rates in July (for the first time in ten years). That was all BS, the 3000 to 3400 move to the highs in Feb. Purely Fed Liquidity induced… that was the way overshoot to the upside. The S&P found support at the breakout level that came right after the 2016 election. psychologically, that appeared to be a good spot where buyers came back as we roundtripped the entire “trump trade”. Now near 2800, we are at the exact midpoint of that range from 2200 to 3400. Something has to give, and maybe we get back towards 3000, but I’d be shocked if it holds and it would take a pure miracle of science, economics and a new new normal for the SPX to be threatening new highs anytime soon in my opinion. 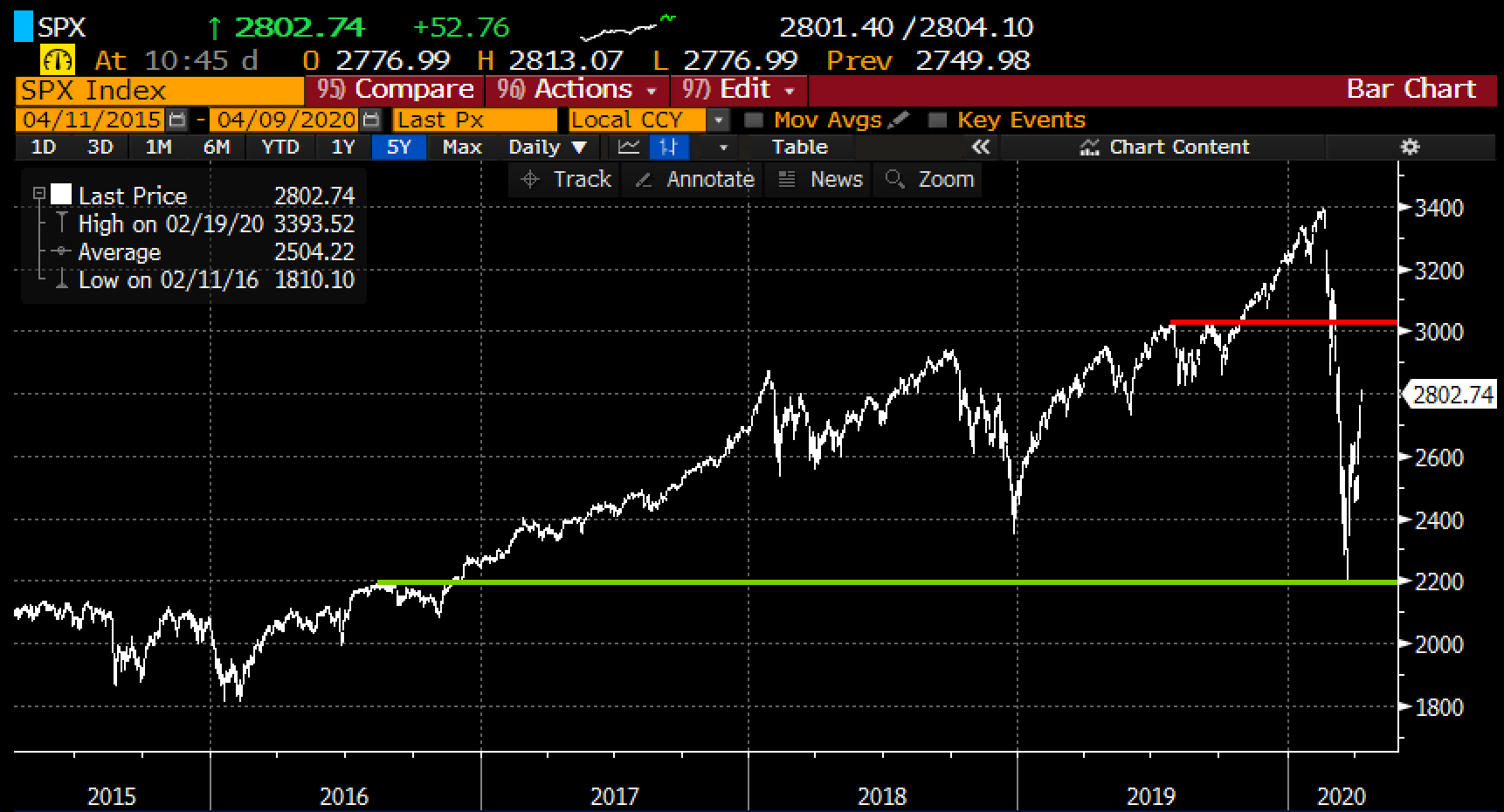 .
I want to be optimistic that the virus will go away, I am not, I have no confidence in the federal response, specifically, its leadership (or lack there-of) and their ability to get better, to learn, to lean on science and show a bit of empathy towards those effected… and that is not just confirmation bias, all the data suggests we have blown it. As for the economy, the Fed, Treasury, and Congress have thrown everything they have at the financial assistance needs, but we will need waves of stimulus and this will take time. Unemployment will stay high for a while as companies will realize efficiencies during the lockdown, be forced to make layoffs in the second half of year due to lack of demand as consumers will be forced to de-lever and change spending habits… and many small businesses will sadly not come back.
.
If you thought you were overexposed to equities 2 months ago, and we had that conversation, prompted by you, this rally, placing the S&P 500 down 15% on the year and down 18% from its all-time highs in Feb should be viewed as a gift. Yes u will be locking in losses this year, but the SPX was up 30% last year, and there was NO earnings growth in 2019, and SPX earnings are going to be down significantly this year, so I am not sure current valuation multiuples will be sustainable based on the recent rally based on the trajectory of earnings.
So given the Fed’s insistency on zero rates (they are never really going up again in my view, see Japan over the last 30 years) then rebalancing to 60-40 or 50-50 might make a lot of sense starting today and on any continued near-term strength. Bonds have been a great hedge against equity volatility since late 2018 and but also on an absolute basis.
Given the issues we face, imo capital preservation will be more important over the next year than trying to catch BS liquidity induced rally from here.
Remember the last two recessions (2001 & 2008) were marked with 50% declines in the SPX, I would say that what we have here with a health and economic crisis is worse than the prior two crisis combined and the tools we are using to combat economic and financial crises are becoming increasingly strained, not to mention our ill-preparedness to deal with a health crisis.
.
TL;DR: If you are worried that current health and economic crisis lingers for next year, then stock market will make new lows from last month and the recent bounce of 25% off of the lows is presenting an opportunity to get more defensive. Capital preservation should be top of mind in this environment.