On March 16th, despite expecting lower lows in shares of Starbucks (SBUX) I attempted to lay out a thesis on the stock that was constructive coming out of the other side of the current crisis (see below)… the premise was to look at a high-quality consumer discretionary stocks that have been hit much harder than the market from its highs but are likely to see a sharp snap back when we get back to some sort of normal consumer behavior.

While the recent low at $50 appears to be massive long term technical support: 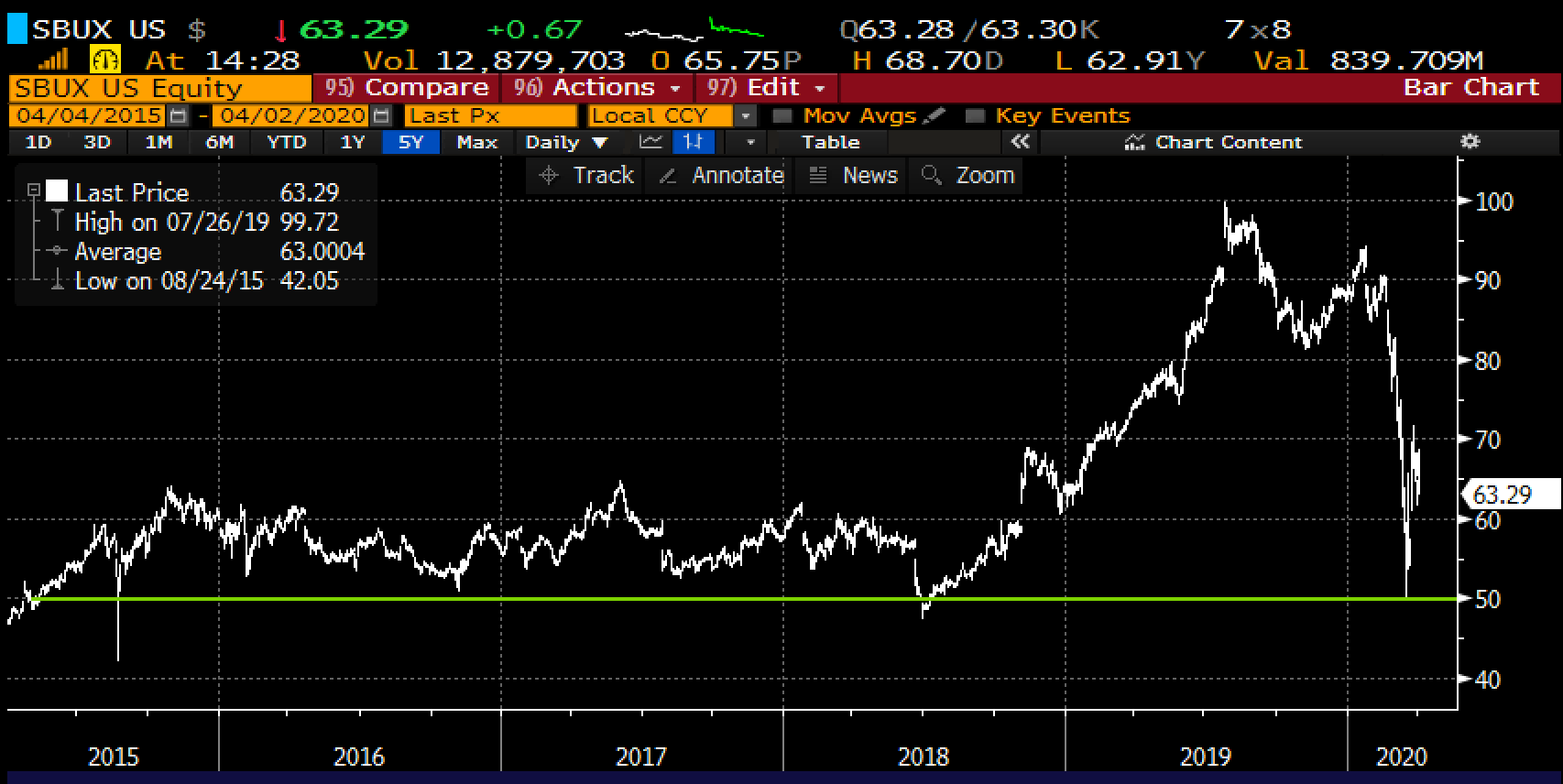 And as one might expect, this continued volatility has kept options prices elevated, but off of recent multi-year highs:

Last night on CNBC’s Fast Money we discussed some of the efforts SBUX is making to keep their employees employed with benefits and discussed the stock’s recent price action:

On more than a few occasions of late, some smart investors have indicated to me that they want to buy SBUX, they are not sure on timing but want to use the recent weakness to establish a long position with a long-term time horizon.

I am of a few different minds of how to do this based on one’s style and comfortability using options as an overlay to stock or using options to replicate long exposure. Let me explain:

Long Stock (no comfort with options):

Dollar-cost average your position from here with the understanding that if the broad market were to re-test and break last week’s lows, and if the lockdown in Europe and the U.S. are to last longer than the next month, then you will be averaging lower, easily back towards $50.

Take advantage of the elevated levels of implied volatility and look to sell shorter-dated out of the money calls to help finance the purchase of a longer-dated call of the same strike, for instance:

The ideal scenario is that SBUX is near $70 on May expiation, if below the short call will expire worthless and you will be left long the Oct 70 call for only $3 as opposed to the $6.40 it costs now. If the stock is at or above the 70 strike than the short call can be covered if you want to stay long the Oct 70 call. The idea of the trade idea is chip away at the longer-dated premium and set up for a rally later in the year.

All of these strategies attempt to give long exposure in SBUX, the long call calendar offers the best-defined risk way to do it, while the long stock long strangle offers the highest probability of success, and dollar-cost averaging, well that is left in your hands when to pull the trigger on the way down.

In my continuing Shopping Cart series, looking at stocks of high-quality companies that have been hit hard but have the strong likelihood to rebound hard when we get some visibility on just how long the global economy will be under extreme stress. Without visibility, most consumer-facing companies like Starbucks (SBUX) will likely continue to make lower lows.

Shares of SBUX are down 28% on the year, vs the S&P 500 (SPX) which is down 20%, One reason for this underperformance is their exposure and growth expectations in China, and the guidance they gave about the region on March 6th, per Credit Suisse on March 6th in a note to investors:

Since then we have seen Italy, Spain, and France go on full lockdown and the U.S. this past week has been pushing hard social distancing. Analysts have been aggressively lowering eps growth forecasts, as of now expected to be flat in 2020, which will easily be down when it is all said and done:

The analyst consensus is still calling for a 5% YoY revenue growth will likely be revised lower when you consider that a hypothetical 10% revenue decline would equate to a 20% YoY decline from current expectations:

Stocks like SBUX that normally trade at a premium to its peers and certainly the broad market will be made to look very expensive as numbers get slashed but savvy growth investors who have a sense for valuation, specifically those who prefer to pay up for growth… at a reasonable price (GARP) will likely start to dip their toe’s in the water down 50% from all-time highs. It is worth noting that a 50% peak to trough decline from last summer’s all-time highs is at the low end of the massive consolidation range from early 2015 to late 2018. 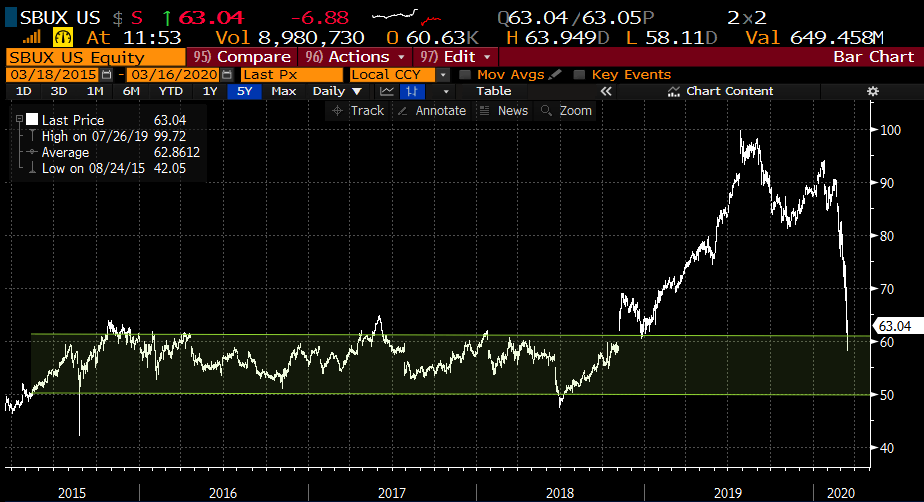 So trying to buy the stock here, despite the extreme oversold short-term nature seems like buying a falling knife given all of the unknowns of their business, if the company were to close all stores as Apple (AAPL) just did then where is the bottom for this stock, does I have a 4 handle on it?? Picking bottoms can be messy work, using options to do so to better define risk can be useful took in your tool-kit, but make no mistake, buying options to do so can be hard, and selling options outright can be risky business. Look at 30-day at the money implied vol (the price of options) at 80%, down from last week’s highs at 90%:

Call calendars will make sense in this environment, selling an out of the money short-dated calls helping to finance the purchase of a longer-dated call of the same expiration. On March 5th I detailed a similar strategy in Disney (DIS), read here.

Stay tuned. SBUX is in the cart.