Yesterday In my In The Money series with Fidelity Investments I detailed a bullish trade idea in the ETF that Tracks the Utility sector, XLU. My thought process was simple, in the sell-off in the stock market since the highs in mid-February we. have seen correlations among stocks and sectors go up dramatically, meaning that those sectors deemed to be safe-havens in rocky times have not been spared, and in some cases like the XLU, it got hit harder than the S&P 500 (SPX), at its lows Monday down nearly 40% vs the SPX down about 34%. 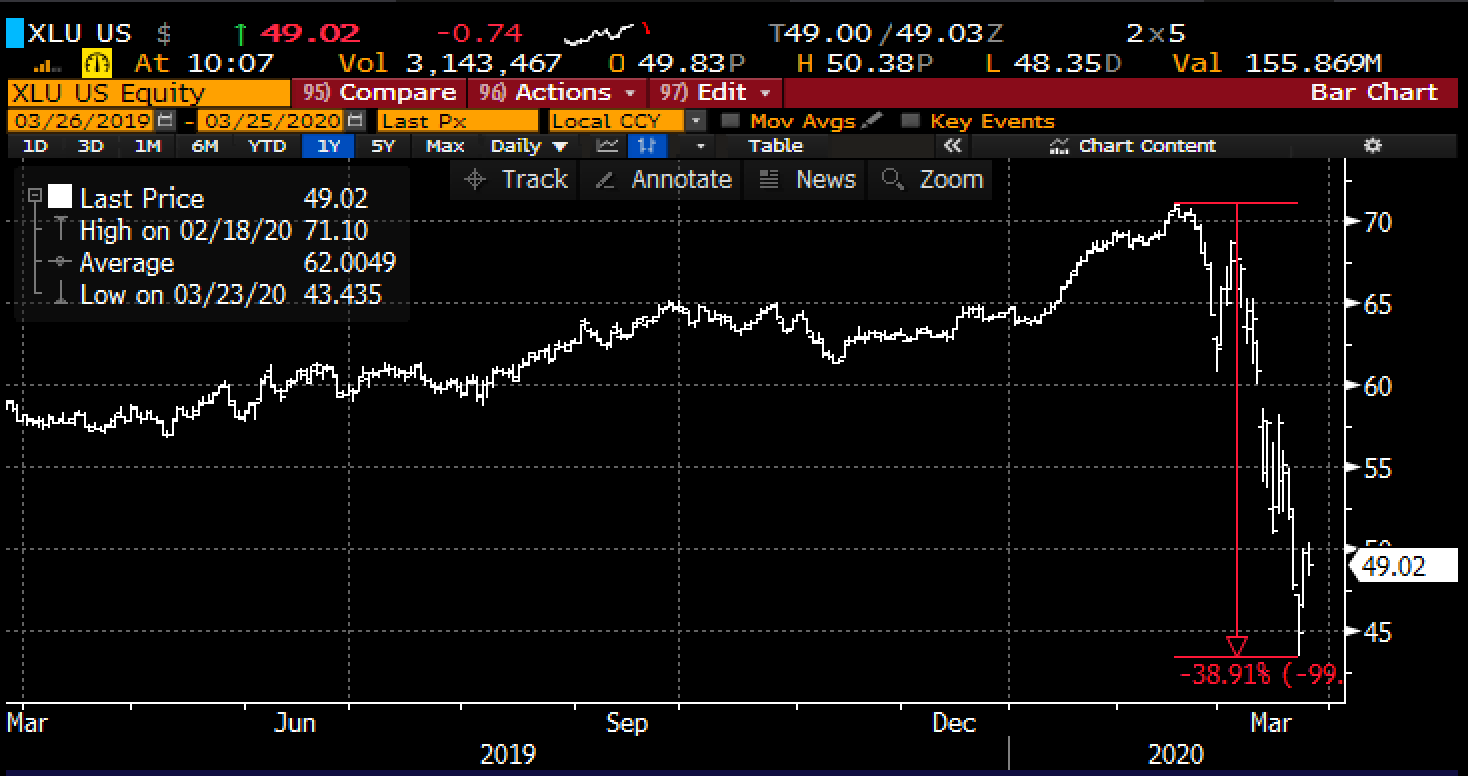 That sort of price action suggests a very violent liquidation that is likely to go back the other way a bit.

In late January I highlighted just how weird it was that the two best performing sector ETFs in 2020 were mega-cap tech (XLK) and utilities (XLU):

Dog and cats living together… Mass Hysteria—-> Utilities $XLU and mega-cap Tech $XLK are the two best performing sector etfs ytd. Are they both defensive? If so why now? Maybe a sign the market is headed for a disaster of biblical proportions in 2020?https://t.co/KxJe99Xp1Q pic.twitter.com/AR9LwRJAZb

What struck me at the time was that both were deemed to be defensive but it is astounding that the XLK has outperformed the XLU on the sharpest market decline in the shortest amount of time in history.

I suspect markets will stay volatile over the next few months as they will NOT bottom until we have mass testing, get visibility one when the virus will peak, and start to get a sense when people can come out of their homes and go back to work. This will have to coincide with the extreme steps the U.S. Fed has taken on monetary policy to keep on financial systems running smoothly as we wait for the first wave of fiscal stimulus (hopefully passed by Congress and signed by trump this week) to kick in.

In the meantime, I expect to see the sort of price action that we got this week in gold to seep back into other “safe haven” risk assets following liquidations.

Call Spreads in XLU looking out a few months look attractive to me.

Markets rally on good news. This week on #inthemoney, our collaborative series with Options Strategist, Dan Nathan, we discuss a play for a bounce where investors may begin to see some value: https://t.co/pUMQ5EbHzm pic.twitter.com/nXNbIVEcWJ

Here are my show notes from yesterday morning:

-In Jan and Feb XLU, thought to be defensive were rising precipitously as it appeared some investors were nervous with the pace of stock market gains…

-XLU now getting destroyed… total liquidation, down more than the SPX from the highs…

-If you think things stay rocky in the coming months, look to play XLU for a bounce and investors may start to see value in a staple, that also is deemed to be defensive.

I also gave an update on the GLD call spread from last week, here was the trade idea from 3/17/20:

Options, take half off and let other half ride, or roll up and out with a portion of the profits.

Rolling some of the profits up to a new call spread makes sense in my opinion, which could look like the June 155 – 170 call spread.