So the Goldman Sachs folks are chirping in their old crony, current Treasury Secretary Steve Mnuchin’s ear about re-opening the economy before we have any clarity on when coronavirus cases might peak in the U.S.:

Is it time to start discussing the need for a date when the economy can turn back on? Policymakers have taken bold public health & economic actions to address the #coronavirus, but businesses need clarity. Otherwise they will assume the worst and make decisions to survive.

Extreme measures to flatten the virus “curve” is sensible-for a time-to stretch out the strain on health infrastructure. But crushing the economy, jobs and morale is also a health issue-and beyond. Within a very few weeks let those with a lower risk to the disease return to work.

WE CANNOT LET THE CURE BE WORSE THAN THE PROBLEM ITSELF. AT THE END OF THE 15 DAY PERIOD, WE WILL MAKE A DECISION AS TO WHICH WAY WE WANT TO GO!

All of the infectious disease experts, the ones whose only job is to flatten the curve of infection, the ones working on the health crisis strongly disagree with this until we have mass testing, are able to separate the sick from the cured and healthy and have some visibility on when infections peak and what current drugs might be used to treat the virus and when we might have a vaccine. I don’t have anything to add aside from the fact that I am fine to be in their hands on any and all health issues. As for the disease impacting the economy, I am sympathetic to the notion of the cure to the health crisis being worse than the disease as it relates to our economic wellbeing, but we are already down this path, and to pivot prematurely for what I would assume are political reasons from the White House is not worth the risk of prolonging the outbreak leading to more economic shutdowns in the future. I was on MSNBC yesterday to discuss this issue:

I am not an epidemiologist or an economist but in this case, where we are now, seeing what has worked in China, South Korea, and Germany vs Italy, I am hard-pressed to see how we do not stay the course for a bit longer than what the bank CEO class think.  I don’t mean to give them too hard a hard time, I know they deeply care about this country and our people, I hope they are using what influence they have privately to push both Dems and Rs in congress to get the first (of what will likely be many) Financial Assistance package approved and signed by the President so money can get straight to displaced workers AND large corporations to help avert mass layoffs. Once that happens we can “start discussing” then it might be safe to reopen. The combination of a rolling health pandemic and a massive recession due to mismanagement from the top down will cause fissures in the social fabric of this country for decades to come.

It is interesting that just last week there were public cries, literally cries by billionaire hedge fund managers to SHUT IT ALL DOWN, HELL IS COMING!!  Which frankly felt a tad more offsides than those calling for pre-mature repo

“If you’re looking for how to weather this humanitarian and health crisis, then don’t listen to guys like Bill Ackman.” @RiskReversal gives us his take on the billionaire investor’s comments today. pic.twitter.com/WNN0HYcWOp

As for markets, this chart plotting Coronavirus cases and deaths in the U.S. which this year has obviously gone from the bottom left to the top right vs the S&P 500 (SPX) and the 10-yr U.S.Treasury Yield which have gone from the top left of the bottom right highlights what might be the trade of the year, once we flatten the curve, have some visibility when this will peak, and how long we are from a vaccine, then the stock market can bottom, and yields find a sustainable level without the fear of going negative. 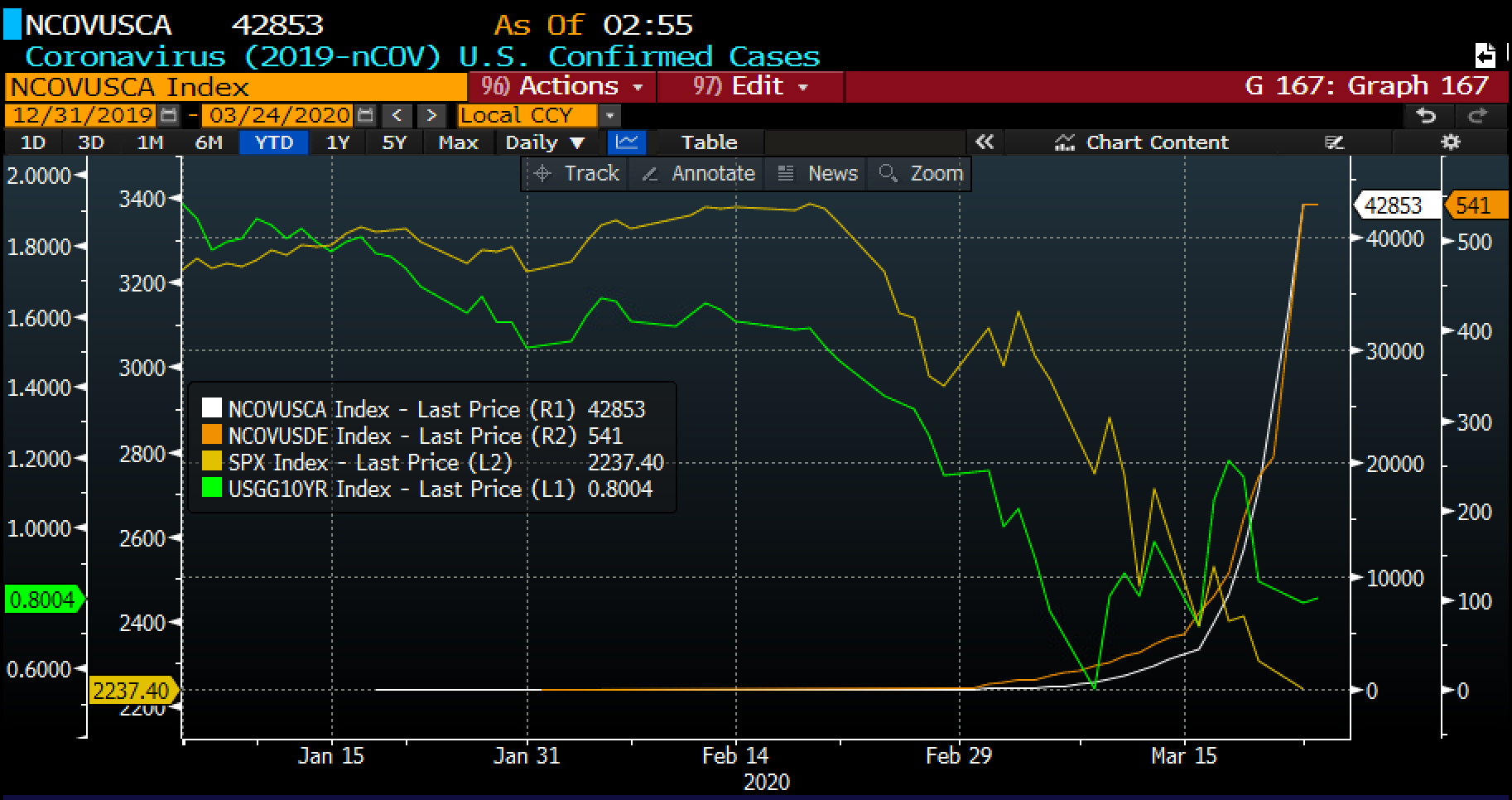