Last night I had a conversation with a friend who is long Zoom (ZM), he bought it on its first day of trading back in mid-April, not at the $36 IPO price but on the POP, the low of the day near $60. Interestingly, throughout much of the volatility that most other 2019 tech IPOs faced for much of the year, shares of ZM held the opening day’s low in Oct & Dec, prior to becoming the IT stock for the work-from-home crowd in 2020: 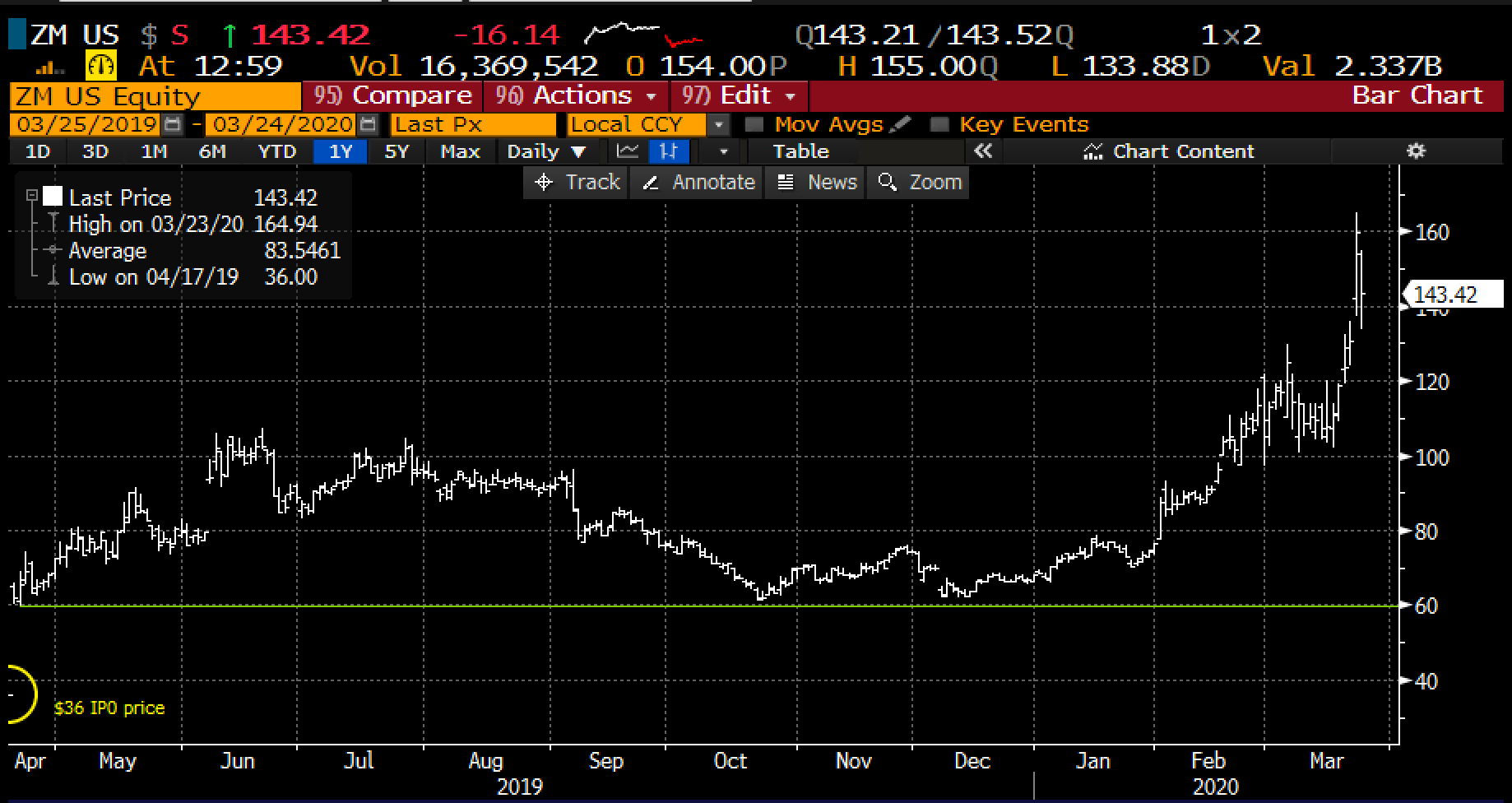 One big reason for the relative out-performance to many of its recently IPO’d tech-brethren, and it’s not just explosive sales growth, 4xpected to top $1 billion in the current fiscal year (up more than 30% that will surely be light given recent download expectations):

But Profits and on a GAAP basis, they have them…and given the earned media from the coronavirus, their 81% gross margins are likely to go up.

Zoom is a great product like you probably have been a user of late. The management seems to be extremely disciplined and focused on their mission. From purely a sentiment standpoint it is hard to not like love the story. But as stock it is challenging, trading at about 43x trailing sales, sporting a $40 billion market cap. No one can buy them as they would have to pay a 30-50% premium which would make one of the largest tech M&A transactions ever above $50 billion. When investors seem panicked about a prolonged work from home scenario they sell most stocks and buy ZM, Slack (WORK), Box Inc (BOX), Citrix (CTXS) and Netflix (NFLX), which are all down expected WORK (which is only up 4% to the SPX’s 8% gains).

All that said, I have no idea where ZM deserves to trade in this unprecedented environment, especially when you consider the valuation malfeasance in both private and public markets have the last few years. But my friend who is very happy with his return in less than a year said to me that he is too long the stock (meaning the position is too concentrated in his portfolio), probably a combination of most other stocks losing their value and ZM doubling this year. He has considered hedges like collars (selling an out of the money call and using the premium collected to finance the purchase of out of the money puts, creating room to the upside for gains, but defined risk down to the long put strike) but he also uses good til cancel sell orders above the market. As soon as he said that I said: “WAIT!… have you been elected on those orders??” His answer was a simple yes… my answer is that I have a very easy way to get paid to put a good till cancel sell order, and that is to Sell 1 call per 100 shares long at a strike you would be willing to sell the stock at by a certain period of time. For instance…

With the stock at $143 as I write, if you were going to put a good till cancel sell order in with your broker for 100 shares at $180 on May expiration, that would be up nearly 26% from current levels, then you could sell 1 May 180 call against 100 shares of stock at $11.If the stock was below $180 on May expiration than you would receive the $11 in premium, creating an $11 buffer to the downside.If the stock is $180 or higher, where you were already going to put in a good till cancel order than your 100 shares would be called away, but when you add the $11 in the premium you received for the call sale the real Callaway level at $191, up 33.5% from current levels in 2 months.

This is a no-brainer of an option strategy for those who drop random sell orders on their brokers for stocks they own.